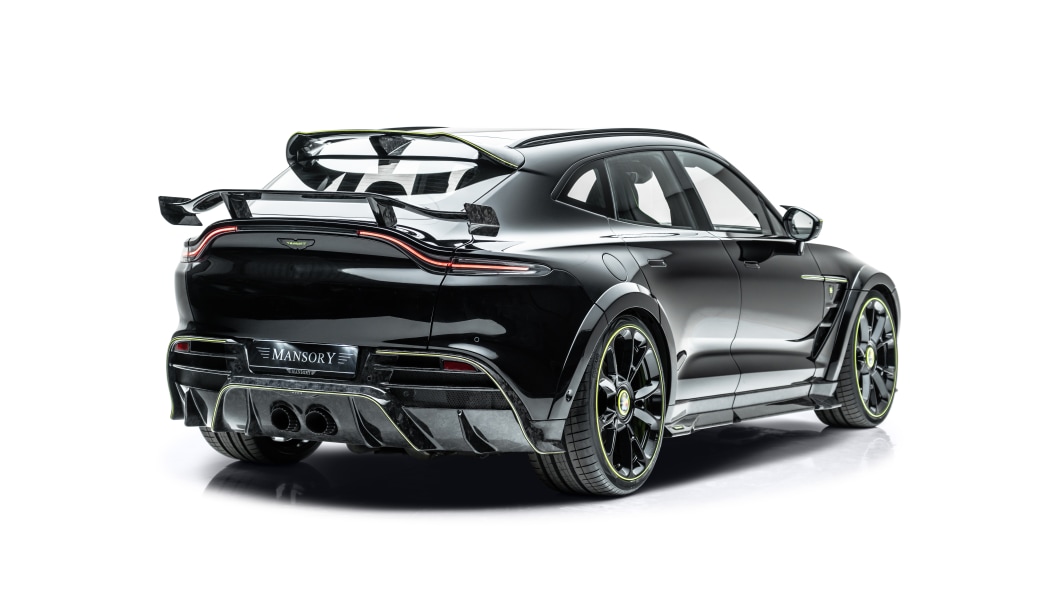 Subtlety, thy name is most definitely not Mansory. The German tuner has revealed its latest subject, an Aston Martin DBX outfitted with the company's signature gaudiness. If you can look past the visual assault, however, the car is notable for being the first tuned DBX.

Mansory modified the Aston's AMG-built twin-turbo 4.0-liter V8 engine with a new ECU, bigger turbos, and reworked exhaust. That transforms the already powerful DBX from a 542-horsepower 516-pound-foot SUV into an 800-horse, 738-pound-foot behemoth. A shield-shaped badge reads "Mansory P800 Performance" just in case you have any doubts about its output, but nowhere is this alphanumeric sequence mentioned in its press materials. Mansory claims a 0-62 time of 3.8 seconds and a top speed of 202 mph. Brakes and wheels are not discussed either.

The firm also claims that many of the aerodynamic changes are necessary to keep the DBX grounded as it reaches supercar speeds. Those include a widebody kit with pronounced fender vents, a front fascia that offers more openings than the Washington Generals, and the rear diffuser gives customers the choice of two placements for the dual exhaust. One places the tailpipes on opposite sides of the rear fascia, and one puts them side by side in the center.

Many of these bits, including the side skirts, are made of forged carbon. We know it's supposed to be lightweight, modern and expensive, but we can't help but think they end up looking like the basic granite countertop in a Zillow flipper. You also may have noticed that the Mansory DBX has not one, but two elaborate rear wings. Each is made of forged carbon, and each also looks like a Klingon ritual battle weapon.

You can have the Mansory DBX in any color you want as long as it's black with lime green. While the DBX's exterior isn't overly saturated in textmarker grün, the same cannot be said for its cabin. There, a dizzying pattern of chartreuse AM grilles on the seats, door panels and center console give life to the nightmare scenario of being trapped inside a Magic Eye poster.

If you really have a jones for a faster DBX, may we recommend that you wait for the upcoming V12, which will likely retain Aston Martin's traditionally elegant styling. The DBX may have saved Aston Martin from financial ruin, but let's not ruin the DBX.