Aston Martin DB5s from 'No Time to Die' sampled by Carfection 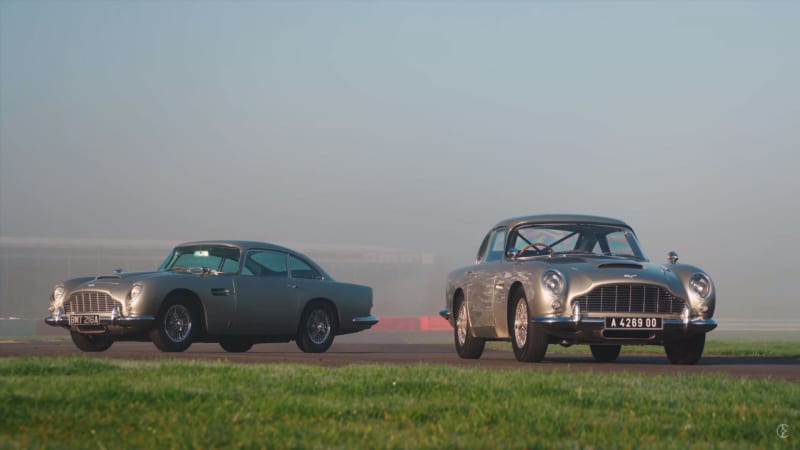 The excellent Henry Catchpole might have just made the most persuasive argument for restomods using one of the world's and pop culture's most celebrated classics. The Carfection host spent a day at Silverstone with no less than four takes on the Aston Martin DB5 — one of them the showstopping original in gleaming Silver Birch with the license plate BMT 216A, three of them stunt cars used in the next James Bond installment "No Time to Die." Catchpole starts off in the stock vintage two-door, its 4.0-liter straight-six sending about 282 horsepower and 287 pound-feet of torque to the live rear axle to move about 3,300 pounds. It's a thrill to run through apexes, but perhaps more for its pedigree than its prowess; at one point, Catchpole wonders, "How on earth he did some of those car chases with seats like this, I've got no idea." Of course, Bond only had to outrun a couple of even older Mercedes sedans in "Goldfinger."

The host then slides into the shotgun seat of one of the ringers, with one-time Subaru-driving rally ace Mark Higgins behind the wheel. Higgins has been a stunt driver in four Bond films now, starting his tenure in a Land Rover Defender in "Quantum of Solace," working his way up to drifting the one-off Aston Martin DB10 at around 90 miles per hour through St. Peter's Square in The Vatican. Higgins explains a bit of what went into the DB5-looking stunt cars built for "No Time to Die," one of them built on a ladder frame chassis dressed in carbon fiber body panels, powered by a modern straight-six engine, suspended with Öhlins dampers. The directive was to get repeatability in tricky environments, and hey, more power and less weight is never a bad thing, either.

When Catchpole takes the track again behind the wheel of the stunt car, you'll want to turn on the closed captions. Even if you don't, Catchpole's barely audible exclamations and facial expressions make it clear which car he'd rather take home, and which he'd leave for the "misogynist alcoholic womanizer of a secret spy with really pretty unresolved violence issues." If all goes well, we'll see both in action — plus two more — when "No Time to Die" hits theaters in November.