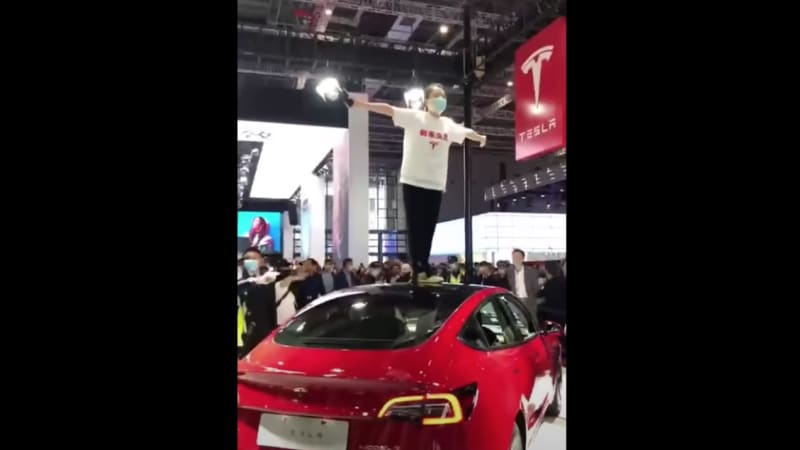 SHANGHAI — An unhappy customer who invaded the Tesla booth at the Shanghai auto show by clambering atop a car in protest, creating a social media stir, will be detained for five days, Shanghai police said on Tuesday.

Police said the woman and a female accomplice — identified only by their surnames, Zhang and Li — "caused chaos" at the trade fair on Monday when they arrived at the Tesla display "to express their dissatisfaction due to a consumer dispute."

Videos that went viral on Monday showed Zhang wearing a T-shirt emblazoned with the words "The brakes don't work" and shouting similar accusations while staff and security struggled to calm the scene. She said she was driving her Tesla Model 3 with her family aboard when the brakes failed.

Tesla sells roughly 30% of its cars in China, which are made at its Shanghai factory, but has come under occasional criticism in the country over issues such as complaints of battery fires.

In a statement published Monday afternoon on China's Twitter-like Weibo, Tesla said the woman was a vehicle owner who had been involved in a collision earlier this year. Tesla cited "speeding violations" for the crash, adding it had been negotiating with the woman about returning the car but talks had stalled over a third-party inspection.

Zhang and Li could not be contacted for comment.

Tesla later published another post saying it would take responsibility for any problems with its products, including paying for damages and any related fines.

"At the same time, what we need to explain is: not compromising with unreasonable demands is also our attitude."

The incident continued to attract social media attention on Tuesday, accounting for two of Weibo's top 10 trending topics. And a commentary on state-run CCTV said the Chinese government should call in a third-party testing agency to address complaints over Tesla vehicles.

Tesla is making Model 3 sedans and Model Y sport-utility vehicles at its Shanghai factory. Last month it sold over 35,000 locally made vehicles in China.