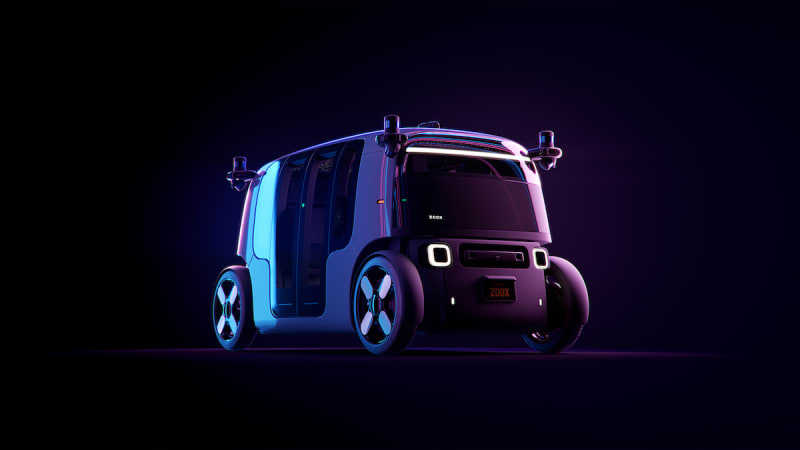 Amazon's Zoox subsidiary has pulled the wraps off its first autonomous vehicle. Billed as a car "built for riders, not drivers," the all-electric box on wheels eschews traditional controls, traditional seating and even traditional notions of a front and back.

The Zoox, not to be confused with Japan's Kei Car of the Year Nissan Roox, is bi-directional, with each end the same, so it can easily reverse direction. Four-wheel steering allows it to maneuver in tight urban spaces. Its footprint is tiny, only 11.9 feet in length, though that's still a bit larger than a 11.2-foot Roox (and by extension, all kei cars).

Doors on either side slide open to a carriage style seating arrangement, so passengers sit on benches facing each other. There's no steering wheel or pedals, just hospital-green upholstery that looks, thankfully, easy to disinfect. The ceiling has a Rolls-Royce-esque starlight headliner surrounding a central fixed glass panel. Naturally, there are smartphone chargers and infotainment screens that tell you about your trip and destination.

The Zoox is powered by a 133-kWh battery that the company says can withstand 16 hours of continuous use before recharging. Top speed is an impressive (for an autonomous box) 75 mph.

Safety is a priority. "[It] is the foundation of everything we do," Zoox CTO and co-founder Jesse Levinson said in a statement. Armed with a suite of cameras, radar and LIDAR sensors, the Zoox has a 270-degree field of vision that is said to eliminate blind spots. It can track other moving objects, including cyclists and pedestrians, in its immediate vicinity. It also has an airbag system that accounts for a bi-directional vehicle and a claimed 100 safety innovations that typical cars don't have.

The vehicles are currently being tested in San Francisco, Las Vegas and the company's hometown of Foster City, California. Zoox hopes to launch a ridesharing app soon, but there's no word on when we'll start sharing the road with the robo-carriages.

Zoox was acquired by Amazon in June of this year. The online retail juggernaut has expressed interest in autonomous vehicles that can help it deliver packages to customers. So who knows, you could soon be riding alongside an InstantPot, inkjet refill cartridges, and a box set of The Office.