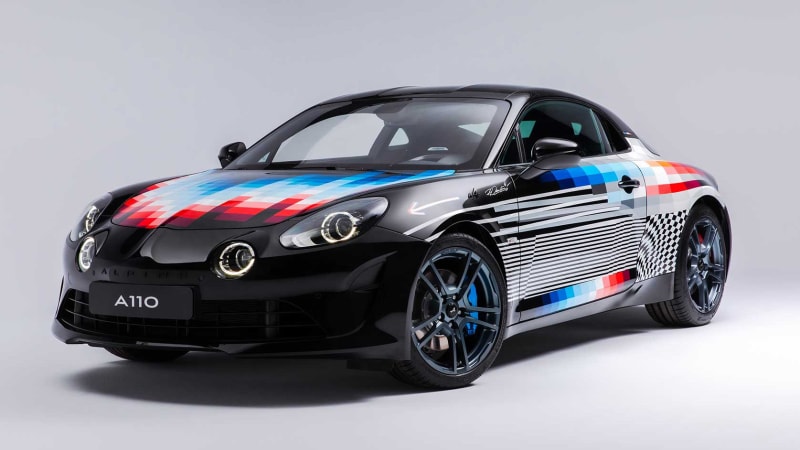 The Alpine A110S is a tough position. It's an excellent sports car, but doesn't get much love because it's not as flashy as some of the current crop of new supercars, nor does the name carry the street cred of the newly rich crypto bro's favorite, a "Lambo."

“My idea regarding the work on the A110 is to evoke a sense of 'ultradynamism'," Pantone explained. "Visual speed is something that I have been investigating for years now and that I feel it really comes together on this car, emphasizing it’s brilliant design with a fast, technological look."

The graphics heavily feature a pixelated look formed by blue and red rectangles of varying shades. Even the brake calipers take on this color scheme, with blue units up front and red ones at the rear. Staggered white stripes along the sides and a checkerboard pattern on the rear flanks evoke a (perhaps very) subtle feeling of motion and racing. The pixel motif continues onto the rear deck, adding green to perhaps recall a digital screen.

On his website, Pantone describes his art as "a collision between an analog past and a digitized future, where human beings and machines will inevitably glitch alongside one another in a prism of neon gradients, geometric shapes, optical patterns, and jagged grids." That certainly describes Alpine's livery.

As far as art cars go, it's fairly cohesive. The lines feel like they've been designed with the shape of the underlying car in mind, rather than a work of art that's just been draped over the sheetmetal.

The Pantone Alpine will retails for a jaw-dropping €125,000 ($152,000 USD) including tax, a significant increase over the regular A110S model's approximate $75,000 price tag. There are no performance upgrades to its 292-horsepower turbo V6, but it looks faster. The car was revealed officially yesterday at the Monaco Grand Prix alongside Alpine's F1 cars.