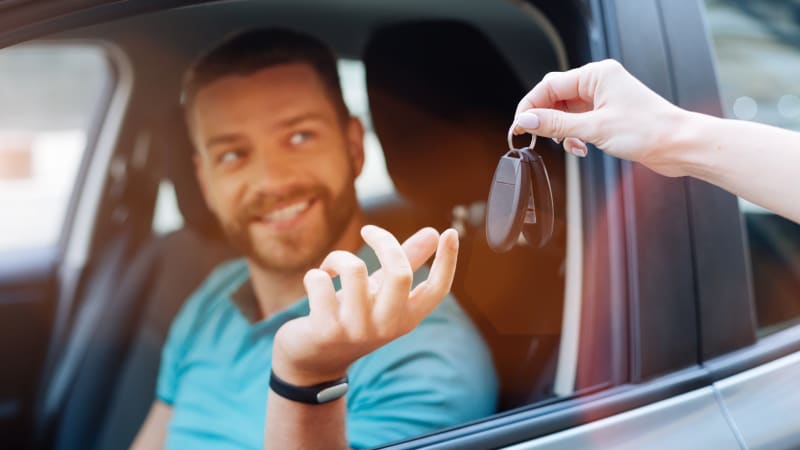 If you’d like to try your hand at driving for Uber and/or Lyft, but don’t have access to a vehicle, we have plenty of resources for you. Both companies offer a variety of vehicle options. And there are lots of third-party companies popping up all over the country that are creating even more options for drivers. But first, let’s take a look at some serious mistakes drivers can make when it comes to getting a car for rideshare driving.

Without a doubt, the biggest mistake we see drivers making is when they get trapped into a long-term commitment to a car that’s too expensive. Many drivers overestimate what they can make doing rideshare driving, and they underestimate how many hours it will take to make it. A lot of drivers have gotten trapped into lease and rental contracts where they ended up having to work 14-16 hours a day just to make the payments. The worst is when drivers get into multi-year agreements that work out fine right now, but a few months down the road Uber and Lyft lower driver pay, making it harder and harder for them to make the payments.

We don’t want to see that happen to you, so our best advice is don’t get into any commitment that’s longer than a year for a vehicle if your sole purpose for using the vehicle is to drive for Uber and Lyft. That’s because you never know when Uber and Lyft might lower their rates and make it nearly impossible for you to make the payments that were initially very doable.

We also recommend that you rent, lease or borrow a car that you can get into for no more than a 30-day commitment and try rideshare driving for a month before making any commitments longer than that. Many surveys have found year after year that Uber and Lyft lose half of their drivers every year, so it’s really not something people should make a long-term commitment to until they’ve really put some time into it checking it out.

You should also test it out for at least 30 days so you’ll have a much better idea how much you should be willing to spend on a vehicle. Don’t rely on what other local drivers tell you about how much they make. Drivers are often less than truthful about that, as they have many different reasons to mislead others. They may tell you they’re making more than they are so you won’t think they were dumb for getting into this business. They might tell you they’re making less than they are hoping to discourage you because they don’t want more competition on the road from other drivers. Some may tell the truth, but many have better reasons to mislead you.

Once you find out how much you can make, we recommend looking for a car deal where your weekly payment will be less than half of your average income during your test-drive weeks.

We’re still seeing a few lease deals where drivers are being charged up to $700 a week for a vehicle. We’ve seen this in New York for the luxury high-end SUVs. If you drive five days a week that comes to at least $140 per day. You’d need that car to consistently pump out at least $300 a day for that to begin to be worth your time, but with the very low rates Uber and Lyft are paying today, even for SUVs, it would take around eight to 10 hours of driving each day just to cover your car costs. Even if you drove seven days a week, this would cost $100 per day and take pretty close to a full 10 hours of driving to cover, and that’s before you start to make anything for yourself.

To put it another way, it is estimated that drivers earn on average between $13 and $16 an hour nationwide. So, let’s say you’re earning about $15 an hour, and you’re renting a car that costs $700 a week and you plan to drive 50 hours a week. You can see, you’re not going to make very much. The cost of your car comes to $14 an hour — which will leave you with a measly $1 an hour profit.

But if you look for a more modestly-priced vehicle, like a Toyota Camry or Volkswagen Jetta for say around $185 per week, and drove the same 50 hours as above, the car cost would only nick $3.70 off your hourly pay.

The benefit to renting or leasing a car for rideshare driving is that all your costs are included in your weekly or monthly payments. There will be no surprise maintenance or repair costs — as long as you partner with a company that covers those things — and most of them do. So while the weekly or monthly cost will be a little higher than what you would pay if you purchased a vehicle, you won’t have any surprises at the end of the day.

You basically have three options when it comes to getting a vehicle for ride-hail driving. You can purchase a car, or lease or rent.

When all is said and done, it will cost you just about the same whichever way you go. The difference is when you pay and how easily you can get out of the deal of you have a change of heart. If you purchase a vehicle, you’ll pay the biggest part of the cost on the tail end when you sell it. That’s when you’ll feel all the depreciation those miles put on your car. But if you lease or rent, you’ll actually be paying that depreciation cost every week, as you go, which means less money for you now.

Obviously, getting out of a purchase is a lot harder than ending a short-term week-to-week rental. Traditionally, a lease is nearly as hard to get out of as a purchase, but today there are a lot of companies offering short-term leases specifically designed for rideshare drivers. These leases are usually for just a year, compared to two and three years for a standard traditional lease.

Hyrecar is a peer-to-peer car rental service designed specifically for rideshare drivers. Car owners can advertise their vehicles on the service and local Uber and Lyft drivers can book the cars through the website. It’s like Airbnb, but for cars. Hyrecar takes care of all the necessary rideshare insurance, but of course you have to have your own personal auto insurance as well.

The rates generally run from between $150 and $300 a week. Hyrecar is a great way to test the waters for any length of time you like because you can rent for a single day or for a week or month — whatever suits your needs. However, since you are renting from individual car owners, there is sometimes friction between the renter and the owner. For instance, you may find the car you want to drive but the owner is only renting it out for a week when you might want to keep it for a month. These kinds of mismatches in supply and demand can cause significant problems in using this service.

Hyrecar is available pretty much nationwide.

This company partners with Uber and has a whole program devoted specifically to Uber drivers. You must be approved to drive with Uber to rent from Fair and you must be at least 21 years old. Prices start at $130 a week and include unlimited mileage, routine maintenance, roadside assistance, vehicle registration and warranty. This is an open-ended lease option, not technically a rental. However, you can end it at any time with no penalties so functionally it works much like a rental.

While they say you can begin renting for $0 down, there is a $185 refundable security deposit and they will do a soft credit check.

Fair is available in select markets.

For Lyft drivers, there is Lyft’s ExpressDrive and it works much like Uber’s Fair. Both companies offer various carrots and sticks for using their rental program. While the rules and incentives frequently change, they tend to tie drivers into working only for the company they rent the car from. If you rent from Uber’s Fair, you’ll fair better if you stick to driving only for Uber. That’s because the more you drive for them, the more bonuses and incentives you’ll get toward the car rental fees. While both companies allow you to drive for the other with these rentals, they do everything in their power to keep you driving only for them.

With Lyft’s ExpressDrive, everything is paid for: rideshare insurance (in addition to your own personal auto insurance, which is always required), routine maintenance, licensing and registration, etc. They also include roadside assistance should the car break down on the road.  You can return the car anytime after seven days. So, you are required to initially make a seven-day commitment but after that, you’re free to let it go any time.

ExpressDrive has limits on how many personal miles you can drive, although they offer unlimited mileage while signed into the Lyft app. They also have various requirements, such as Miami drivers being required to give 20 Lyft rides every seven days while they’re renting the car.

Uber also partners with Getaround to offer cars by the hour. Starting at just $4 an hour, you can hop in and hop out whenever you have a couple of extra hours to drive. This service is available in select cities, including Atlanta, Boston, Denver, Los Angeles, Philadelphia, San Francisco Bay Area and Washington D.C.

If you drive a lot of hours, a weekly rental is probably better suited to you. Weekly rentals are $239 per week, and if you commit to four weeks at a time, $219 a week.

You can pickup a Getaround vehicle by using the Getaround app. Please note that Getaround also does regular car rentals to non-Uber drivers. If you’re driving for Uber you have to select a car from the “Drive with Uber” section of their app. Those are the only cars in their stock of vehicles that are available for Uber drivers.