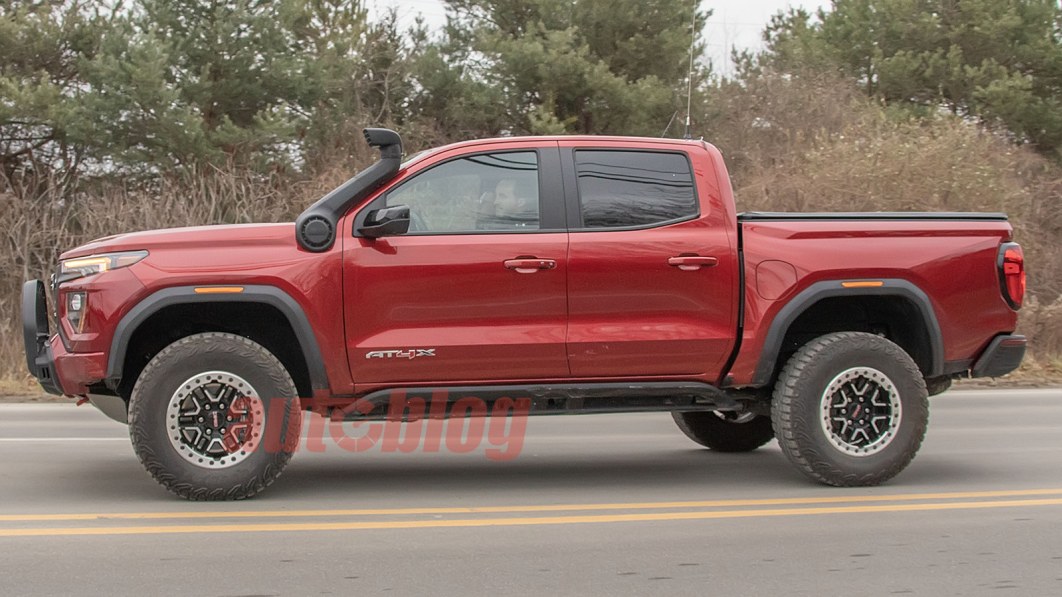 As with the previous generation, it appears the 2023 Chevy Colorado ZR2 will be getting a special AEV version. Not only that, but its twin, the GMC Canyon AT4X will get one, too. And as these spy photos show, they'll have some additional off-road accessories included, as well as bigger tires.

We'll start with the GMC Canyon. The first example of the truck without any camouflage is not quite fully upgraded like the camouflage vehicles. But it has one part not seen on the others: the AEV snorkel.

The two appear to be riding on larger Goodyear Wrangler Terrain MT tires. These look like 35-inch examples -- 2 inches larger than the biggest tires available on the ZR2 and AT4X. They're also mounted on beadlock capable wheels.

Besides the bigger tires, both trucks also feature a new bed-mounted spare tire. It's a full-size spare, and unlike past bed-mounts, this one places the tire flush against the cab. The benefit of moving the spare to the bed is departure angle. And while this position looks a little less like how trophy trucks carry their spares, it should provide better cargo space. Rear visibility probably isn't great, though.

Generalizing based on what we know about the current ZR2 Bison, the new AEV trucks will probably get unique grilles, steel bumpers, fender flares, a suspension lift and possibly even axle ratio changes. Additional options such as a winch could be offered, too. We expect the trucks will be revealed within the next year, since the base trucks have already been shown, and these are just upgraded versions of those trucks.