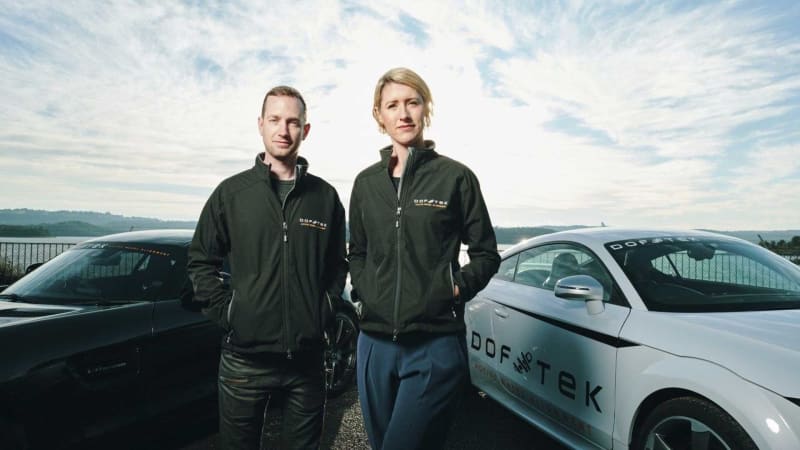 Wheel alignment is an exact science, but a one-size-fits-all exact science. Camber, caster, and toe can't be changed once the technicians have finished their work beyond what the suspension provides. Thanks to a piece in New Atlas via Motor1, we know an Australian company called DOFTEK believes the automotive world can do better. The DOFTEK Active Wheel Alignment System (AWAS) has been in development for two years with the aim of enabling cars to adjust the three alignment orientations on-the-fly. Doing so will create a better contact patch during everyday driving, becoming especially useful for maneuvers like hard cornering.

Founded by husband and wife team Geoff and Priscilla Rogers and their business partner Dr, Paul Dowie, Geoff said automakers have been working on their own systems for about 15 years, but couldn't crack the nut of cost, complexity, and weight. He didn't explain how DOFTEK has done that, but the company's list of benefits for AWAS reads like the list of cures from a 19th-century patent medication that remedies everything from gout to impiety. The AWAS fits on every suspension layout, from MacPherson struts to double wishbones to multi-link, and rear-wheel steered cars. It also fits commercial trucks and trailer wheels. It adds about a kilo per installation, so if placed at all four corners of a car it would add about nine pounds. It can lower rolling resistance to save fuel or extend an EV's range, reduce tire wear in general and especially uneven tire wear, decrease tire temperatures, cut down on tire noise, and improve noise, vibration, and harshness.

The AWAS consists of two electromechanical devices, one placed at the OEM suspension mount for caster and camber changes, one placed on the tie rod for toe changes. A DOFTEK control unit communicates with the car's primary ECU to decide on adjustments. The first version of the system, developed on an Audi TTRS, used a three-mode controller. Normal didn't change camber, Sport changed camber -1.5 degrees, and Sport+ changed camber -3 degrees. Geoff said that prototype delivered a 10% drop in rolling resistance and tire temps, and a 15% increase in handling performance.

The second prototype is being developed on a Mercedes-AMG GT S, and has been upgraded with the ability to adjust camber specific to each wheel — the right wheel can go -2.8 degrees of camber while the left goes -0.2 through a left-hand turn, for instance. The derivative unit can be controlled by the driver, like the first prototype, or left on its own to make dynamic adjustments. Geoff said its benefits are even better, the varied camber settings improving handling by up to 29%. We would expect a little positive camber on that inside wheel, but we aren't clear on the baselines, nor is it clear how DOFTEK is measuring handling performance. (Mercedes has also been running its Dual Axis Steering on-the-fly toe-in system on its Formula One cars this season.)

Geoff said the company is holding talks with OEMs. Once business development begins to approach normalcy, DOFTEK is targeting luxury and performance vehicles for the first applications, then EVs.