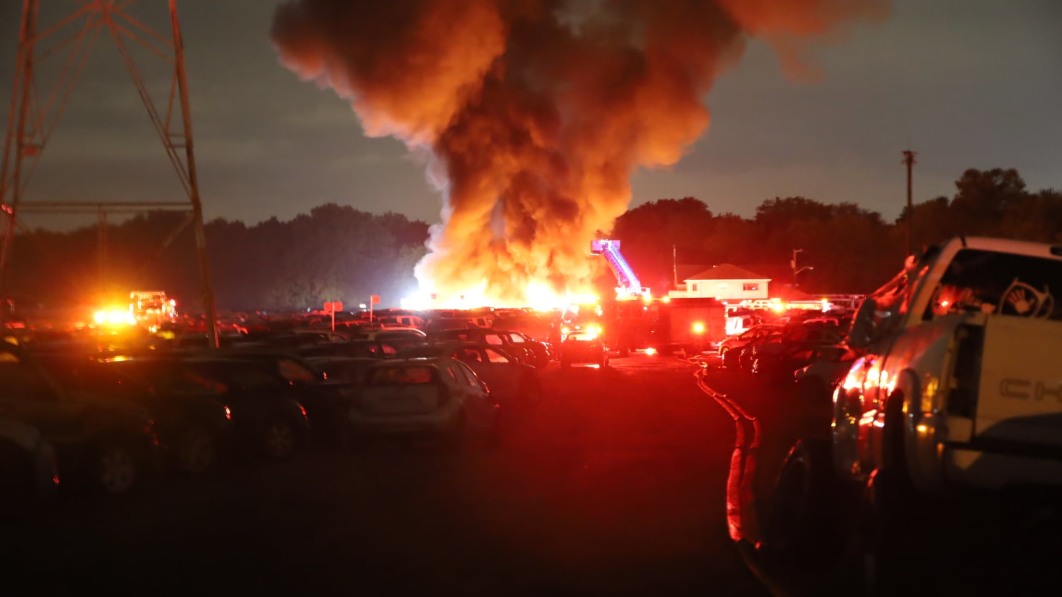 Approximately 40 cars were destroyed when a massive fire broke out in the middle of the night at an auction lot in Indianapolis. Dozens of firefighters managed to put out the flames in under two hours.

The incident happened at a lot owned by Insurance Auto Auctions located on 3202 South Harding Street. While the cause of the blaze remains under investigation, local news channel Fox 59 reported that lightning may be to blame; thunderstorms were reported in the area shortly before the fire started. No injuries or deaths were reported.

Insurance Auto Auctions is a national company with locations all across America that specializes in selling salvaged and lightly-damaged vehicles, so the fire damaged a wide selection of cars. Photos published by the Indianapolis Fire Department show a Chrysler 200, a fourth-generation Chrysler minivan, a last-generation Kia Soul, and a Jeep Renegade, among other models. Flames don't discriminate: there's a Mercedes-Benz E-Class in the lot, too.

Putting out the fire required using tanker trucks to bring water deep inside the lot. Firefighters stood on ladders to extinguish the flames from above, and fork lifts were used to raise the burning cars off the ground and to move nearby cars in a bid to save them. While the situation was apocalyptic, fire fighters arrived at the lot at 1:46 a.m. and had the flames under control at 3:26 a.m. No damage estimate has been released as of this writing.