A Ferris Bueller replica Ferrari is headed to auction this week 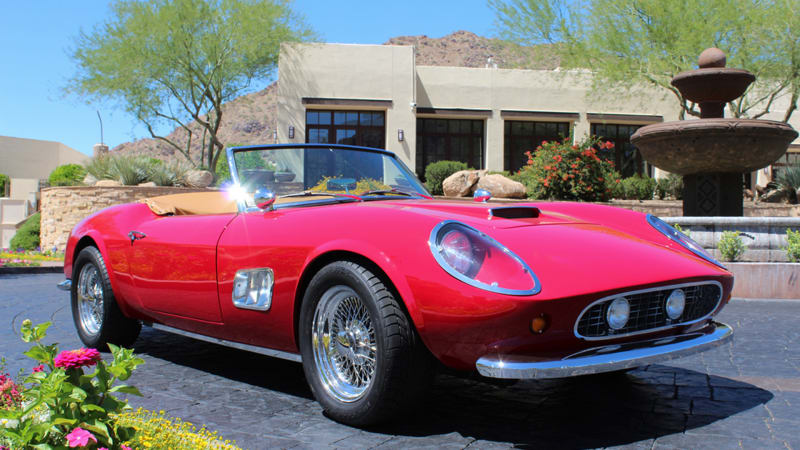 Would you like to own a Ferrari, or a piece of movie history? How about a little of the latter that is pretending to be the former?

In any other year, even noteworthy auction listings popping up this week probably would have drowned in the rising tide of auto show news, but with the Detroit auto show punted to June this year, we've been inundated with some fantastic auction finds, including this Hollywood icon that was built for one of John Hughes' greatest films.

This 1963* Modena Spyder California is maybe one of the best-known Ferrari replicas in the world, and it's slated to cross the block at Barrett-Jackson Scottsdale this weekend.

It takes an eagle-eyed auto enthusiast to recognized the Bueller fakes for what they are, but the fact that they're replicas of the Ferrari 250 GT California doesn't really hurt their value. In fact, it makes it even easier to verify their provenance. Granted, real-deal 250 GTs are going for stupid money, but we find it hard to believe that a little Matthew Broderick stardust would really make much difference when examples are being auctioned off for more than $17 million.

As Road & Track points out, the other running movie replica sold for more than $400,000. Fortunately, there were three of these replica models built for the film, so the buying public is getting yet another crack at one.

Two of the replicas were runners, and the third was effectively an unladen stunt double used for the infamous scene where Alan Ruck's Cameron Frye works out his daddy issues by sending pop's precious collector's item straight through the side of their Highland Park Frank Lloyd Wright.

You know, the sort of thing your average angsty American teenager did before Twitter was invented.

The replica is not just a looker; it's a driver. It sports a 427 cubic-inch V8 rocking a four-barrel carb mated to a five-speed manual transmission and sends power to the rear wheels through a limited-slip differential.

Per the listing, this replica underwent a thorough restoration and even boasts a few upgrades over "stock." It's sitting on custom QA1 adjustable 16-position aluminum coil-over shocks mated to a four-wheel independent suspension and a set of upgraded Wilwood brakes (6-pot front; 4-pot rear) with 12-inch vented, slotted and cross-drilled rotors.

Even the body parts got some attention. The inner tubs were replaced with carbon fiber bits and custom 16-inch chrome wire wheels were added. If the carbon fiber parts alone weren't enough to qualify this replica for resto-mod status, consider that it also has a GPS-fed speedometer and a Retrosound radio with Bluetooth, two Blaupunkt amps and 14 speakers. Look closely and you may still not spot them.

The car also got the usual interior and exterior attention, and the top boot and seats were completely recovered with high-quality tan hides.

There's not much time left before this choice automobile crosses the block. Look for it at B-J Scottsdale on Saturday; it's lot number 1378.