After years of polishing its plug-in hybrid powertrains, Volvo is jumping into the electric vehicle space with both feet. But rather than trying to make an immense splash in the deep end, Volvo elected to start with its entry-level vehicles – the 2023 XC40 Recharge and its mechanical twin, the C40. Fear not. While they may be small, they are charmingly mighty.

Volvo was so eager for us to sample the XC40 Recharge that it actually loaned us a 2022 model for the purpose of this writeup after announcing its planned updates for 2023 XC40 lineup. The changes are of virtually no consequence in the context of this review, as most of them serve to catch the standard XC40 up to the Recharge model, which was already equipped with Volvo’s latest goodies, including Google’s new Android Automotive infotainment suite. There are some aesthetic updates (ooooooh, new fog light trim!) but nothing truly noteworthy.

While the XC40 is meant to appeal to a more crossover-minded buyer, it and the C40 are virtually identical. While Volvo offers pared-down versions of its EV powertrain in other markets, America gets only the “Twin” variants of each, named thusly for their pair of electric motors. Nope, no bargain-priced FWD-only models here. From the $54,645 (destination included) base model on up, you get 402 horsepower, 486 pound-feet of torque and all-wheel drive.

It being a Volvo, everything inside is a little bit different (perhaps just for the sake of being so) but without being Saab levels of weird. Take the time-tested process of turning the car on, for example. There isn’t a key nor start button; Volvo’s electrics are just on by default. If you’re in the car and the key is present, you’re live. Put it in whatever gear you like and set off on your way. When you’re done, put it in park, get out, lock the door and, should you need to or want to, plug it in.

While that may seem superficially unconventional, it’s fundamentally a very Volvo thing to do. There are those who choose to believe that Tesla deserves credit for normalizing minimalism in car interiors. That’s a neat theory, but Volvo’s been doing it better for longer — and not as a disguise for being cheap. Eliminating the on/off switch seems very on-brand for a company whose cabins have long resembled that one section of the Ikea maze where the college kids can’t even afford to window shop. 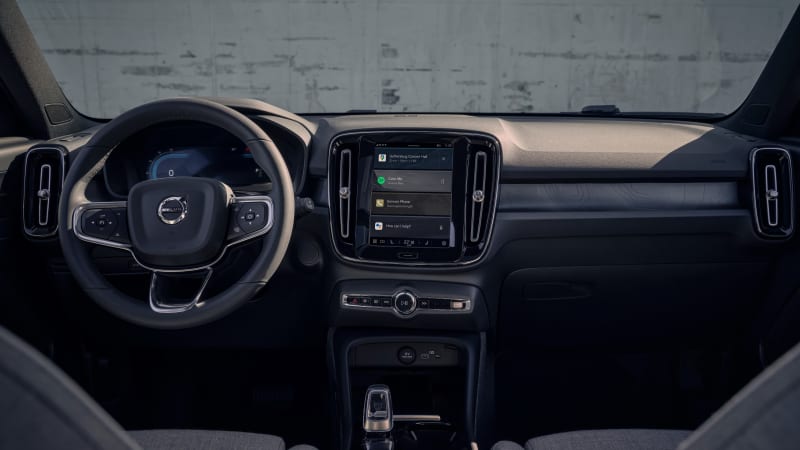 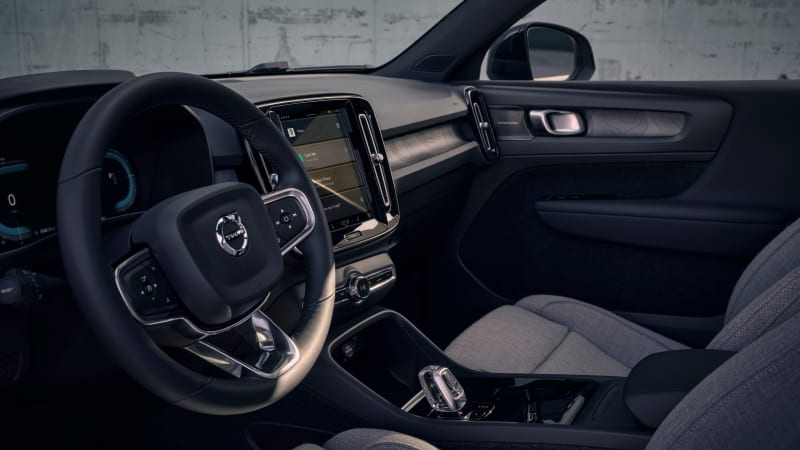 If anything, the XC40 Recharge and the C40 both lean a little too far in that direction. The two are virtually indistinguishable from the inside, which is neither here nor there, but frankly it would be nice to see a bit more of the subtle flex Volvo has traditionally displayed in its cabin materials and design. The electrics come off a bit underspecified and barren by comparison. The standard XC40 gets a pass at $38,000; north of $50,000, not so much.

Underway, the XC40 prompts flashbacks to Autoblog’s now-departed long-term S60. Newer examples of the T8-powered model are now marketed under Volvo’s electric “Recharge” sub-brand (a nod to the fact that virtually anything with a plug qualifies as an electric car for the purposes of most world government regulations) and for better or for worse, the association is more than nominal. Both offer crisp, urgent acceleration; comfortable, well-isolated cabins; and competent but not particularly aggressive handling — more on that later. The big difference is that there’s no coarse, twice-force-inducted four-cylinder under the XC40’s hood threatening the serenity of your cruise; just two mighty powerful electric motors.

That’s an excellent balance for a luxury vehicle, which is precisely where Volvo leans. Polestar exists for a reason, right? But as rapid as even mid-tier electric motor acceleration can be, there’s a concern that they’re capable of outrunning their own chassis, so to speak. Like the S60, the XC40 Recharge carries its heft gracefully, but that can catch you out if you get a little too daring. In both cases, their straight-line speed suggests a performance pedigree that their brakes aren’t really prepared to handle.

What qualifies as “mid-tier” in the world of electrified power? Try a 0-60 time of 4.7 seconds. Yeah, this ain’t your grandpa’s Volvo. This is an empty nester’s grocery hauler with the accelerative capabilities of a midrange pony car and a 70-0 stopping distance that could be put to shame three-row, body-on-frame SUV. Let’s be clear; that’s an EV problem, not a Volvo problem, but it’s illustrative of the broader challenges involved in meeting the expectations of EV buyers (and maybe a few spoiled journalists) who still have Plaid expectations to go with their otherwise argyle sensibilities.

Put another way, Volvo is dealing with the classic tuner’s dilemma on a mass production scale. Like your goofy neighbor’s V8-swapped 850, the XC40 Recharge has way more power than it needs to perform its intended mission. If you look strictly at its straight-line performance, you’d assume the Volvo could hang with a BMW X3 M, and it’s easy to be lulled into driving it like one. 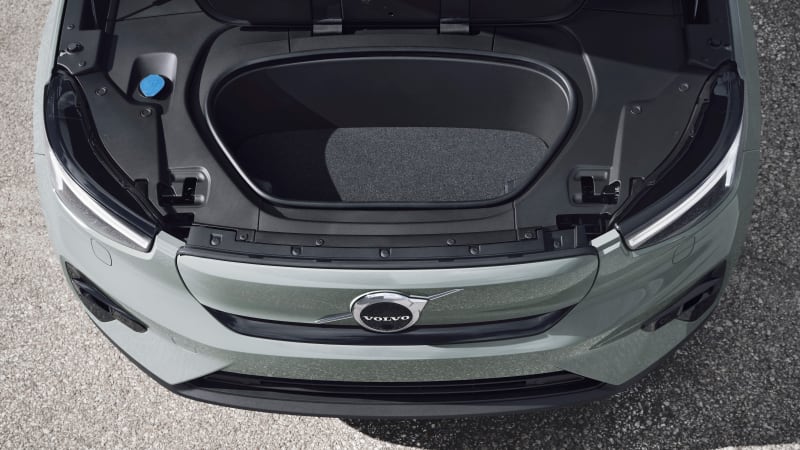 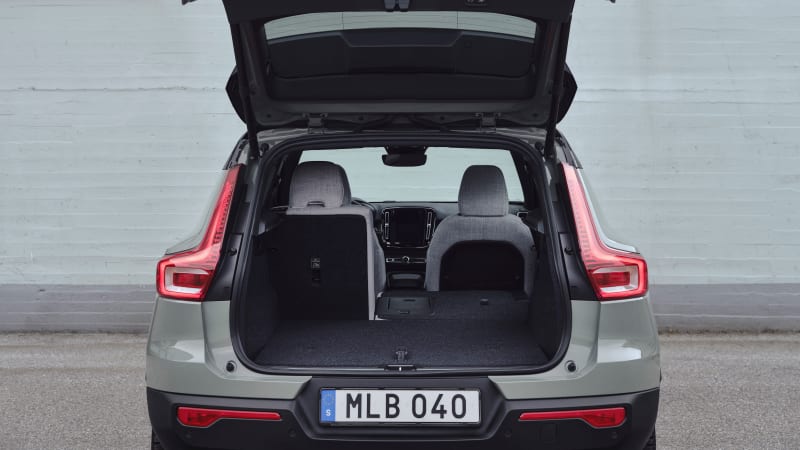 For example, what happens when you come upon some corners. The XC40’s version of “competent” handling needs to be contextualized a bit. The “XC” in its name is Volvo shorthand for “cross country,” so no matter how conspicuously hatchback-like it may appear, this is being marketed as a CUV. Though only a hair higher off the ground than the C40 “coupe”, the XC40 feels more upright and carries more weight up top in its more-pronounced roof. It leans with even a hint of steering input and if you take it too hot into a corner, its nearly-5,000-pound curb weight becomes rapidly apparent. It’s an easy mistake to make and you’ll probably only make it once — hopefully without any meaningful consequences.

After some time in the XC40, the fear that electrified cars will normalize cheap-looking interiors fades. The interior is one of the XC40’s best attributes, even if a tad too minimal. The concern that persists is how quickly they will normalize fast acceleration. Electric cars represent a paradigm shift in how we contextualize automotive performance. Two decades ago, performance like this in a luxury SUV would have been reserved for the elite. Now, it’s yours for only a few grand more than the average transaction price of a new car.

As hefty as these electric Volvos may be, the real elephant in the room is (and shall remain, at least for the short-term) Tesla. The Model Y Performance offers measurably more power and the Long Range absolutely spanks the Volvo in one-charge driving distance (318 miles to 223); even the sporty Polestar 2 with its dual-motor powertrain offers 246. Neither the Volvos nor Polestar boasts a Supercharger network, either. But Tesla’s recent spate of price hikes have lifted the Model Y out of bargain territory. Sure, you’ll get more, but you’ll be paying a $20,000 premium (at least) for the pleasure.

At the other end of the spectrum, Hyundai and Kia offer Ioniq 5 and EV6 variants that creep into the XC40’s price bracket. Though offering superior range and similar 0-60 times, the Volvo’s 82-horsepower and 40-foot-pound advantage make it that much punchier when passing at speed, where power matters more than just about anything else. Until the Mercedes EQB arrives (we'll be getting our first drive in the coming days), the XC40 won't have a direct rival, meaning comparisons for now will be the imperfect sort seen above.

This may not be grandpa’s idea of a Volvo, but it sure is mine. It’s power without pretension and luxury without largesse. Like the S60 we enjoyed so much, the XC40 bears the flaws one would expect from an early effort, but the shopper who can live with its disappointing range figures will find the XC40 Recharge’s brisk acceleration and classic Volvo sensibilities equally endearing. Shame it’s so heavy.