It's raining tigers and werewolves through the entire session. Britain's Silverstone Circuit is not for the faint of heart in dry weather, but with standing water between Woodcote and Copse, the curbs as slippery as liquid soap and fast corners like Stowe crisscrossed by rivulets gleaming in the morning haze, the adrenaline pump is already working overtime. Even though Porsche replaced the 2023

911 GT3 RS's Michelin Pilot Sport Cup 2 tires with more versatile rubber, in these appalling conditions even dedicated rain tires would struggle. Good thing for lots of downforce and an adjustable suspension that truly blurs the line between street car and race machine.

In Track mode, dialed in by Porsche's familiar drive mode controller, this very special 911 is the first of its kind to invite you to tweak compression and rebound of the front and rear dampers via the PASM thumbwheel. The driver can also adjust the rear differential locking ratio. The DRS (drag reduction system) that we know from Formula 1 is controlled via a button in the left steering-wheel spoke. The 20 percent adjustment range is split into nine steps from +4 to -4 with zero as the balanced baseline. Sound complicated? You bet. The GT3 RS's marvelous adjustability is but one reason its drivers won't ever be bored.

In these treacherous conditions, the day could have gone terribly wrong. Instead it miraculously produced one magic moment after the other. While the GT3 RS's naturally aspirated 4.0-liter six gained a relatively modest 16 horsepower over the GT3, the aero wizards elevated the GT3 RS to an altogether different downforce league. In low-drag mode, the underfloor elements and the double-decker rear wing assume a virtually horizontal slipstream position. As soon as the DRS closes again, though, the maximum downforce increases within 0.35 second from 661 pounds to a massive 1896 pounds—the equivalent “of two racehorses on the roof," chortles Porsche's Mr. GT, Andy Preuninger. Two-thirds of that negative lift press on the front end with a vengeance, which makes high-speed turn-in maneuvers in the rain eerily surreal. Since the Michelins pick up temperature with every extra fraction of g-force they experience, the grip only increases despite the sloppy conditions.

"The previous GT3 RS was equipped with three nose-mounted radiators," says Preuninger. "This time, we opted for a single, more compact radiator positioned at a quite radical angle, which frees enough space for two large lateral ducts governed by active aero elements in sync with the two-stage transverse downforce controller ahead of the front axle." Out back, the split-level rear wing boasts a stepless 34-degree adjustment span. And what about the trunk, you ask? It is no more, but you can always delete the no-cost roll cage and put stuff where the rear seats used to squat. Speaking of seats, a special honorable mention goes to the 918-style buckets, which are supportive and comfortable as well as generously adjustable. Although Porsche will paint the GT3 RS in any color you fancy (for a price), the aero elements are mandatory matte black. Extra money buys the hideously expensive Weissach pack, which saves—in combination with the optional forged-magnesium wheels—almost 62 pounds in weight. Porsche says the base model tips the scales at 3197 pounds, a mere 33 pounds up from the GT3. 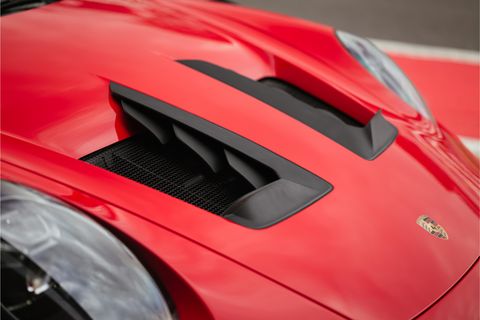 It's still pouring down during our second and third stints on the track, but the GT3 RS doesn't seem to care, especially from Maggots through Chapel, where the RS holds the line as if guided by a high-voltage induction loop. Awesome stuff. Through slower corners, it helps to cut a slightly wider arc to approach the apex in a straighter line and then drop the hammer early. The flat-out sections are the only places where the GT3 RS will struggle to keep up with the regular GT3—the substantial drag coefficient of 0.39 is the price you pay for the riveting downforce. The GT3's claimed top speed, 199 mph, bests the GT3 RS's 184-mph Vmax. But the wide-body weapon wins the sprint to 60 mph with a claimed time of 3.0 seconds, which is 0.2 second faster than Porsche's stat for the GT3. (We clocked the latest PDK GT3 at 2.7 seconds to 60 mph, so consider Porsche's numbers conservative.) Porsche also claims that zero-to-100 mph is a 6.9-second time warp, and 125 mph arrives after only 10.6 seconds. As opposed to the GT3, which can be had with a six-speed manual, the RS is only available with the close-ratio seven-speed PDK dual-clutch box. Despite the overdrive top gear, efficiency is an alien term to this naturally aspirated animal. The standard 911 GT3 is EPA rated at 16 mpg combined, and we’d expect this mega-winged variant to fare even worse.

While the GT3 RS gives you plenty to think about out on the track, choosing gears isn't necessarily among your decisions—Track mode knows exactly when and where to act, and it does so in sync with the conditions (in this case, still wet). Upshifts are wham-bang brusque, but downshifts under braking and when winding on lock feel buttery patient. Redlined at a yelling 9000 rpm, the big six needs to be revved hard to deliver. Maximum torque—an unexceptional 343 pound-feet—requires a busy 6300 rpm, and peak power is 518 hp at 8500 rpm. Once again, these numbers don't tell the full story. While torque was beefed up in the critical 4000-to-6500-rpm bracket, hotter camshafts and optimized cylinder heads produce notably more punch above 6000 rpm. Nuances only, but subjectively at least, the latest (and most likely last) free-breathing high-performance boxer engine feels a quantum more urgent, seamless, and, ultimately, explosive. It also makes all the right noises, from the high-pitched yet unexpectedly disciplined idle to the phonetic peak, when sound and noise fuse to a brutally intense Björk-sings-Wagner aria. 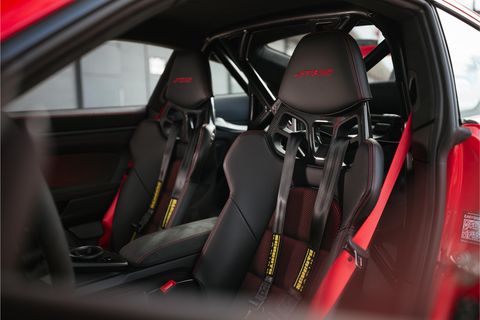 The 992-generation GT3 RS is not as concerned with absolute speed as it is with concise g-force management, finely dosed aero balance, and communicative cornering grip. For instance, if you corner at more than 0.90 g and go wide-open throttle at 5500 rpm or more, DRS will automatically switch to ground-effect mode and eventually pop the air brake, which darkens the rearview mirror when the captain drops all four anchors. It's almost hard to believe that this car is a close relation to the more mellow 911 strains—this isn't merely a GT3 on steroids. Instead, the latest GT3 RS is a road-legal and, we suspect, road-compatible race car in disguise, strong on ability yet stronger still on emotion and excitement. At $225,250, it is some $54,000 more expensive than the non-RS version, which is somewhat irrelevant because Porsche has for the time being closed all GT order books. While the special-edition 911 ST (a manual-transmission RS without the wing, limited to 1963 examples) was allegedly sold out even before Weissach admitted its existence, the decision to move Cayman/Boxster production from Zuffenhausen to Karmann could make room for an extra 1500 GT3 RS units next summer. Which is great news for the lucky few who can afford one, but they could build double that and it still wouldn't be enough.