Modern pickup trucks have been blown out of proportion, literally. Full-size examples such as the

current Ford F-150 can tow and haul like heavy-duty trucks of yore, while the Super Duty can tow up to 40,000 pounds—half the fully laden weight of an 18-wheeler.

Meanwhile, mid-size trucks have followed suit, expanding in size and price to fill the void, leaving room for a truck that's a lot more affordable and a lot less cumbersome. The Ford Maverick is the mini-truck America needs to unclog thoroughfares and parking lots packed with oversize four-by-fours. Not only is the Maverick a terrific tool in its fundamental form, but it becomes ruggedly cool when outfitted with the new-for-2023 Tremor off-road package. 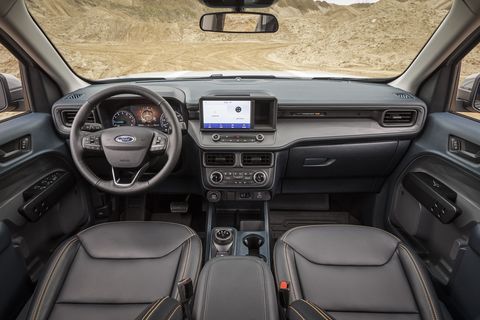 Ford already sells Tremor versions of the mid-size Ranger, the F-150, and its Super Duty trucks. Now, one model year after the company resurrected the Maverick moniker in the form of a compact unibody pickup, the off-road-oriented treatment is trickling down. The $2995 Tremor package is reserved for the Maverick XLT and Lariat models with the turbocharged 2.0-liter engine. Trucks with the kit are identified by their bedside graphics, smoked headlights and taillights, and orange body accents. Along with an orange stripe in the grille and orange front tow hooks, each of the dark-painted 17-inch wheels has an orange pocket. There's also a Tremor-specific appearance package that adds some black exterior graphics and a gray-painted roof, but we don't think it's worth the $1495 upcharge.

More on the Maverick pickup

Thankfully, Ford takes the Maverick Tremor further than those superficial bits, starting with the front bumper. Unlike lesser models, its redesigned chin incorporates a steel skid plate and allows for an approach angle of 30.7 degrees, just over nine degrees steeper than other all-wheel-drive variants. The Tremor's 1.0-inch lift raises ground clearance to 9.4 inches, which is 0.8 inch more than the truck without the off-road package and a half-inch higher than the mechanically similar Ford Bronco Sport Badlands.

As with its Badlands sibling, the Tremor is the only member of the Maverick family to feature an all-wheel-drive system with a torque-vectoring rear differential. With its aggressively treaded Falken WildPeak all-terrain tires that stand 30 inches tall, the Tremor is well equipped to crawl up, over, or through rocky, sticky, or slippery surfaces. Helping it conquer diverse terrain are selectable drive modes, including Mud & Ruts, Rock Crawl, and Sand. A Trail Control feature that automatically adjusts the accelerator and brakes to maintain a set speed—think of it like off-road cruise control.

Don't confuse the Maverick for a dedicated off-roader like the Jeep Gladiator or even consider it on par with the Ranger, its body-on-frame kin. Ford's tiniest truck has its limitations and won't make it far on truly difficult trail systems. However, it has the hardware to take on obstacles most owners would likely shy away from.

While we didn't have the chance to push the entry-level Tremor to its limits, we did take it off the beaten path and came out the other end pretty dirty. It flexed its suspension, which features unique dampers as well as retuned front and rears springs. We felt the all-wheel-drive setup effectively transfer power to the wheels with traction, which was even more obvious when one of the rears is hung helplessly in the air.

We enjoyed mundanely driving the Maverick Tremor as much as we liked tossing it around on the trails. That duality makes it a compelling package. Granted, its force-fed four-pot buzzes rather loudly at idle, and heavy doses of throttle cause coarse engine sounds to penetrate the cabin. But with 250 horsepower and 277 pound-feet of torque, the 2.0-liter packs a satisfying punch. Keeping the engine on boil is a dutiful eight-speed automatic transmission that oddly can't be manually operated. We haven't yet tested the Tremor-equipped Maverick, but a 2022 XLT model with the turbo four and the FX4 off-road package (featuring the same Falken WildPeaks) sprinted to 60 mph in a tidy 5.9 seconds.

Despite its noisiness, the Maverick is comfortable cruising at highway speeds. It doesn't bounce or fidget, thanks mostly to its direct steering and impressive stability. While it rides on the same C2 platform as the Bronco Sport, the Maverick is 28 inches longer overall and has an extra 16 inches between its axles; it's also a couple of inches lower than the baby Bronco. This little truck feels more refined than its SUV counterpart, and it drives more like a car. Again, its accessibility and nimbleness are among the biggest reasons it's preferable to big trucks, particularly in urban areas.

The few downsides to the Tremor package include its towing and hauling compromises. Its 1200-pound payload rating is 300 less than other Mavericks, even the front-wheel-drive hybrid. Most all-wheel-drive models can pull up to 4000 pounds with the 4K Tow package, but Ford doesn't make that available on the Tremor, so it's limited to 2000 pounds.

Although we wish the Tremor could tow more, we're still smitten with the Maverick because it's incredibly useful in other ways. Its 4.5-foot cargo bed boasts 33 cubic feet of volume, enough to haul nine compostable bags of yard waste, and it's a lot easier to climb into and out of than full-size trucks. The Maverick also has more passenger space than expected, with a rear seat that's comfortable for most adults, although we wish it had HVAC vents in back. Still, Ford manages to make its budget-friendly interior appear more expensive than it is with plastic surfaces that have attractive textures, and cleverly designed storage bins are everywhere. 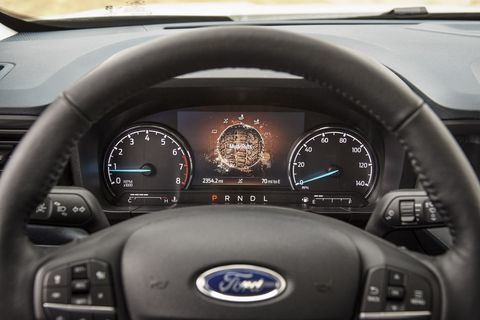 Of course, the Ford Maverick isn't the only new small pickup on the market. The Hyundai Santa Cruz is its closest competitor, with the mid-size-range Honda Ridgeline lurking on the periphery due to its similar unibody construction. All three have strong points, but the Maverick's mix of capability, practicality, and value put it at the top. Plus, it's the only one that offers a legitimate off-road package.

Whereas the least expensive Santa Cruz with the turbo engine and all-wheel drive has an MSRP over $38K and no Ridgeline costs less than $40,000, the Maverick Tremor is a certified steal starting at $31,165. Our $39,075 Lariat example showed the upper reaches of its price range, thanks to the $2610 Luxury package and several other extras. With or without those options, the 2023 Ford Maverick Tremor improves on the mini-truck's fantastic fundamentals by providing more fun for adventurous types.