2023 Ford Explorer Review: From Timberline to King Ranch, a trim for every occasion

Cons: Pricier than most; Hybrid is only marginally efficient; cheap-feeling interior

Picking a version of the 2023 Ford Explorer is like going to your favorite buffet in town. There are tons of choices, and most of them are pretty good. Some of the weirder and out-there trims are also some of the best. If you want power and better handling, there’s the ST model. Only in it for the sportier looks? Waddle on over to the ST-Line. Perhaps you’re interested in something that’s more suited for light off-roading? In that case, the Timberline is calling your name. And just like virtually every other competitor in this space, there are ultra-luxe trims on offer: the King Ranch or Platinum.

The cacophony of trim options is supplemented with multiple powertrain choices, too. You can get the powerful 3.0-liter twin-turbo V6 for maximum towing and acceleration, or you could opt for the Hybrid to save on fuel costs. Thankfully, the base four-cylinder-turbo is an enjoyable engine, as well — it’s tough to go wrong here. Its rear-drive-based platform could be a big plus for those prioritizing dynamics and capability, but don’t expect the Explorer to be a handling champ, because it isn’t. It can just be a bit sharper than most. On the downside, the Explorer is one of the most expensive options in this class of vehicles. Despite that, interior quality is below-average for the segment and is well-below the best-in-class options of the Hyundai Palisade or Kia Telluride. Also, if you really want maximum efficiency, the Toyota Highlander Hybrid will sip far less fuel than the Explorer Hybrid. Despite the negatives, there’s a decent chance that Ford makes an Explorer to fit your niche.

The 2023 Ford Explorer is completely carryover from 2022. Ford made a number of changes and additions to the lineup last year, which you can read about here. 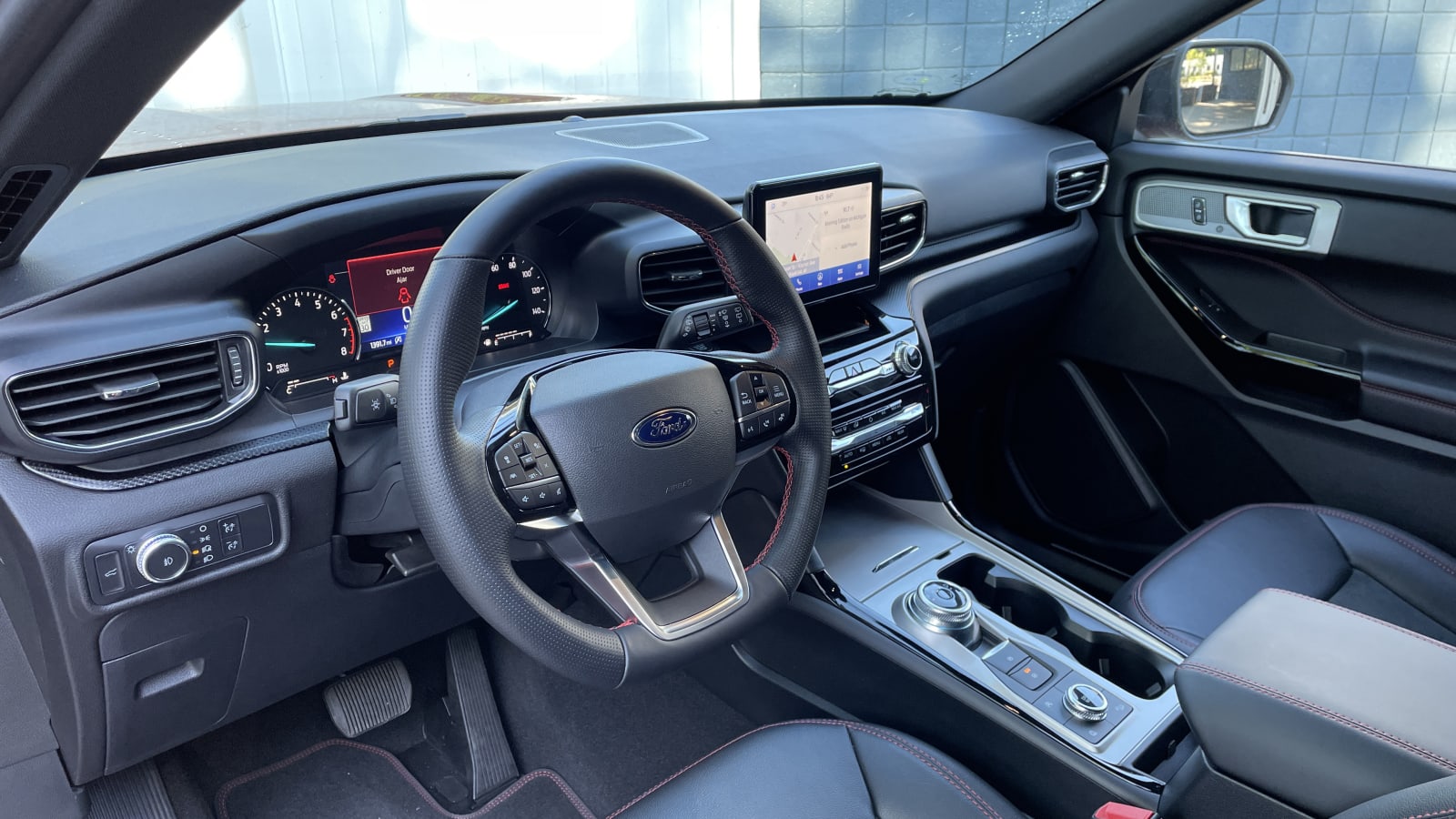 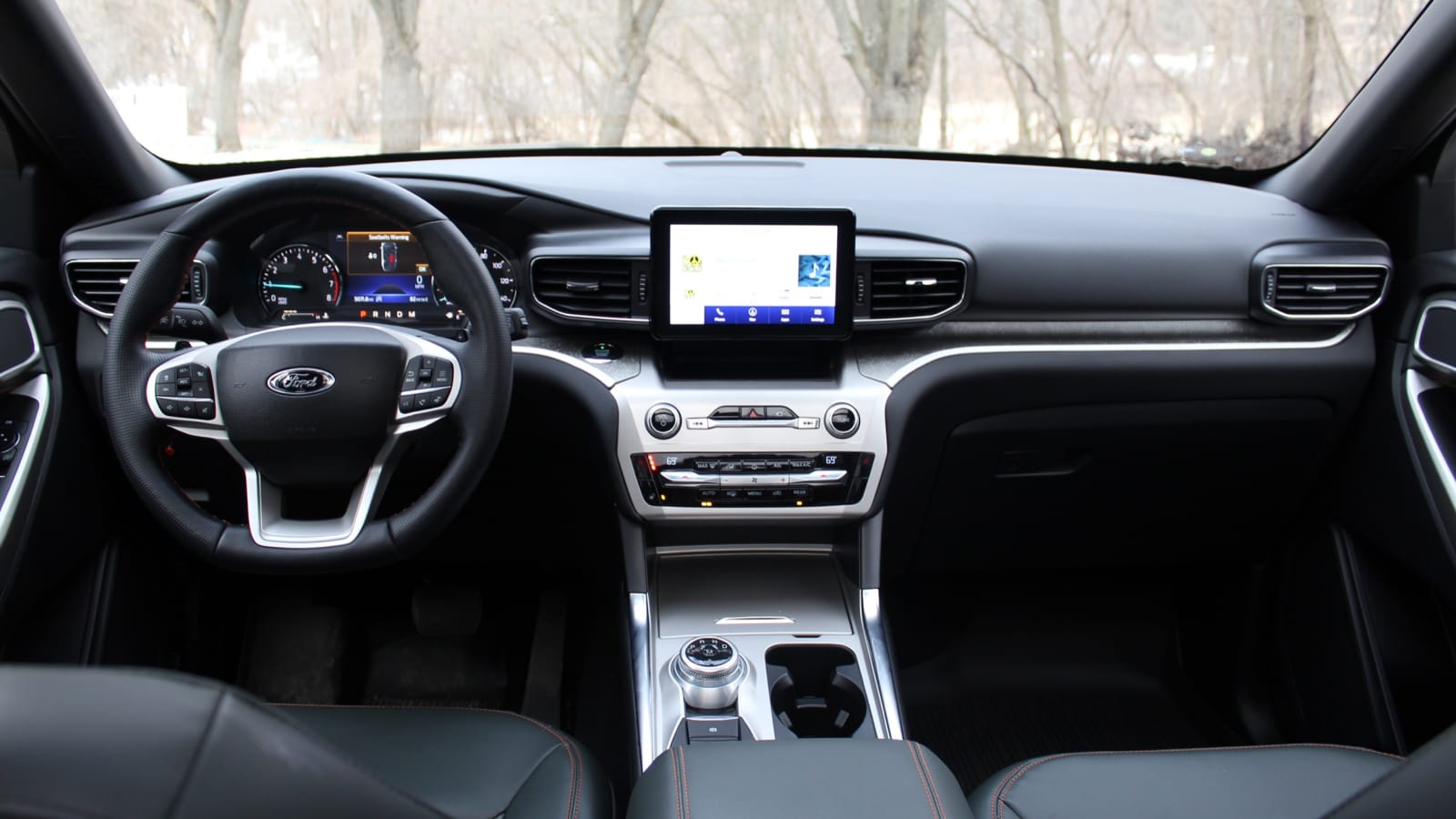 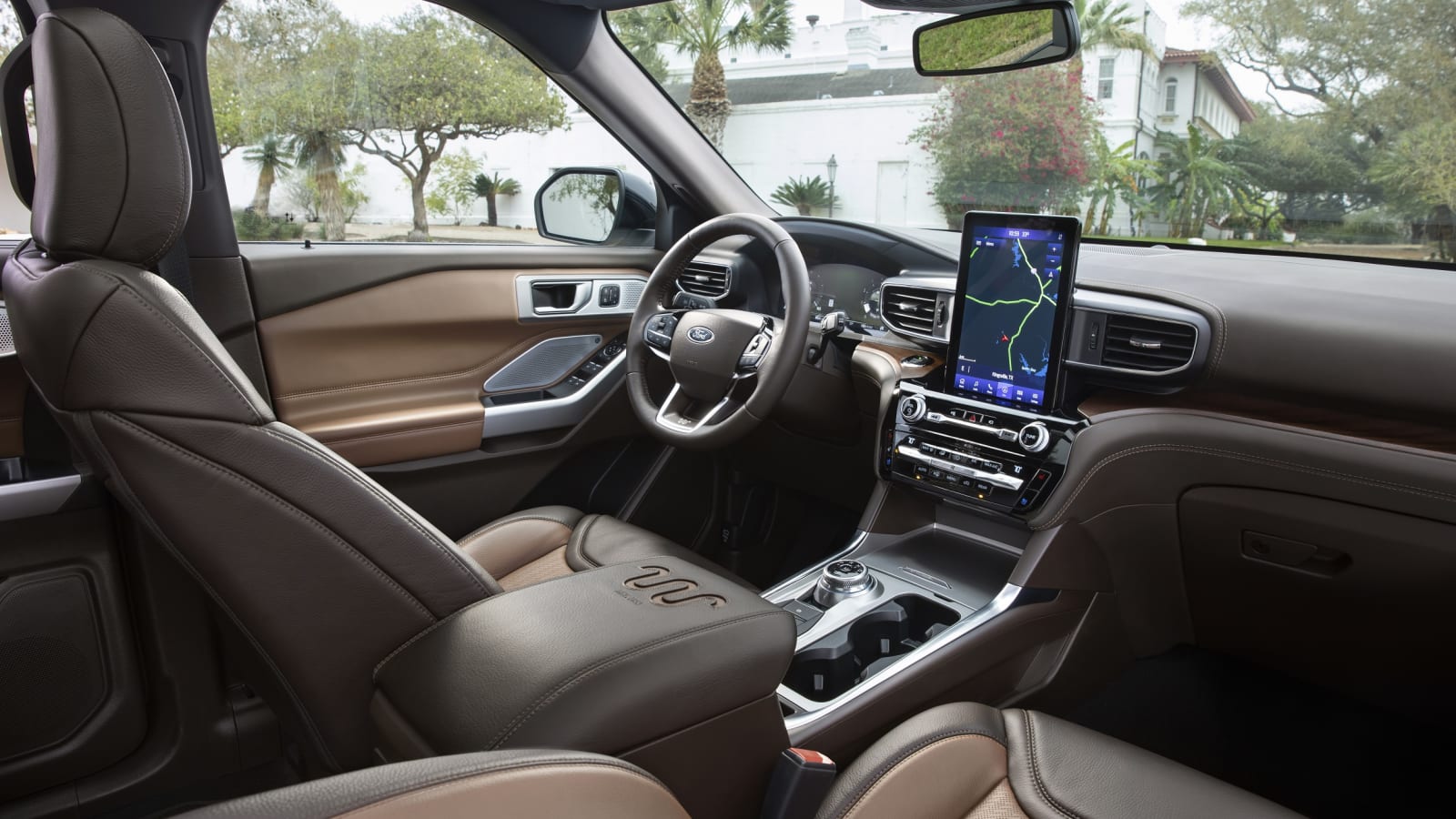 What are the Explorer’s interior and in-car technology like?

We're happy Ford introduced the Timberline and King Ranch versions last year (pictured above) because both add a much-needed pop of color and visual interest to what is otherwise a pretty drab interior. Some may even call it a bit ugly, especially when the big vertically oriented touchscreen is slapped to the dash. It looks awfully low rent compared to a Kia Telluride, Hyundai Palisade or Toyota Highlander, and the materials quality does little to change that perception.

Every Explorer comes standard with Ford's Sync3 infotainment interface. It responds well to inputs and swipe gestures, icons are easily read and pressed, and feature content is typically robust for this segment. That includes Android Auto and Apple CarPlay, but using Sync3's native controls for navigation or playing music from a smartphone is still plenty acceptable.

Now, while every Explorer has Sync3, the screen that controls it differs. The standard 8-inch touchscreen is easy to see and reach, and we like the extra smartphone-holding bin below it. That disappears with the 10.1-inch vertically oriented touchscreen, which is optional on the ST and standard on the Platinum and King Ranch. Worse, the big screen doesn't really improve functionality as you might expect. The 12.3-inch digital instrument panel included on those three top trims is far more successful and even changes its design based on the one of seven possible drive modes selected. 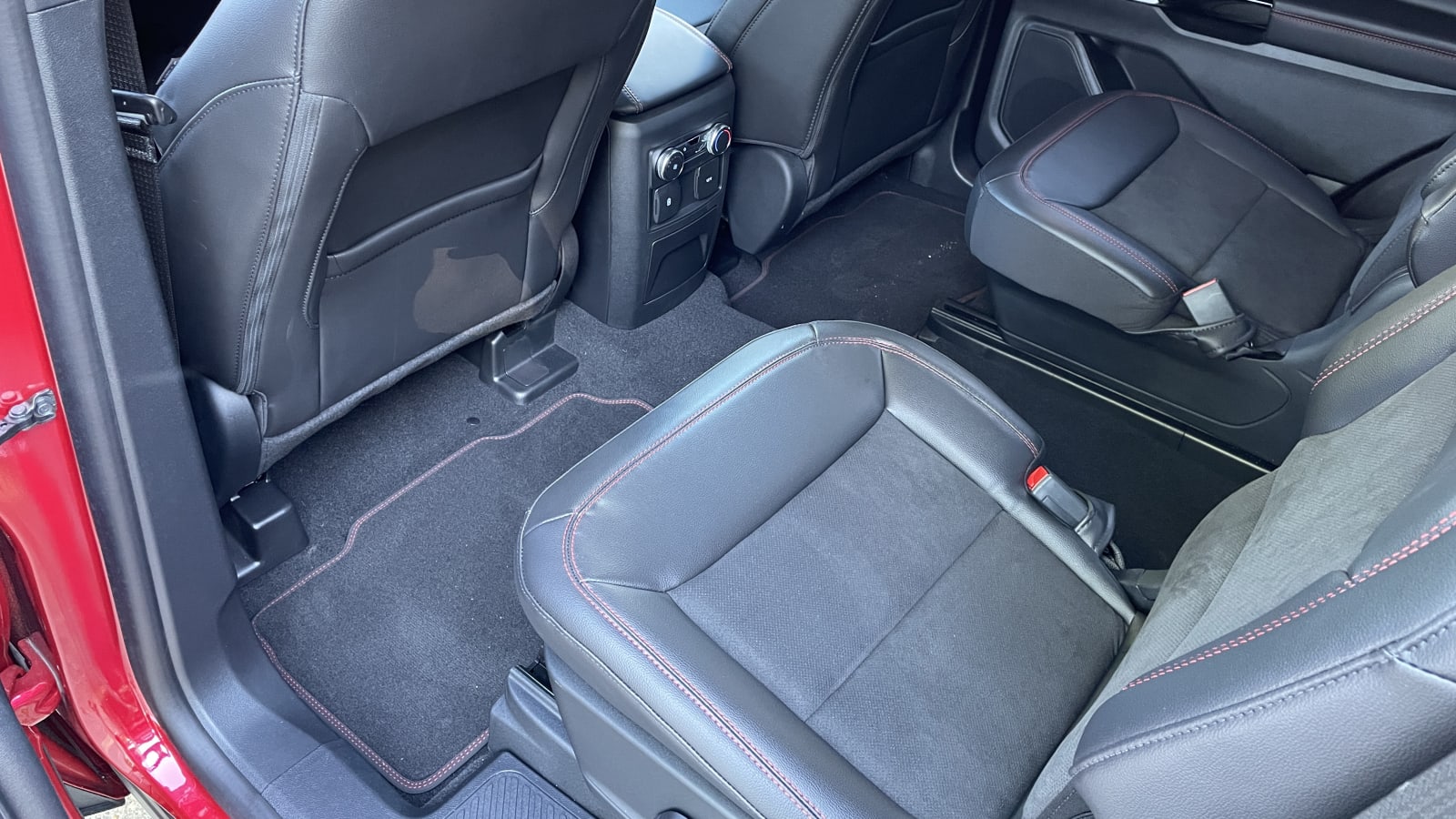 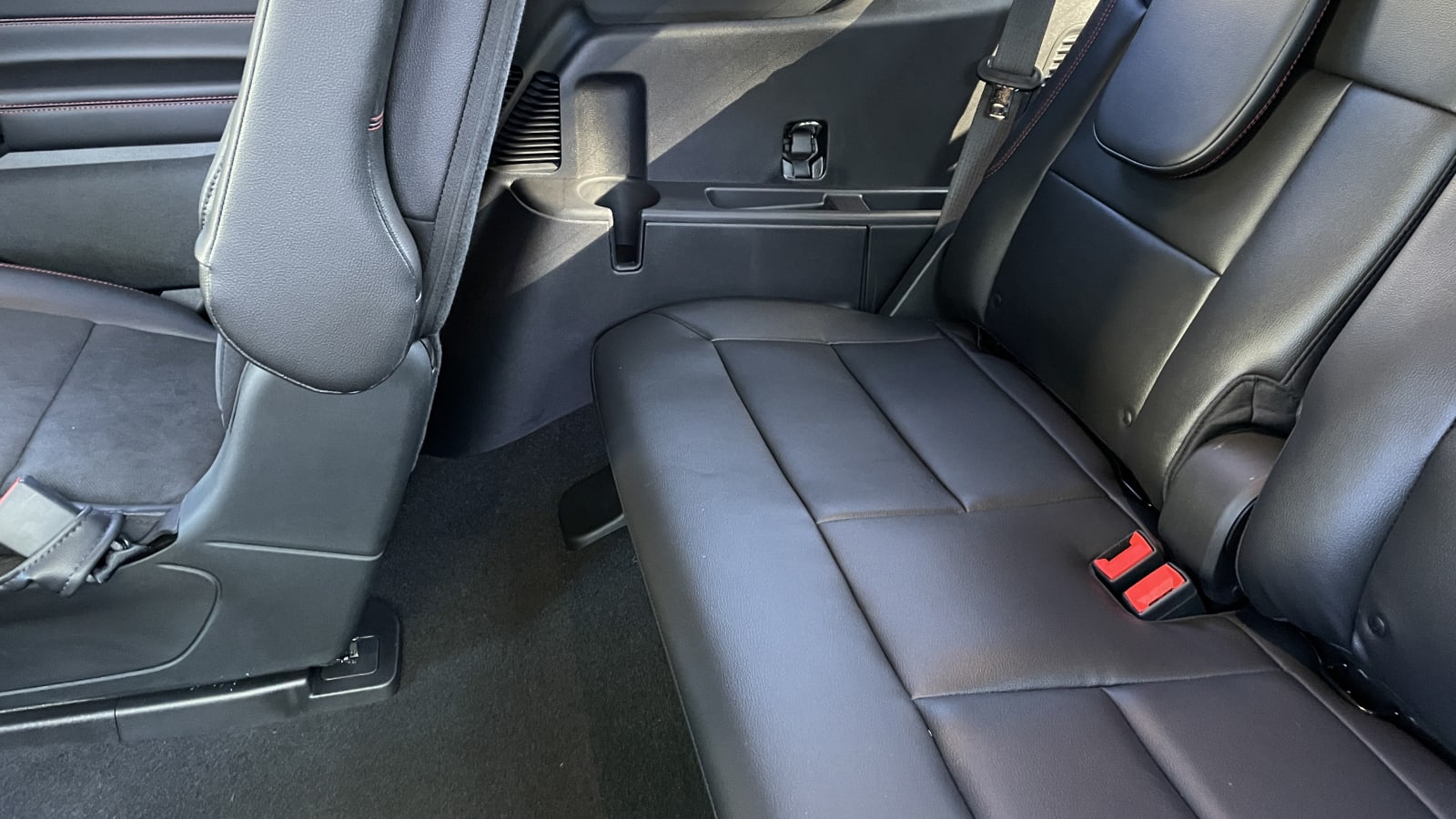 How big is the Explorer?

The current Explorer is larger than both its predecessor and most competitors. At 198.8 inches long, only the gargantuan Chevy Traverse and Jeep Grand Cherokee L are larger. Thankfully, it doesn't feel that big when behind the wheel.

Inside, the Explorer's dimensions indicate it’s above average, but not the best in second- and third-row legroom. In person, we've found it to be less spacious than its dimensions would indicate, especially in the third row. While there's tons of headroom back there, it's largely the result of a low-mounted seat. So, while there's literally more space between rows, your passengers (even kids) are less likely to be comfortable since their butts will be too close to the ground and their legs less supported. They'll be happier in a Traverse, Grand Cherokee L, Kia Telluride or Hyundai Palisade.

The cargo area is as good as its dimensions would indicate, however. Thanks to a removable floor panel, there is more space behind the raised third row than most competitors. The differences in maximum cargo space (all rows lowered) between competitors are negligible, but those extra cubes behind the way-back could mean the difference between bringing all your luggage, buying a roof box or making someone sit with a duffle bag on their lap for three hours. 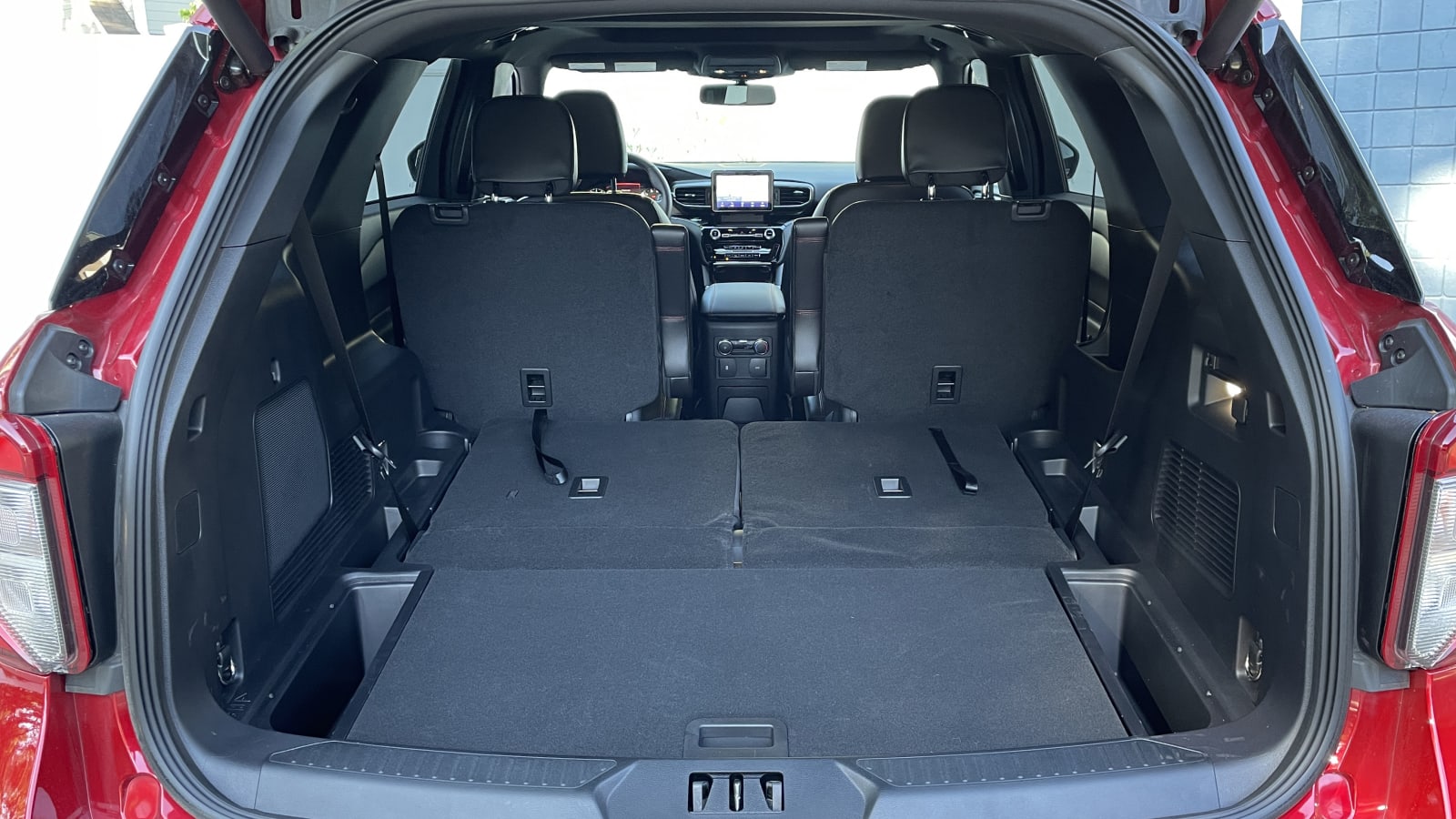 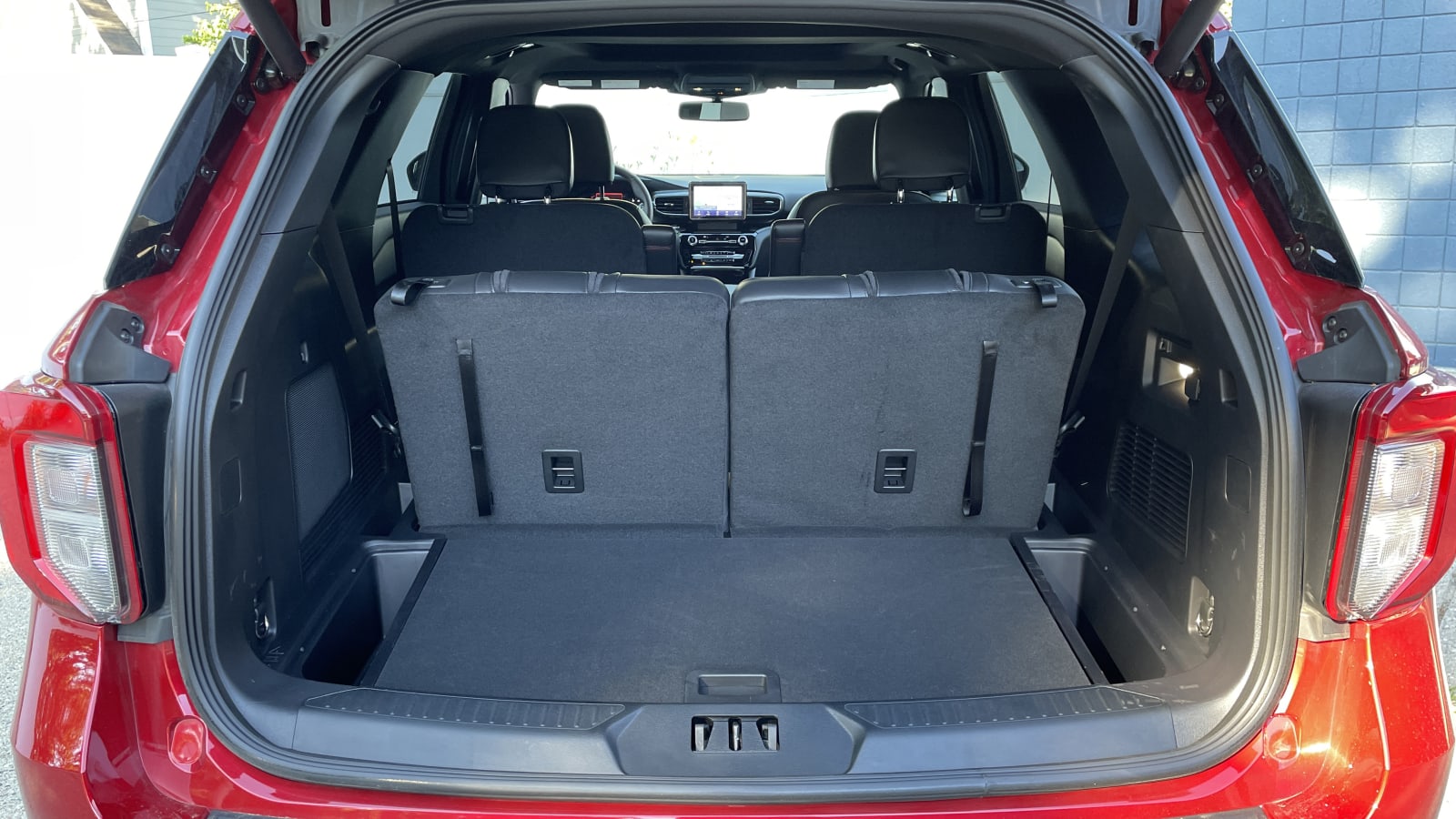 What are the Explorer’s fuel economy and performance specs?

Here is where the 2023 Ford Explorer really shines. Standard on most trims is a 2.3-liter turbocharged inline-four that produces 300 horsepower and 310 pound-feet of torque. That's considerably better than the naturally aspirated V6 engines found in most competitors. A 10-speed automatic and rear-wheel drive are standard, but all-wheel-drive is optional. Fuel economy estimates for 2023 hadn't been released at the time of this writing, but we don't anticipate they'd be different from the final figures of 2022: 21 mpg city, 28 mpg highway and 24 mpg combined with RWD and 20/27/23 with AWD. The AWD-only Timberline is 19/22/21.

Standard on the King Ranch and Platinum is a 3.0-liter turbocharged "EcoBoost" V6 good for 365 hp and 380 lb-ft of torque – that blows away anything offered by a competitor apart from the V8-powered Dodge Durango and Grand Cherokee L. Those SUVs don’t come close to the EcoBoost's fuel economy, however, which is 18/26/21 with RWD and 18/24/20 with AWD. It too has a 10-speed automatic.

The Explorer ST gets an enhanced version of the same engine good for 400 hp and 415 lb-ft of torque. Ford says it'll go from zero to 60 mph in 5.5 seconds, which is certainly quick, but not as quick as we'd expect given its power and the performance of certain competitors. Fuel economy is apparently the same as the Platinum, but we strongly suspect it would be much lower in the real world than in the EPA's laboratory given the power discrepancy.

Finally, the Explorer Hybrid pairs a 3.3-liter naturally aspirated V6 to an electric motor and a lithium-ion battery pack under the passenger-side cabin. Its total output is 318 hp. EPA-estimated fuel economy stands at 27 mpg city, 28 mph highway and 27 mpg combined with rear-wheel drive. It lowers to 23/26/25 with all-wheel drive. This is admittedly underwhelming as according to those same EPA estimates, you'd only save about $100 on average per year by going with the hybrid instead of the standard engine. Also, for comparison, the all-wheel-drive Toyota Highlander Hybrid gets 35 mpg combined. That's as big a difference as it seems.

That said, Ford has put a priority on performance, even with the hybrid. You can see that with towing capacity, which stands at 5,000 pounds for the Hybrid. The Highlander has 72 fewer horses and can only tow 3,500 pounds. For the non-hybrid Explorers, towing goes up to 5,300 for the 2.3-liter and 5,600 for the 3.0-liter engines. Both figures are better than average for the segment. 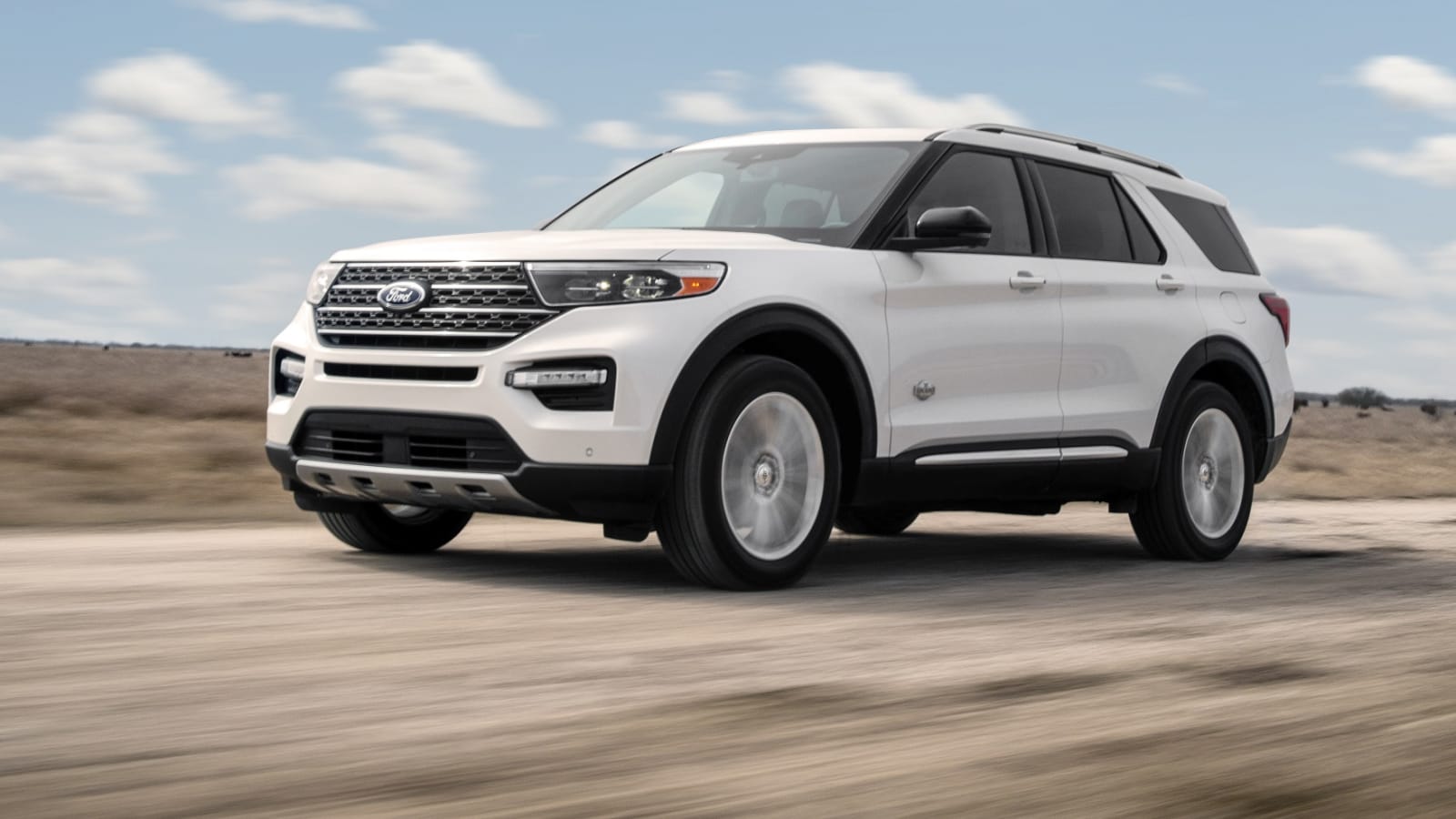 Not surprisingly, the Explorer's driving feel differs depending on engine and drivetrain choice. Acceleration is strong in the base engine and we don't think you'll miss having a V6. Of course, acceleration is comparably rapid with the Explorer's turbo V6 upgrades, but they come at such a high cost that most potential buyers will find them largely a moot point. Luckily, we found a rear-wheel-drive, four-cylinder XLT to exhibit greater agility and eagerness to change direction than the more powerful Platinum. Having a lighter engine over front wheels unburdened by drive shafts tends to do that. Now, we wouldn't go so far as to call any of the non-ST models sporty – the suspension is a little too springy and the steering too uncommunicative for that – but it nevertheless provides a little more driving verve and connection than is usual for the segment. If there's one reason to choose an Explorer over a Telluride or Palisade, this is it.

The Explorer ST indeed steps things up with greater suspension composure, while not ruining the ride. The steering doesn't improve, though, and in general, we found the ST to be too big and heavy to be considered a true performance vehicle. It's also not quite over-the-top enough to match the joyously absurd Dodge Durango SRT. On the other end of the spectrum, we found the Timberline to be a nice addition to round out the lineup. It’s not as rugged as a Bronco (for better and for worse), but it’ll get you through some gnarlier stuff than the regular Explorer will, and the on-road penalty is minimal-to-non-existent.

The Hybrid, meanwhile, impresses with its refinement, performance and lack of drivability tradeoffs. However, its fuel economy advantage is so negligible that it's really hard to recommend unless you do the vast majority of your driving in stop-and-go traffic where its notably better city rating will actually make a difference.

What other Ford Explorer reviews can I read? 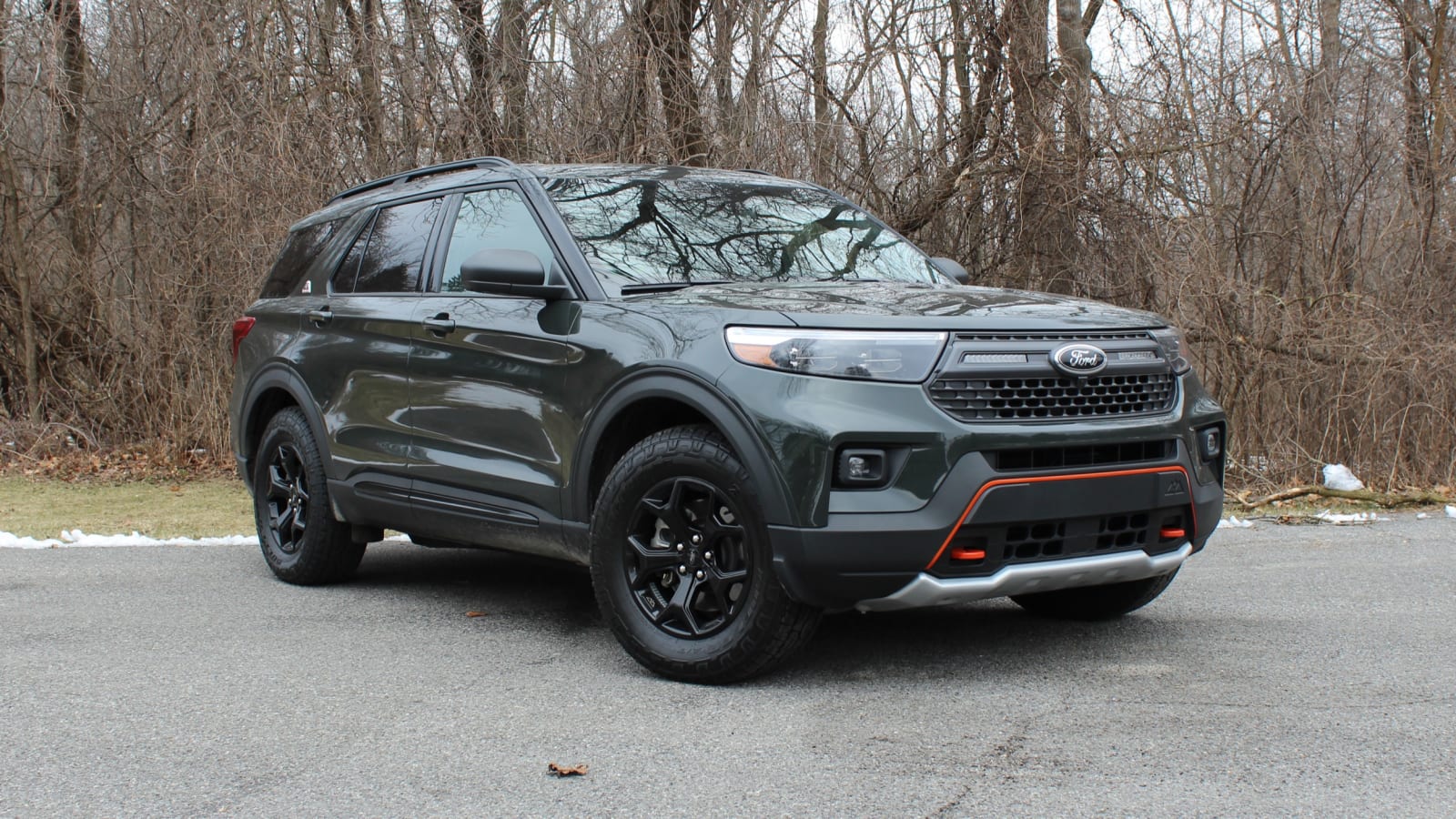 Covers more in-depth engineering, design and driving impressions of the 2.3-liter Explorer and 3.0-liter Explorer Platinum. This also includes our test of driving the Explorer with a trailer. Our first driving impressions of the Ford Explorer Hybrid, including information about its gasoline-electric powertrain. Our first time behind the wheel of the high-performance ST. Though we're glad they didn't make it uncomfortably hardcore, we also don't think it goes far enough in terms of over-the-top speed and drama. 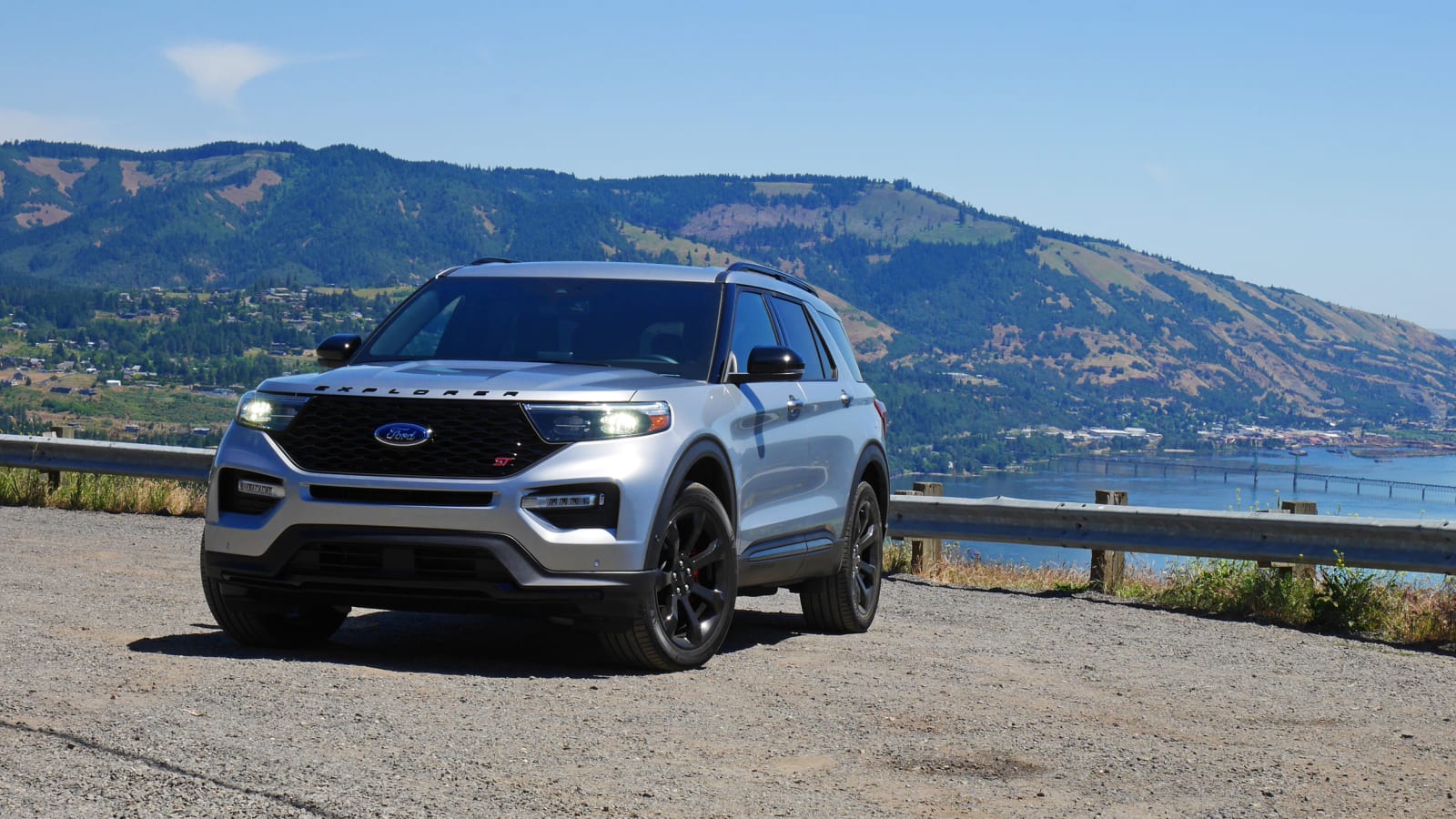 2020 Ford Explorer ST vs 2019 Dodge Durango SRT: How they compare on paper

See how the engine specs and dimensions of these two high-powered family haulers compare to each other. 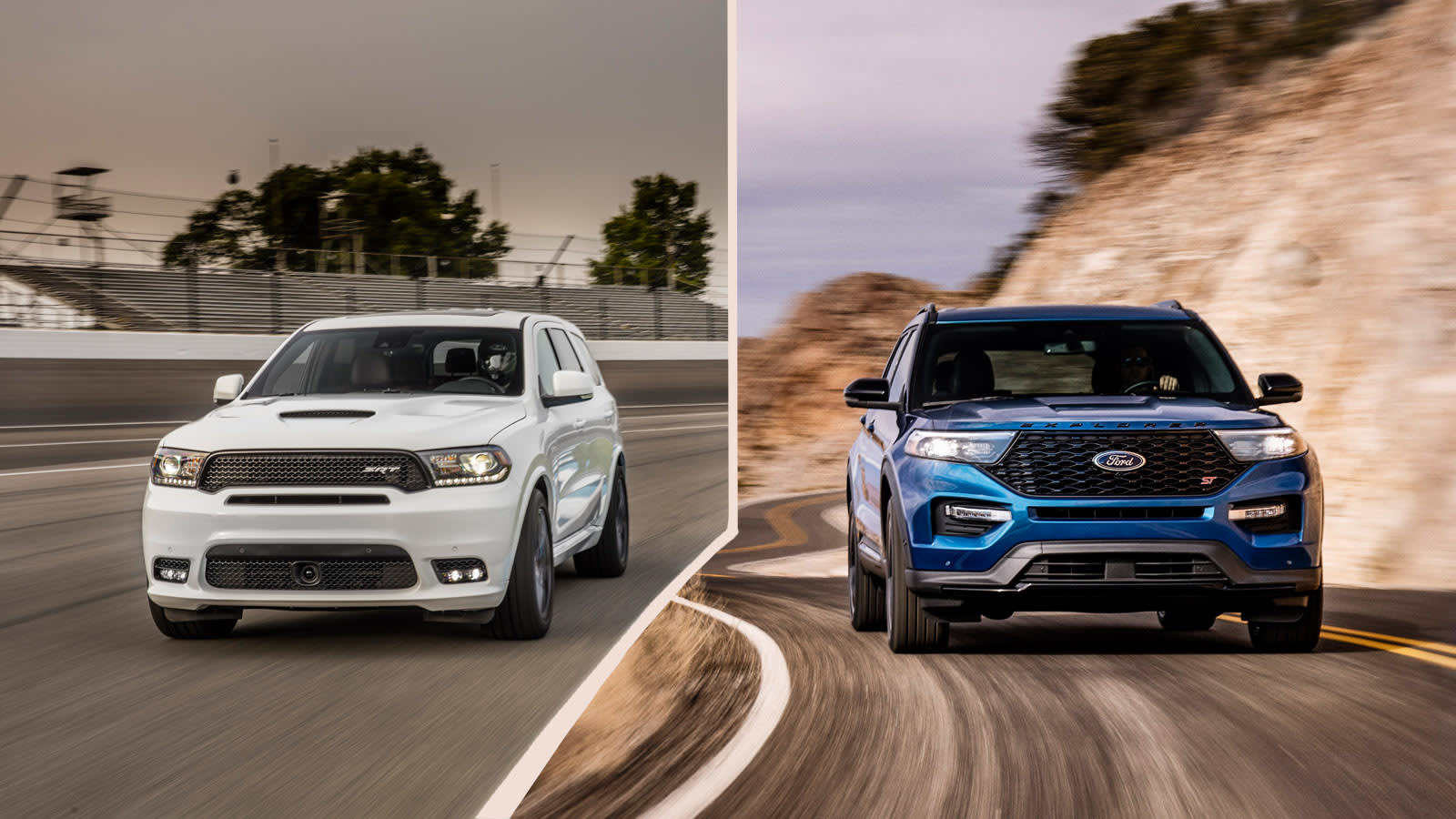 Obviously, the other trim levels add extra equipment. There are also numerous options packages. To list them all would result in this review challenging the works of Tolstoy for length. To make things easier, you can find a complete breakdown of features, specs and local pricing here on Autoblog for the 2023 Explorer.

All-wheel drive is a $2,000 option on top of all the prices listed below.

What are the Explorer’s safety ratings and driver assistance features?

The 2023 Explorer's standard Co-Pilot360 suite of safety features includes forward collision warning with pedestrian detection and automatic emergency braking, lane-keeping assist, blind-spot and rear cross-traffic warning (this is optional on most competitors), automatic high beams and a rearview camera with a built-in lens washer (if you're in the middle of a cruddy winter, you should appreciate this one). The available Co-Pilot Assist+ package adds adaptive cruise control. Reverse automatic braking is available on upper trim levels.

The Explorer got a perfect five stars in all government crash tests performed, plus a solid four-star rollover rating. The Insurance Institute for Highway Safety named it a Top Safety Pick+ in 2022 due to its best-possible performance in all crash tests and top scores for its standard accident avoidance tech. Its headlights were rated "Acceptable," thus allowing it to get the Top Safety Pick+ prize.