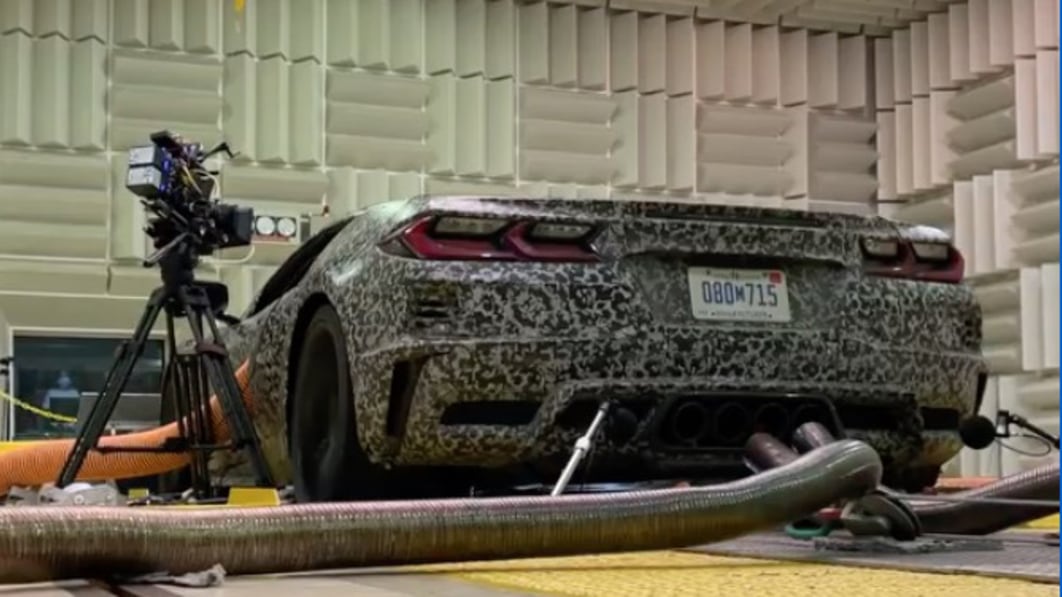 The 2023 Chevy Corvette Z06 is nearly upon us, but just before its official Tuesday reveal date they've given us a sneak listen to its glorious exhaust note. The sampling comes via automotive YouTuber Emelia Hartford, who is working with Chevrolet to debut the first mid-engined Z06.

The first showed a C8 Z06, still wearing its camouflage, in an anechoic chamber. It does a slow climb to the flat-plane 5.5-liter V8's stratospheric 8,600 rpm redline. Every time you expect the note to crescendo, the Chevy delivers more in a seemingly endless escalation.

A second video has Hartford plugging her ears by the quad exhaust as a driver spikes the go-pedal. The revs peak as instantaneously as the most exotic supercars, sounding more like like a BMW or Lexus V8 rather than the low, lumpy-cammed thump-thump of traditional Detroiters or the powerful but frankly tinny sound of the C7 Z06.

The engine is related to the V8 found in Chevy's Corvette C8.R race car, which actually has less power and a lower redline at 7,600 rpm. Those are due to rules in the racing series in which it competes, not an engineering limitation.

The car in the anechoic chamber looks closer to the Z06 that Chevy has officially shown, as it lacks the giant wing seen on the Z06 in spy shots and in the second video. Both spoilers differ from the one found on the base Corvette.

In addition to the wing, the Z06 will have more aggressive front and rear fascias. The side intakes feeding the mid-mounted V8 appear to take a different shape as well, wider and contrasting colors in their housing.

The V8 sounds befitting of a mid-engined supercar, and foretells good things about the Z06. We'll know more when the official release takes place tomorrow.