Chevrolet Corvette Z06 are, the 5.5-liter flat-plane LT6 V-8 engine sitting behind the driver is the star of the show. Unfortunately for new Z06 owner Marco Garcia, the motorsport-derived engine in his Corvette Z06 failed after traveling just 52 miles on the initial delivery drive.

Much More on the Z06

Garcia purchased the black-over-red Corvette Z06 1LZ on December 23 from Covina Hills Chevrolet in Covina, California, according to his YouTube videos. The in-demand sports car carried a sticker price of $113,975, but documentation fees and dealer charges saw the final sales price reach $182,457.38. Garcia has owned two Stingrays at this point, and he arrived to purchase the Z06 in his modified C8. With the purchase process complete, one of the salesmen at the dealer offered to follow Garcia back to his construction yard with said Stingray. Garcia took them up on this offer and agreed to drop the salesman back at the dealership following the exchange.

After dropping the Stingray at the yard, the salesman jumped into the Z06 for the relatively short trek back to the dealership. Garcia noted in his follow-up video that the two enjoyed a few gentle pulls on the ride but didn't push the car too hard. Garcia further noted that he is already quite familiar with the break-in procedure for the C8 platform due to his previous ownership experiences. Shortly after he returned the salesman to the dealership, things went horribly wrong.

Garcia noticed a lack of power coming from the engine and opted to pull off the highway to investigate. A check-engine light and some aggressive rattling noises accompanied the issue, which began with just 52 miles on the odometer, Garcia says. After walking into town to charge his phone, Garcia was told by the dealer that he couldn't tow the car back there that evening. Furthermore, OnStar struggled to help as they didn't have the proper warranty information yet for such a new car. Garcia was forced to tow the Z06 back to his construction yard that night.

Things didn't improve much the following day. OnStar sent a tow truck for the car on the 24th, but that truck wasn't authorized to return the car to the selling dealer. That created a new issue, apparently requiring Garcia to spend hours going through the OnStar service for assistance yet again. Once the car actually arrived at the proper dealership, a ton of error codes began popping up in Garcia's email inbox, sent via OnStar services. The most notable of these issues was listed as an engine and transmission system error, which you'd expect based on the audio found in the clip alone.

Garcia says he's had it with the situation, and that he is not interested in continuing his Z06 ownership experience. Once the car is repaired, he's planning to move it on to the next owner.

"Dead Z06 for sale pretty soon," said Garcia in the follow-up post. "I guess I'll probably try and fix it and sell it to someone else. It's a shame."

Since the moment the Z06 debuted, General Motors has been adamant that the LT6 V-8 is a bombproof engine. The LT6.R V-8 has been utilized by the Corvette Racing C8.R for a few years at this point, with the street motor featuring an almost identical top-end design. That said, large-displacement flat-plane V-8s are known to be tricky, as was previously highlighted by Ford's Voodoo V-8 and its vibration concerns.

A GM spokesperson confirmed to R&T that the company is aware of the incident involving this Z06 and is actively looking into the situation. As is common practice with this kind of failure, GM will likely tear down this motor to figure out what went wrong with this specific example.

Hopefully this particular LT6 was just a bad egg. As of right now, this problematic example appears to just be a small drop in the bucket as owners continue to take their new Z06s home. 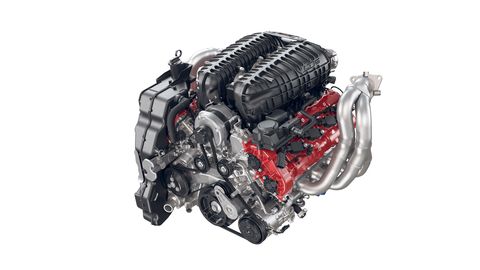