SPARTANBURG, S.C. – I don’t speak much German, but I know a message auf Deutsch when I hear it. At the first media drive of the 2023 BMW X7, engineers and executives revealed the internal name for the brand’s biggest and most-luxurious people hauler: Der Souverän, or, “The Sovereign.” This came even as BMW nodded to the forthcoming appearance of an all-new 7 Series sedan and its i7 electric offshoot, cars that in any other era would be the unquestioned flagships of a luxurious fleet.

In a market that now puts SUVs on a tall-riding pedestal and treats sedans like soil-tilling peasants, the three-row X7 has clearly usurped the 7 Series throne, especially as King of America. Since its debut as a 2019 model, this South Carolina-built challenger to the Mercedes GLS-Class, Range Rover and Cadillac Escalade has found 47% of its global buyers in the United States with another 28% coming from China. Only 2% found homes in Germany.

With one eye to protecting that throne, the X7 receives an especially robust refresh for 2023. Decisive upgrades include new inline-six and V8 engines, both with a 48-volt mild hybrid assist for added efficiency, reduced emissions and a helpful shove of electric torque. The X7 xDrive40i model (starting from $78,845), brings 375 overachieving horsepower and a peak 393 pound-feet of torque from its turbocharged 3.0-liter inline-six. That’s a jump of 40 horses and 67 pound-feet, but it also runs the more efficient Miller cycle and features exhaust valves that can close during engine shutdown to reduce torque on overrun by about two-thirds. This allows the hybrid generator to absorb more regen energy for the 48-volt battery.

For the X7 M60i (from $104,095), a twin-turbo 4.4-liter V8 amasses 523 horsepower and 553 pound-feet. That’s unchanged from before, but BMW engineers say the mild-hybrid system supplies noticeably more torque to fill in any V8 lag or power gaps. Based on the M Division’s wicked S63 unit that first powered the X5M and X6M, the V8 tucks dual-scroll turbos within “Hot Vee” cylinder banks. There’s a cross-bank exhaust manifold and a strengthened crankshaft to handle the gut-wrenching torque.

There’s a new eight-speed automatic transmission, a strikingly redesigned dashboard with BMW’s sleek Curved Display, and the latest iDrive8 interface that isn’t exactly a step forward. Standard gear now includes the previously optional panoramic sunroof with a separate panel over the third row; and top-shelf heated-and-cooled Comfort seats up front. There’s a raft of new driver-assistance tech, reams of optional packages (such as M Sport and Sport Pro), and a cool Sparkling Copper Metallic paint that embeds copper particles in a blue-gray coat. 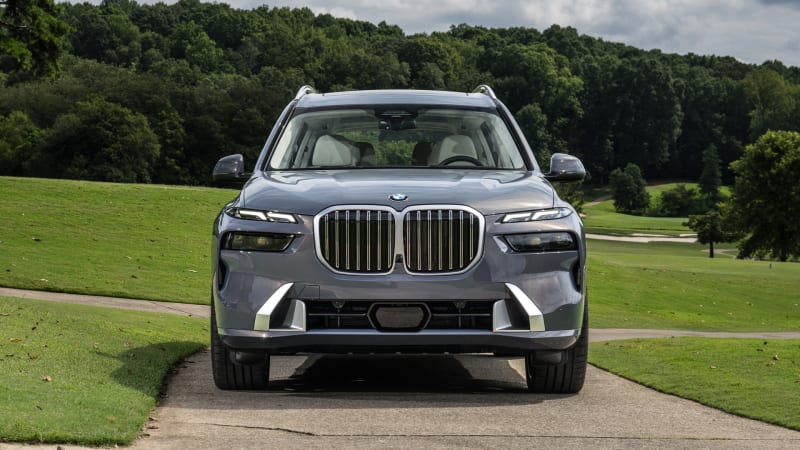 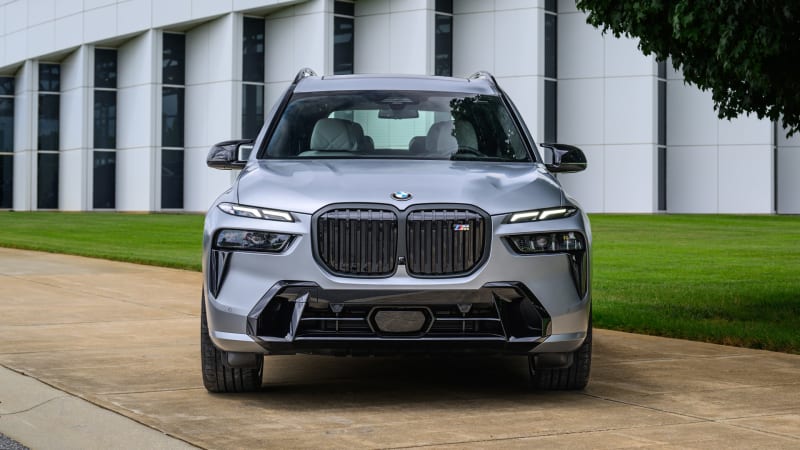 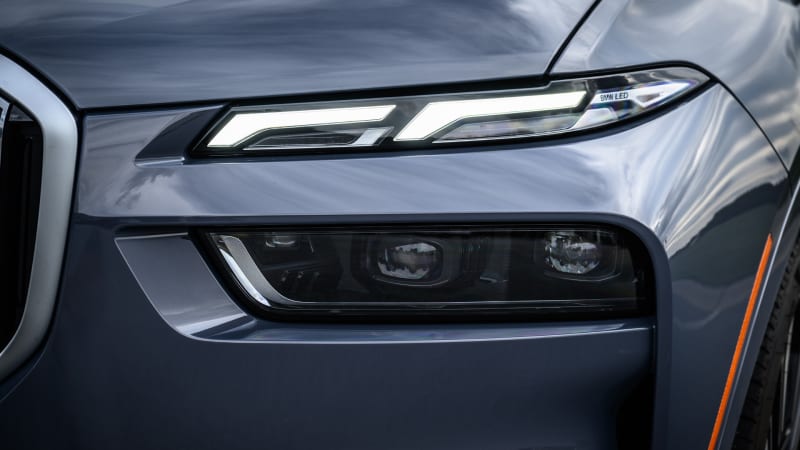 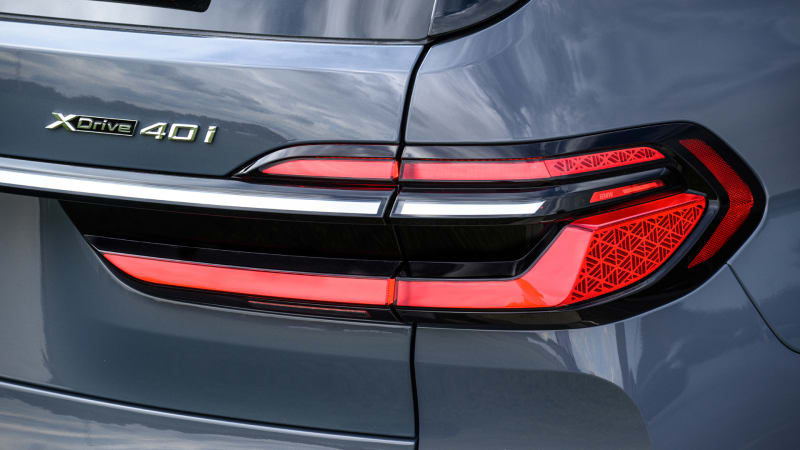 A mid-cycle facelift includes an extensive nip-and-tuck up front. Stacked LED lighting puts a squinty pair of DRLs and direction markers up top, with larger adaptive matrix headlamps below. BMW’s familiar overweening kidney grille bulges in between, at least vaguely proportional to the chunky SUV trailing behind. “Iconic Glow” lights now cascade from the grille. At the rear, ultra-slim 3D taillamps are bisected by an elegant chrome strip below a glass cover. But it’s the four-eyed front end that has caused consternation among self-appointed BMW design critics. Despite familiar piling on from the automotive herd, the X7’s style isn’t remotely offensive, at least by big-and-tall SUV standards. If anything, the X7’s Bavarian-bus exterior remains as perfunctory and unremarkable as before, which may ultimately be a bigger sin. It’s here that the Range Rover presses its biggest advantage, its haute couture exterior (and interior) out-styling the BMW by a margin as wide as the London Bridge.

Hopping aboard an M60i for a run from Greenville to BMW’s Spartanburg factory, we’re met by a cabin resplendent in a two-tone upholstery combo of Atlas Gray and Ivory White. This “BMW Individual” treatment lavishes seemingly the entire cabin in fragrant Merino leather, with lovely quilting that recalls a Gucci bag. Others will prefer new animal-free “Sensafin” upholstery standard on the xDrive40i in four hues, but its faux leather left me cold.

For either model, the operating word is “magisterial.” The X7 pampers occupants to the Nth degree, and it must be the most athletic three-row SUV yet created. The all-new Range Rover is highly capable, but even it can’t match the BMW’s buttoned-down confidence in curves. Escalade? Mercedes GLS-Class? Forget it. 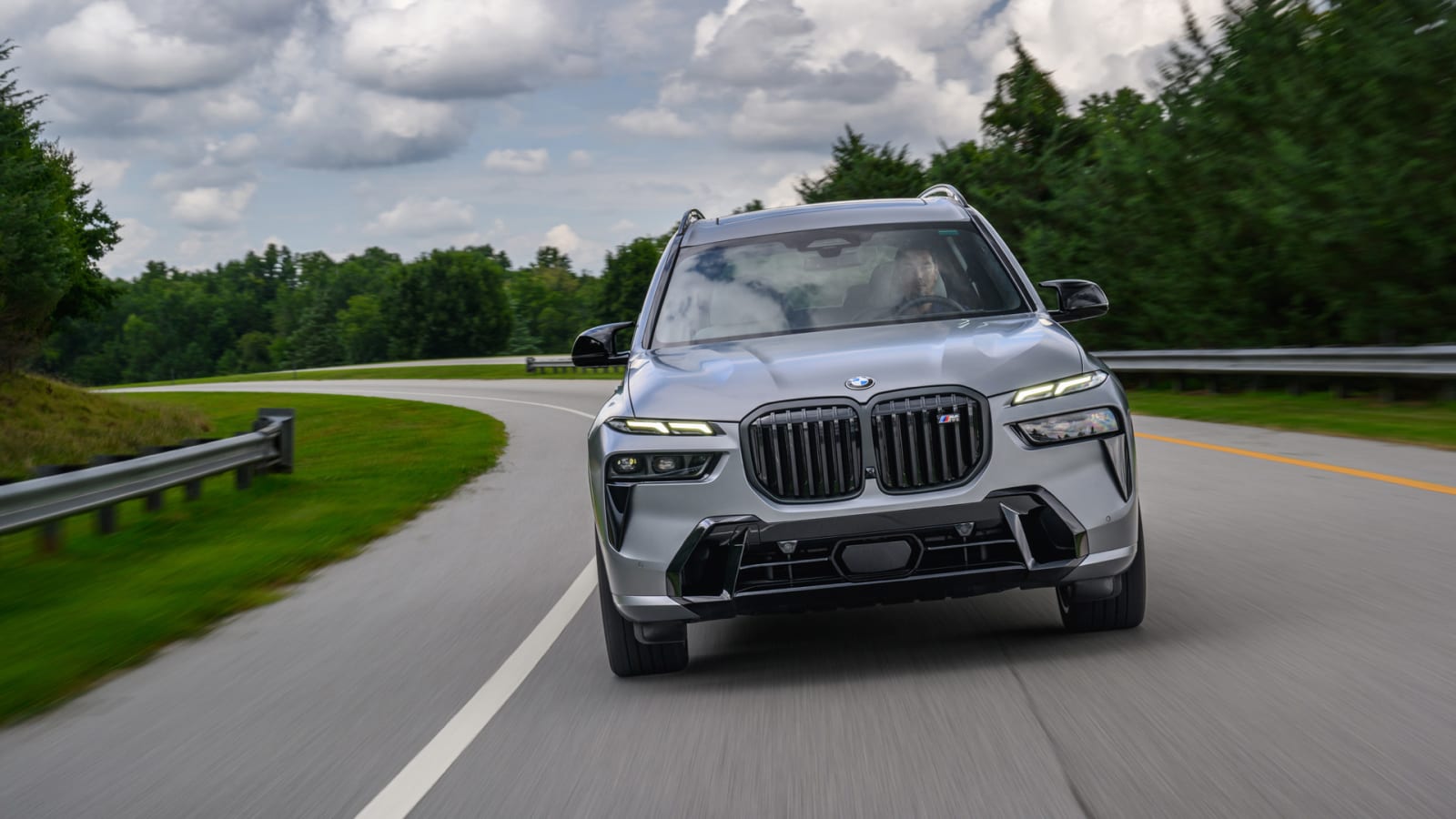 On the Perkins Highway, a ribbony two-laner skirting the Pisgah National Forest, the M60i dispatches even Miata-style corners with no lumbering or complaints. Steering is smartly weighted, but there’s still too little feedback. It also combines with a rear-axle steering to improve maneuverability. A dual-axle, adjustable-height air suspension delivers a sumptuous ride, even on available 23-inch, diamond-polished wheels (a first for BMW) that stuff the arches to bursting. Executive Drive Pro, standard on the M60i, flattens the body via active roll stabilizers and takes into account information from a camera, the navigation system and analyzing driving style to proactively adjust the suspension of upcoming curves or broken pavement.

Stated power and acceleration figures can feel as sandbaggy as some other BMWs. An automated launch flings the big X7 ahead with slam-bang violence, defying a company estimate of a 4.7-second run from 0-60 mph. The seat of my pants says it’s more like 4.2 or 4.3 seconds. This engine is a WWF star in a PBS body, taunting and crushing lesser SUVs with every prod of a loafer. For the xDrive40i, BMW cites a 5.8-second trip to 60 mph, another seeming understatement of the bountiful, flexible power on tap.

The V8’s basso thrum is often smothered under cashmere layers of sound deadening, but Sport driving modes tease out more of a rich and tuneful sound. That’s ultimately a good thing: The X7 remains one of the most quiet, Zen-like experiences on wheels. 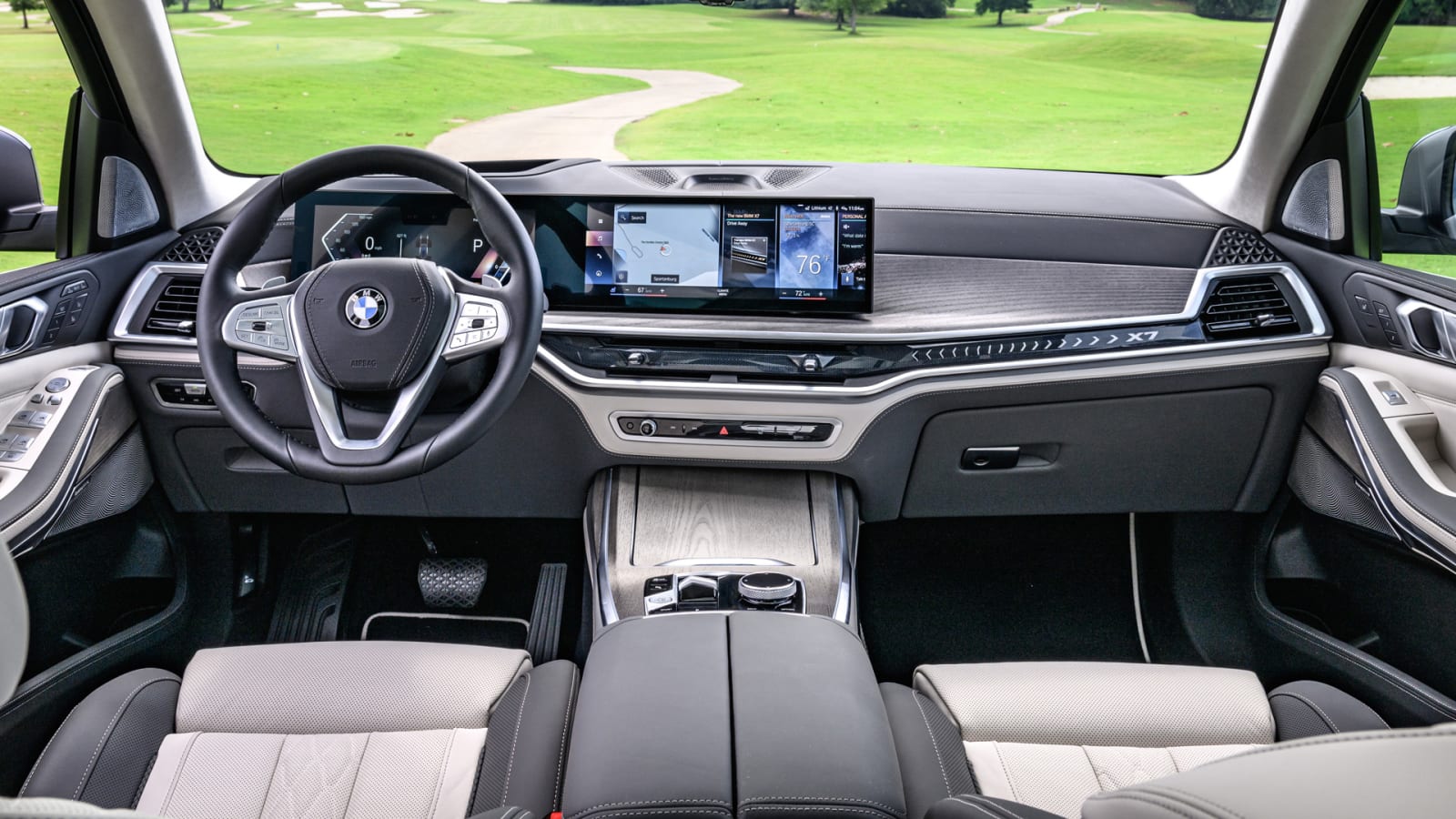 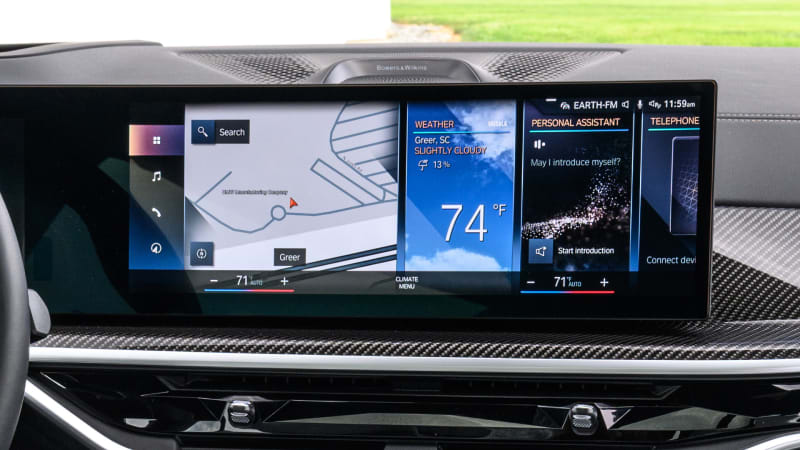 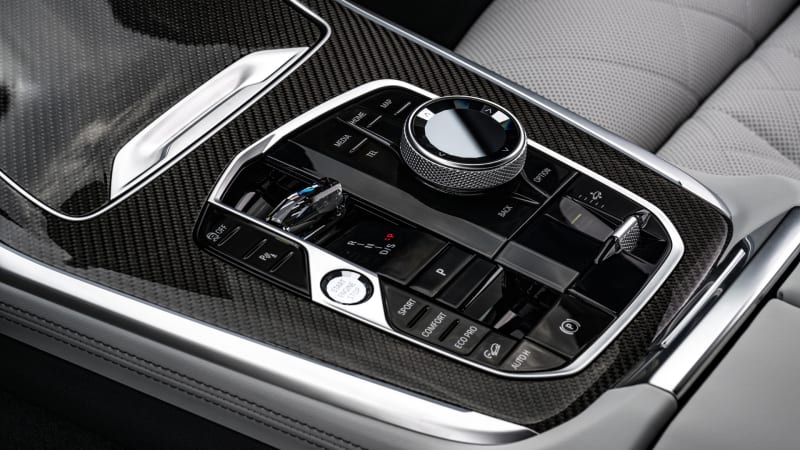 Easing into a cruise, we admire a modernized ridge of dashboard, striped by an ambient light bar with illuminated X7 graphic. BMW’s Curved Display sits atop, melding a 12.3-inch

iDrive8 supports all the goodies, from a slick head-up display to augmented reality navigation, new traffic-light recognition and optional smartphone-based Digital Key. The system looks great, but I’m in agreement with Autoblog editors Palmer and Riswick that the system seems like a step backward in terms of intuitive operation. You can dive deeper into iDrive8’s issues here.

Driver assistance features include limited hands-free operation on divided highways. The robotic assistant worked like a charm in snarled rush-hour traffic, but unlike GM’s industry-best Super Cruise, only works at speeds up to 40 mph. At even slower speeds, we experienced the new Maneuvering Assistant: Like dropping a trail of bread crumbs, drivers can train the Assistant to memorize up to 10 complicated “maneuvers” of up to 200 meters each. Imagine the route from a gated estate to a final parking space in the stables, or just a tricky condo development. Roll up to the memorized starting point, as we did on a cone course at Spartanburg, and the BMW will manage its own steering, throttle and brakes to complete the trip autonomously. It’ll even shift into Forward or Reverse to complete the memorized course. That joins assistants for parking, trailering and reversing. 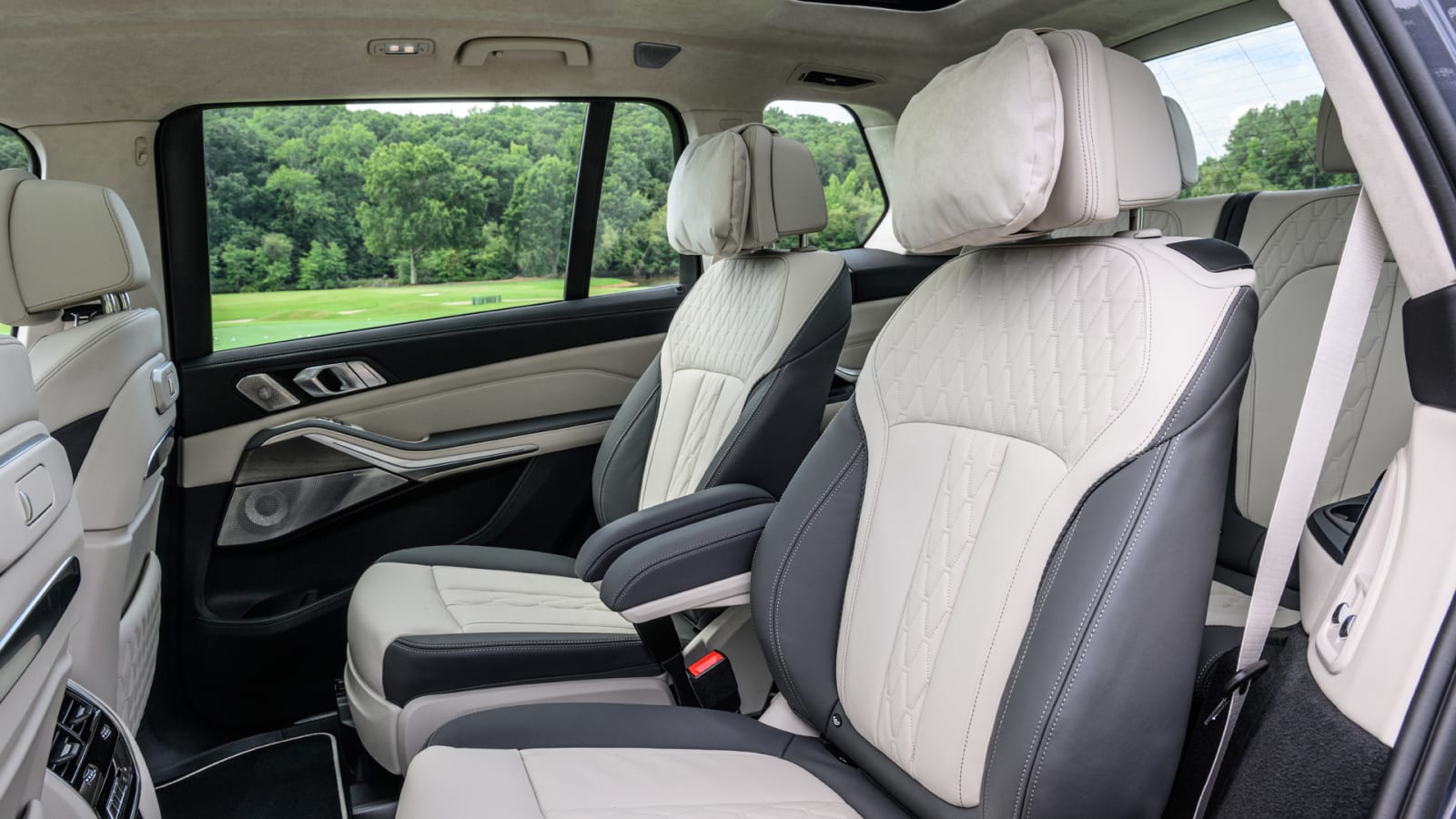 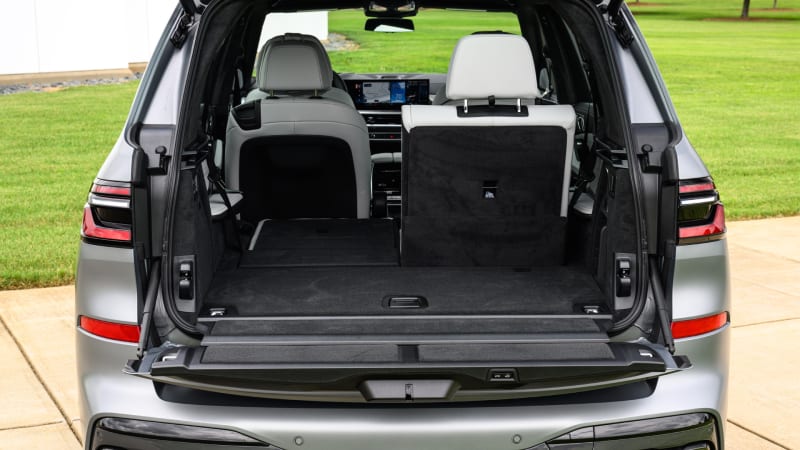 Accommodations are equally plush. One button in the hatch maximizes cargo space by power-folding every seat in the second and third rows. Another maxes passenger space, boosting the split third-row chairs and sliding the second row for peak legroom — either a three-passenger bench or a pair of swanky captain’s chairs with folding armrests. The Bimmer’s third row remains reasonably comfy for even larger adults, and integrates USB-C ports or personal temperature and airflow settings via an optional five-zone climate control.

We swap into an xDrive40i model for a return trip to Greenville. I unwind the “base model” X7 from a curling overpass into a rushing flow of freeway traffic — and nip 100 mph on a vector to the fast lane, a bit shocked to see three digits when I glance at the speedo. Yes, this sucker is fast. And less weight over that driven front axle makes the 40i feel a touch more responsive as well. As with Mercedes’ wonderful new inline-six, BMW’s straight-liner feels strong enough to render the V8 (arguably) superfluous; aside from moms or dads determined to traumatize offspring and in-laws in the rear rows.

Maybe such savings won’t matter to those who can afford something convincingly called the Sovereign. Either way, it’s good to drive the king.