The last time we saw a 2023 BMW M2 wearing M Performance Parts on Instagram, the picture came from a random motorist at a stop light waiting behind a camouflaged M2 prototype. That angle revealed the high wing and even more aggressive diffuser housing angled quad pipes. BMW is now ready to do its own boasting about some of the aftermarket kit, with the caption, "The fine details of driving excellence, waiting to be revealed." The M division uploaded two images of a camo'ed M2 to Instagram, taken from the side. This time we get another look at the high wing that will stand proud of the ducktail spoiler the coupe wears from the factory. There's also a close-up of the special wheels, the 1000M forged units in Matte Gold Bronze that can fitted to the larger M3 and M4 for anyone willing to hand over many thousands of dollars. 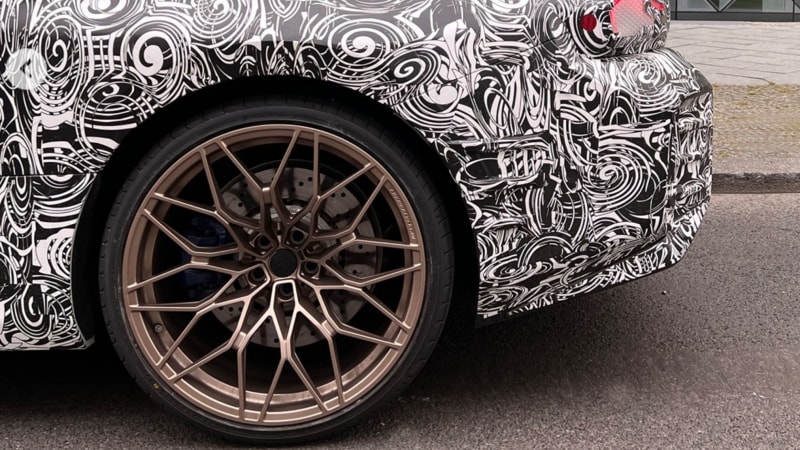 Those wheels are thought to hang at the end of a wider track in order to best manage the suspected 450 horsepower being sent through them. That, in turn, has made for even thicker haunches courtesy of punched-out fenders.

This year's Goodwood Festival of Speed celebrates 50 years of the BMW Motorsport division. M boss Frank van Meel said of the event, "I am particularly looking forward to unveiling a certain vehicle to the world’s public for the first time — a vehicle we have been waiting a long time for." Since we know the M4 CSL is showing at this month's Concorso d'Eleganza Villa d'Este, we suspect he could be referring to the new M2. We called the M2 CS "brilliant" and a "pocket Hercules," and four years ago, M branch called that last-generation M2 its "strongest growth driver." Funny what a halo car that recalls the glory of the brand can do. It'll be all eyes on England from June 23-26.