The existence of the 2022 Toyota Tundra Capstone perfectly illustrates the point that most of today’s full-size pickup buyers aren’t just interested in a barebones machine with a truck bed. For more and more buyers, trucks need to double as luxury cars, complete with all the leather-lined and wood-plated trimmings. Such is the case with the Capstone, and while it has all the features and highlights we’ve come to expect from vehicles in this pricey and potent pickup class, it’s going to have a tough time winning over buyers who are cross shopping other range-topping, ultra-luxury pickups like the Ford F-150 Limited and upcoming GMC Sierra Denali Ultimate. But we’re pretty sure that’s not really the point, anyway.

The Capstone — in case you’re wondering, Merriam-Webster defines the word as “the high point” or “crowning achievement” — sits at the very tippy top of the Tundra lineup. The trim level also extends to the new 2023 Sequoia, but Toyota so far isn’t using the trim on other smaller truck or SUV models.

Before we go any further, we’ll briefly cover what stays the same. The Capstone shares its i-Force Max hybrid powertrain with other Tundras. It produces the same 437 horsepower and 583 pound-feet of torque regardless of trim level, and sends those ponies to all four wheels through a 10-speed automatic and part-time transfer case with high and low gears. The maximum tow rating for Capstone models is a respectable 10,340 pounds; max payload stands at 1,485 pounds. It will solely be paired with the CrewMax cab and 5.5-foot bed.

So the Capstone numbers and hard data points don’t move the needle any further than other Tundras. It’s set apart from lesser Tundras by virtue of its chrome-laden exterior, unique 22-inch wheels, street-oriented low-profile(ish) Bridgestone Dueler tires, and the fact it gets pretty much everything that’s optional on a Tundra as standard equipment. It sits above the already pretty luxurious Tundra Platinum and 1794 editions. This strategy follows a similar trend from Ford with its Limited grade and GMC with its Denali Ultimate. Ram doesn’t go as far with its line; its Limited Longhorn would compare with the Tundra 1794 and its Limited trim with Toyota’s Platinum. Chevy so far hasn’t announced a High Country Ultimate like GMC has with the Denali.

Toyota focused most of its Capstone efforts on the interior. Our favorite part of the Tundra Capstone are its leather seats. While they should probably offer a massaging function as its competitors do (Toyota reps admitted they are looking into offering those in the future), the semi-aniline leather feels great, looks spectacular in its Capstone-exclusive black and white hues, and adds interest with unique embossing and perforation patterns. The only other vehicle under the Toyota umbrella to get this quality of leather is the Lexus LS.

Another interior highlight is the Dark American Walnut trim. It features a matte open-pore finish that’s nice to see in a pickup truck, and is accentuated with brightwork and cool blue lighting that lends an upscale look and feel to the cabin. Additional sound deadening comes courtesy of acoustic glass in the front doors, but we don’t really think other Tundra grades are particularly loud, either. 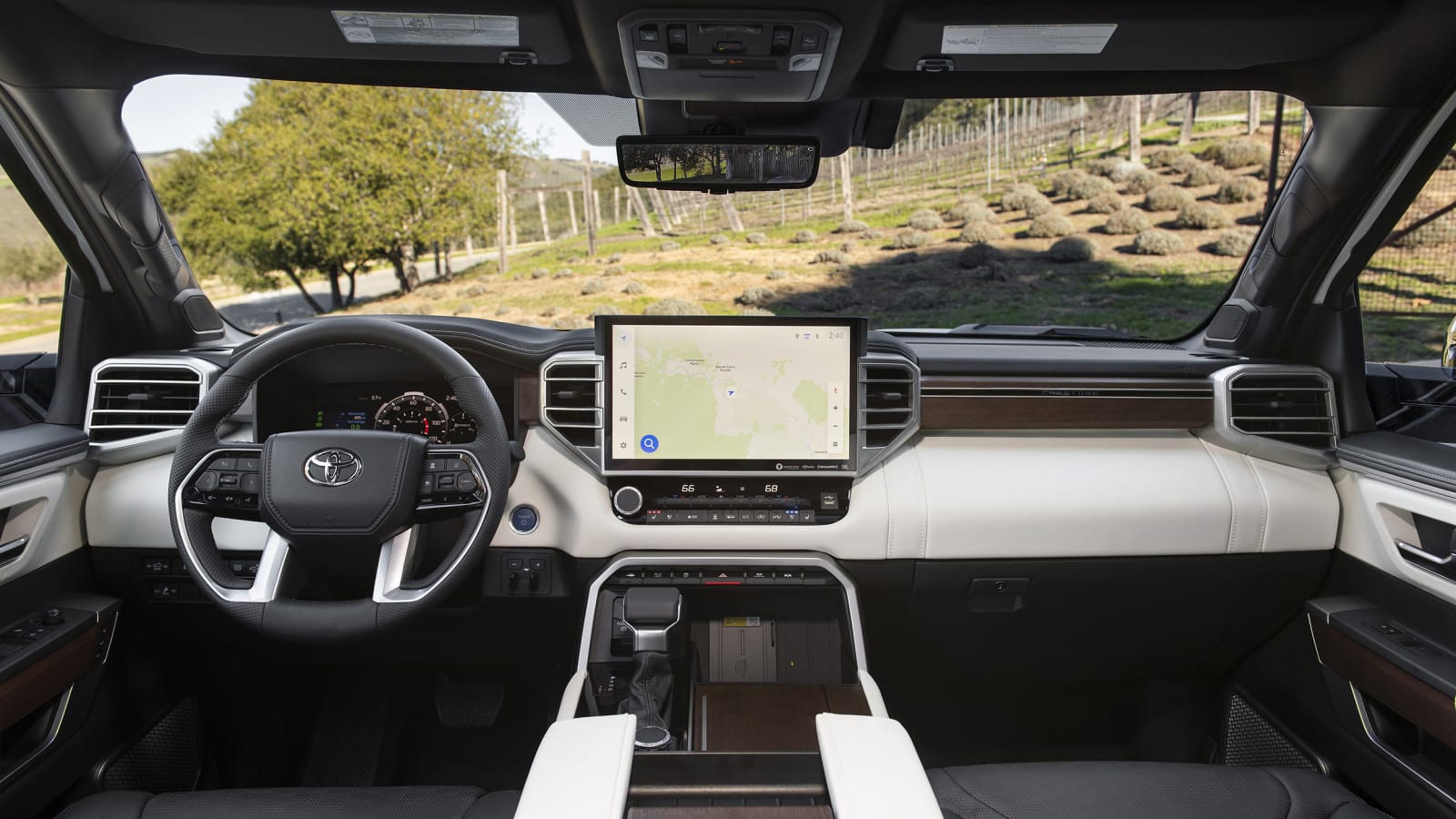 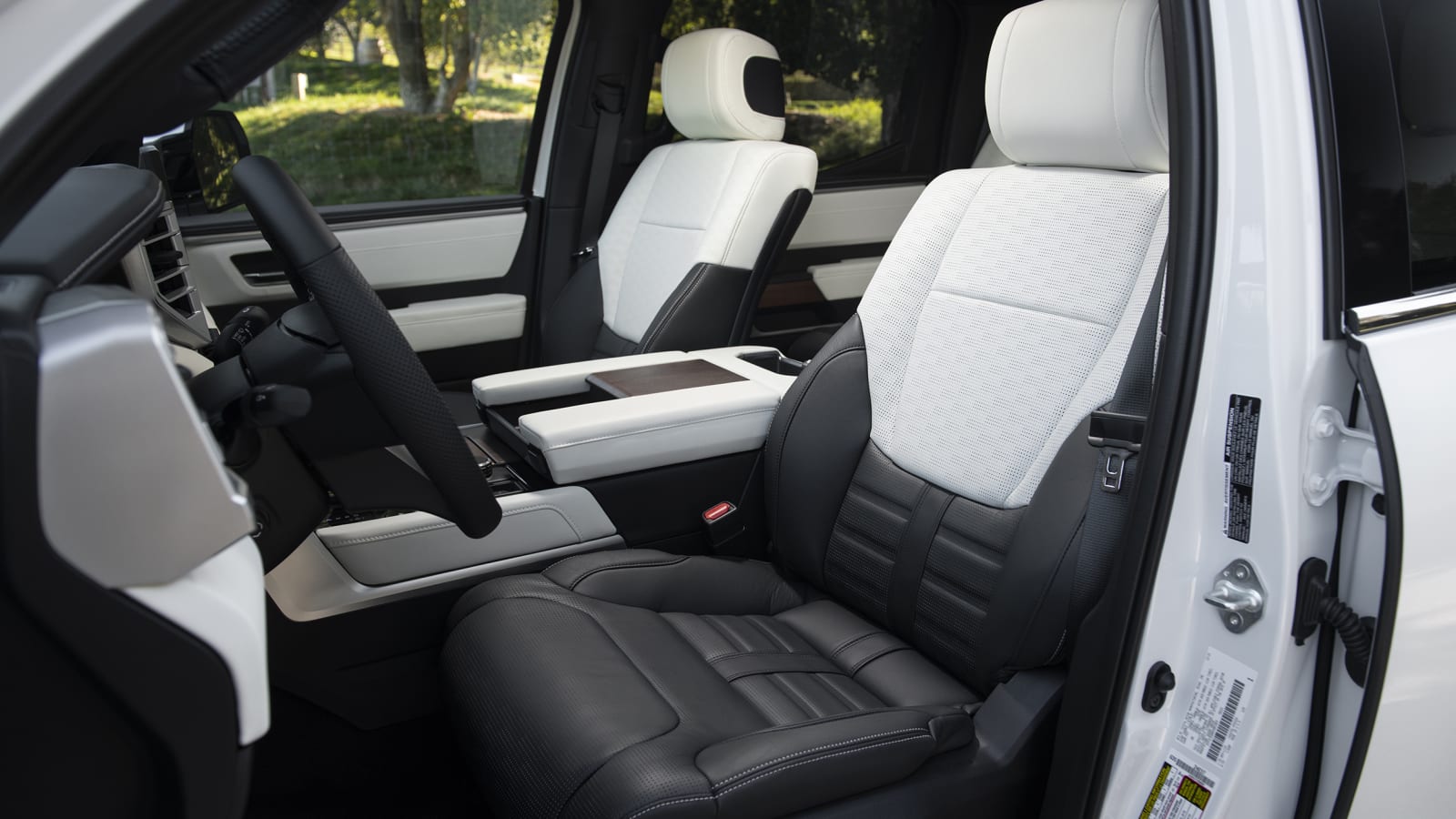 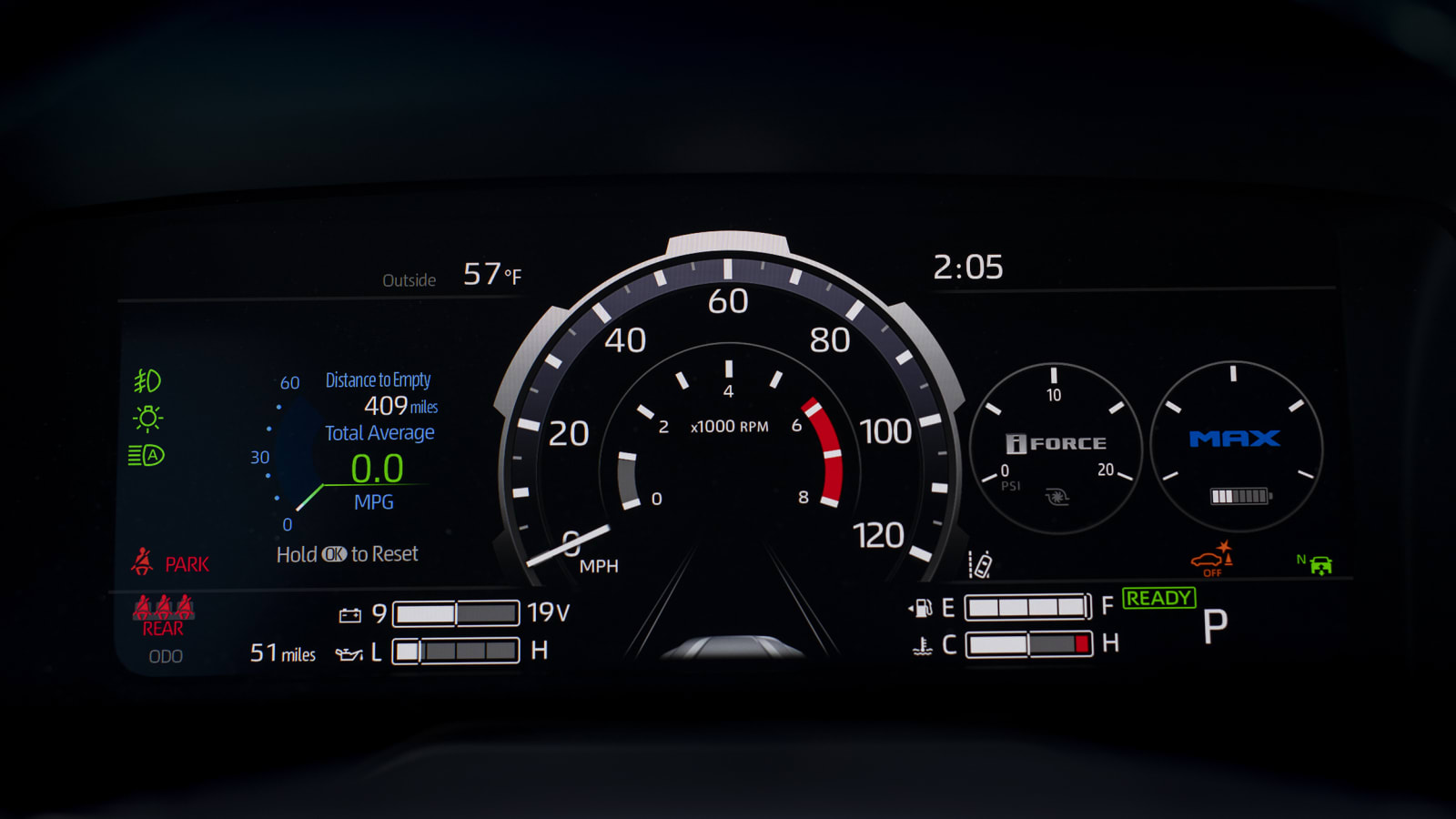 There aren’t any changes to the infotainment package. Toyota’s latest Audio Multimedia system is controlled via a 14-inch touchscreen, and while we appreciate its clean overall design and quick responses, we’re not fond of the fact it lacks a home screen. We also wish it were possible to split the large screen into multiple panels, which Toyota reps say would be possible to do if customers demand it in the future. We had similar complaints about the new Lexus infotainment system.

Those things may not matter to all users, though, particularly those who choose to use wireless Apple CarPlay or Android Auto instead. A 12.3-inch digital Multi-Informational Display is also standard, and it does a good job of displaying the very legible gauge cluster and several other customizable data fields. A 10-inch color head-up display is also standard.

It’s best to think of the Capstone as a Tundra first and a luxury truck second. It doesn’t drive any different from other less expensive variants, but that’s not a bad thing and it’s consistent with the rest of the ultra-luxe truck segment. You can read our full Tundra review here, but suffice it to say it drives like a fully modern truck and is much more refined in any trim level than the V8-powered Tundra it replaces. Courtesy of its coil-spring suspension and stiff, fully boxed frame, the 2022 Tundra is one of the smoothest-riding full-size trucks, with an overall relaxing driving experience the result. It may be a smidge less comfortable over broken pavement than a comparable Ram 1500, which would be our pick as the ride-and-handling truck to beat, but the Tundra is still up near the head of its class.

Adaptive Variable Suspension and load-leveling rear height control air suspension are available as the only notable options on the Capstone order sheet. The former of those suspensions does notably improve the truck’s ride with electronic valves that adjust damping on the fly without any attention from the driver. The load-leveling rear air springs come with the variable kit, or can be ordered separately for those who are only interested in the benefits they provide while towing or hauling heavy loads.

The Tundra Capstone’s standard I-Force Max turbocharged V6 hybrid powertrain is a solid improvement over the non-hybrid version. It’s more powerful — the single electric motor produces 48 horsepower and 184 lb-ft of torque — which doesn’t hurt, but the real benefit is that it provides an instant thrust at city street and highway speeds that you can feel from the seat of the pants. Since the 10-speed automatic transmission sits aft of both power sources, the electric motor can’t fill in the dips in motive force between gear shifts, and that’s a shame. The 288-volt nickel-metal-hybride battery also doesn't provide power to onboard plugs or generators, nor does the hybrid system improve the truck's tow rating. It does increase fuel economy, however.

According to Toyota’s internal testing (which has yet to be verified by the EPA, though we imagine it will be shortly), a rear-wheel-drive Tundra with the I-Force Max hybrid powertrain will return 20 miles per gallon in the city, 24 on the highway and 22 combined. Those are improvements of 2 mpg in the city and combined over the non-hybrid’s ratings of 18/23/20 (the lower-power SR grade also gets 24 highway but represents only 5% of total Tundra sales). Adding four-wheel drive knocks that down a bit to 19/22/21 with the I-Force Max versus 17/23/19 with the standard engine. Bringing up the rear in efficiency is the hybrid-powered TRD Pro off-road specialist with ratings of 19/21/20. 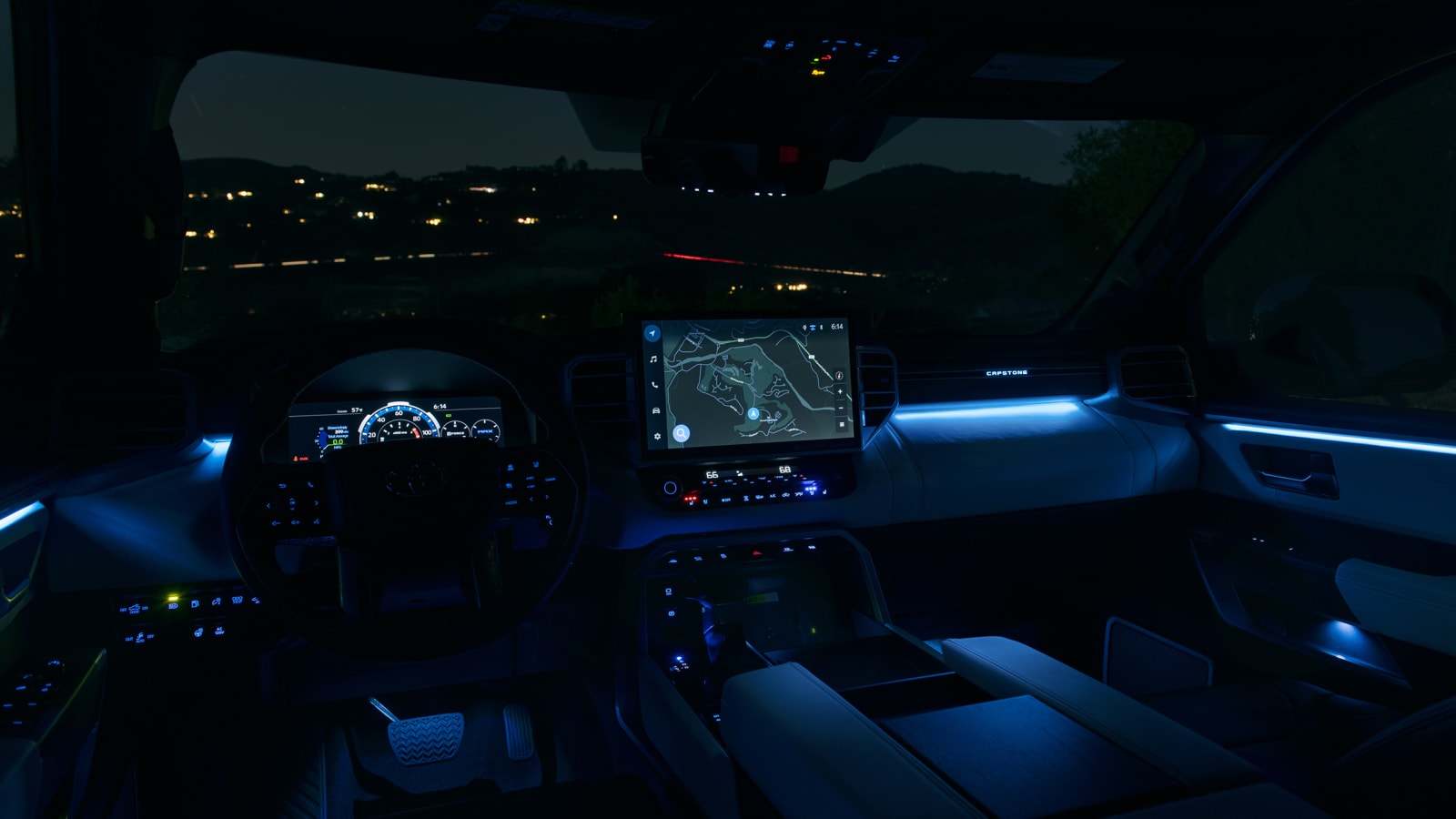 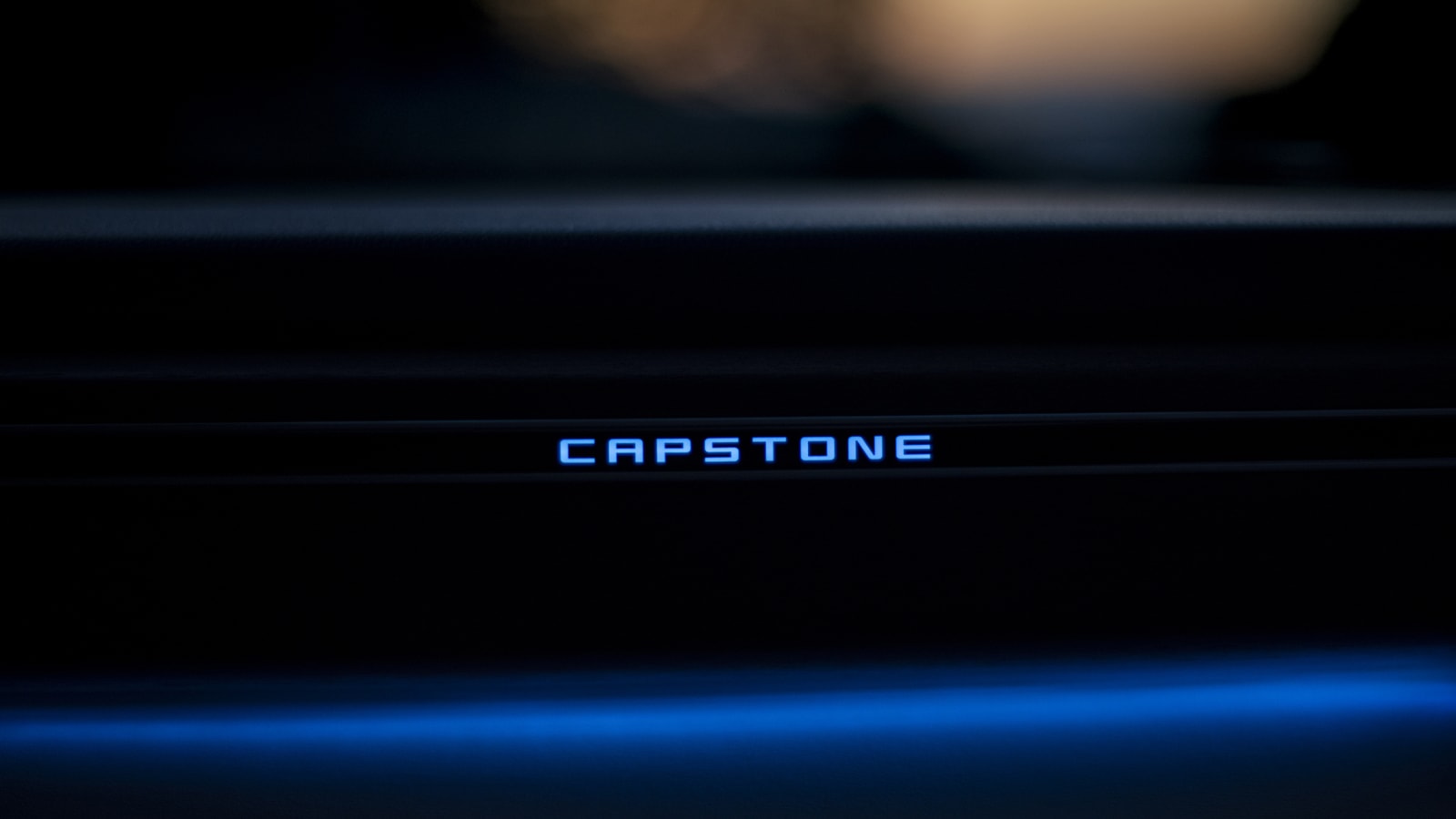 And that brings us to the cost. The cheapest Tundra for 2022 is a rear-wheel-drive SR Double Cab with a 6.5-foot bed for $37,645 including a $1,695 delivery charge. If you want the I-Force Max powertrain, you’re looking at a minimum of $53,995 for a Limited CrewMax, the larger of the two four-door cabins. Directly below the range-topping Capstone sit the fancy Platinum and Western-themed 1794, each of which will sell for just under $60,000 without any options, plus another $3,000 for four-wheel drive. The top-of-the-line Capstone with its standard I-Force Max, CrewMax configuration and four-wheel drive starts at $75,225.

In the heady world of premium luxury trucks, that sum is reasonable. The best-selling Ford F-150’s comparable trim is called Limited, and it starts at $76,030 and comes with Ford’s BlueCruise hands-free driving tech. Equipped with Ford’s optional hybrid engine (which also includes Ford’s 7.2kW Pro Power Onboard system that won Autoblog’s Technology of the Year award), and four-wheel drive, the Limited runs $81,355. GMC’s thoroughly refreshed Sierra Denali Ultimate will also include Super Cruise for hands-free driving, even when pulling a trailer, and should hit dealerships soon with a starting price of $80,395.

Toyota does not offer any sort of hands-free driving tech that would be comparable to Ford’s BlueCruise or GM’s Super Cruise, nor does it have any useful in-bed technology that could rival Ford’s Pro Power Onboard. In that way, it's in the same boat as the Ram 1500. Perhaps an even larger impediment Toyota has to overcome is the fierce owner loyalty that American truck makers have enjoyed for years. Recent data suggests that owner loyalty is less of an issue on the priciest of pickups like the Capstone, Denali Ultimate and F-150 Limited, but we think it’s best to think of the Capstone as a response to Toyota buyers telling the automaker that they are willing to pay more for an even more premium pickup. 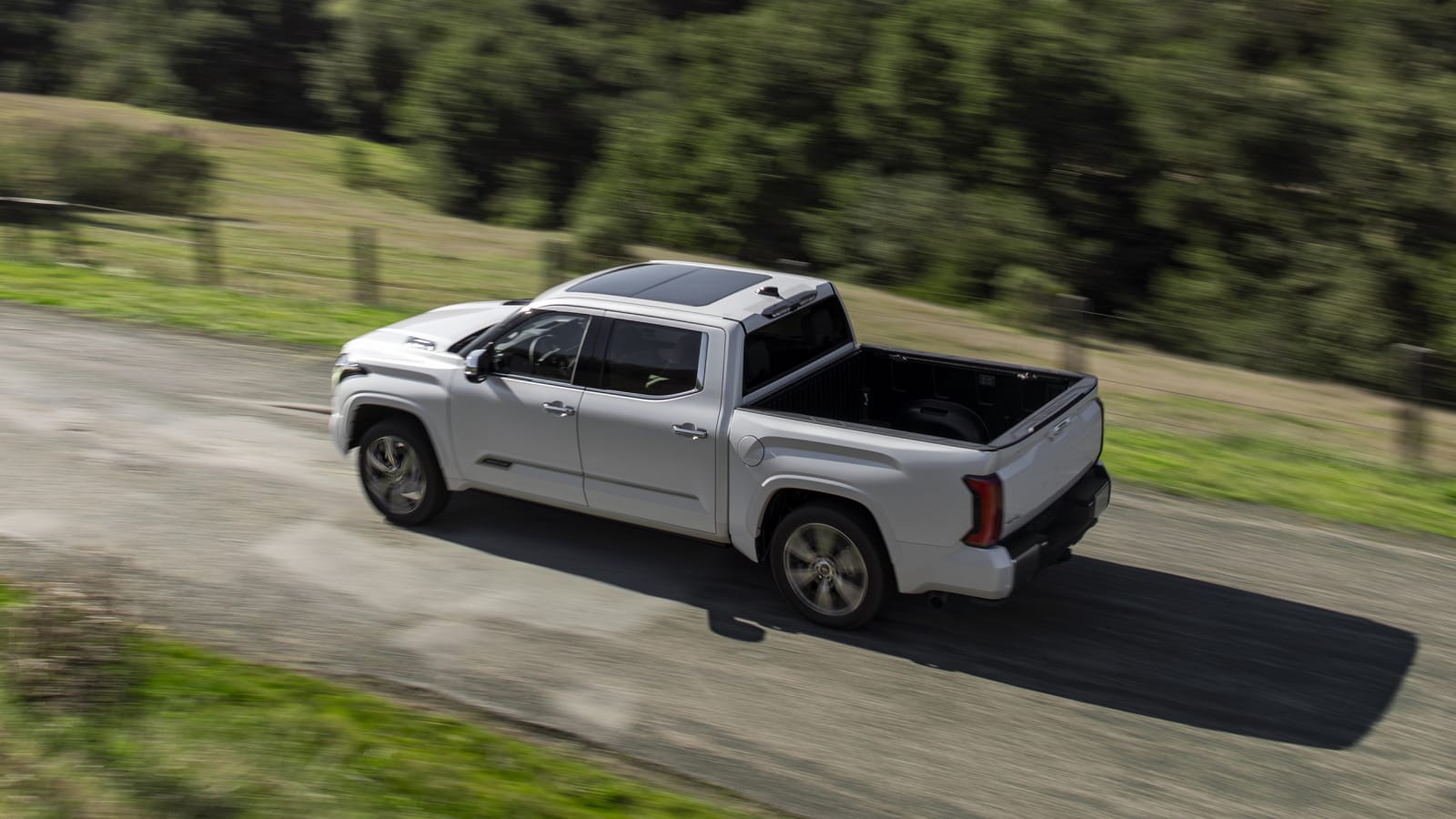 Looked through that lens, the Capstone is sure to be a winner for Toyota. It’s no secret that the pickup truck market has moved upmarket and that these luxury trucks and the prices they command bring larger profits to automakers than pretty much any other segment they compete in. Even if the Capstone only incrementally moves the needle on sales, which seems like the most likely scenario, it ought to be enough to keep loyal Tundra buyers with deep pockets from wandering elsewhere. If the overall package sways a few buyers from other brands, that’s icing on the cake. Best of all, there's enough new content in the overall package, particularly inside, that we think buyers looking for the fanciest Tundra money can buy will be happy to pay a few extra thousand dollars over the Platinum and 1794 to bring home a Capstone.