TROY, Mich. -- Like many off-roaders of a certain age, the Range Rover has matured and evolved. Conceived in the late 1960s as a rugged ute with British sensibility and taste, it’s grown into a design statement that showcases Land Rover’s latest technologies and most decadent luxury features. While Range Rover will always conjure the notion of tartan-clad hunters and loyal yellow dogs, it’s immediately clear the fifth-generation model advances Land Rover's quest for new customers.

My jaw drops when I catch my first glimpse of the 2022 Range Rover First Edition in my driveway. Dressed in Sunset Gold Satin finish -- which rings up $7,450 of the vehicle’s $169,900 sticker -- it looks expensive yet more nouveau riche than anything I’ve seen Land Rover build. That’s a good thing. Land Rover's color and materials team knew what it was doing.-- a little bling is necessary for Land Rover to aggressively compete with the Mercedes GLS, BMW X7, Cadillac Escalade and Lincoln Navigator, to say nothing of electric performers like the Hummer SUV and Rivian R1S.

Against this crowded field, Land Rover brings it. The Range Rover comes in long and short wheelbases and can seat as many as seven or as few as four. The basic Range Rover starts at $104,500 for the mild hybrid inline-six model, while the high-powered First Edition and SV variants approach the eye-watering $200,000 level with options. A plug-in hybrid joins the lineup later this year and an all-electric model follows next year.

Based on Jaguar-Land Rover's new MLA-Flex platform, the Range Rover offers a bevy of useful features, including all-wheel steering, JLR's clever Pivi Pro Infotainment and power-assisted doors (coming on 2023 models). The new generation also offers noise canceling technology, a suspension that can self-adjust due to road conditions and six different driving modes that can be calibrated for on- or off-road conditions.

The design changes continue Range Rover’s aesthetic journey from rugged to racy. The 2022 model is flashy -- note the door accents and cutting-edge taillights -- but everything is flush to the body and it’s a modern, minimalist approach. Every line has a purpose. It makes SUVs from Audi and Lexus look terribly busy, and even the fourth-gen Range Rover is fussy in comparison. The grille and front end should look familiar to loyalists, but the boat tail shape in back is less prominent than ever before and the taillights disappear into the piano black settings. It’s a deep contrast to the previous model and its traditional blocky lighting. Still, the Range Rover looks like a dressier version of the last generation and it is a measured evolution. The off-roader has undergone far greater change, most notably the BMW-lead 2001 redesign.

Let’s pause for a moment to dwell on the paint. Various shades of gold and bronze are the Range Rover’s calling card, but the First Edition and SV offer this so-called Sunset Gold Satin finish. In pictures, you can’t tell the difference between this shade and the cheaper paint. In real life, when the sun hits the finish — with coarse aluminum baked in —  the promise of a “bright golden sparkle with high reflectivity” is delivered. Range Rover is the latest company to employ color schemes to burnish its products, a trend recognized by everyone from Kia with its matte EV6 to Maserati and its iridescent Levante Trofeo. Wisely, Land Rover employs this champagne chaser to differentiate the Range Rover, but doesn’t go overboard. My tester had the optional gloss black 23-inch wheels and black roof, which set off the golden hue with tasteful contrast.

The interior was bathed in a light-and-creamy leather dubbed Perlino. It's everywhere. Rest your elbow on top of the door -- leather. The center console -- leather. Even the headliner had stitched leather. It’s broken up with light wood on the door panels and bisecting the dash, with chrome flourishes on the controls. While the lofty price tag gave me pause, the interior’s sophisticated use of materials and clever layout won me over. The Range Rover’s airy setting is reminiscent of Lincoln and Volvo designs, which is a testament to all three brand’s focus on interiors. The First Edition also included rear-sear entertainment screens and massaging seats in front (which were just OK — better than Mercedes’ massages but not nearly as good as Jeep’s). I was surprised to find a cooler in the center console, which I used to chill my wallet and keys inadvertently. It’s far better at keeping your beverages cold. 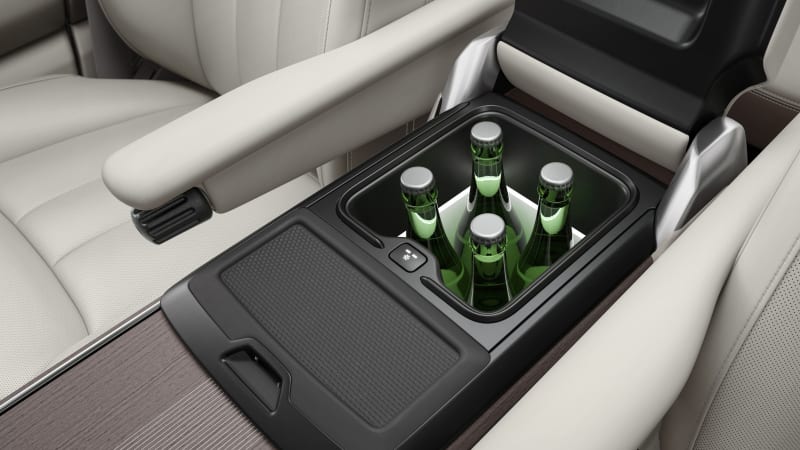 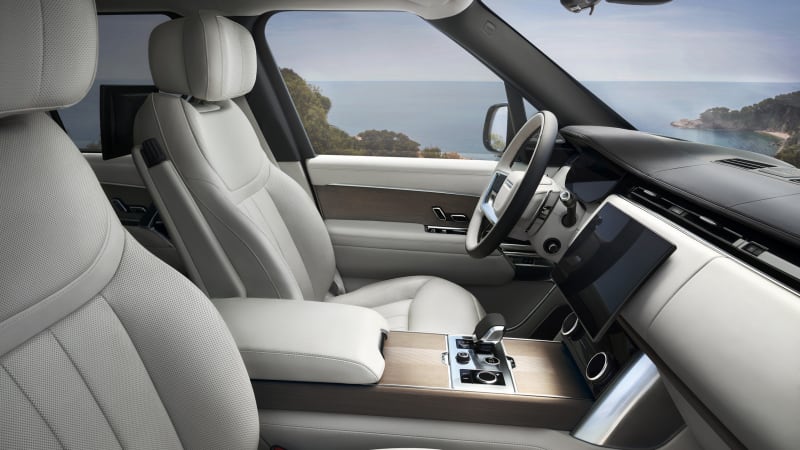 Under the hood is another surprise: BMW’s potent 4.4-liter twin-turbo V8 making 523 hp and 553 lb-ft of torque. It sounds throaty and provides the Range Rover with powerful acceleration and confidence. Working with the eight-speed automatic transmission and all-wheel drive, the Range Rover’s powertrain is more capable than ever and can hit 60 mph in 4.4 seconds. Fuel economy is 16 mpg city, 21 mpg highway and 18 mpg combined, which is about the same as this engine gets in the X7. Quite frankly, I don’t see why BMW is letting Land Rover use it. Even as V8s prepare to exit stage left, this remains one of Bimmer’s better powerplants. Perhaps it’s BMW’s penance for breaking up Rover and selling it to Ford in 2000.

I logged about 165 miles during my stint in the Range Rover and observed about 15 mpg, though there were lengthy stops where the motor ran while I sipped coffee. It’s quiet, comfortable and handles expressways and curvy country roads equally well. The sophisticated suspension technology (with Land Rover’s first five-link rear setup) ably handled Michigan’s cratered pavement, and the steering dynamic was as I expected: light on-center yet satisfyingly familiar with more input dialed in. Supported by all-wheel steering, the Range Rover is a breeze to maneuver and Land Rover claims this has the smallest turning radius of any of its SUVs — despite being the largest.

Testing the First Edition provided a sense of the new Range Rover at its best, with copious power, statement-making gold paint and a decadent interior. Sometimes, that can be a red herring for shaking down cars; the expensive models mask the shortcomings lurking in lower trims. In this case, I suspect that’s not the case. Rather, the First Edition serves as a template for what the Range Rover can be — and needs to be — to keep sales away from Mercedes, Cadillac, BMW and the rest. People in this segment aren’t spending less money these days, inflation be damned, so testing a luxury SUV with all it can offer is fitting. The Range Rover delivers useful decadence and a high level of sophisticated tech, all wrapped in edgy yet familiar styling. With this redesign, the Range Rover is markedly better and remains a status symbol that’s equally at home in West Hollywood and the Scottish Highlands. Not many of its competitors can say that.