It’s only been a couple years since Porsche treated the Macan to a significant refresh, and another refresh is already here. Say hello to the 2022 Porsche Macan, in which Porsche fettles with just about everything, including the styling, interior design/tech and powertrains.

The big change on the outside is the Macan’s new front end. You’ll notice the maw of the GTS is one giant, black mass now, eschewing the body color split front bumper of the pre-refresh model. There are still some horizontal body-colored parts in the lower bumper area, but the front grille and side intakes — now visually joined together into one whole piece — simply dominate the front of the Macan from the hood down. It’s a little jarring in the GTS, but Porsche made it much less so in the Macan S. Instead of all black plastic everywhere, the front bumper is split by a body color piece spanning the width of the front bumper that also reaches upward to separate the side intakes from the grille once more. It’s significantly easier on the eyes at first glance, but we’ll withhold final judgement on both for an in-person look.

Porsche changed up the car’s rear with a larger diffuser. The sides feature a new 3-D textured side blade. Plus, it comes with the Sport Design mirrors standard. A total of seven new wheel designs are being made available, ranging from 19-inch-to-21-inch options. 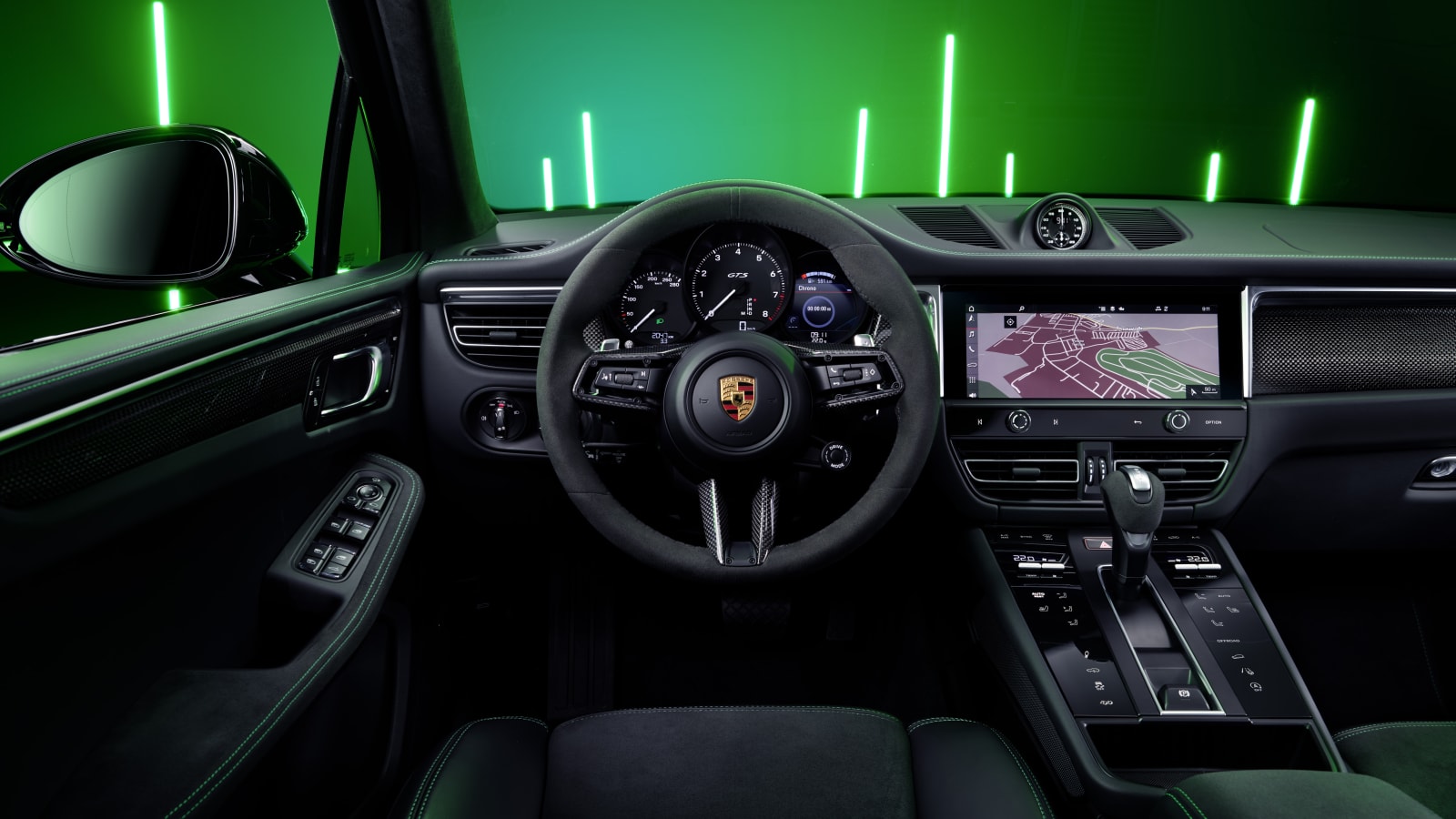 The interior updates are what matter more than anything else, though. Porsche has officially phased out the center stack of physical buttons in favor of the haptic touch center control area seen in many other models such as the Cayenne and Panamera. It makes room for a larger center storage compartment, and Porsche integrated a new gear lever (shorter than before) into the new console. What we don't get is the largely digitized instrument cluster out of those other models, as Porsche sticks with what it's used before. Another significant enhancement, though, is a newly available GT Sport steering wheel taken out of the 911. New interior stitching options include Papaya, Gentian Blue and Chalk.

To our delight, but not surprise, Porsche upped the power output on every single one of its available models. The new base Macan sees output rise to 261 horsepower and 295 pound-feet of torque from its 2.0-liter turbocharged four-cylinder, increases of 13 and 22 respectively. Porsche says the 0-60 mph time is 0.3 second quicker than before, dropping to 5.8 seconds when equipped with the Sport Chrono package.

The Macan S (pictured above) gets a jump up to 375 horsepower and 383 pound-feet of torque by virtue of it being gifted the 2.9-liter twin-turbo V6 engine from the pre-refresh GTS. Its 0-60 mph time drops by 0.5 second to 4.4 seconds; top speed rises to 160 mph, and PASM (Porsche Active Suspension Management) is standard.

With the 2021 GTS engine going downstream, that means Porsche needed to pull from upstream for the 2022 GTS’ engine. It now gets the more extreme version of that 2.9-liter twin-turbo V6 from the pre-refresh Turbo model. Making 434 horsepower and 406 pound-feet of torque, it’s good for a 0-60 mph sprint in just 4.1 seconds and a 169-mph top speed — that’s 2 mph faster than the Turbo could manage. It also gets Porsche’s PSCB brakes as standard and an adaptive air suspension with 10 mm lower ride height. Porsche says the suspension is 15% stiffer than before and features new bump stops and strut mounts. The dampers are also recalibrated to offer a greater range of comfort and stiffness.

If you want an even more extreme Macan GTS, Porsche is making a “GTS Sport Package” available for 2022. It bundles together the Sport Chrono Package, Torque Vectoring Plus, 21-inch GT Design wheels, high-performance tires, 18-way Sport Seats and a number of other appearance extras to make the exterior and interior look a bit more aggressive.

You’re probably wondering where the Turbo model is at this point. We’ve asked Porsche about it, and a spokesperson confirmed there would be no 2022 Turbo model. If there is one down the line (Porsche declined to comment on the potential for a Turbo comeback), Porsche will need to find even more power than before since the GTS stole the old Turbo’s engine.

Pricing is already out for every model of the Macan. We’ve listed the starting prices below. They’re all expected to reach dealerships in the spring of 2022.