2022 Porsche Cayenne Turbo GT is the highest performing Cayenne yet

There's a new top-of-the-mountain model in the Cayenne lineup as of today. Officially called the 2022 Porsche Cayenne Turbo GT, it’s the highest-performing crossover to ever come out of Porsche. However, and this is a big one, Porsche tells us it was not developed by the GT department. That department engineers and develops some of our favorites, like the 911 GT3, GT2 RS and many others. The Cayenne Turbo GT adopts the name, but it hasn't been given the exact same treatment as those other GT models.

That said, we already know it holds the SUV Nürburgring lap record, and today Porsche reveals everything there is to know about the vehicle.

It’s not the most powerful Cayenne of all, but it is the most powerful Cayenne that doesn’t have help from an electric motor. Porsche took the 4.0-liter twin-turbo V8 in the regular Cayenne Turbo Coupe, then made a ton of modifications. Output increases to 631 horsepower and 626 pound-feet of torque, up 90 and 59 respectively. That’s still less than the Lamborghini Urus version of this V8 that makes 650 horsepower and 627 pound-feet of torque, but the Porsche is quicker. The Cayenne Turbo GT has a claimed 0-60 mph time of only 3.1 seconds, easily besting the Urus’ 0-62 mph time of 3.6 seconds. That makes it quicker than the 911 GT3 (with the PDK) to the mark by one tenth of a second, too. No matter the comparisons, a crossover like the Cayenne closing in on the three-second mark is eye-opening stuff. The quarter mile passes in just 11.6 seconds, and Porsche says its top speed is raised to 186 mph.

The engine went through numerous changes versus the standard Cayenne Turbo to get it to this mark. Porsche says it uses a new crankshaft, pistons, connecting rods, timing chain and torsional dampers. The exhaust is made of titanium and features a center-exit. Porsche says it’s significantly louder and weighs 40 pounds less than the Cayenne’s regular exhaust. Due to that center-exit design, this Cayenne loses any towing capability, so look elsewhere if you want to take advantage of the Cayenne's stout 7,716-pound towing capacity. 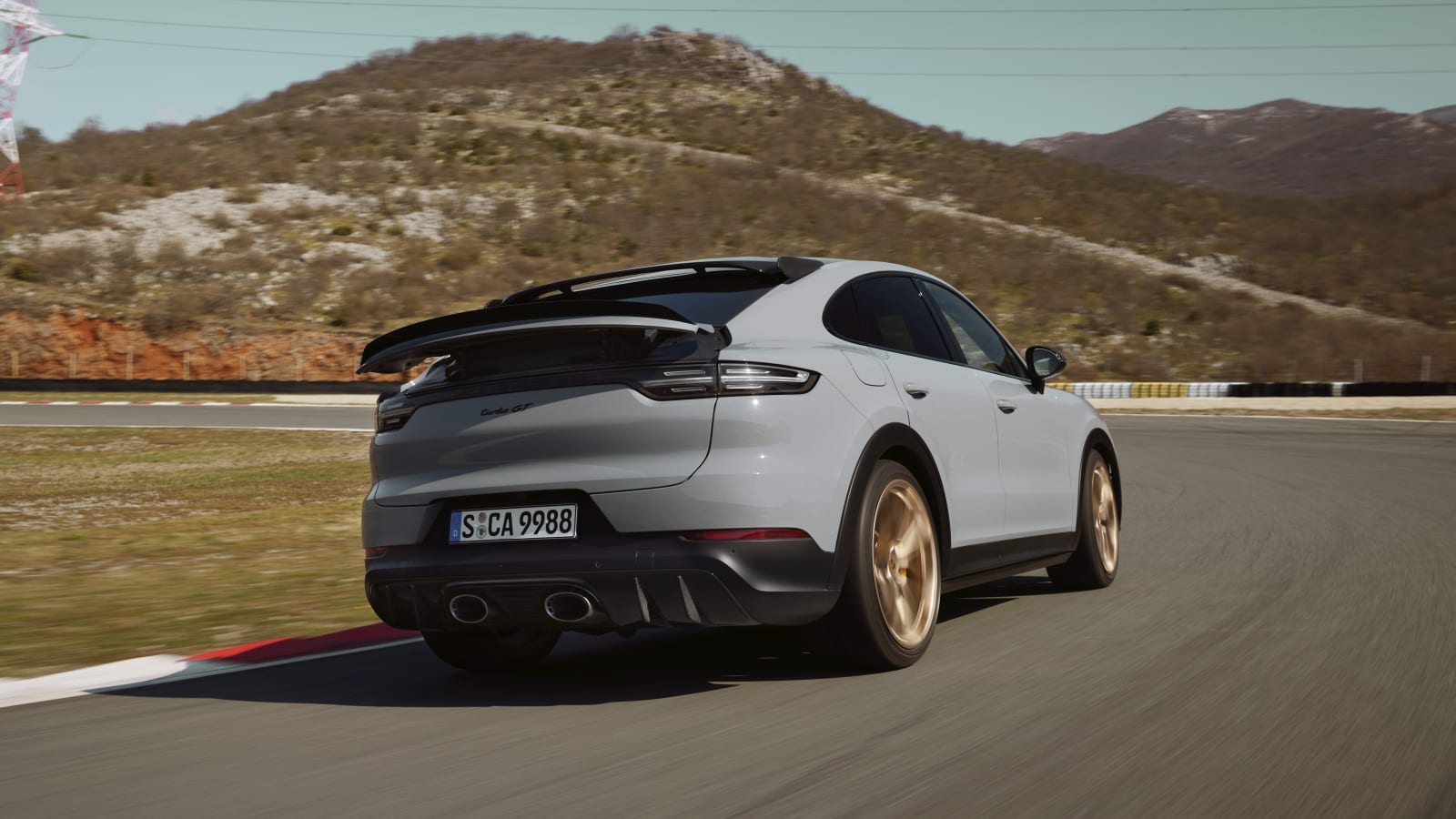 If you were thinking that putting the GT badge on the Cayenne might bring back the Cayenne’s manual transmission, we’re sorry to disappoint. The Cayenne’s eight-speed automatic transmission is back in business, but Porsche says it’s been modified to provide quicker shifts. Like every other Cayenne, this one is all-wheel drive. The drivetrain’s thermal capacity has been increased, too, with the addition of a water-cooled transfer case.

Porsche heavily modified the suspension beyond what the standard Turbo Coupe offers. Off the top, Porsche lowered the ride height by 0.67 inch. The air suspension stays, but it’s 15% stiffer. All of the electronically controlled chassis systems are re-calibrated, and the dampers are re-tuned, as well. Porsche’s electromechanical anti-roll bars are enhanced to allow for even less body roll. The torque vectoring system is improved to sharpen turn-in response. Larger wheels, by one inch, are fitted up front, and negative camber is increased by 0.45 degrees. These larger wheels are wrapped in the most aggressive rubber possible: Pirelli P Zero Corsa high performance summer tires. You can likely tip a cap to these as one of the reasons for the Cayenne Turbo GT's Nürburgring lap time.

Helping this Cayenne to a stop are gigantic ceramic composite brakes (standard) with rotors that measure 17.3 inches in front and 16.1 inches in rear. The fronts are identical to the Urus, but the rear brakes are actually slightly larger than what Lamborghini fits. Porsche doesn’t make any numerical downforce claims, but the aero is decidedly more aggressive than the standard Turbo. The GT-specific front fascia has a larger front lip and bigger side air intakes. Its upper rear wing has new carbon fiber side plates, and there’s a weird adaptive spoiler with a two-inch gurney flap. That’s twice the size of the standard Turbo’s adaptive spoiler. Its rear diffuser is made of carbon fiber to look even racier, too. 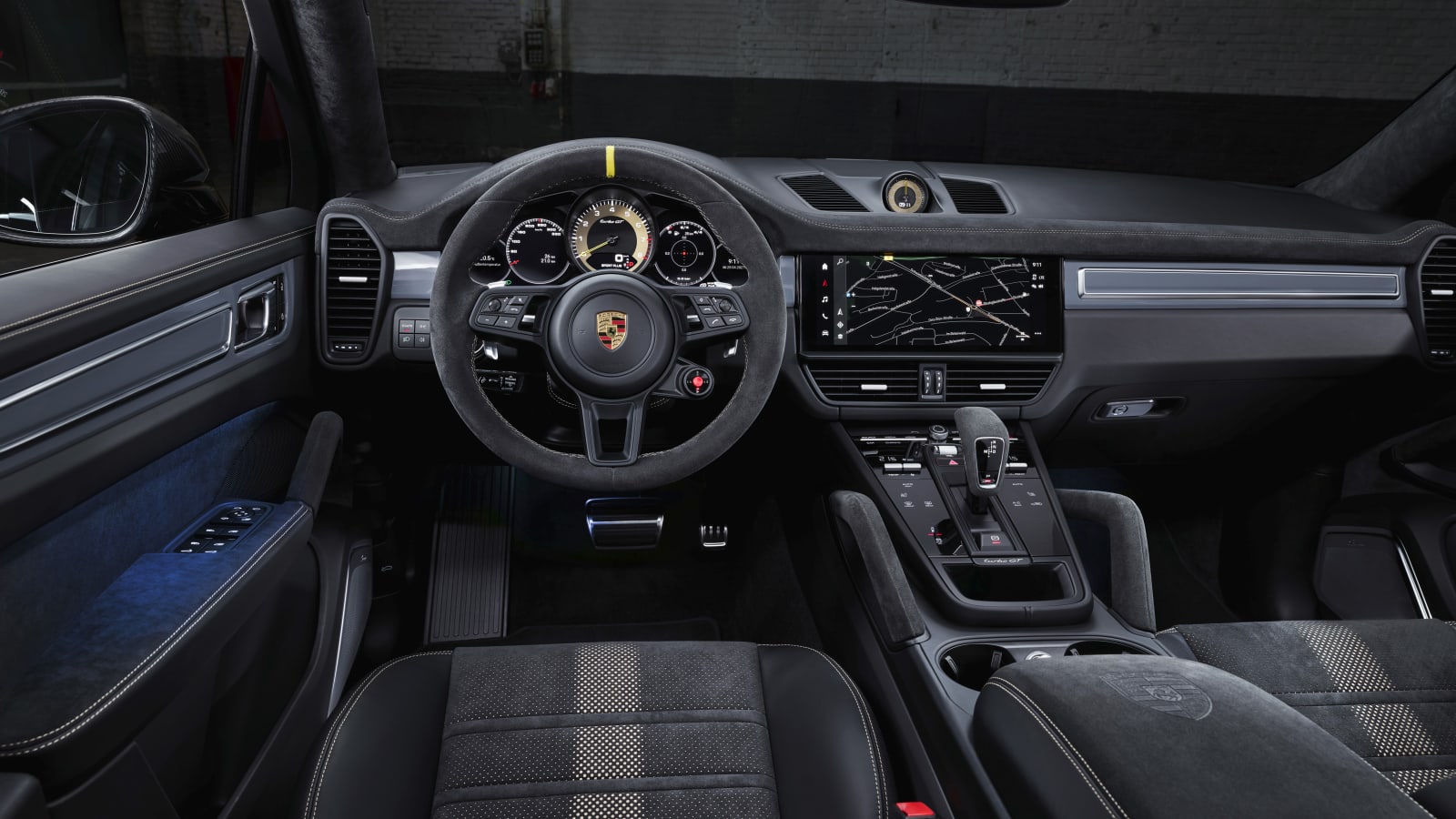 Other appearance changes you’ll notice with the GT include a standard carbon fiber roof, black fender arches and the sweet 22-inch Neodyme (or gold) painted wheels you see on the reveal car. It’s also available in this epic Arctic Grey paint that pairs so nicely with the gold wheels. We’ll also point out that Porsche will not be offering the Turbo GT in the standard body style. It’s coupe roofline only for now. The interior features eight-way heavily-bolstered sport seats as standard. Plus, Porsche decided to eliminate the central rear seat for a “sport rear seat arrangement.” Instead of a center seat, Porsche provides you with a small storage bin and extra-large bolsters on the two seats flanking it — there will be no option to get that fifth seat back, Porsche tells us. All of the seats are covered in Alcantara with contrast stitching in either Neodyme or Arctic Grey. “Turbo GT” can be found stitched into the headrests, and the sport steering wheel has a yellow 12-o’clock marker that matches the standard yellow brake calipers.

If you want Porsche’s wildest crossover, it’s not going to be cheap. Pricing starts at $182,150, including the destination charge. For some perspective, the current Cayenne top mark is the Turbo S E-Hybrid that starts at $169,150. It’s cheap compared to the Urus that starts at $200,000, and the last Urus we drove had a final sticker at $270,000. Dealers are expected to begin seeing them arrive in early 2022.