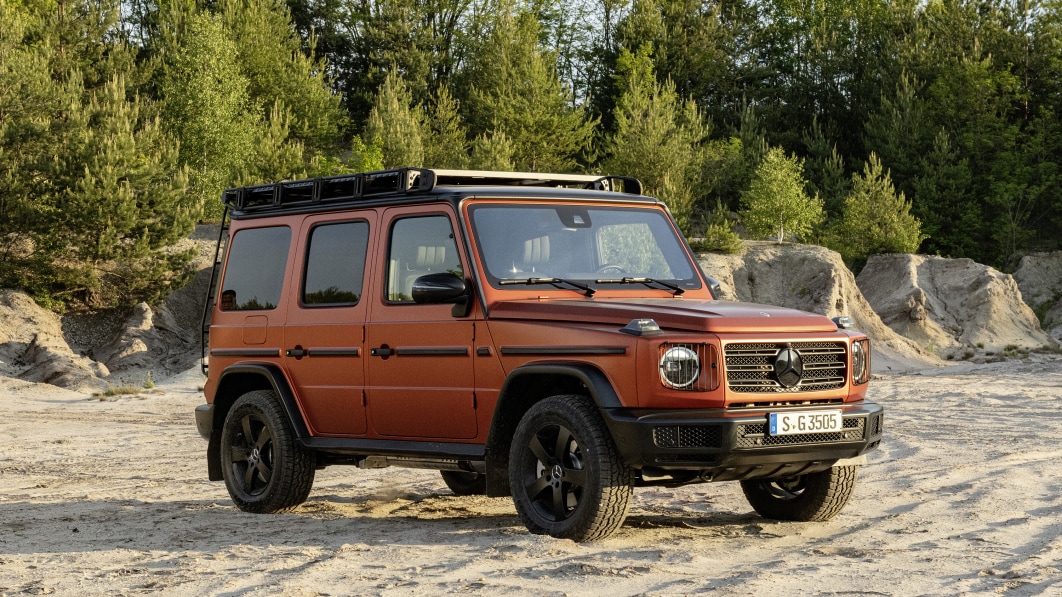 The Mercedes-Benz G-Class has gone in all kinds of directions since its introduction as a civilian vehicle in 1979. It opened another new current with the EQG battery-electric model that debuted at IAA Mobility in Munich, and returned to one of its already worn paths with the G-Class Professional Line elsewhere on the show floor. Mercedes says this is about bestowing an "even more off-road look," done here on a G 350 D with a smattering of extra pieces: mesh headlight protectors, a quartet of mud flaps, and 18-inch five-spoke wheels on Falken Wildpeak All-Terrain 3/W tires.

This is a new take on Professional for the G; the last-gen model added a specialist Pro trim for international markets, but that was a de-contented G for rough trades like forestry and bush firemen, and came in a chassis-cab configuration. The new Pro Line is for more genteel trades, and it won't be coming to the U.S., either — a shame, since a Pro Line could encourage the standard G-Class to go further afield here than gravel driveways in Newport, Rhode Island. Our AMG models offer an AMG Trail Package that softens the suspension, and installs mud flaps and some underbody protection.

We have a better chance of seeing the two additional exterior lines announced at the show, Exclusive Line Exterior and AMG Line. We don't have information on those packages nor any prices yet.

The automaker has also added new equipment and upgraded features and options for overseas markets. The options list will include 64-color ambient lighting, up from eight colors; tinted rear side glass and backlight; standard pre-wiring for rear-seat entertainment and a tow hitch; and three themed interiors, Standard, Exclusive, and Superior.