PALO ALTO, Calif. – Every electric car is quiet. That's what happens when you remove a metal box of tiny explosions from the car. The new 2022 Mercedes-Benz EQS, however, is quiet. As in, carrying on a conversation at a hushed whisper while doing 65 miles per hour on choppy pavement through San Francisco. Road noise? Nope. Wind noise? Not really. Cars and trucks pushing air at you from the opposite direction? Just a mild fwaa, like someone exhaling from across the room.

This is largely the result of improved seals, acoustic foams and glass, and other noise-quelling methods Mercedes has perfected over the course of decades. That's not all that different from the new S-Class, however. Beyond all that, the EQS not only has one or two electric motors instead of an internal combustion engine, Mercedes engineered the motor components to reduce vibration and therefore noise … and then wrapped the motors in a special foam mat … and then decoupled them from the body. As a result, the whine inherent to electric motors is virtually undetectable in the rear-wheel-drive EQS 450+, and only vaguely perceptible when the front motor is added in the all-wheel-drive EQS 580. As in other EVs, you can select from a menu of artificial "sound scapes" to be pumped in while accelerating, but the silence is so stunning that it becomes part of the character.

The endeavor to eliminate noise extends to the design as well. The car's cab-forward, teardrop shape slices through the air with a drag coefficient of 0.20 Cd. That figure makes it the most aerodynamic production car, contributing to the quiet interior and, obviously, to its efficiency and range of 350 miles for the EQS 450+ and 340 miles of the EQS 580 4Matic. 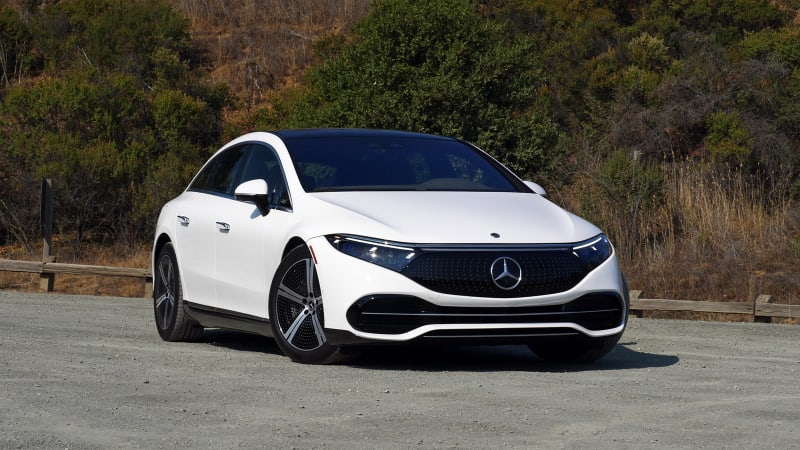 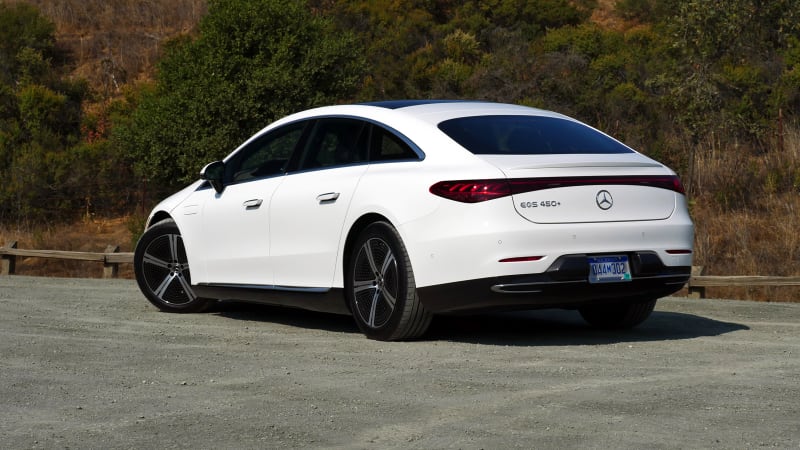 The design achieves another important goal: There's no mistaking it for other Mercedes. Such differentiation, within a brand and when compared to conventionally powered vehicles, has been a common element of all popular eco-oriented cars, from the Toyota Prius to the Tesla Model S. It's indeed a strikingly different car to behold, if vaguely reminiscent of those from the 1990s that embraced cab-forward design and rounded silhouettes. In pictures, and without the benefit of scale, one could probably make comparisons to a front-wheel-drive compact sedan. Not so in person.

It is indeed a vast car, with a total length of 207.3 inches and a wheelbase of 126.4 inches falling just shy of a Mercedes-Benz S-Class. It's also a hatchback, with a trunk reminiscent of an Audi A7's. And it weighs at least 5,600 pounds, which is about 900 pounds more than an S 580. Much of that weight comes from the battery, which is sandwiched below the cabin and flat underbody, resulting in the low center of gravity one expects from an EV. And here's where the EQS becomes a real mind bender once you get under way.

Its standard air suspension with adaptive dampers provides a wafting, pillow-soft ride that beautifully isolates you from impacts, especially with the smaller 20-inch wheels. Combined with the silent cabin and one-pedal driving, it's a stately means of traveling around the city. Once venturing beyond the city limits, you would expect that wafting suspension to heave-ho into the first corner of a winding mountain road. Nope. All that battery weight and the adaptive dampers seemingly defy gravity by keeping the car freakishly level. 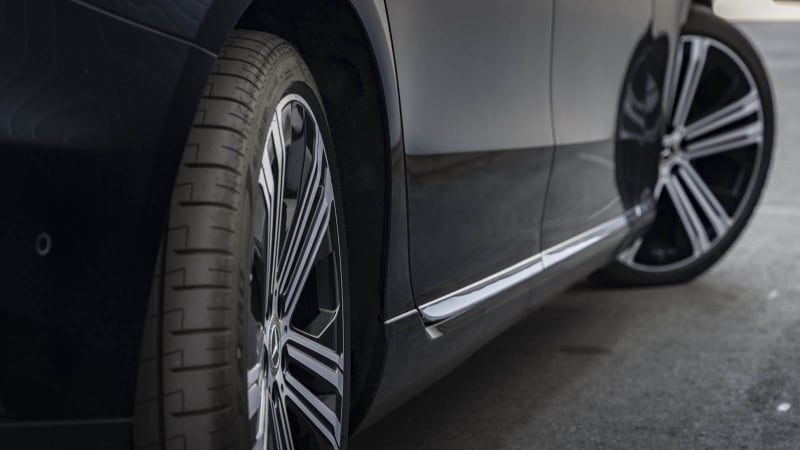 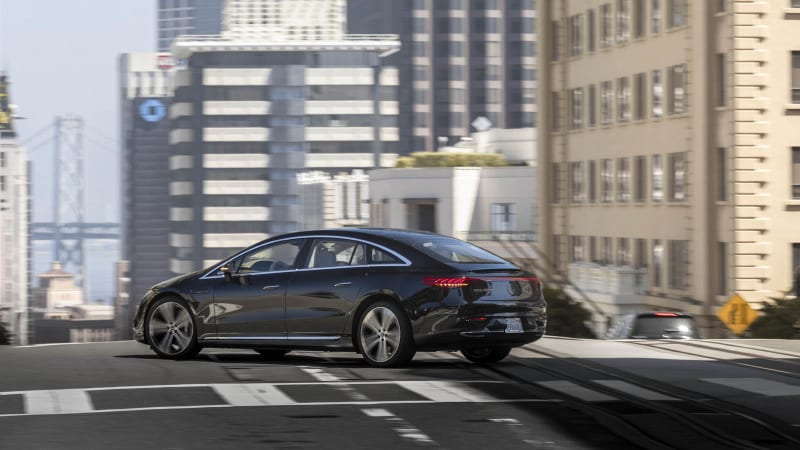 You will also expect that vast length and wheelbase to be cumbersome in tighter corners. Nope. The standard rear-axle steering can pivot by as much as 10 degrees (pictured above), which matches certain versions of the S-Class, but greatly exceeds the 3- or 4-degree norm. As a result, the rear end glides itself around with stunning agility, again reacting to situations far differently than your body expects them too. From the passenger seat, when free from the sensations coming through the steering wheel, you notice all these incongruous dynamics even more. It almost feels like the "Imagineered" cars of certain Disney rides like "Test Track" or "Indiana Jones Adventure" that also have extreme rear-wheel-steering and play tricks on your equilibrium. Almost. It's still pretty subtle and, if anything, a means of marveling at the EQS' technological wizardry.

A more obvious dynamic oddity is the regenerative braking, which allows for one-pedal driving in its strongest setting. That's not the weird bit. In the EQS, the brake pedal literally moves as the system slows the car, not unlike old cruise controls that would pull the throttle away from your foot. Should you need to intervene and add extra braking power, you'll find the pedal to be where it would've been had you been doing the job the entire time. Maybe this makes more sense than how every other one-pedal-capable car has operated? Maybe it's just weird? To be determined.

For the time being, there are two versions that share a common battery pack developed in-house with a usable capacity of 107.8 kilowatt hours. The EQS 450+ has a 245-kilowatt motor powering the rear axle that produces 329 horsepower and 419 pound-feet of torque. With that, you do not get the breathtaking, giggle-inducing acceleration of various high-performance EVs. Heck, in an impromptu drag race with a new E 63 S sedan along San Francisco's Upper Great Highway, we were absolutely smoked, and the 0-60 time of 5.9 seconds certainly speaks to that. It's not a slow car, however. You still get the instantaneous torque and, obviously, silent propulsion expected of an EV. We'd be perfectly happy with it. Next year's addition of an EQS 450+ 4Matic and therefore an additional motor should increase output further, though by how much, we don't yet know.

As such, if breathtaking is a must, the EQS 580 4Matic and its pair of upgraded motors produce 516 hp and 631 lb-ft of torque. It does 0-60 in 4.1 seconds, and absolutely feels like it. You're suitably flattened into your seat, surrounding cars vanish, and your passengers will be amused. Now, that's still slower than a Mustang Mach-E GT, let alone a Model S Plaid or Taycan Turbo S, but if you're measuring a car's capabilities or determining its desirability simply by a 0-60 time, you're missing the forest for the trees. The EQS is a profoundly different car from those. 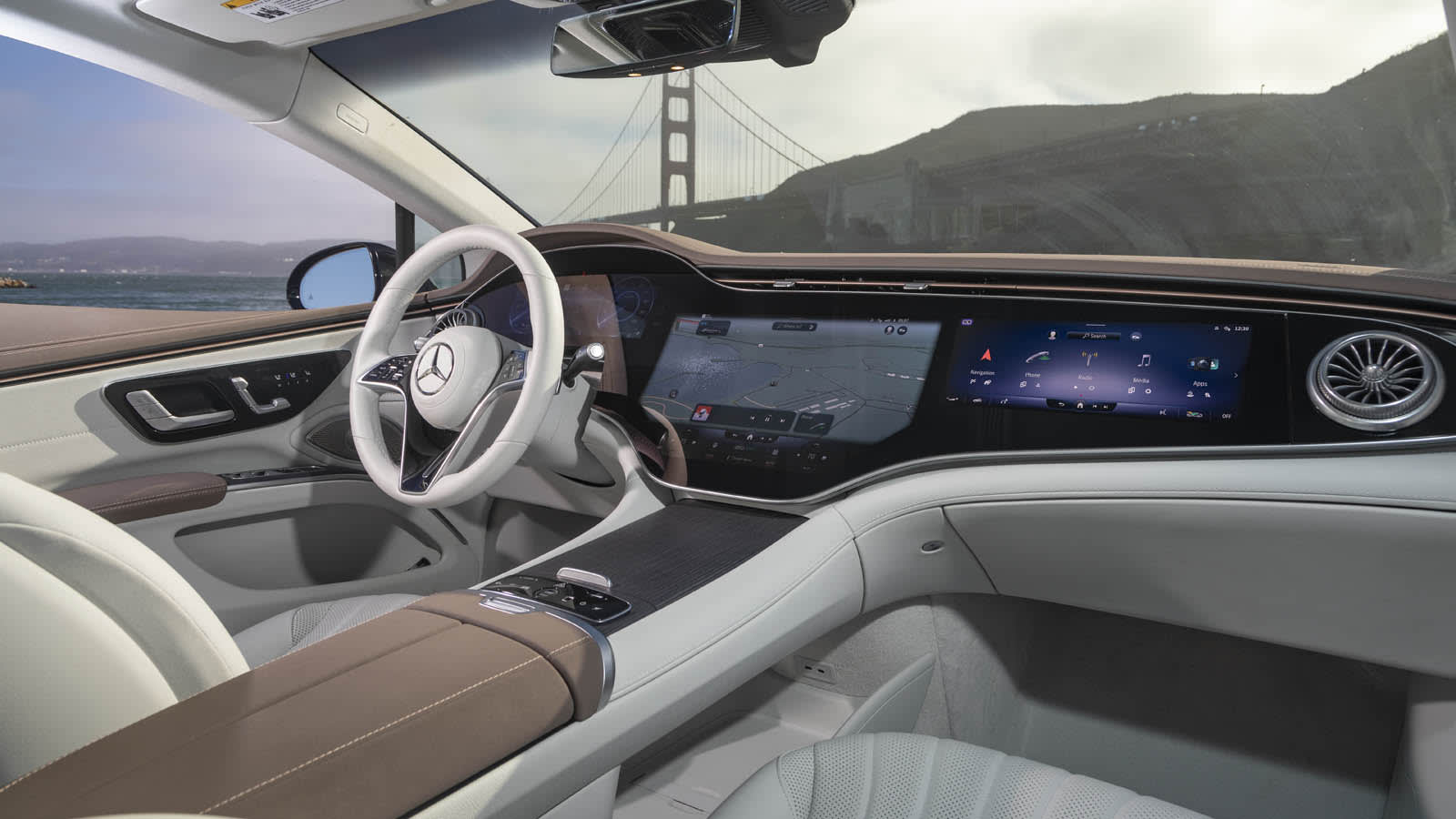 Want proof? Climb inside. The materials and build quality are to an S-Class standard, meaning better than anything on the planet that doesn't wear a Rolls-Royce or Bentley badge. Of course, that's probably not what you'll notice first. Spread out before you, spanning the entire dash from center console to the surprisingly high cowl, is the "Hyperscreen." This contiguous curved piece of scratch-resistant glass covers three screens: a 12.3-inch instrument panel in front of the driver and a 12.3-inch touchscreen in front of the passenger that does virtually everything the central 17.7 central showpiece can do.

Note that the Hyperscreen is a different, optional system than the standard setup shared with the new Mercedes-Benz S-Class. That has one less screen (no passenger) and a central, 12.8-inch, vertically oriented screen that largely expands the functionality of other Mercedes MBUX interface. The Hyperscreen's central display, by contrast, adds what Mercedes dubs the "Zero Layer" concept. This is basically a home screen that showcases the three most frequently used functions: a navigation map with boxes along the bottom devoted to audio and telephone. Artificial intelligence will eventually adapt to you and add additional boxes based on your own tendencies (or you can add them yourself). There's still an icon-filled menu screen akin to other MBUX cars, but despite sounding more complicated (it's still pretty damn complicated), I found this concept far easier to wrap my head around with less menu-flipping involved.

The passenger screen is more or less a redundant MBUX interface, and it can be fun poking around with various vehicle functions without robbing the driver of their screen. Just be warned: Fiddling with it too much while the car takes various turns is a good recipe for barfing on a Hyperscreen. 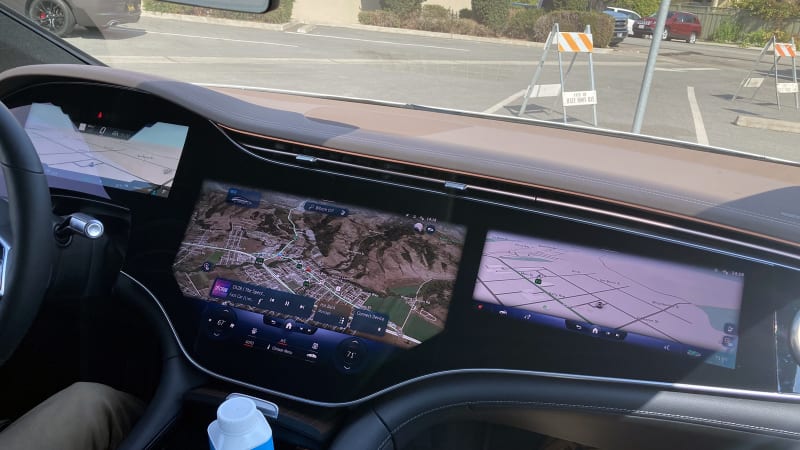 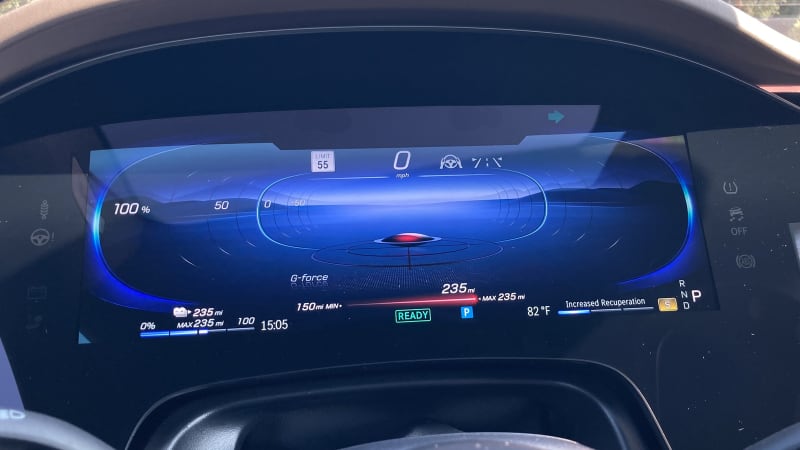 Less successful is the instrument panel. It offers a diverse selection of designs, including two that mimic gauges(ish), one that highlights the driver assistance systems, a navigation screen (you can have three on the dash at once), and probably the strangest and most pointless instrument design I've ever encountered: the "Sport" display. It's technically a G force meter but it looks like a red flying saucer floating about a fjord in a fighter jet's crosshairs. Because sporty? Add to that the curious obsession with ambient lighting schemes and one has to admit that a lot of this stuff is a bit ridiculous.

Now, despite having comparable interior quality as an S-Class (and exterior dimensions), the EQS cabin does not provide comparable interior space. That sleek roofline significantly reduces headroom to the point that even those of average height might feel a bit squished (I'm 6-foot-3 and my head was stuck against the headliner with a speaker looming just above my ear). The seat also feels a touch low, and despite this being a hatchback, the seatback is fixed and a touch upright. The Pinnacle trim level does provide an upgrade to power-adjustable rear seats, which we didn't get a chance to sample, but given the space available, every EQS is still bound to feel more like a CLS than an S-Class.

Truth be told, this is the most complex car I have ever tested. The press kit runs 63 pages and there was even more discovered here in Palo Alto during various expert interviews. This could get awfully tech-y awfully quickly, but as Mercedes CEO Ola Källenius told the assembled group of journalists, "A lot of customers don't want to get bogged down in the details. Customers just want to know that it works." We tend to agree, which is why we've tried to focus on what the EQS is like to drive and/or ride in. EV evangelists will no doubt find plenty to geek out about or hate on, from its battery chemistry (there's 10% less cobalt!) to its energy recuperation power (up to 290 kilowatts!), but for those interested in how the EQS behaves as a car, the simple answer is that it not only works, it's sensational.

The price is also not that outrageous. With a starting point of $103,360 including destination and three years of free charging at Electrify America stations, the EQS 450+ is actually cheaper than the base S 500 at $110,850. True, that has standard all-wheel-drive, stronger acceleration and more space, but it's similarly equipped and engineered. That can't be underlined enough, because "being similar to an S-Class" carries a lot of weight and justifies a lot of dollar signs.