The Toyota Land Cruiser is dead. Long live the Toyota Land Cruiser 2022 Lexus LX 600 — the flagship SUV brought kicking and screaming into the 21st century with a much-needed overhaul. Back with a new powertrain, new shell and new possibilities, the LX is aimed at the top of the luxury SUV segment, taking the fight back to the likes of the Cadillac Escalade and Mercedes-Benz GLS.

The Land Cruiser isn't truly dead, mind you; we just don't get it here in the U.S. — at least not yet. Fortunately, much of that new SUV’s engineering lurks beneath the LX’s skin. The new twin-turbo V6, for example, provides 409 horsepower and 479 pound-feet of torque and serves here as a baseline V8 replacement; it's paired to Toyota's new 10-speed automatic. The hybrid engine offered in the new Toyota Tundra and Sequoia is rumored to be on the way to the LX in the coming model years.

But while the Land Cruiser is traditionally known for its off-road prowess, the LX we tested was most definitely not. In place of a robust 4x4 system with locking front and rear axles intended to conquer unexplored terrain, we got a Torsen limited-slip differential, an F Sport suspension with performance dampers, and massive 22-inch wheels. Sure, the center differential lock and LSD will get you just about anywhere you could possibly need to go, even on dirt, but that's not the F Sport's intended use case.

That’s not to say the LX 600 can’t hang when it comes to typical SUV duties. It’s nearly 17 feet long and equipped with a fold-flat third row, but it's also essentially a foot shorter than a standard Escalade. That partly explains why that third row is basically utility seating as opposed to consistent family transport. It also offers reasonable headroom at the expense of cargo space – just about all of it, in fact. If you really need to use the third row and bring some stuff along, you can always rent a trailer; it’ll tow 8,000 pounds.

Fortunately, the standard full-time 4WD and limited-slip differential don’t need to be paired to the LX’s off-road Crawl Mode to be worthwhile. Though our loaner’s huge 22-inch wheels were wrapped in all-season rubber, the LX handled typical Michigan winter garbage with aplomb. Fresh snowfall was limited during the week we had the truck, but there was plenty of leftover, inches-deep crust and slush in the suburbs north of Detroit where we took the LX out to play. 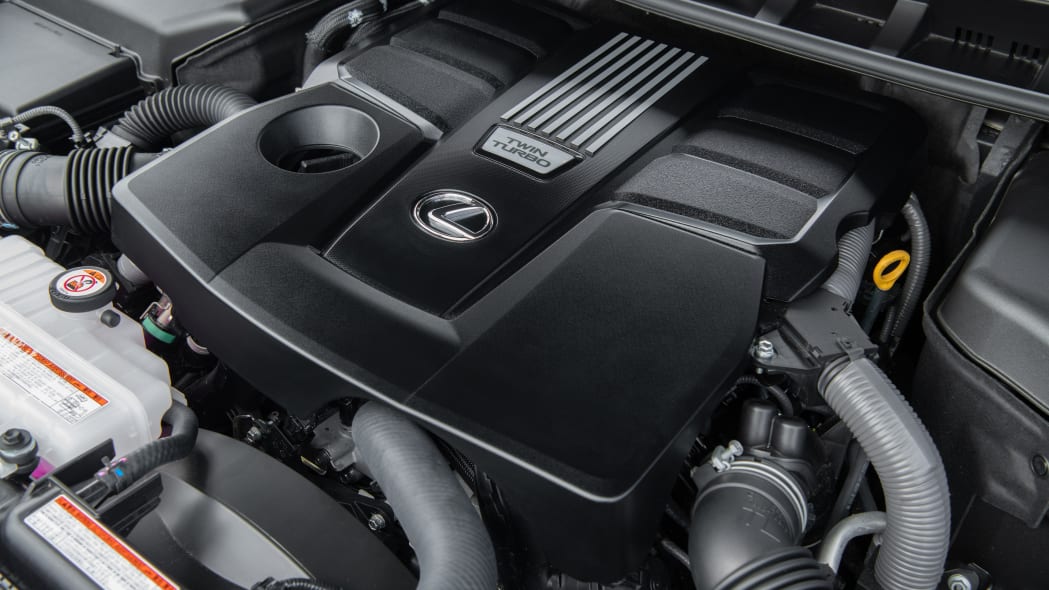 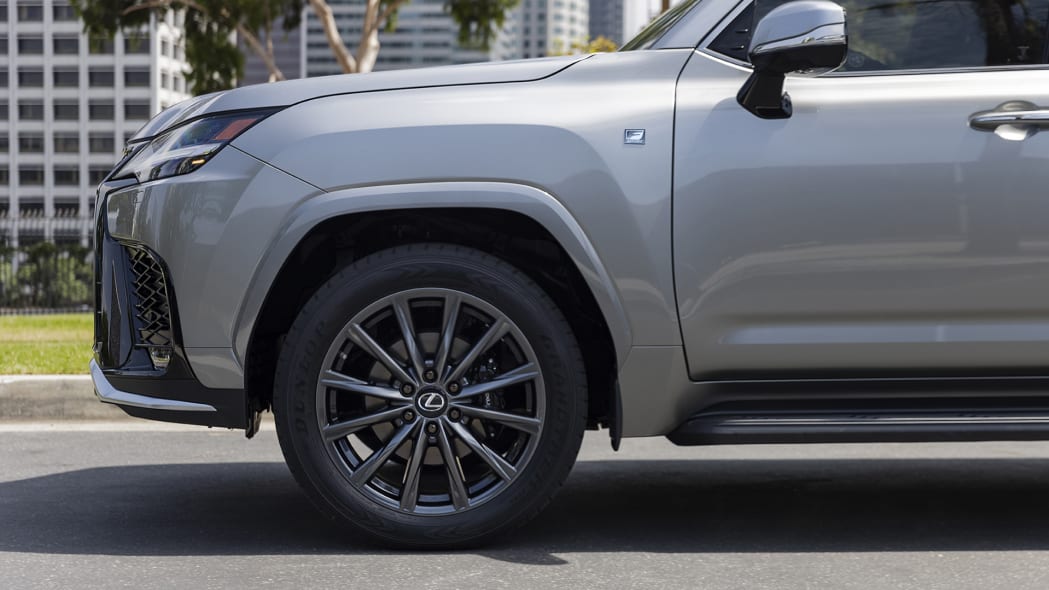 Competent though it may be over the rough stuff, comfortable it is not. This F Sport would be far more at home on flatter, cleaner and perhaps curvier pavement. Though we wouldn’t call it a performance SUV per se, it certainly rides like one. Those 22s can be felt over just about every crack, seam and expansion joint, and while the F Sport suspension is the sportiest Lexus offers, this is still a massive, softly sprung SUV. In a way, that character is at odds with the engine, which feels taut and punchy. The LX accelerates so effortlessly that it feels a bit boring. We suppose that’s kind of the point when it comes to six-figure luxury vehicles, but the downside here is that the rear end squats significantly with any remotely authoritative shove of the throttle and the front dives in equal proportion when you throw out all the anchors.

We’ll note that our F Sport Handling model wasn’t equipped with the optional Active Height Control, which is a hydraulic suspension system (as opposed to air), but its “Low” mode is meant only to make it easier to get in and out of the LX, and can’t be utilized at normal speeds. We’re not convinced its existence is consequential. Regardless, despite accelerating like a smaller car, the LX doesn’t feel like one. On smooth roads with minimal traffic, it’s pure suppleness; mess with that formula too much and things get a bit disjointed.

Fortunately, the LX’s interior mission is a bit more coherent. Our F Sport Handling model represents the middle tier for LX and even it is pretty impressive. It comes with heated and ventilated first- and second-row seats, a power sunroof, variable ambient lighting, a 12.3-inch infotainment system with wireless Android Auto and Apple CarPlay, a HUD and an 8-inch digital instrument cluster display. Our tester also came with the $2,600 Mark Levinson audio system (its only option), and it’s as fantastic here as it is in the brand’s other vehicles.

By and large,  we have good things to say about the infotainment system itself. Toyota, and by extension, Lexus, has finally settled on a collection of hardware and software that looks good and performs admirably. Voice controls are easy to use, though occasionally frustrating as the system doesn’t seem to consistently lower the volume of what you’re listening to when you address the computer. This doesn’t seem to impede the microphone or the infotainment’s ability to comprehend commands, but it’s a lot like trying to talk over the buzz of a crowded nightspot. 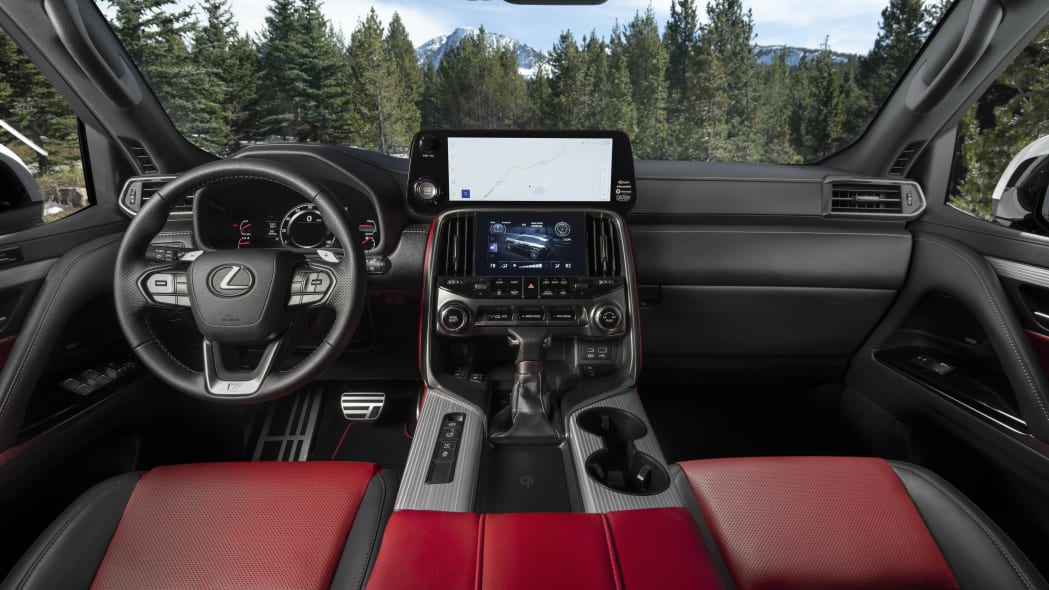 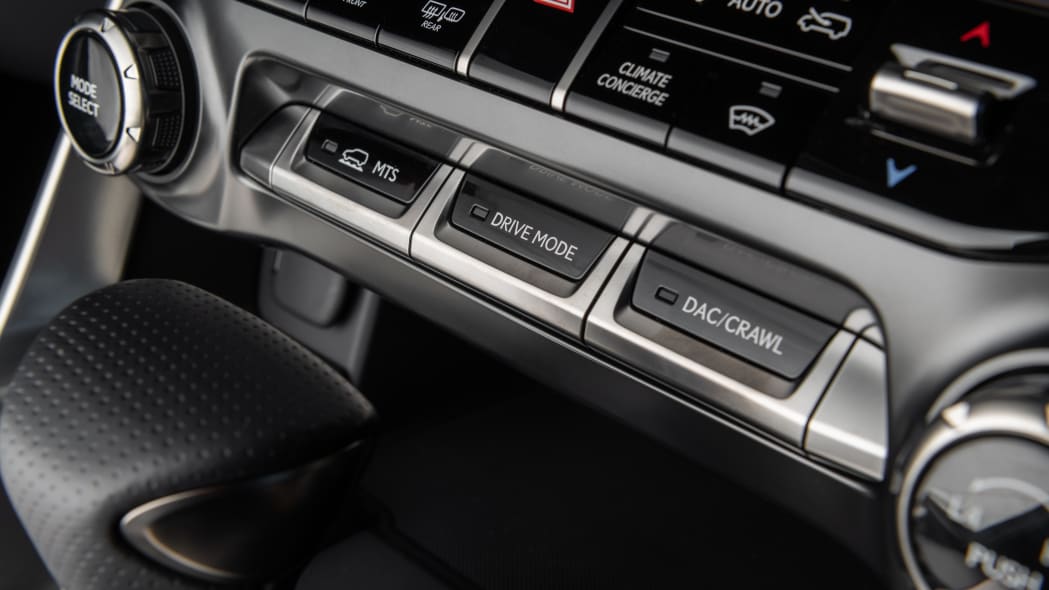 The other nits we’d pick include the absence of a dedicated home screen (in the LX, the default view is the navigation map) and split-screen functionality, which means you’ll have to flip between common functions rather than having them display side-by-side, as in many competitors and old Lexus models. However, the LX uniquely benefits from a second screen below the primary infotainment panel that displays vehicle status information and incorporates some controls for the heating and cooling systems. You won’t find this on the smaller NX, but it’s ultimately a poor substitute for a configurable side-by-side display.

While the F Sport's Circuit Red upholstery may not be to everybody’s liking, it’s just one of a multitude of interior treatments available. Even the F Sport can be had with black leather, and the four other variants offer more distinctive looks. The Ultra Luxury’s open-pore wood looks especially tasty. And unlike the Escalade, whose interior quality trails off the farther rearward you go, the LX’s cabin shows just as well in the back seat. Mid-grade though it may be, our test model rang the till at $105,005, including $1,345 for destination. Pricing runs the gamut from $88,245 for a base model up to more than $127,000 for the Ultra Luxury. And there’s not even an engine upgrade available yet.

The LX is bookended on the low end by the Escalade, Lincoln Navigator and Jeep Grand Wagoneer, and on the high end by the Mercedes-Benz GLS, BMW X7 and Range Rover. The big Americans offer a lot more value for the money, checking in with more cabin space (for passengers and cargo alike), more tech features (including GM's Super Cruise and Ford's Blue Cruise) and arguably more satisfying on-road performance for about $10,000 less, like-for-like. The Europeans — the new Range Rover in particular — are sized more similarly to the LX, but run the other direction when it comes to pricing.

Its value proposition may not move the needle, but the LX’s strength comes from its luxury pretensions. Its Land Cruiser DNA will give it more than enough credibility for the SUV crowd, especially those who are already Toyota/Lexus loyalists. The addition of a hybrid option would make the LX that much more compelling, so we hope Lexus seizes upon that opportunity as soon as possible. As it sits, the F Sport’s performance veneer isn’t unattractive, but the tradeoffs will only be tolerable to those blessed with open, well-manicured roadways. If your going ever gets tough, stick with one of the luxury trims. Your spine will thank you.