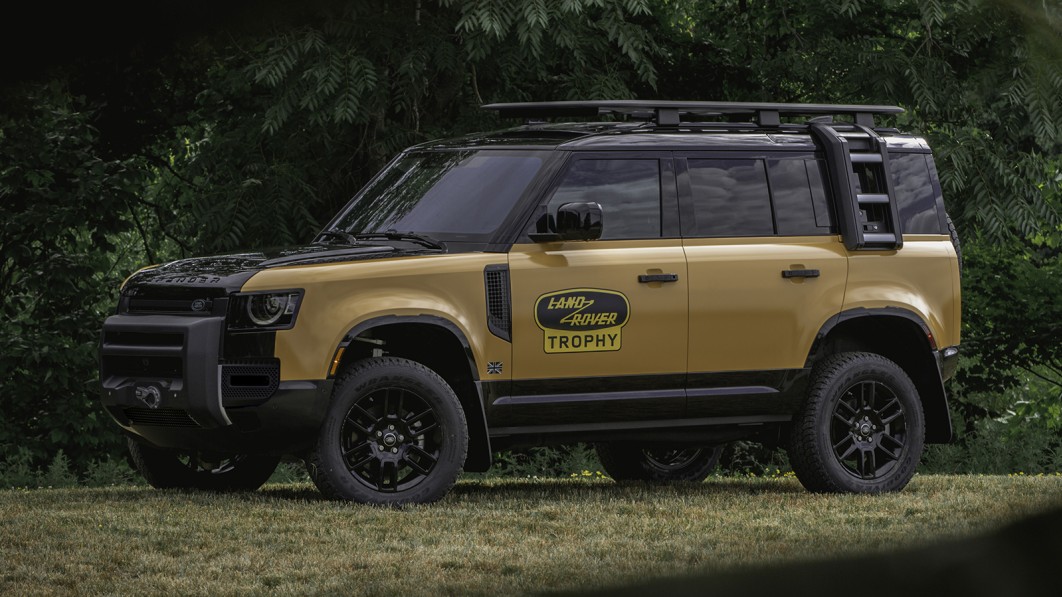 Earlier this year, Land Rover announced it was building a limited run of classic Defenders with big V8s with the color scheme of the Camel Trophy Land Rovers. The Camel Trophy, in case you're not familiar, was an off-road competition that took participants to remote locations and featured yellow-ish Land Rover models. It lasted for decades, and, yes, it was sponsored by the Camel cigarette brand. The U.S. didn't get the classic Defender Trophy Edition for obvious regulatory reasons. To make up for that, the company has created the 2022 Land Rover Defender 110 Trophy Edition, exclusive to North America.

At its core, the Trophy Edition is basically a graphics package with a bunch of optional features included. But it's a highly effective one. The exterior gets the same type of yellow wrap as the classic European model. Naturally, both this and the classic have a vintage-looking Land Rover logo instead of a cigarette brand on the side doors. The visuals are finished off with a black trim package along with a front bumper protector, skid plate, expedition roof platform, ladder and mud flaps. Other accessories included are rubber floor mats, winch installation kit, tow hitch and air compressor.

All of these upgrades are added to a Defender X-Dynamic SE, which comes with the 395-horsepower six-cylinder engine. It also has air suspension and both off-road packages that feature an electronically locking rear differential, off-road tires, terrain management and off-road cruise control. The included cold-weather package adds a heated windshield, washer nozzles, headlight washers and steering wheel.

Finally, the Trophy Edition comes with a two-person entry in the U.S. Trophy Competition. It's in a similar vein as the original Camel Trophy with participants learning how to off-road and then participating in off-road, team and physical challenges. The winner will continue on to a competition in the U.K.

Pricing for the Trophy Edition starts at $91,350. That seems like a lot, but a similarly equipped non-Trophy Edition will run around $85,000. And the standard one doesn't come with the cool color scheme, entry in an off-road competition and the exclusivity. The latter comes courtesy of the fact Land Rover is only selling 220 of these models in the U.S. If you're interested, it goes on sale in August.