NAPA, California — Standing out in a field that includes the Audi Q7, Volvo XC90 and Acura MDX is no easy task. The trio nails driving dynamics, modern style and tech to a tee, putting all the more pressure on Infiniti’s long-awaited revamp of its top-selling QX60. As a sophomore effort to an SUV that lasted well past its best-by date, the 2022 Infiniti QX60 undergoes a substantial overhaul to bring it up to snuff. Does it succeed? We scored seat time in all three rows for answers.

Most visibly in this image-conscious segment, the QX60’s fully redesigned exterior is a less fussy, more serene look than the previous one, which debuted back in 2013 as the JX35. Gone are the deeply contoured body panels, whose pinched sheetmetal and curved character lines evoked a certain (and increasingly dated) moment in Infiniti’s design language history. The new QX60 flattens many of those creases, bringing a smoother, more monolithic vibe to the table. According to Infiniti senior design director Taisuke Nakamura, the update embraces the concept of “Ma,” which describes a form of Japanese minimalism. We’re not sure if Nakamura’s “kimono fold” headlights or “origami-inspired” dashboard are readily identifiable as such, but the redesign is nevertheless a handsome one. The 2022 QX60’s redux actually gives it a stylistic leg up on some competitors.

The QX60 cabin has also been reworked to become a more livable space, starting with a de-cluttered dashboard that incorporates a fully digital instrument panel, an available 10.8-inch head-up display, and a standard 12.3-inch multimedia screen that replaces an 8-inch unit (the last QX60 never got Infiniti's bizarre double-screen tech interface). Standard tech includes wireless Apple CarPlay and Android Auto, six USB ports, a revamped Infiniti Intouch app that adds greater functionality, and the industry’s first integration of remote starting via Alexa voice command. Up front, the interior comes across as sleeker and modernized, with a low-profile expanse of HVAC vents forming a sweep of horizontal lines across the dashboard. Though attractive, their functionality is somewhat hampered by the need to reach into the narrow slots in order to redirect the airflow up or down. 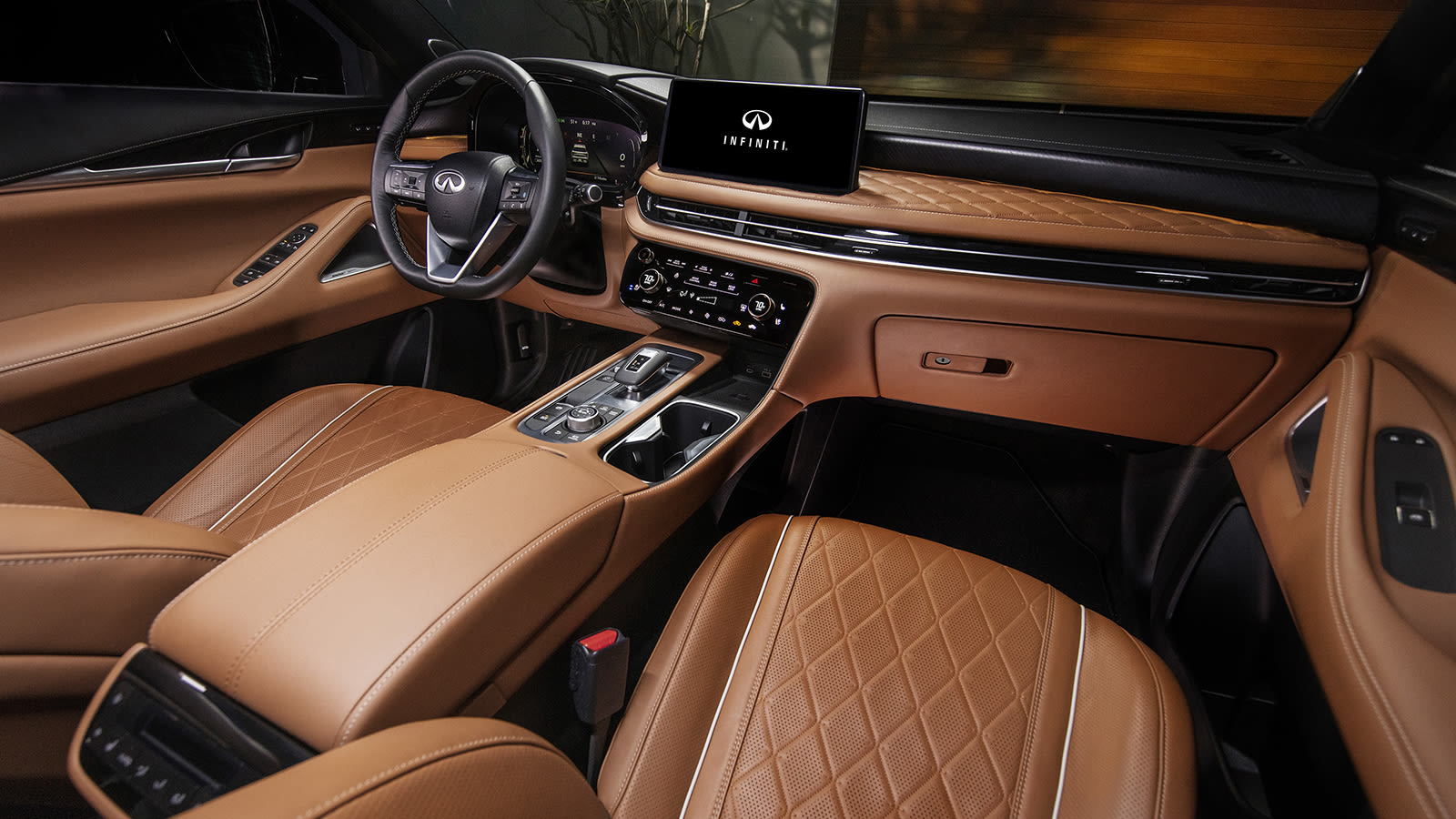 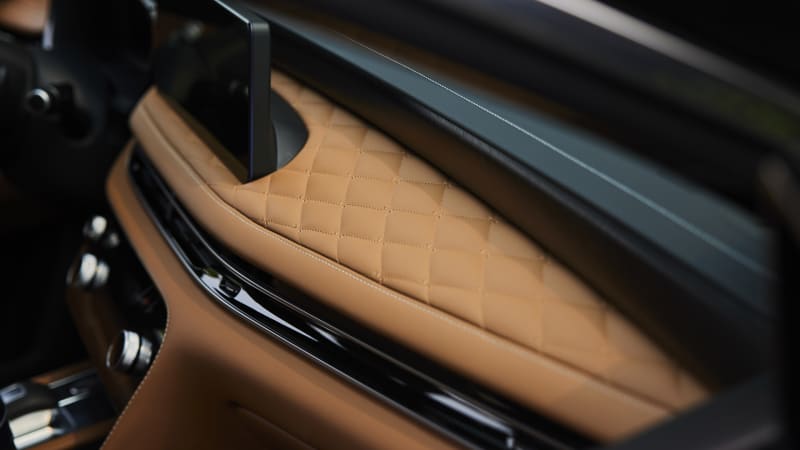 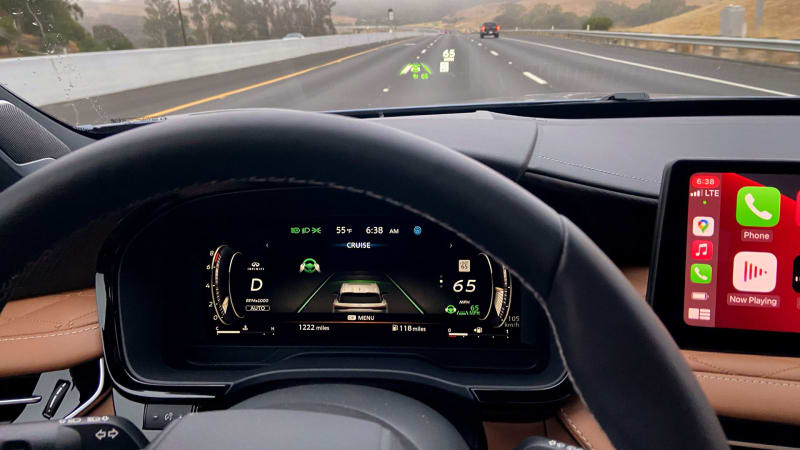 Some of the cabin's luxury touches are a bit heavy handed, like the Autograph trim level's diamond quilting on the dash whose stitches seem thick and indelicately executed. However, there are also welcome upgrades that bring the interior into the modern era. The configurable instrument panel is clear and easy to see (above right), and the head-up display works well too. The new electrically actuated gearshift lever frees up front seating space without feeling contrived or needlessly complex, and a combination of physical dials and haptic buttons for the climate controls offer a straightforward alternative to menu-driven HVAC controls. Open pore ash wood accents on the top two trim levels offer a grounding, high-end effect to the generous soft-touch surfaces.

Infiniti’s so-called "Zero Gravity" front seats are all-day comfortable, with massage functionality on Sensory and Autograph trim levels that runs a full 30 minutes before timing out. It’s not the deepest of shiatsu backrubs, but the option is a welcome addition nonetheless.

The second- and third-row seats have been revised by lowering the occupants’ hip-to-heel area, which relaxes the hip flexors into a more natural seating position. The second-row seats also tilt forward using an electrically actuated, spring-loaded release mechanism, but continue to tilt forward as a whole, enabling car seats to remain strapped in while passengers climb into the three-seat back row. The Autobiography trim level adds a nifty removable second-row console with two cupholders that can be stowed in the trunk. In terms of space, while the theatre-style second-row section felt spacious enough for my 5-foot-11 frame, the third row is better suited to those of smaller stature. 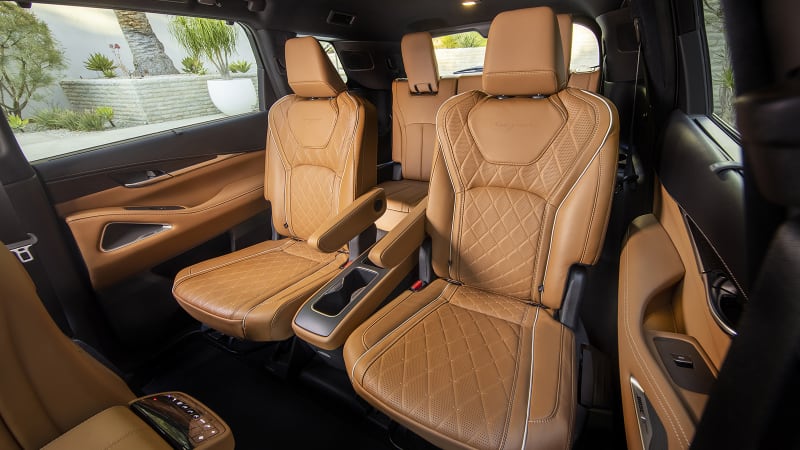 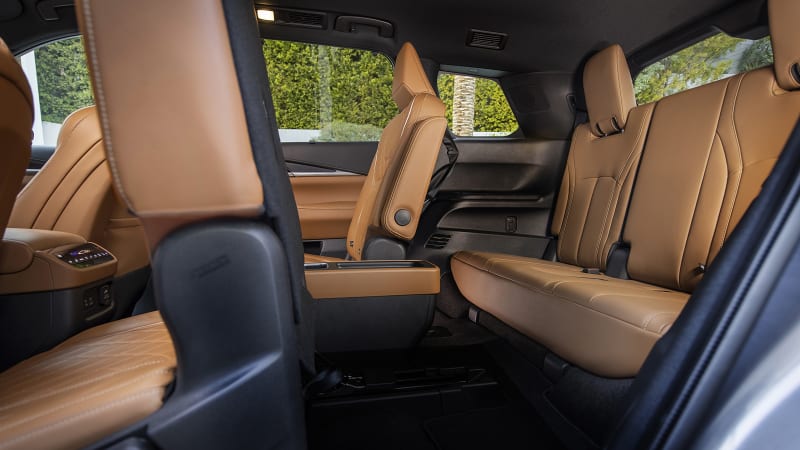 The QX60 feels solid and well insulated as you roll into traffic – or in our case, the mild stop-and-go of the lightly trafficked small towns dotting California’s Sonoma and Napa counties. Despite the considerable mods to the crossover’s interior and exterior hardware, the QX60 retains the naturally aspirated 3.5-liter V6, which produces 295 hp and 270 lb-ft of torque. As it is in the platform-sharing Nissan Pathfinder, this VQ35DD powerplant now mates to a nine-speed automatic, replacing the previous model’s unfortunate and uncompetitive CVT. Though the engine isn’t the liveliest in its segment, the new transmission goes a long way towards making it feel more flexible and capable under most driving circumstances.

All-wheel-drive models are aided by a quicker-reacting system that can distribute up to 50% of torque to the rear wheels. Punch the throttle, and the QX60 scoots ahead urgently enough with smooth shifts delivered by the nine-speed. Tall top gears offer relaxed highway speeds, with 75 mph resulting in a chill 1,800 rpm.

A 60% increase in sound absorption materials and thicker glass make the QX60’s cabin feel cocooned against the outside world, while a standard panoramic roof with a power sunshade keeps it from feeling too enclosed. The adaptive cruise control available on the top two trim levels works well enough, but the lane-centering steering assist doesn’t work aggressively enough to be worth using; best to rely on your own judgment when steering the QX60 through highway bends.

Suspension updates include double-piston dampers and increased roll stiffness, but the QX60 continues to show a bias towards long-haul comfort instead of driver-pleasing dynamics. It's smooth, easy to drive and refined, offering good isolation from bumps and rough surfaces. It's certainly not a handling leader in the segment, though. In particular, while the steering’s variable ratio setup claims lighter effort at low speeds and less correction needed on the highway, its vague feedback doesn’t offer much in the way of feel.

The 2022 QX60 starts at $46,850, a $2,500 climb over the 2020 model (which skipped the 2021 model year), and escalates with Luxe ($52,900), Sensory ($56,350), and Autograph ($60,350) trim levels. All-wheel drive is a $2,000 addition to all trim levels but the Autograph, where it's curiously $2,900 (Infiniti has not published the destination charge for the QX60, but it's $1,025 for the QX55). While this pricing pushes the QX60 into a more elevated part of the market, Infiniti’s final product is well-equipped and more competitive than it’s ever been. As the brand ponders axing less popular models like the Q60 coupe, the bread-and-butter QX60 shows that Infiniti is capable of putting up a strong fight in its fiercest-selling segments with a far more compelling contender than before.