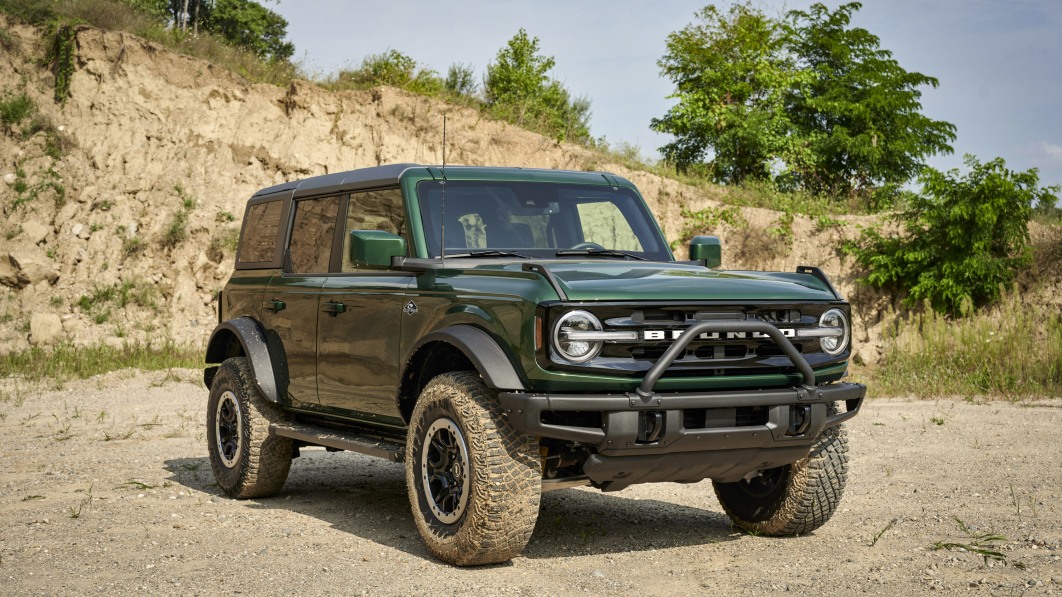 A pair of Ice White Mustangs aren't the only treats Ford took to the Woodward Dream Cruise. The Detroit car-palooza is celebrating the original Ford Bronco this year, so Ford took a 2022-model-year Bronco to the show in one of next year's new colors: Eruption Green Metallic. Earlier this month, we wrote about a rumored leak of next year's Bronco color palette, but the leak only mentioned eight colors out of a current 11, all eight available now. Ford had already admitted that the Bronco will get new colors next year, and the Bronco Nation forum said one of them would be green. The automaker feinted with a light-green-striped Bronco Fire Rig concept this year, created with outdoor clothing making Filson. Eruption Green Metallic is the real deal — the feral hue we imagined was on the way after the palette leak.

Ford calls the new color an update on Mallard Green, which was available on the original Bronco. This one is "evergreen-inspired, with yellow highlights that really tie it into nature." Another scribe wrote that "the new color features yellow highlights that make it look like a conifer forest at sunrise," a line that sounds like it came straight from the emcee at the debut event at Woodward.

The second color Ford announced for next year's Bronco is Hot Pepper Red Metallic Tinted Clearcoat. The new Ranger used to offer this color but gave it up for Race Red and Rapid Red; now the coming Maverick offers Hot Pepper Red. A member at the Bronco6G forum has apparently dug up an image of a Hot Pepper Red Bronco from Ford's configurator files, but it lacks the vibrance of the hue in living color.

The new green and new red will be available on every Bronco in the range, a treat for the base and Big Bend Bronco buyers who don't have access to the entire palette this year. The new colors join Area 51, Cactus Gray, Carbonized Gray, Cyber Orange, Iconic Silver, Oxford White, Race Red, Shadow Black, and Velocity Blue.

Ford says Antimatter Blue, Rapid Red Metallic Tinted Clearcoat, and Lightning Blue Metallic are going away in 2022, but Lightning Blue was only available on the First Edition, which was sold out long ago. The other two colors will stay on the menu until the end of the current model year.

For all those Bronco buyers who had their 2021MY orders pushed to 2022 and configured their truck with Antimatter Blue or Rapid Red, it's probably time to get on the phone. Or can Ford interest you in an evergreen forest at sunrise?