To understand the 2021 Kia Seltos, you first have to consider its soul, the Kia Soul. Between the fun-and-funky styling and the compact, practical body style with tons of cargo room, the car that has defied traditional segment labels for a decade (and won an Autoblog comparison test) is a great all-around daily driver for folks who don’t want something that's obviously a crossover. There’s just one problem: A lot of people really, really want crossovers.

With this in mind, Kia decided to see if the Soul could be made more like one of them. Now, the simplest way to do that could've just been to introduce an all-wheel-drive Soul derivative, but somewhere along the line, the Korean automaker’s product planners decided that would've been a half measure. They considered the fast-growing small crossover segment too hyper-competitive to simply trot out some half-assed Soul "Cross Country" model. Well, besides the X-Line.

Instead, the 2021 Kia Seltos was born, a completely different vehicle in its own right, yet one that wears its soul on its sleeve by packing subtle hints to that trademark styling and some of its interior options.

If offering all-wheel drive as standard helps cement its identity as a crossover, then the fact its all-wheel drive system comes with a locking center coupling truly seals the deal. 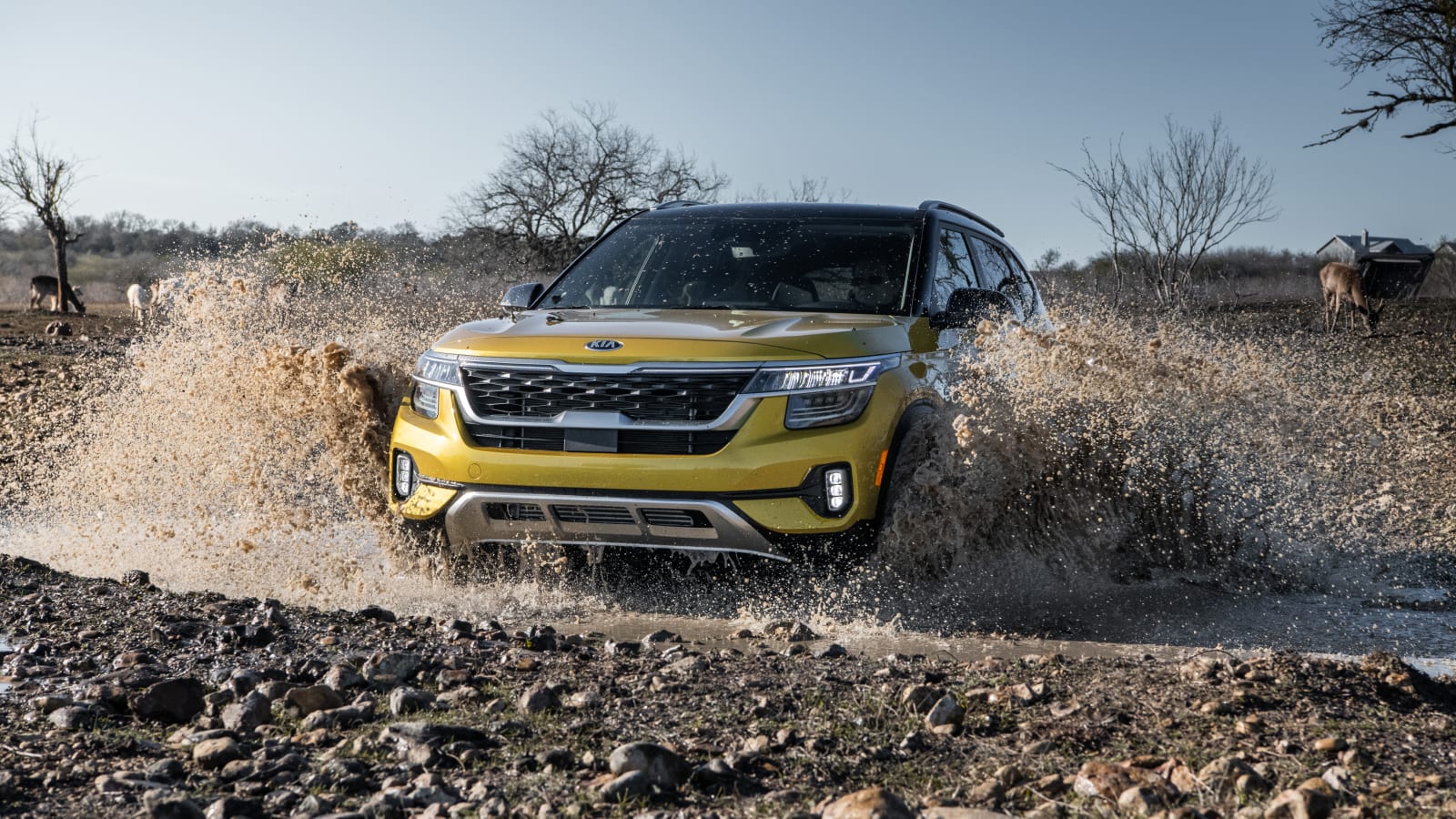 In fact, despite our best efforts, we could find only one glaring omission in its CUV bona fides — towing capability. It has none. Sure, Kia offers a “Lifestyle Hitch” accessory for the Seltos, but that's only good for plugging in something like a hitch-mounted bike rack. Those with jet skis, you're out of luck.

Trying to further pigeonhole the Seltos quickly becomes difficult, as the baby crossover space is so crowded with new entries in search of a niche that it’s almost impossible to strictly define how it is segmented.

You could easily count 20 vehicles of varying size and capability as competitors for the Seltos, from the front-wheel-drive-only Nissan Kicks and Toyota C-HR to the off-road-ready Jeep Renegade. Sister company Hyundai’s Kona and smaller Venue could be considered, too, and then there's the Soul for those who don't need all-wheel drive and obvious crossover image. 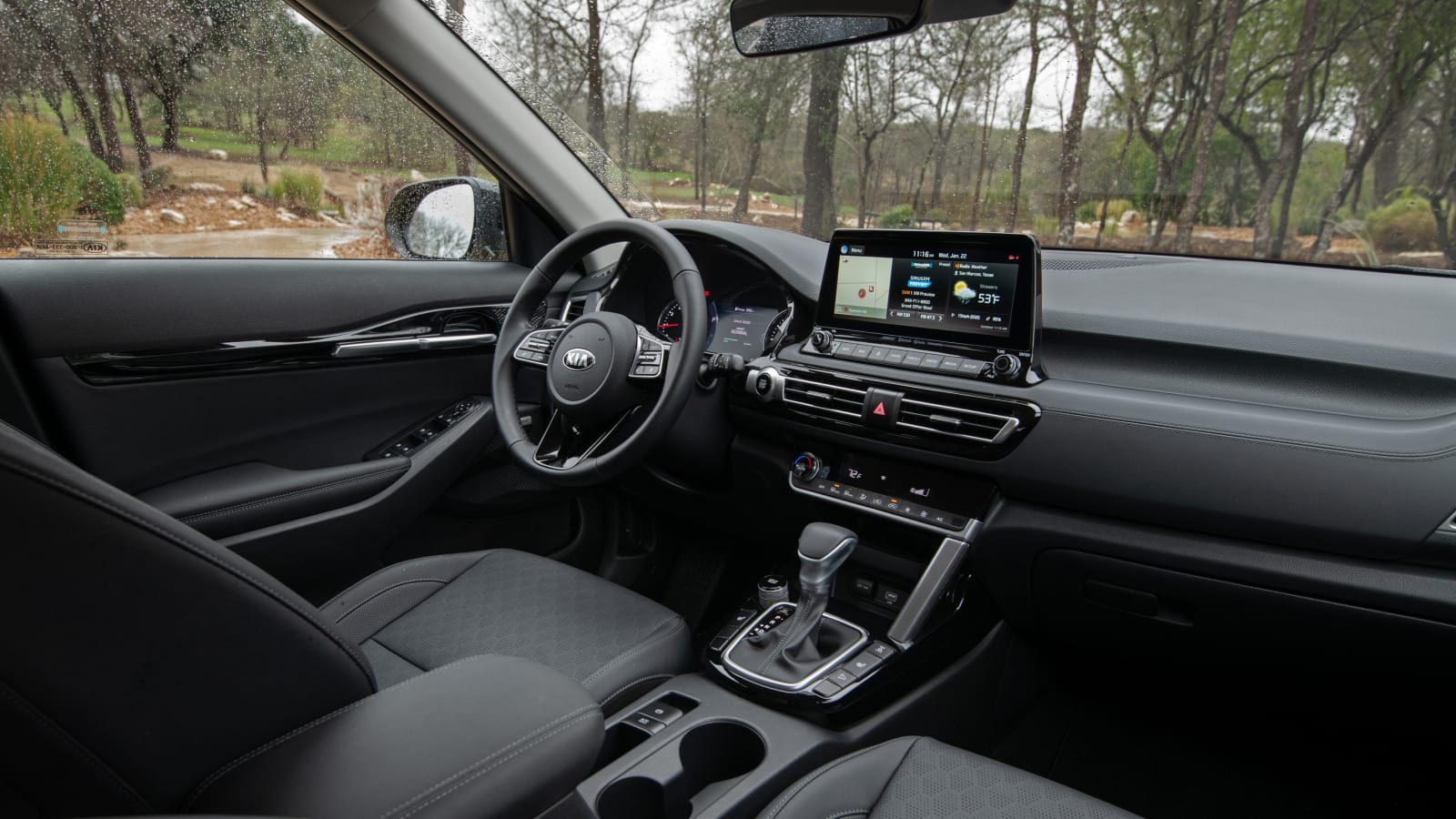 If you’re familiar with Kia’s smaller vehicles (or Hyundai’s), you’ll be unsurprised to learn that the Seltos can be had with both a 2.0-liter naturally aspirated four-cylinder paired to a CVT (Kia calls it “IVT” for “Intelligent Variable Transmission") or a 1.6-liter turbocharged four-cylinder mated to a seven-speed dual-clutch gearbox. All-wheel drive is effectively standard on all but one model, the S, which comes only with the 2.0-liter engine and CVT.

The 2.0-liter engine makes 146 horsepower and 132 pound-feet of torque. As you’d expect from any small crossover, the base-engined Seltos is reasonably frugal, with EPA fuel economy estimates of 27 mpg city, 31 mpg highway and 29 mpg combined with AWD. The front-drive Seltos S is a bit better at 29/34/31.

The turbo 1.6-liter ups output to 175 horses and 195 lb-ft, while only suffering to the tune of 25 mpg city, 30 mpg highway and 27 mpg combined. Kia probably could have gotten away with offering the Seltos exclusively with the weaker engine (plenty of competitors certainly have no problem with that), but the grunty turbo engine is welcome in the heavier AWD models, which top out just north of 3,300 pounds. Only the aforementioned S model with FWD comes in under the 3,000-pound mark. 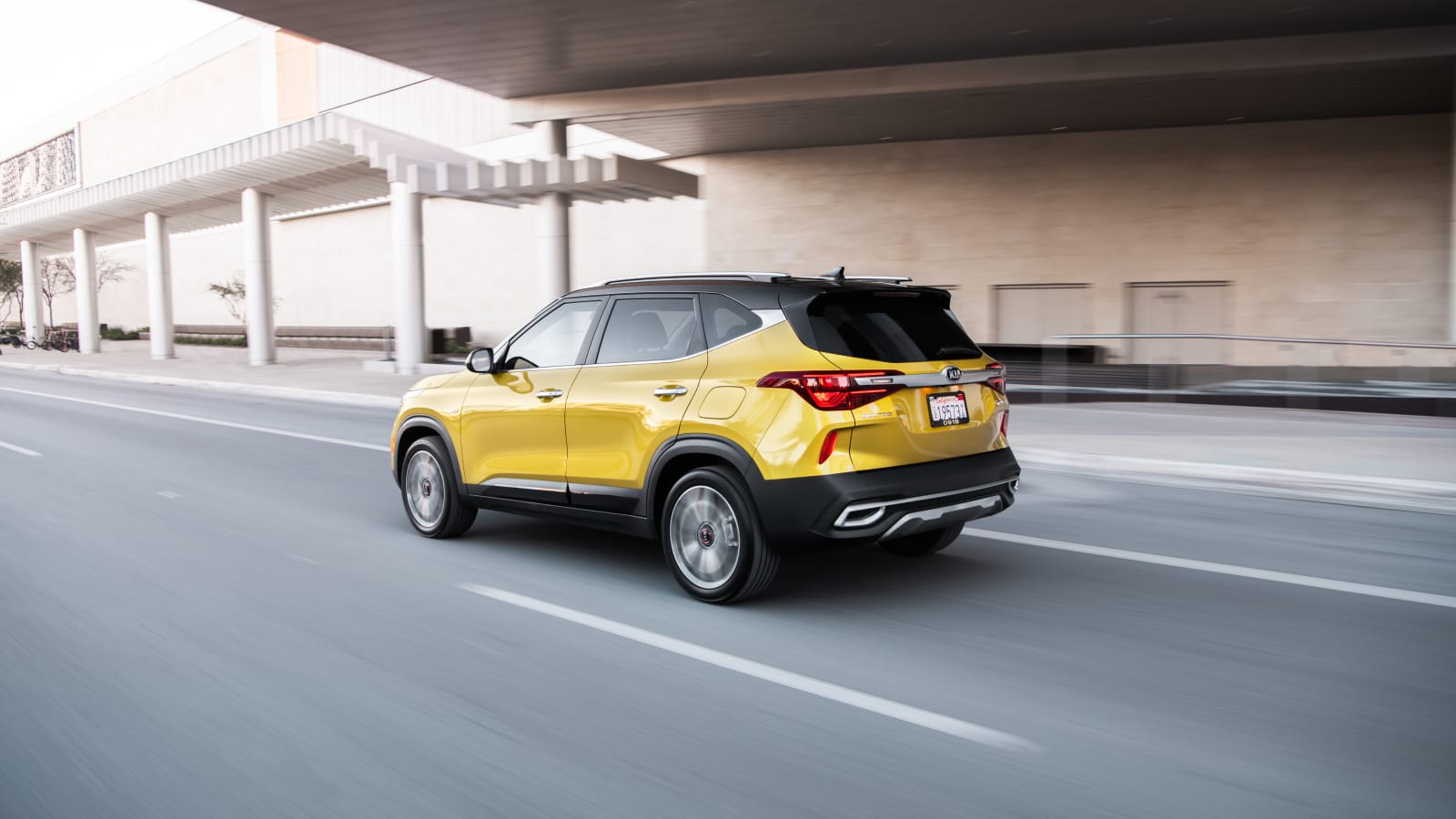 What does this translate to on the road? Kia’s test vehicles were exclusively equipped with the turbocharged engine and AWD. Having 175 horsepower does not a rocket ship make, but the Seltos is reasonably quick. We were never concerned about highway merges or passing maneuvers, even in wide-open Texas, where every type of road transition is treated like an invitation to a drag race by all parties involved.

When the roads get twistier, the Seltos behaves less like the Soul that inspired it and more like the crossover that it is. It exhibits more perceptible body roll in the corners, and its tires are clearly intended to foster efficiency rather than sporty dynamics. This may read like a lukewarm appraisal, but we actually found the Seltos quite pleasant to drive. There’s essentially no wind noise even at Texas highway speeds, and while we spent the vast majority of our time on road surfaces that would charitably be described as sub-par, the tires didn’t seem particularly noisy, either. We’ll reserve final judgment on that until we can evaluate the Seltos in familiar terrain.

Inside, the Seltos shows more of its shared Soul DNA. The small hatchback’s "sound-connected mood lighting" (we like “party mode” better) made the jump to the Seltos, and the Bose speakers also sport a cool fractal design that is both interesting and attractive.

The front seats offer decent adjustment ranges and were reasonably comfortable for the duration of our time behind the wheel, while the back bench has plenty of standard leg- and headroom along with the added bonus of standard reclining rear seat backs. Those aren't a given in this size of SUV. Even with the rear bench in its most upright setting, a 6-foot-2 driver could sit behind his preferred front seat position.

Behind that second row, you get 26.6 cubic feet of cargo space, which would make it larger than all the sub-compact SUVs. That figure is only a few cubes shy of Kia's Sportage, but the tables actually turn when you drop the back seat flat. The Seltos has 62.8 cubes to the Sportage's 60.1. 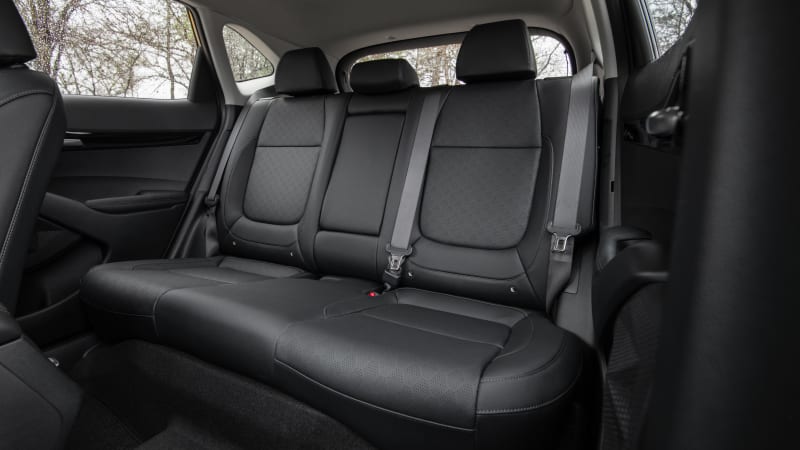 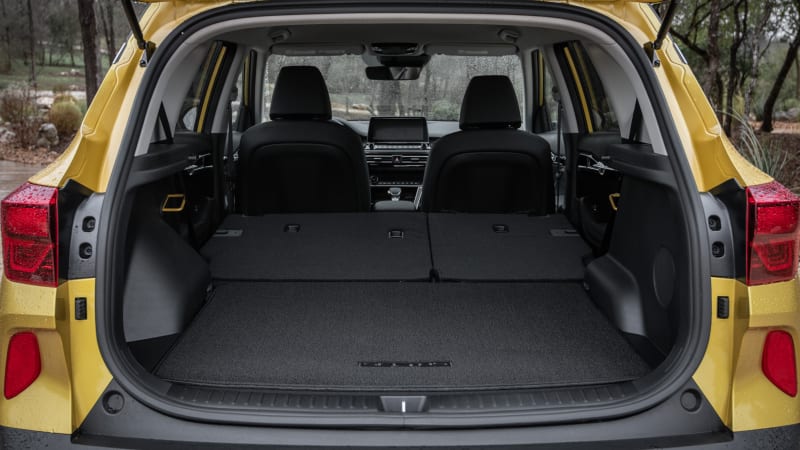 Our SX test vehicle hit the register at $29,010, including destination, which isn’t exactly cheap, but it's loaded with features. True, dual-zone climate control and a heated steering wheel aren't among them, but  you still get a 10.25-inch touchscreen, integrated navigation, perforated leatherette seats, adaptive cruise control with automatic stop and go, and Kia’s semi-autonomous highway drive assist, which behaves like most mainstream semi-self-driving suites, requiring only a light touch on the wheel when you’re on the freeway.

It’s bleaker in the lower end of Seltos lineup, and buyers may find themselves compelled to option up into better-equipped trims. The base-model LX ($23,110) comes standard with all-wheel drive, but is woefully devoid of advanced safety features, coming with only a rear seat occupancy reminder and government-mandated tech such as a rearview camera and lots of airbags.

Stepping up to the S doesn't actually cost you anything apart from all-wheel drive (it carries the same $23,110 starting price), but counters that by adding lane departure warning, lane keeping assist, automatic high beams, forward emergency braking and a host of other extras that include fancier trim. Kia had one of these on hand, and apart from the smaller, 8-inch touchscreen and a few blank switch plates in the center console, the S doesn’t come off as an economy car. Its cloth feels durable and sports an attractive pattern, bolstering the cabin’s appeal. 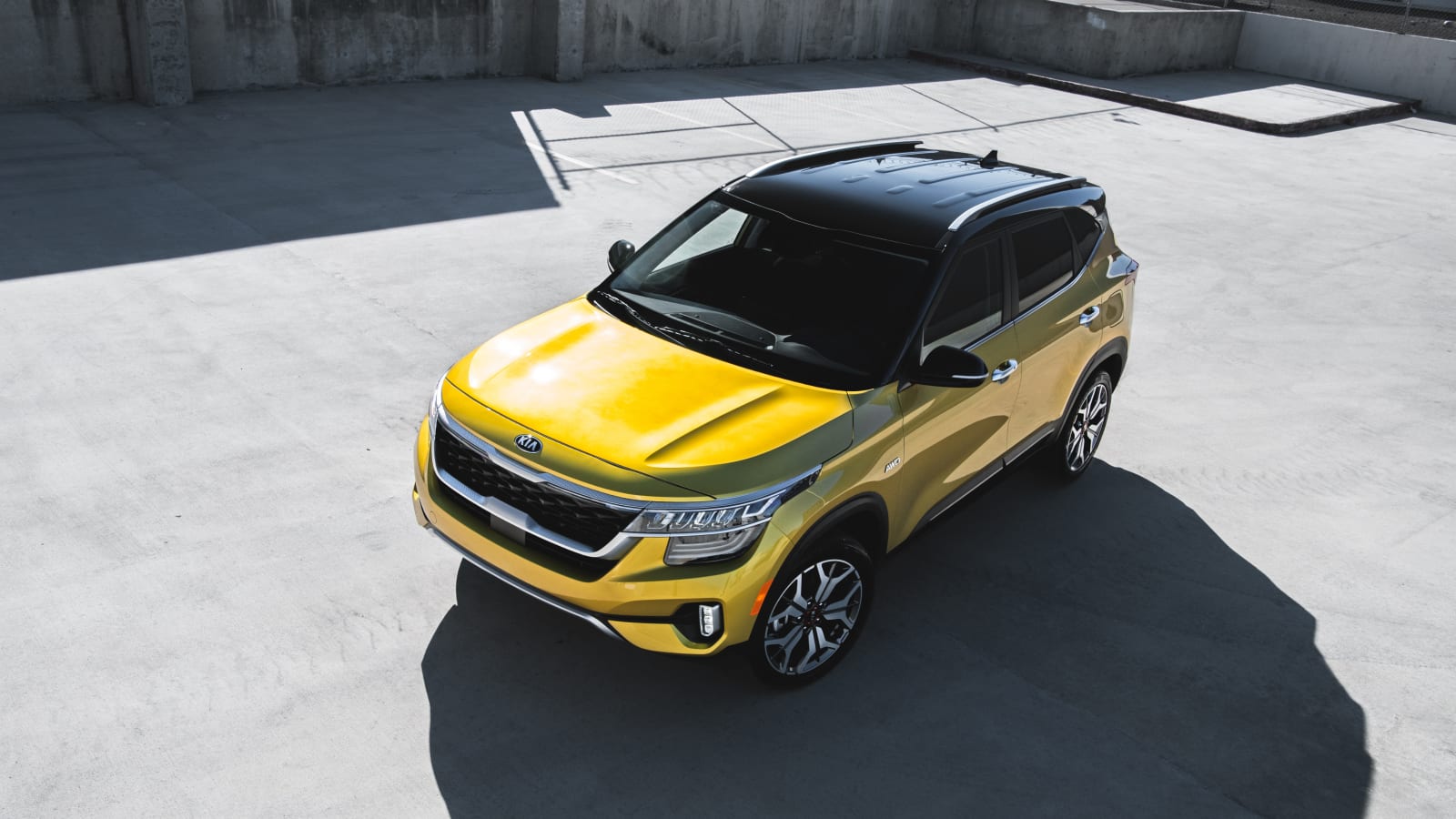 Options throughout the line are few, as features are largely doled out within the trim levels that also include a turbocharged S and mid-grade EX. Notable among those options are multiple two-tone paint packages ($345) and a sunroof. Unfortunately, you can't get them together. Kia says this is a production constraint and hopes to make it possible to combine the two down the road.

Also potentially in the pipeline is a Seltos X-Line variant. Like the Soul X-Line, it would be an off-roady appearance package rather than an actual answer to more rugged entries from Jeep and Subaru. Kia says this is still in the exploratory phase, but we’d be shocked if it’s not introduced within the next year or two.

All in all, the Seltos is an attractive, competent package and a compelling draw for those who want a vehicle that's obviously crossover with a small footprint and all-wheel drive. And if the latter isn't a must, you can save some money and gas by sticking with the front wheels. Kia expects the Seltos will draw buyers from both the entry-level and the empty-nester ends of the spectrum. By our measurement, it’s economical enough to attract the former and comfortable enough to satisfy the latter. It’s a baby crossover with the soul of a Soul. What’s not to like?