The Jaguar XF is never the four-door you think of first when it comes to picking a luxury sedan. After all, you’re much more likely to see a BMW 5 Series, Mercedes-Benz E-Class or Audi A6 roaming the streets than you are to see Jag’s midsize sedan. The numbers back this up, too, as Jaguar sold a middling 748 XFs in the U.S. in 2020.

Does that mean this drive in the refreshed 2021 Jaguar XF could be one of our last? Perhaps, and as we pointed out in our first drive of this XF, getting rid of the model would mean the end of the Jaguar sedan. The XE and, most regrettably, the XJ have already met their maker. What a sad day that would be. But that day hasn’t come yet, which means it’s time to take this entry seriously.

The specific version that was sent to review is the top-of-the-line Jaguar XF P300 R-Dynamic SE model that starts at $51,145. Even this one is cheaper than what has traditionally been considered its main competitors: the base BMW 530i or Mercedes-Benz E 350. Instead, the Jaguar XF lineup is priced to be in what is clearly a lower sedan segment with the Lexus ES, Acura TLX, Cadillac CT5 and cheaper Genesis G80s. The XF stands a chance on this playing field; on the previous one that flies the German flag? Not so much.

Walking up to the car is enough to deliver our first demerit. It comes in an area that was traditionally Jaguar’s strong suit: distinctive design. The XF’s general look hasn’t changed much since the 2016 model year when this generation was introduced, and the mid-cycle refresh didn’t do enough to help. It’s not a bad-looking car, but Jaguar’s taken no chances, and it’s getting boring. That wasn't the case with the original XF, which stood out boldly inside and out. Today's XF doesn't. We'd much rather stare at the slinky new TLX or stately G80. And while the sleek LED tails are a nice new touch, the elimination of its elegant dual exhaust for a hidden exhaust tucked up under the bumper is a step backwards — especially for the uprated and more powerful P300 R-Dynamic trim.

At least output from the 2.0-liter turbocharged inline-four — the supercharged V6 option is dead, much to our dismay — is more than acceptable for this class, sitting at 296 horsepower and 295 pound-feet of torque. Acceleration is largely emotionless with a small bit of response lag after stepping into the throttle — it does hit 60 mph in 5.8 seconds. It’s good that Jaguar didn’t gin up a comical piped-in audio performance, but we could go for something to let occupants know this XF is the hotter one, and not the base 246-horse version. The lack of any kind of auditory excitement is even more disappointing when we think back to the snarly supercharged V6 available pre-refresh (and we'll try to completely bury thoughts of the original XF's silky old supercharged V8). You’ll be getting 25 mpg combined with this four-cylinder versus 23, though the tradeoff is hardly worth it.

Transmission performance from the ZF eight-speed automatic is similarly milquetoast. Jaguar’s big, new metal paddle shifters are among the best in the business on this XF, but a lack of snappiness when tapping them disappoints. It’s best to just turn the drive mode selector to “Dynamic” and put the transmission into Sport mode, as the computer is smart enough to recognize when you want to hold gears and downshift under braking.

Perhaps cat-like handling reflexes will save the XF’s dynamics? That’s what makes the TLX 2.0T such a desirable buy, even if we have some misgivings with the powertrain. Unfortunately for Jaguar, the XF is middling here, too. Its extra size over the discontinued but dynamically splendid XE is duly present. We appreciate our model’s adaptive dampers (part of the $1,350 Dynamic Handling Pack) and their ability to stiffen up and aid handling, but they’re no magic bullet to making the XF a dynamic wunderkind. The XF is good enough to be in the same league as other “sport sedans,” but it doesn’t stand out as a leader. It’s not soft and spongy, but it isn't sharp either — other sedans cut through corners with much more rigidity and confidence than this one. Properly done steering tuning means the wheel weights up as it should in corners, but it’s lacking in road feel and communication. There’s a fair amount of lean back and forth, but it’s able to handle quick transitions without getting sloppy. Basically, expect something good, but not great from the XF when you put it through the wringer. 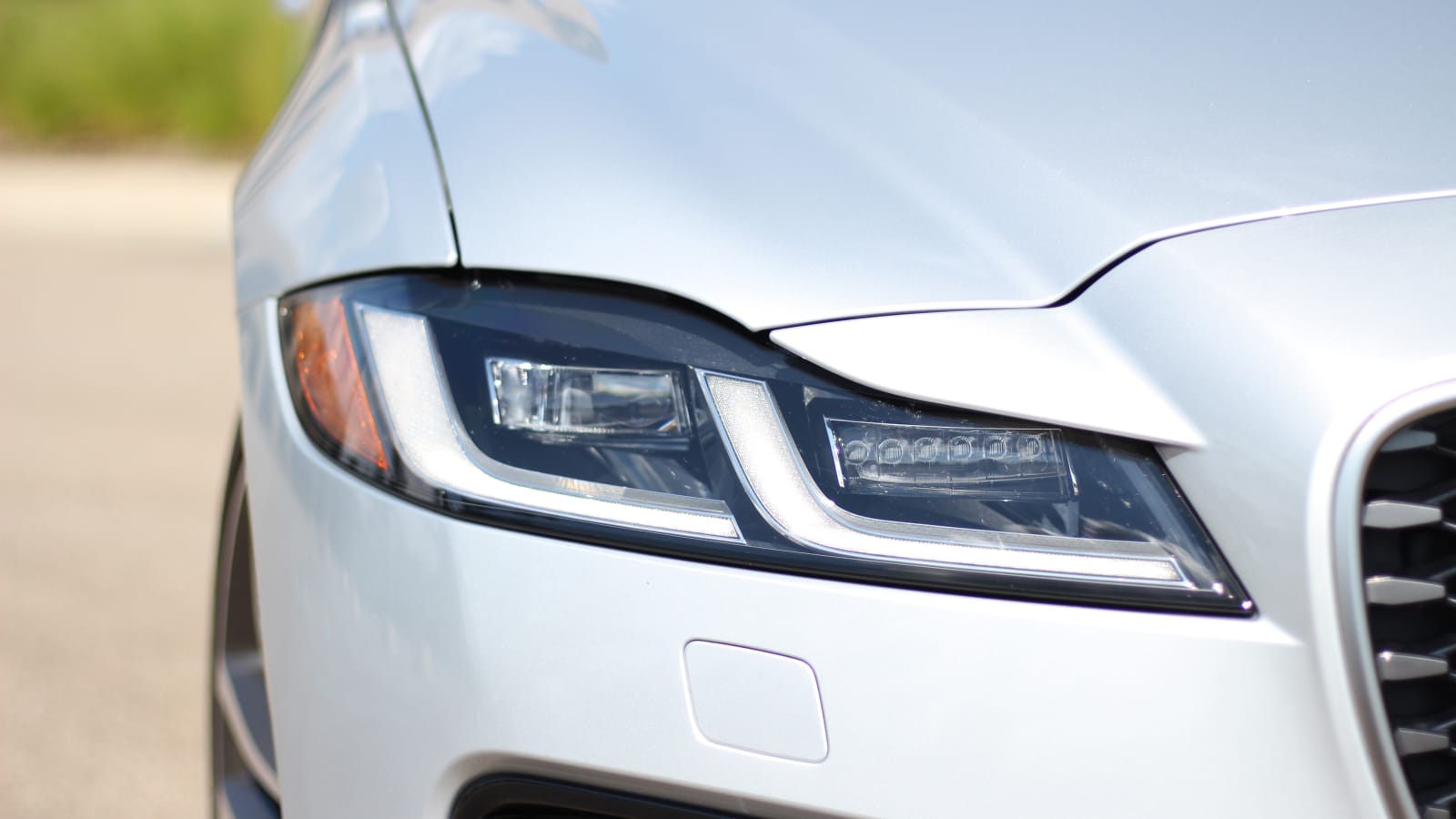 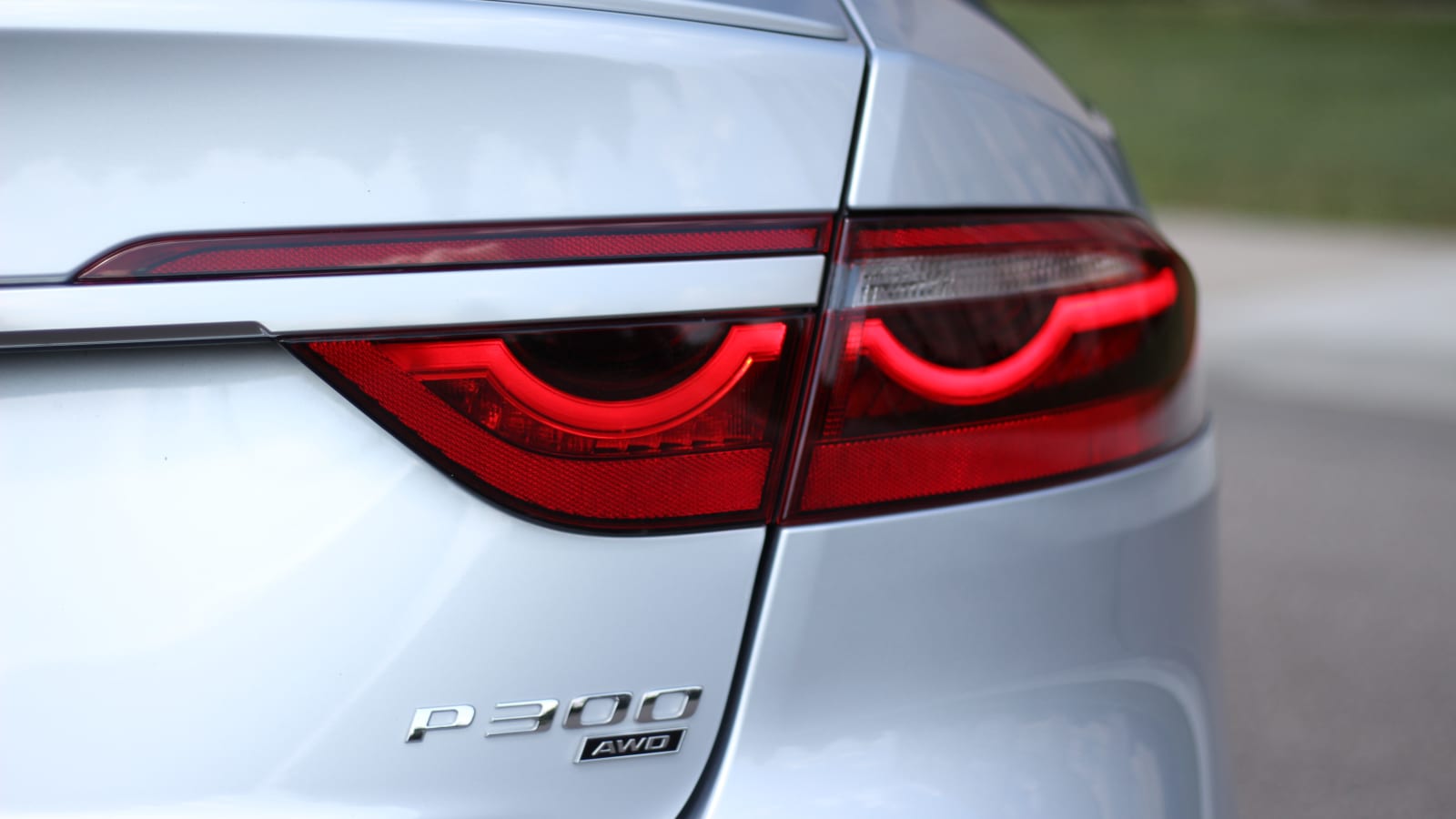 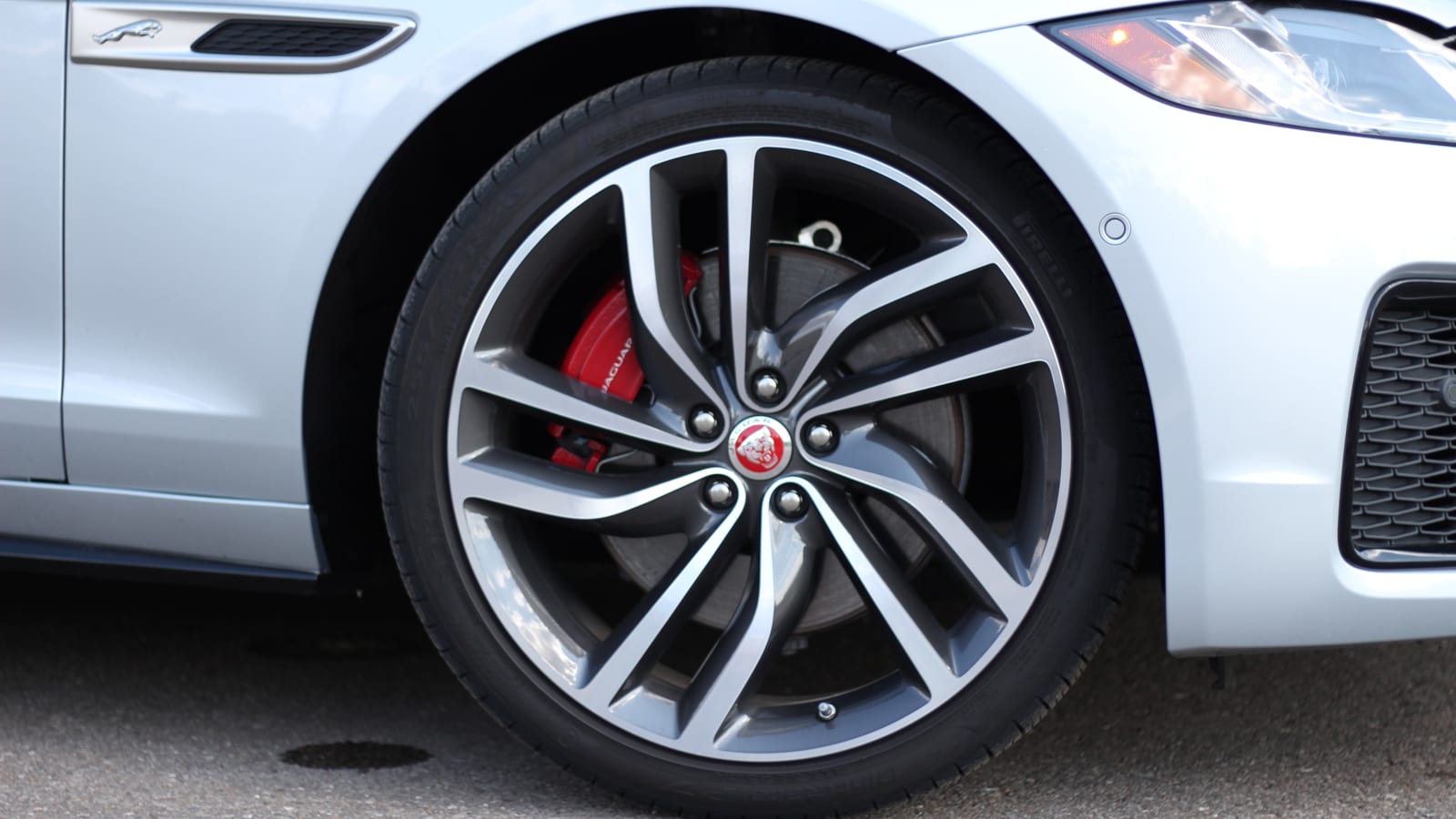 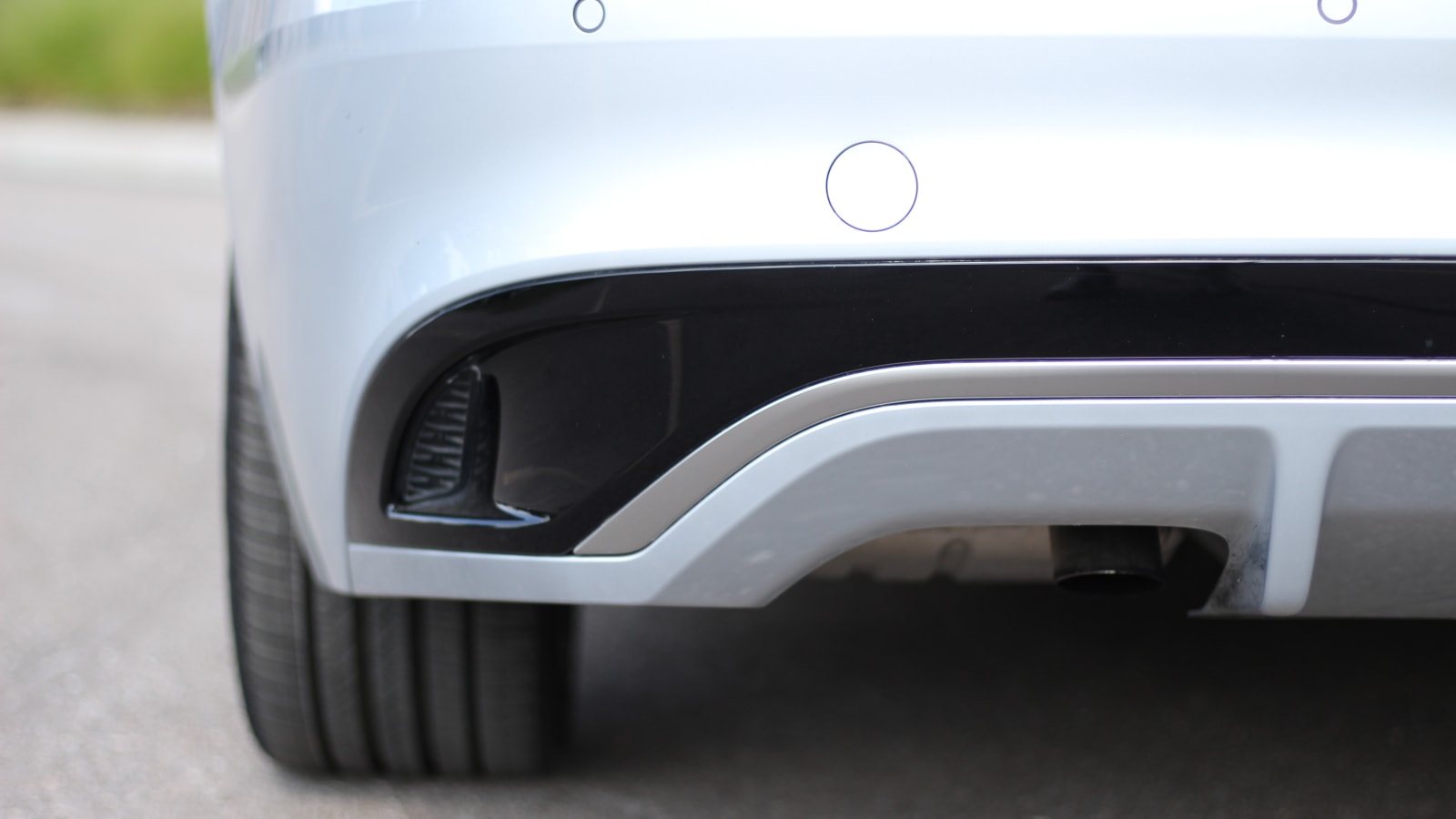 Driving enthusiasts would be better served by a TLX or CT5 at this price point, but if the commute to work is all you need, the XF is up for the task. In Comfort mode, the ride is incredibly forgiving and nears plush territory. Plus, Jaguar’s refreshed interior gives it all the charm you might want on the daily drive.

The new 11.4-inch Pivi Pro infotainment screen looks upscale and luxurious in the dash, and more important, works so much better than the outgoing Jaguar infotainment system. The same cannot be said for the climate/seat controls. They look good, but are overly complex, requiring too many pushes, pulls and glances downward to operate easily in a moving car. Thankfully, the light-up controls on the steering wheel don’t share the climate controls’ complexity. Instead, they’re just a neat party trick and work as well as they look.

Jaguar did good work inside this refreshed XF to make it compare well to its rivals (and be less drab and derivative than the frankly disappointing original). It’s distinctive and brings a certain British charm with it — the “EST 1935 Coventry” text is well received and a classy touch. You can get much better interior color options than this Ebony (black) leather, as Jaguar offers a classic tan, fresh-feeling white/black and red leather option. One interior feature we could go without, though, is the heated windshield. As in other JLR products, the heating elements that present as squiggly lines across the windshield are more trouble than they’re worth, as they’re a nuisance to look past at night. 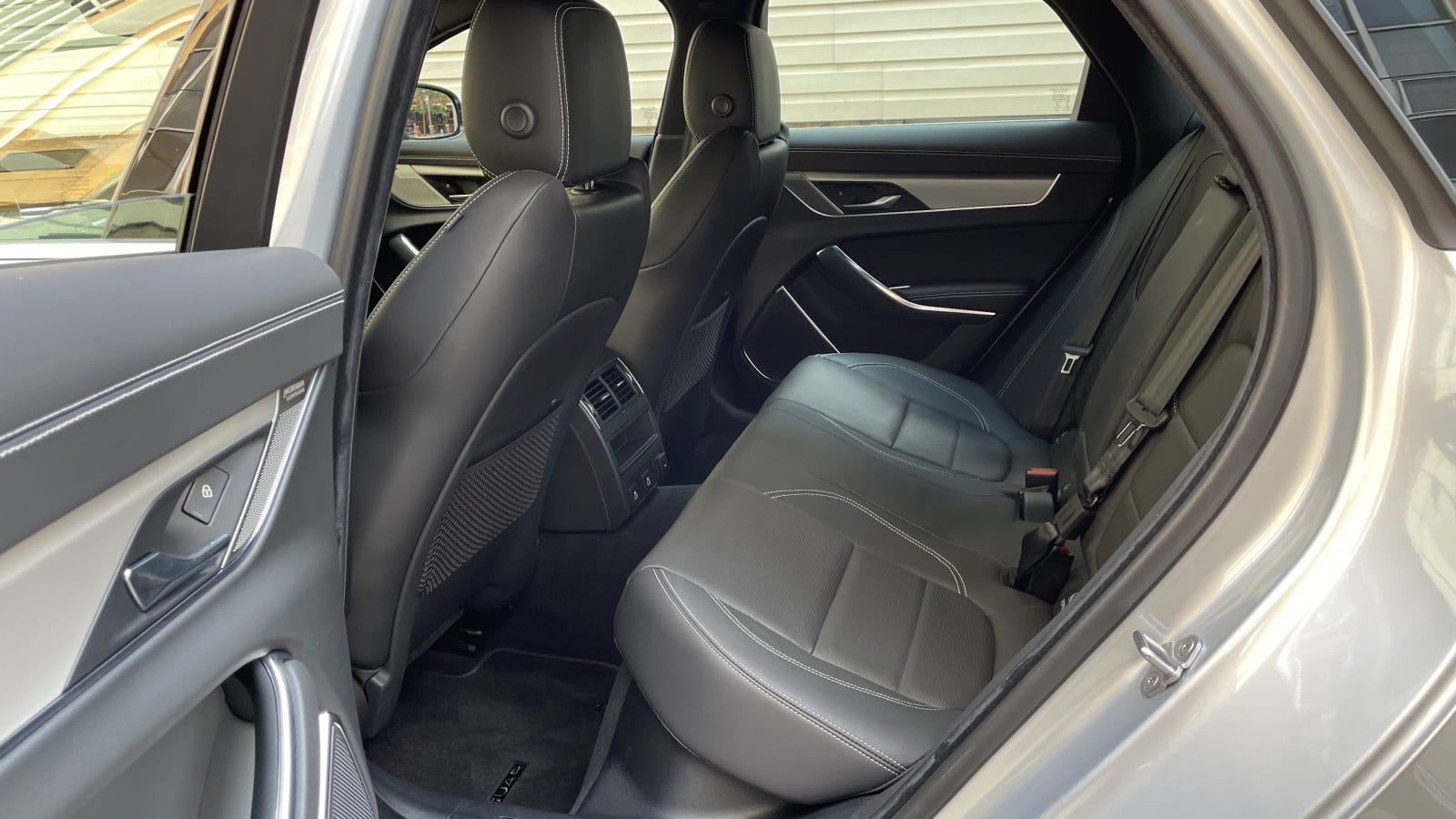 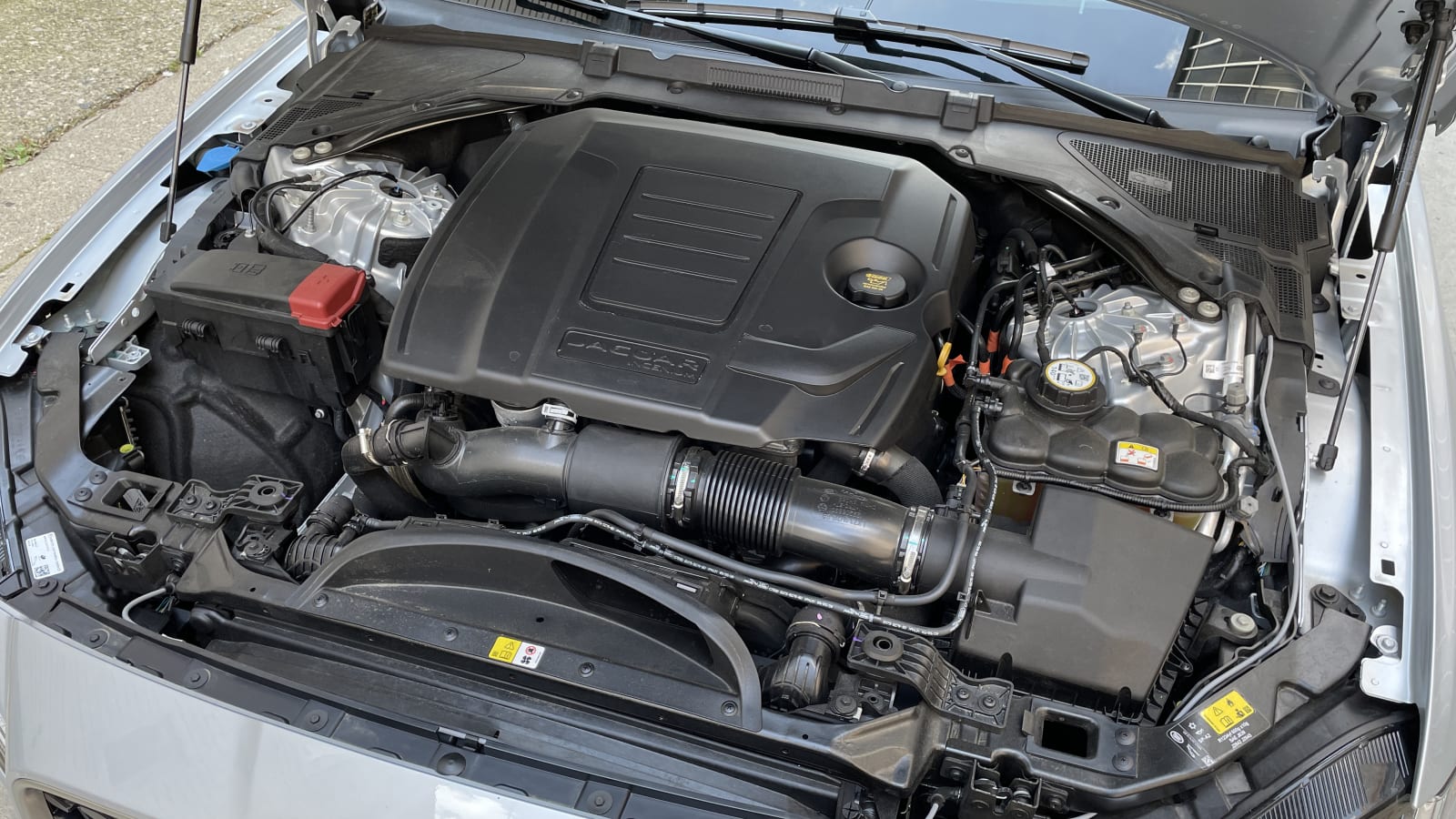 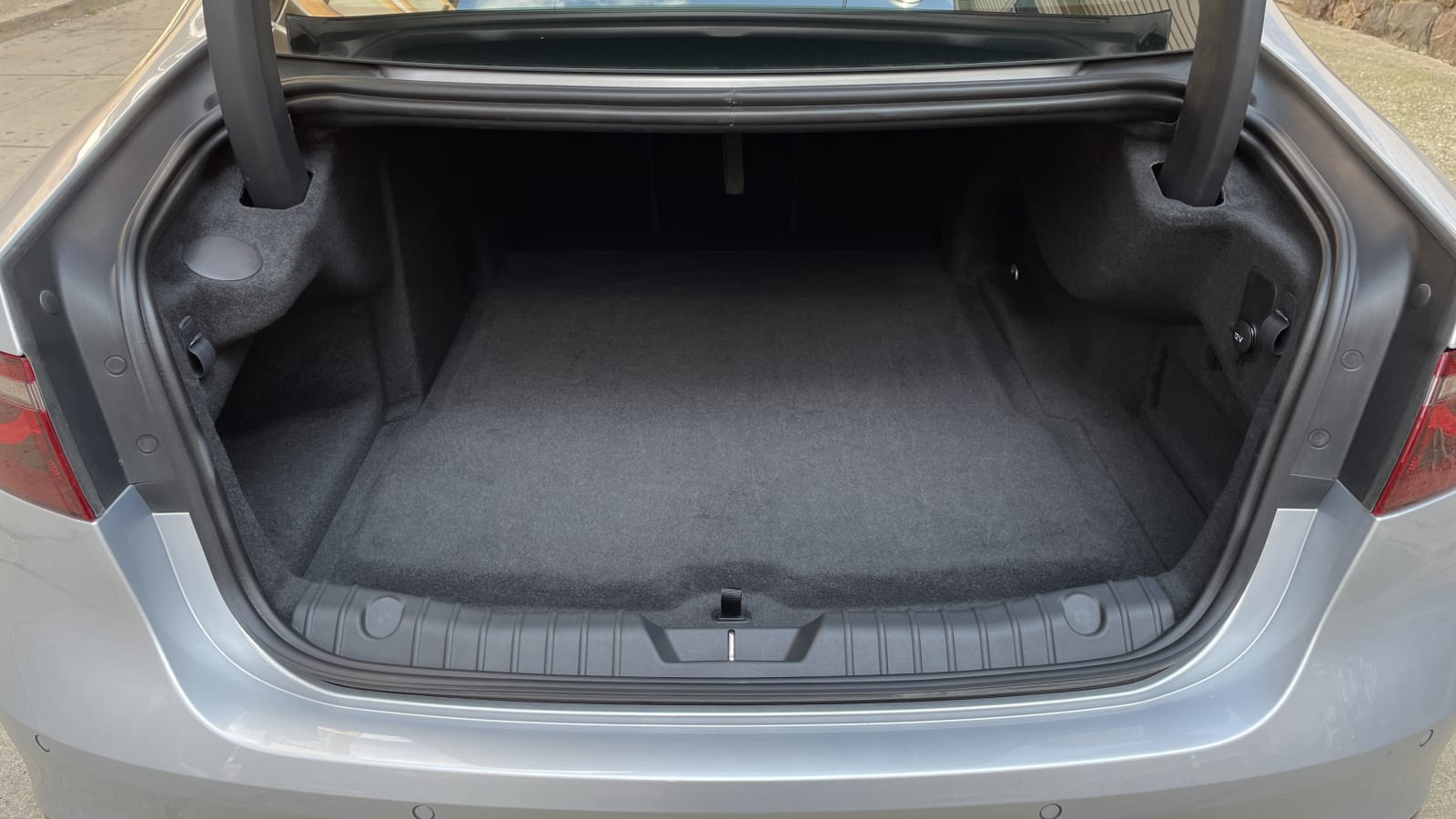 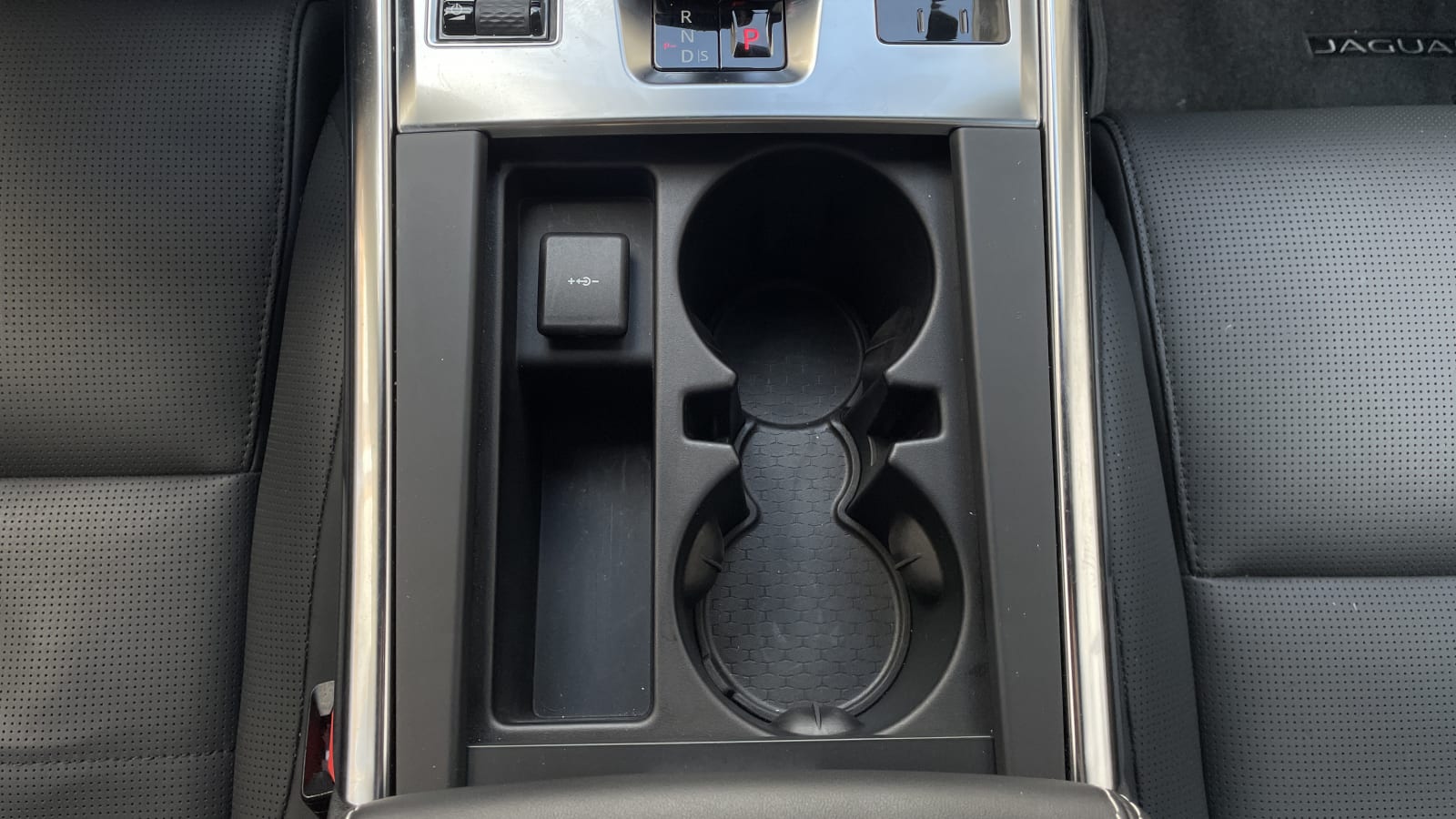 This being a midsize sedan, the backseat should make itself useful. And it is, to a certain degree. It’s neither spacious nor constraining, as it toes a fine line of usefulness. You could put a couple of clients in the back seat on the way to the airport comfortably, but don’t think of it as a road trip or baby-toting warrior with room to spare for everybody. The 17.8-cubic-foot trunk is at least big enough to hold the suitcases for the quick airport trip, and in that way, clearly exceeds what you'd find in a TLX and definitely a CT5. Sadly, the XF Sportbrake wagon is no longer around for those with even greater cargo needs.

From a price and powertrain perspective, Jaguar is punching much further downward with the XF this time around. It’s offering entry-level, relatively cheap options with the P250 in an effort to capture the cheaper side of the luxury market while maintaining its reasonably spacious size. However, the value argument isn’t as strong when you get to the XF’s higher trims.

You need to tack on a bunch of extras that are not cheap to match the more value-oriented pricing of the ES, TLX and G80 that Jaguar is seemingly taking aim at. Getting the XF to the same level of equipment and features requires digging into the options list to the point that you get to our test car’s $62,295 final price. Its closest analog in price, size and market position is ultimately the Cadillac CT5, but we’d much rather be driving the Cadillac than this Jaguar. Ditto the TLX. If the Jaguar offered a similar payoff in its driving experience, then its higher price could be justified. As it stands, the immediate competition drives better and doesn’t hit your wallet as hard.

You’re going to need to really want the Jaguar Leaper for the XF to make sense, which is certainly one of the reasons why sales figures stayed under four digits last year. At the very least, those who do drive home with an XF will find a much more technologically modern and luxurious vehicle in their driveway. We’d simply point you in the direction of other dealerships before Jaguar’s if you’re set on buying a luxury sedan.