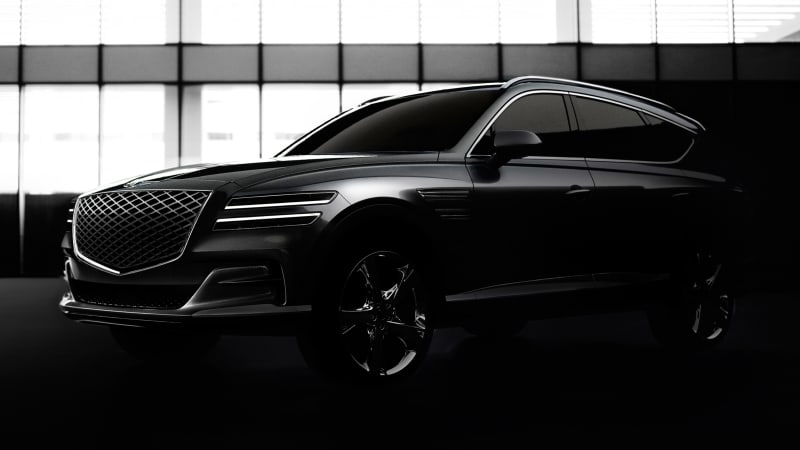 Roughly two and a half years since the concept was revealed, Genesis has finally revealed its first production crossover, the 2021 Genesis GV80. At least its design has been revealed, since mechanical and equipment details are still yet to be announced. The company did reveal what the "V" stands for, though: versatility.

On the whole, the GV80 looks almost exactly like the concept. It has the same formal SUV shape, almost like a Bentley Bentayga, but not as overwrought. It retains the concept's upswept window line and large D-pillar. At the front is the signature Genesis grille that recently appeared on the redesigned G90. It's actually a little larger than the concept's. The production GV80 also picks up marker lights on the fenders that continue the design of the headlights just like the new G90.

We also get our first look at the GV80's interior. It has a low dashboard with a thin, unbroken air vent that stretches the length of it. The short, wide infotainment screen sits on top of the dash, and the center console rises up and over part of the dash where a set of climate control buttons rests. The center console has a low-profile shifter knob and an infotainment control knob. The steering wheel is a somewhat unique design with one big spoke across the middle.

The GV80 will go on sale in South Korea in January, with other markets following. We expect the company will have more details on engines, equipments and such close to the on-sale date. We know it will use the same platform as the Genesis sedans with rear-wheel drive as standard and all-wheel drive as an option. It will surely have the same twin-turbocharged V6 available in all the Genesis sedans as well as the Kia Stinger GT. Whether any other engines, such as the turbocharged four-cylinder from the Stinger and G70 will be offered remains to be seen.