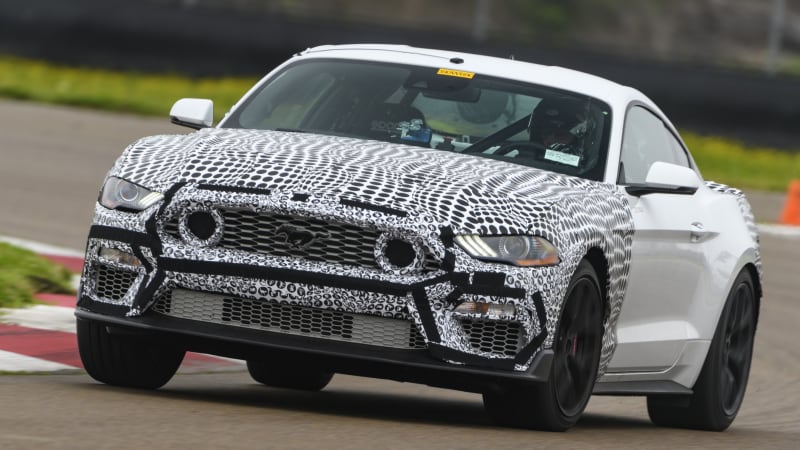 If a new report in Ford Authority can be believed, we have all aimed far too low when it comes to the impending Ford Mustang Mach 1. Stories all over the web, including here, figured the Mach 1 would slide into the lineup as a Mustang Bullitt with a few extra sprinkles on top. Even with a mountain of circumstantial evidence that the GT350 and GT350R are punching their tickets to the afterlife this year alongside the Bulllitt, coverage of the Mach 1 assumed a gentle power bump over the Bullitt's 480 horsepower. But get this: Ford Authority's "sources familiar with product plans" claim engineers are shooting for 525 hp and 450 pound-feet of torque from the Mach 1's free-breathing 5.0-liter Coyote V8. Since the naturally aspirated 5.2-liter Voodoo V8 in the Shelby GT350 produces 526 hp and 429 lb-ft, the rumored figures would make the Mach 1 a GT350 with sprinkles and a cherry, at least as far as output goes.

The Bullitt creates its 20-hp increase over the standard Mustang GT thanks to an intake manifold based off the one in the GT350, larger throttle bodies, and an ECU tune. We have no idea how Ford engineers would extract the claimed 45 hp and 30 lb-ft jump over the Bullitt from the V8 in the Mach 1. Nevertheless, that amount of grunt and spin — again, if true — throws brighter light on Ford Icons head Dave Pericak's assertion that the Mach 1 would be "the most track-capable 5.0-liter Mustang ever" and "reward our most hardcore Mustang enthusiasts who demand that next level of power, precision, and collectability." The numbers also give purpose to the GT350 addenda seen on Mach 1 prototypes, such as the rear wing and Michelin Pilot Sport Cup 2 rubber. Beyond the wheels and big Brembos on the prototypes, there could be more components from the Mustang GT Performance Package 2 under the skin. The Mach 1 could end up delivering on-track performance a mere hoof or two shy of the GT350 without the non-stop, mischievous rawness of the Shelby.

A 525-hp Mach 1 changes the MSRP math, too. Yet again, the assumption has been a purchase price of something like $50,000, just a couple grand over the Bullitt, and well short of the $60,400 GT350. Now that we're musing on a model with everyday manners and mighty performance, probably only in production for a couple of years until the next-generation Mustang arrives — and keeping in mind the $33,000 gap between the GT Premium and Shelby GT500 — we'll be aiming higher on price as well. This pony just got a lot more interesting.