The speedometer touches 83 mph after standing on the gas while exiting a corner in a deserted sand wash, with the 2021 Ford F-150 Raptor’s tires resolutely planted to the uneven surface. Another rutted bend comes quickly into view, at which point I lift off the throttle and lightly trail brake into the corner. The truck drifts predictably and gradually until I sight the corner exit, bury the loud pedal and send it down the next brief straight. I’ve barely driven this truck in anger and have never seen this stretch of wash before, but I’ve already developed complete faith in how the new Raptor will respond.

Similar thoughts go through my head as I later send it skimming across the top of deep whoop-de-doos, scramble up hills and over uncertain rocky terrain, and schuss it through cone gates that are laid out like a sandy Super-G giant slalom course on the flanks of humongous dunes. The new Raptor gobbles it all up and spits it all out – in twin roosts of sand, at times – with better stability and more persistent power delivery than any previous Raptor before it. It frankly behaves as if it was built to do nothing else.

But this is nothing like a one-dimensional machine. Around town, the now crew-cab-only Raptor benefits from all of the comforts and thoughtful touches that adorn the latest F-150’s cabin, and it comes standard with a 12-inch instrument panel and a 12-inch center screen with Sync 4 and wireless smartphone connectivity. Its daily-drive ride is smooth, flat and largely devoid of aftershake after hitting rough patches. You’d be more than happy to spend all day behind the wheel, which is a handy thing because its 36-gallon fuel tank gives it well over 500 miles of highway driving range.

One single change is responsible for most of this, and that is the third-generation Raptor’s abandonment of leaf spring rear suspension in favor of a five-link setup with coil springs. If that sounds familiar, that’s what underpins most Ram pickups, including the Raptor's most obvious competitor, the Ram 1500 TRX. This setup makes for a smoother on-road ride, but it also helps a truck put power to the pavement (or dirt) with far less axle hop. No towing was involved in this event, but I fully expect improved trailering stability in crosswinds and on winding descents thanks to the new suspension's fifth link, the lateral panhard rod.

The Raptor’s interpretation of link-coil suspension is notably different from the TRX’s in two ways. Its four primary axle-locating links are considerably longer and connect farther forward on the frame, and its massive three-stage, progressive-rate coil springs connect to lower spring seat brackets that are bolted behind the rear axle instead of sitting atop it. The longer links open up performance potential, and the bolt-on spring seats create interesting possibilities for the upcoming Raptor R – not to mention aftermarket suspension kits.

In showroom configuration, it adds as much as a full 15 inches of rear axle travel, which is 1.1 inches more than the outgoing Raptor and a full inch more than the TRX. What’s more, increased travel is an indicator of a possible increase in axle articulation. Alert readers may remember how the TRX nearly maxed out my Flex Index ramp, so I might not be able to make a successful Raptor RTI measurement without first building a ramp extension. But the case for more overall articulation and the potential for a TRX-beating RTI score doesn’t begin and end in the rear.

That’s because the new Raptor's front suspension has also undergone improvements that increase its travel to 14.0 inches, which is a full inch more than both the outgoing Raptor and the Ram TRX. This is more a case of design optimization, because the same sort of wide-track double-wishbone suspension remains in play up front. The new Raptor gets new aluminum steering knuckles that optimize the upper ball joint’s range of motion, its axle joints were massaged to increase maximum angularity, and the front axle and differential assembly was lowered about a quarter-inch.

The above suspension travel improvements apply to Raptors fitted with the standard 35-inch tires (LT315/70R17 Load Range C). There’s also a new class-exclusive 37-inch tire option (37x12.5R17LT Load Range C), but they come with an inch less front and rear travel because of tighter wheel-well clearance. Both of them are BFGoodrich All-Terrain T/A KO2 tires mounted on 17-by-8.5-inch rims, but the 37-inch setup has a different wheel offset to help them fit. The 35-inch setup offers bead-lock-capable rims as an option, but such rims are standard on the 37-inch fitment. In each case, the special bead-lock ring itself is an after-sale accessory.

Both tires are paired with the same 4.10-to-1 axle ratio, so the 35-inch version feels more lively out of the hole because shorter tires produce shorter overall effective gearing. A 37-inch Raptor generally floats a bit better over the whoops, and it absolutely has more ground clearance (13.1 versus 12.0) and better approach, departure, and breakover angles (33.1/24.9/24.4 degrees versus 31/23.9/22.7, respectively). But don’t be too hard on the 35-inch Raptor. All four of its above stats beat those of the Ram TRX, and I never found the limits while horsing one around in the desert.

I lean toward the 35s because I’m an articulation and acceleration snob. The 35-inch setup also returns better fuel economy, especially on the highway, to the tune of 15 mpg city, 18 mpg highway and 16 mpg combined versus 15/16/15 mpg for a 37-inch truck. You’ll want to make this choice before you buy, too. Fitting a 37-inch full-size matching spare under the bed wasn’t trivial. It required meaningful changes to certain crossmembers, the spare tire winch, and the rearmost crossmember/trailer hitch. The two trucks are physically different. In other words, you won’t be able to simply slap a 37-inch aftermarket spare underneath if you start with a 35-inch Raptor.

Different bump stops account for the physical travel and articulation differences, but the coil springs themselves are the same. It’s the position of the lower spring seats that differs, as well as the internal tuning of the Fox Live Valve 3.1-inch position sensitive adaptive dampers. These dampers are pretty sweet, with multiple circuits of passive position sensitive internal-bypass valving layered atop an electronically-regulated secondary base valve that’s actuated by a predictive algorithm to make further bypass adjustments. It attempts to predict the terrain ahead by monitoring both the driver’s throttle and steering inputs, and the profile of the terrain using suspension position sensors at all four corners.

Do these shocks work better than the Bilstein BlackHawk E2 dampers fitted to the Ram 1500 TRX? On pavement, I give the edge to the Raptor, but it’s an open question off-road because I have not driven a TRX on the same courses in back-to-back conditions. But the Raptor has something going for it that may be a bigger factor than the shocks: it weighs considerably less than a TRX. A 2020 Raptor weighs 5,697 pounds, and the 2021 Raptor, despite all its differences, only weighs a smidge more at 5,710 lbs. Adding 37-inch tires brings the curb weight up to 5,851 lbs, but even this is still nearly 500 lbs lighter than the portly 6,350-lb TRX.

This is perhaps why the Raptor’s largely carryover 3.5-liter twin-turbo EcoBoost V6 doesn’t feel like a comparative anchor around your neck despite making the same 450 hp and 510 lb-ft of torque as before. The Raptor simply has 640 fewer pounds to contend with than the TRX. And I say largely carryover because of two changes: the engine management software has been tweaked to lower the torque peak from 3,500 to 3,000 rpm, and the exhaust system has been reworked to eliminate the flatulent drone that EcoBoost Raptors have thus far been saddled with. There’s an extra “trombone loop” on the right exhaust bank’s midpipe that gives both sides equal tube length ahead of the muffler, and there’s a drive mode-dependent valve system farther downstream that opens when you need full beans.

There’s no denying that the TRX’s 6.2-liter Hemi has the Raptor outclassed on paper. It’s hard to argue against 702 hp and 650 lb-ft of V8 grunt, unless you’d be embarrassed by its dismal fuel economy of 12 mpg combined. Or bankrupted by it. The EPA says you'd spend an average of $1,650 more per year filling the TRX vs a 2021 Raptor wearing 37-inch tires.

Beyond that, the Raptor also has gearing on its side. Its transmission has 10 gears instead of eight, and its final-drive ratio is 4.10-to-1 instead of 3.55-to-1. Still, people will grouse about the power difference. Ford should have an answer for that with the 2022 Ford Raptor R, but the way this new Raptor’s suspension is put together makes me believe the R might be more than just a racier motor.

Despite these changes, 2021 Ford Raptor payload and tow ratings are higher than they were last year. Payload has risen from 1,200 to 1,400 pounds, and the tow rating has been increased from 8,000 pounds to 8,200 pounds. Both ratings apply whether you stay with the standard 35-inch tires or choose the 37-inch option. 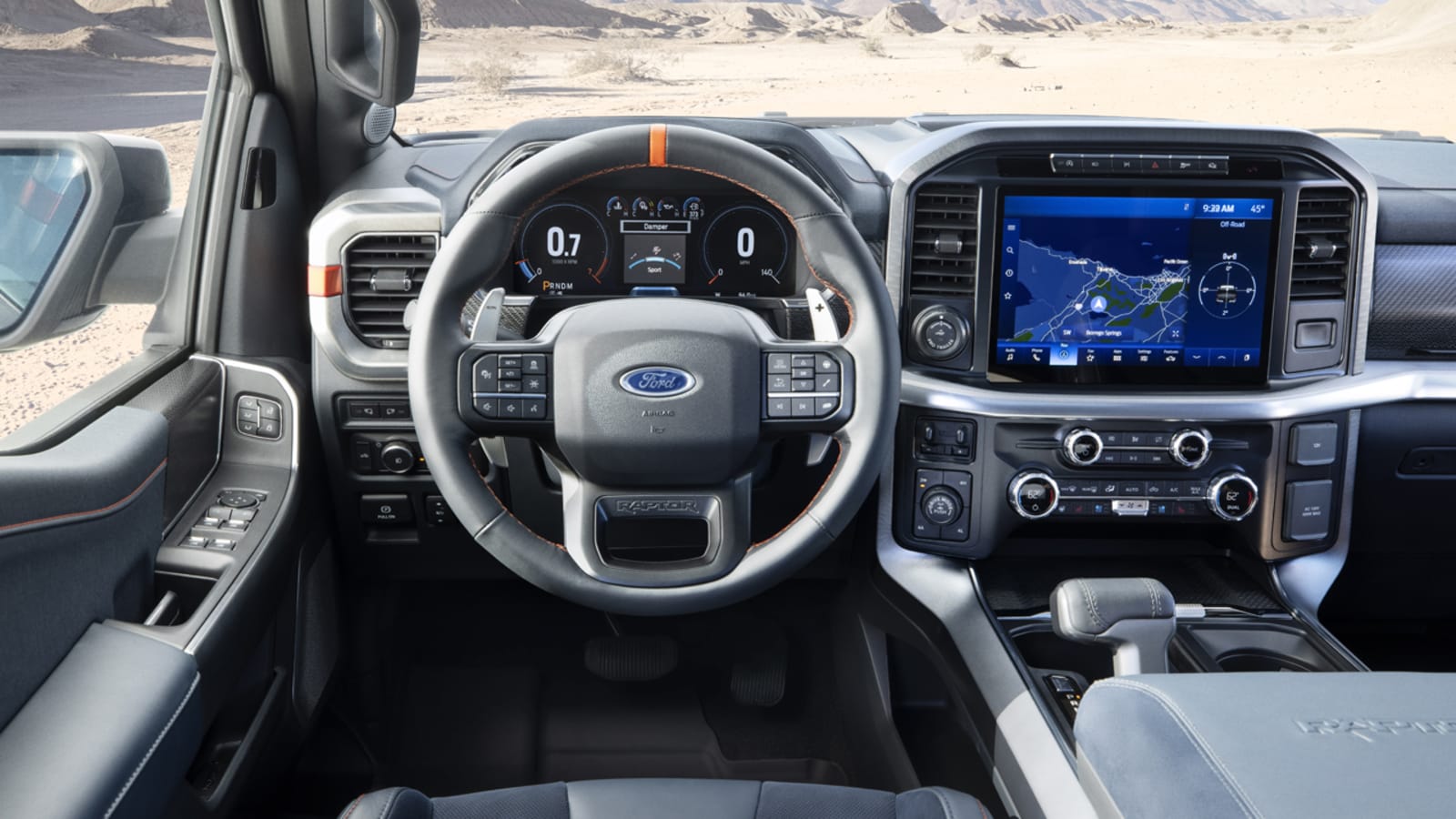 The trucks I drove were also equipped with familiar options like Ford’s tailgate step and a 360-degree camera system. They had optional Rigid fog and off-road driving lights, the latter factory pre-wired into position 1 in the overhead auxiliary switch panel. Each had the 2.0-kilowatt version of Pro Power Onboard (the higher 7.2 kW version is not available because this isn’t a hybrid.) You’ll see various graphics packages in the above photo galleries, but those can be omitted if you’re not into the whole sticker thing.

Ford Raptors are shipping now, and the base price is $65,840, including $1,695 in destination charges. That’s $7,705 more than last year’s crew cab, but there’s more standard equipment built into the new higher price. The 37-inch tire option is another $7,500, and with that you also get unique Recaro bucket seats and other trim differences. But there is a gotcha that makes the effective price really $13,650: 37-inch tires can only be ordered if you also take the $6,150 801A equipment package. That’s an attractive package that includes a lot of goodies like a Torsen front differential, Blue-Cruise prep, B&O premium audio, the 360-degree camera, the Tow Technology group and other bits and pieces. Personally, though, I’d rather take 801A on its own without the 37-inch rubber.

I’ve been a big fan of link-coil rear suspension in pickups ever since Ram came out with it, but I wasn’t prepared for how much off-road balance and poise it has given the Ford Raptor. It probably has to do with the fact that it’s a Raptor-only execution that is not found under all F-150s. That allowed engineers to really optimize it for the Raptor’s off-road mission, and it doesn’t take long to feel how it makes the chassis come alive and to appreciate how it can lay down all the power that the 3.5-liter EcoBoost can muster. The Raptor’s stock has risen significantly for 2021, but it's also hard not to think of how much higher it can go when Ford takes the wraps off the Raptor R next year.