There’s a mental checklist that requires a run through for every full-throttle application of the 2021 Dodge Charger SRT Hellcat Redeye.

Is the wheel straight? Cool, that one’s highly suggested. You’ll also want to take a peek at your traction control setting. The choices are "medium burnout" and "black out the sun" modes. Next, determine if there are members of law enforcement within sight or earshot. If they’re not already, the sound of a Hellcat accelerating is as good as a police dog whistle at this point. Lastly, are you paying very close attention? As approachable as Dodge makes 797 horsepower sent to the rear wheels feel, putting your foot all the way down is no elementary task. There will be counter steering required. You better be able to sense just when those meaty 305s are going to finally hook post spin cycle, too, because wherever you’re pointed, you won’t be traveling slowly.

Truthfully, the Charger Hellcat Redeye is a car that didn’t need to exist. Dodge’s 717-horsepower version of the Charger will already interminably smoke the rear tires for as long as your rubber budget will allow. Adding another 80 horsepower to the mix is more of a “because we can” decision — the parts were already sitting around thanks to the Challenger Hellcat Redeye — as opposed to a response to any actual consumer demand for more power. While some manufacturers trumpet EVs and set far-reaching emissions goals, Dodge plods on with a smirk. Heh, we put a bigger supercharger on this one.

But give the Redeye some credit. Sure, the supercharger increases from 2.4 liters to 2.7 liters in size, but the 6.2-liter V8 it’s attached to is more similar to the Demon than the standard Hellcat. That means it has strengthened connecting rods and pistons, a high-speed valvetrain, revised fuel injection system and a higher performing lubrication system. All these upgrades allow Dodge to increase boost pressure from 11.6 psi to 14.5 psi, and raise the redline from 6,200 rpm to 6,500 rpm.

Dodge even went to work on the eight-speed automatic transmission in the Redeye, fitting it with stronger internals. Plus, the torque converter is able to bump torque multiplication by 18% compared to the regular Hellcat. A stronger driveshaft and axles are fitted to allow the drivetrain to cope with the extra torque. Widebody-spec 20-inch x 11-inch wheels mounted to 305-section-width tires put the power down, and yes, it’s a 305-square setup. All-season tires are standard, but you’re going to want the optional, stickier three-season Pirelli P Zero rubber. Don’t even contemplate driving this car in the winter — it’s already a handful in light rain.

The only couple ways you’ll be able to tell the Redeye from the regular Hellcat from the exterior are in the badges and hood design. Dodge embeds a tiny red eye in the Hellcat logo on each fender — you really have to look closely, otherwise you’ll miss it. Strangely enough, Dodge doesn’t use the red eye in either the trunk or grille Hellcat badges. The hood is just a bit more aggressive than before with bigger openings and the aforementioned functional hood scoop. On the inside, the SRT Hellcat badge on the passenger side dash features the red eye treatment, but that’s it beyond some Redeye graphics in the screens. The rest is normal Hellcat fare, which means it’s sparse, simple and spacious. All your money is going toward what’s under the hood.

And that money is very well spent if you’re a horsepower fiend. Being able to smash the gas pedal at 45 mph and enthusiastically light the rear tires up is laugh-inducing every time. There’s a bit of give and take to that kind of an experience, though. You’re only ever able to fully and effectively get into the gas pedal when moving at speeds above 30 mph. Dodge’s built-in launch control system illustrates this car’s lack of grip and traction at low speeds best, as it feels like the car crawls off the line, scrambling and desperately searching for traction. We were unable to replicate Dodge’s claimed 3.6-second 0-60 mph time using the car’s onboard timer — that time likely requires a prepared drag strip and proper tire warmup, so don’t expect to match it on the street.

Where the Hellcat Redeye truly comes alive is from 30 mph up to however expensive of a ticket you want. Seriously, you won’t find any remotely legal speed where you drop the hammer and it doesn’t slam you back into the couch-like bucket seat. Dodge says it will max out at 203 mph, making it faster at V-max than any of the German super sedans that are significantly more expensive. That said, the biggest question that requires answering is this: Does it feel better and quicker than the non-Redeye?

Dodge’s numbers would suggest yes to the latter, but only barely. The official quarter mile time is 10.6 seconds at 129 mph, besting the standard Hellcat’s pass by 0.36 second and 4 mph. From the driver’s seat at road speeds, the difference is imperceptible. You’ll truly need to be at the drag strip or racetrack to reap the rewards of the Redeye. And yes, Dodge says the Redeye is quicker around a road course, besting the standard Charger Hellcat around its own 2.1-mile test track by 1.2 seconds.

The two biggest differences you’ll physically sense in the Redeye are its more aggressive shifts and a higher-volume to the supercharger whine. There’s an extra bit of violence to this revised transmission’s behavior in any drive mode. That makes it slightly more uncouth to pop around town in, but it’s also more engaging when you’re getting into it and frequently slapping up and down through gears. And the extra-loud supercharger whine only makes sense — it’s bigger! We love it.

Handling plays second fiddle to this 4,610-pound four-door, but it’s better than you might imagine. Dodge doesn’t do anything to upgrade the Redeye’s suspension, but the adjustable Bilstein adaptive dampers fitted on the regular Hellcat Widebody are more than capable of handling the task. They offer a supple enough ride in Auto to make for comfy highway cruising, but are able to stiffen the car up and sharpen reflexes dramatically in Sport and Track modes. Track is still too stiff for most public roads, but that’s why they call it Track. 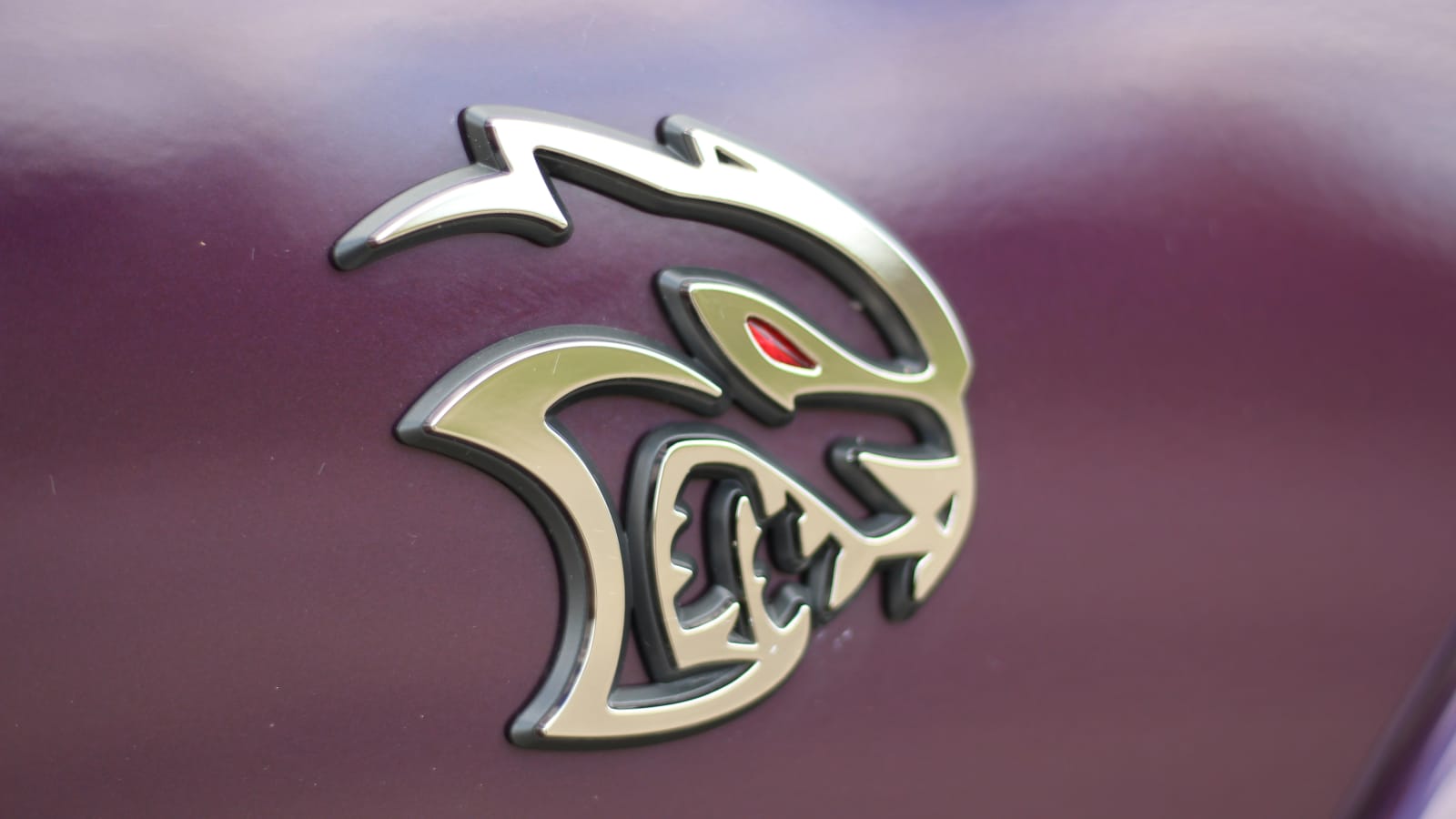 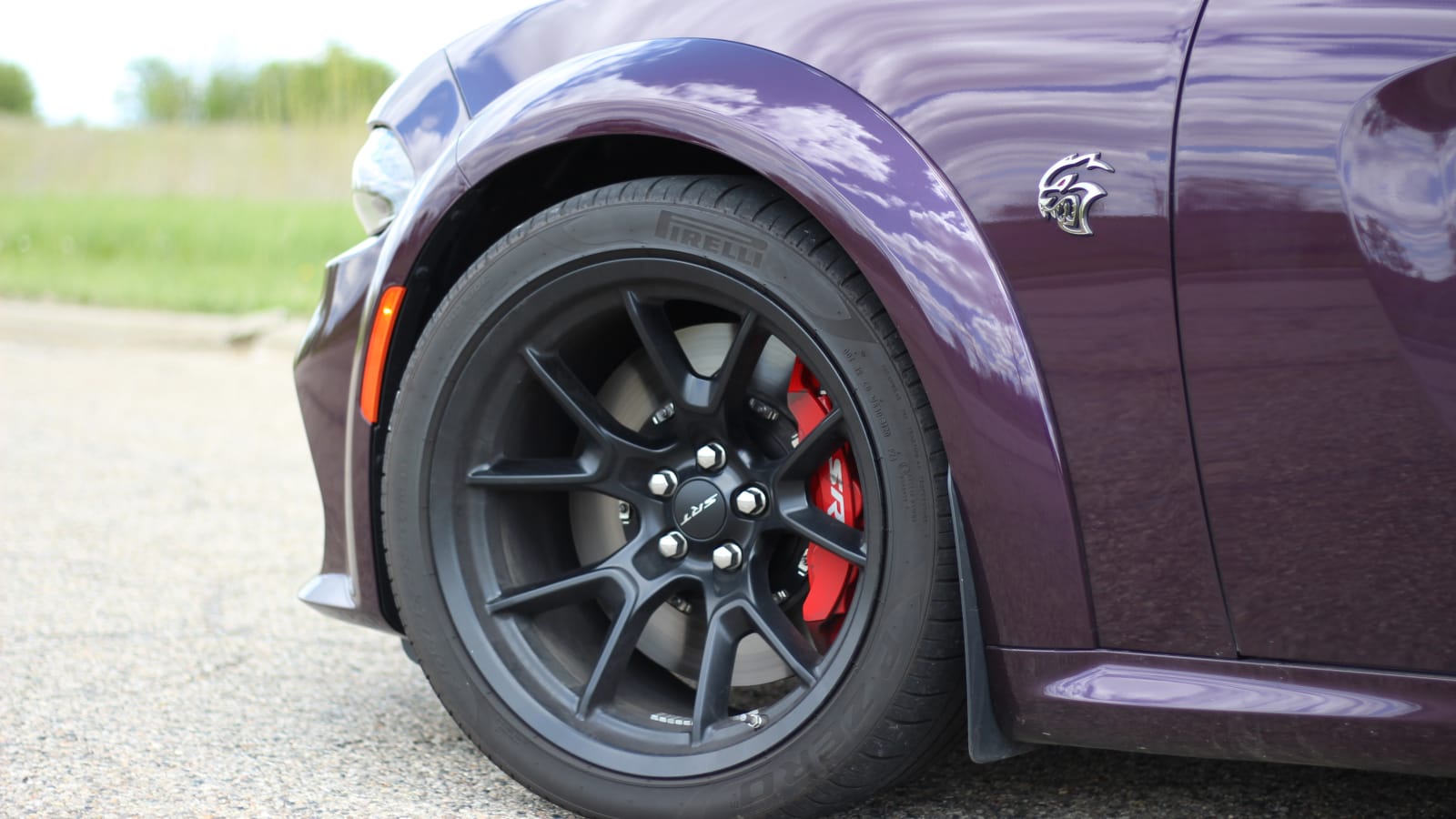 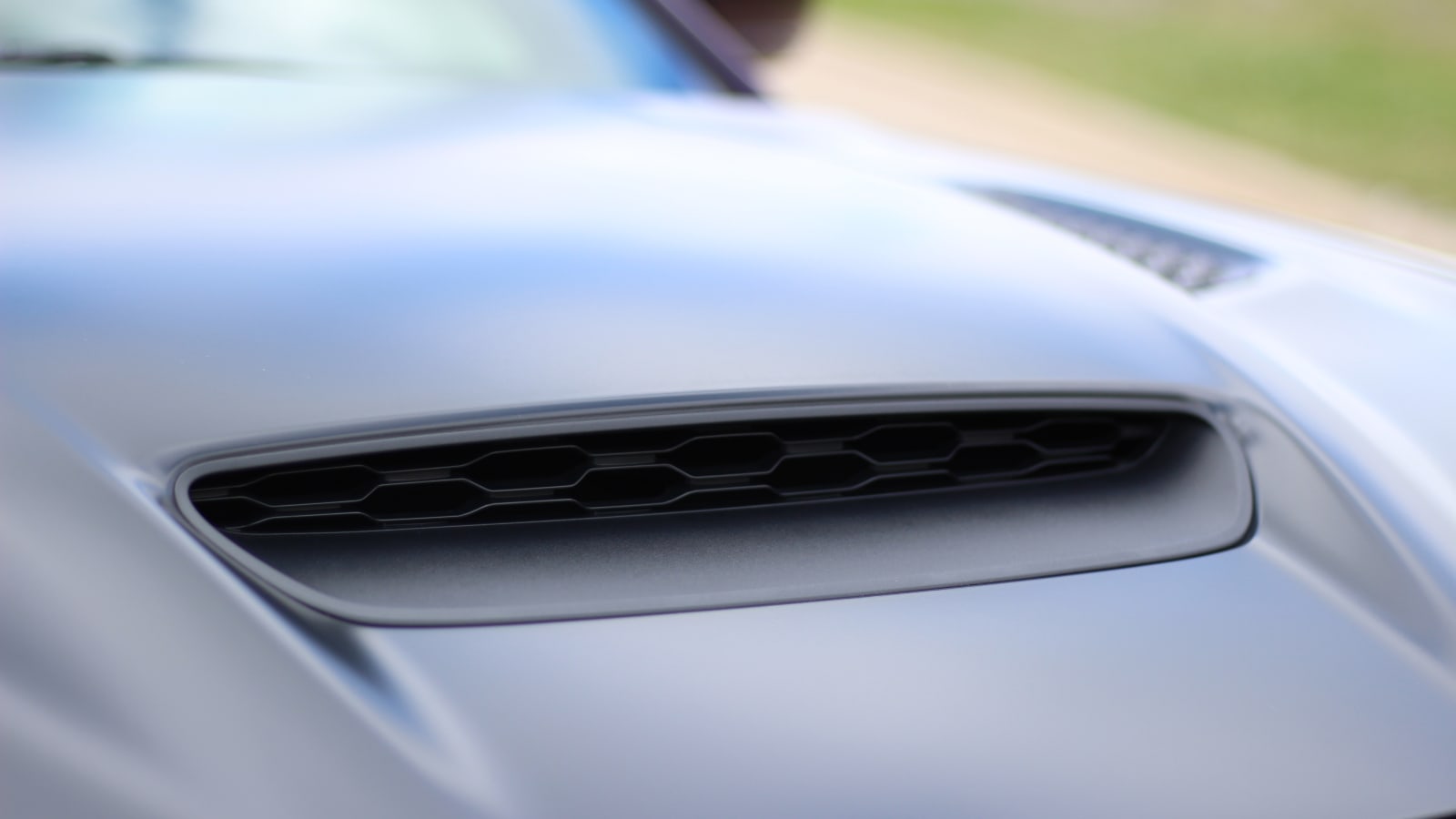 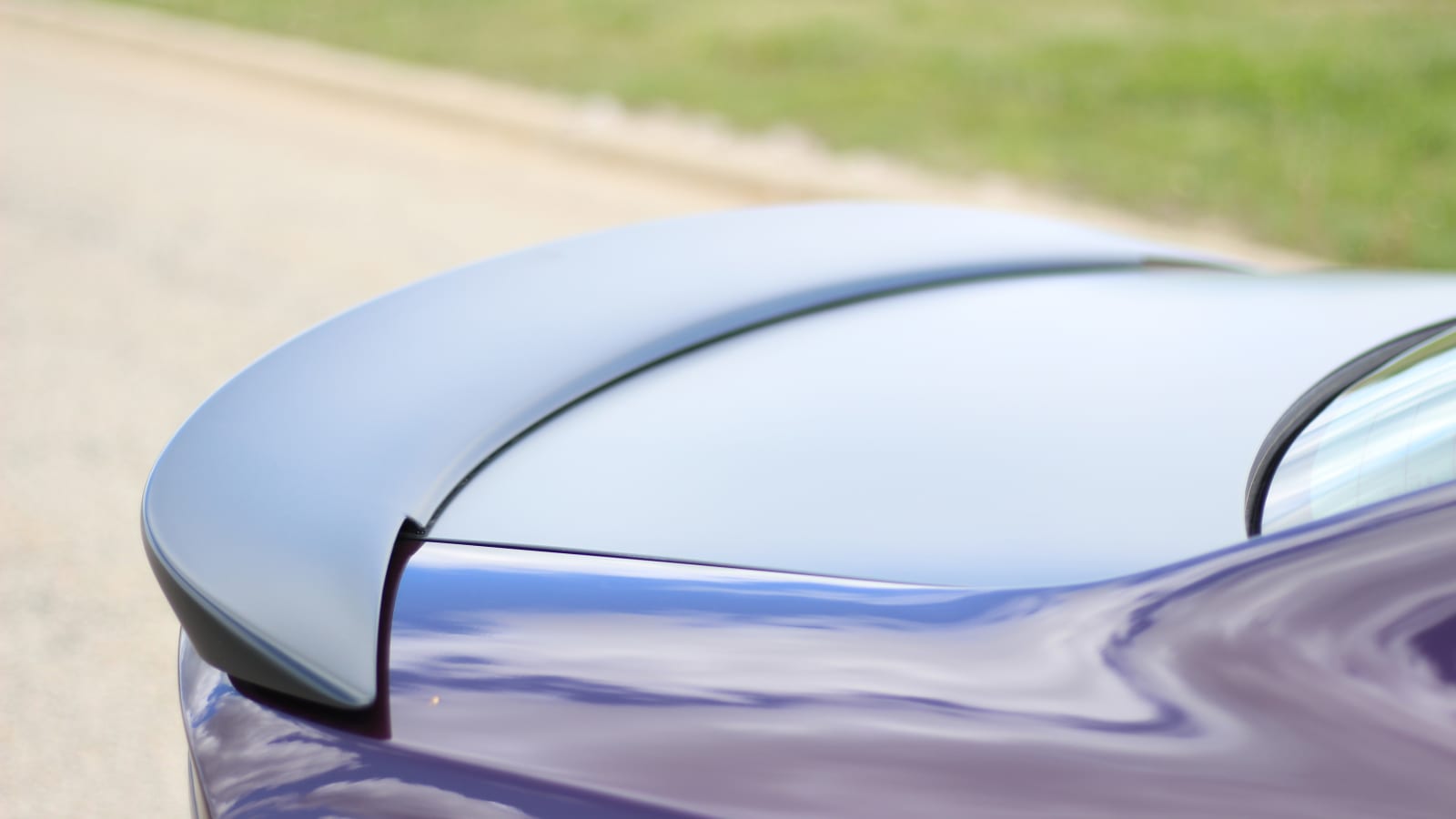 There’s an acclimation period to trusting this car’s grip through corners, but once you’re there, you realize that you can lean on and be confident that those massive 305 front tires will carry you through. The steering is surprisingly talkative, too, always letting you know what dips and road imperfections those tires are finding themselves in. Applying power coming out of corners requires yet another step of trust, because even if you leave traction control fully on, the Redeye will still try and get loose should you be a little early into the throttle on corner exit. Find that happy balance, and this car will truly shock at how excellent it handles.

The price premium on a Redeye over the standard Hellcat amounts to $8,600. Is the Redeye an $8,600 better experience than that base Hellcat Widebody? No, not unless you plan on frequent trips to the local drag strip and racetrack. If you are, the upgraded internals, drivetrain components and trick extra cooling capacity is well worth the extra change. And if your pocketbooks are bottomless, why not get the more powerful version? You can spec it out to be north of $90,000, like our $90,360 test car was — Hellraisin, as our tester was painted in, is highly recommended. Remember to budget for tires, too. A lot of them. And probably speeding tickets.

One thing’s for sure, no matter which you choose, you’re going to be laughing like a child every time you drive it. Like most SRT (and especially Hellcat-equipped) vehicles these days, this Redeye is one of the most obnoxious and fun-to-drive cars on the road. Get them while they last.