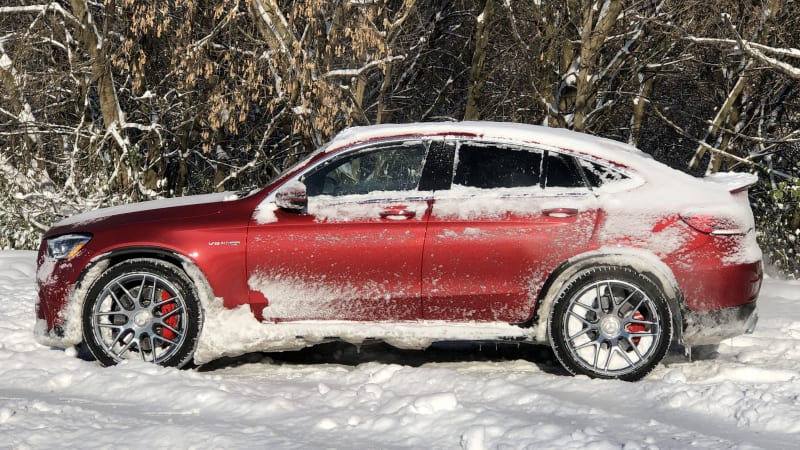 The 2020 Mercedes-AMG GLC 63 S Coupe isn’t a new model for Mercedes, but it did get a major upgrade in the new model year. Mercedes claimed it was the “fastest SUV around the Nurburgring” when it launched, but Audi now claims its RS Q8 is quicker by a full seven seconds. Still, the AMG did it in under eight minutes, which is bonkers for an SUV.

This time comes courtesy of a handcrafted 4.0-liter twin-turbo V8 making 503 horsepower and 516 pound-feet of torque. It’s not as powerful as the GLE 63 S with 603 horsepower, but we were hardly missing it on the way to 60 mph in just 3.6 seconds. Yowza, it’s fast. Since it’s an S, the top speed is 174 mph, as opposed to the 155 mph top speed of the non-S. Mercedes’ nine-speed multi-clutch transmission does the shifting, offering quicker response than a traditional torque converter automatic. Mercedes adopted the lightly refreshed 2020 GLC-Class Coupe styling in the full-on AMG model, and it also provided a big update to the tech. This car is running Mercedes’ newest MBUX infotainment system that debuted on the A-Class, a big improvement in speed and functionality over last year’s infotainment tech.

This being the “Coupe” version of the GLC 63 S, it also features less than optimal rear headroom and cargo space. The frumpy rear end gets a little leaner and more chiseled with the revised styling for 2020, but it’s still a strange looking vehicle. That rear spoiler that juts out and into the driver’s line of sight is even stranger to behold on the outside. On top of the reduced functionality, a GLC 63 S Coupe is more expensive than its traditional counterpart, but it’s also the only way to get the more powerful and more capable S. Ours started at $85,095, but options like the $2,250 21-inch forged AMG wheels, $1,100 head-up display, $1,080 designo Cardinal red paint and plenty of others took it up to $96,425.

Assistant Editor, Zac Palmer: Sometimes a tall, high performance crossover is exactly what you want. That happened to be the case during my time with this coupe-like SUV. Michigan dumped 11 inches of snow on us early this year, and our GLC 63 S Coupe was shod with Pirelli Scorpion winter rubber. Perfect.

As you might expect, it was an absolute riot. Mercedes lets you turn off stability control and slide around in circles for as long as you want. The 4Matic all-wheel drive system is happy to send huge power to the rear wheels whenever you ask for it, turning the SUV into something of a rally crossover. It's even playful with traction control off and stability control in sport mode. With the tall ride height and 503 horsepower waiting to be unleashed, this car laughed in the face of our winter storm. In most circumstances, this car doesn’t make a whole lot of sense with its limited utility and inferior-to-a-car handling. That changes when the weather gets really bad.

The GLC 63 S Coupe is a fine automobile to drive on dry roads, too. Try out launch control somewhere safe with a lot of empty road in front of you. It’s mind-bending how quickly this beast gets up to speed. Since our car was equipped with winter tires, it wasn’t the grippiest around corners, but the chassis is still superb. The suspension stiffness is controllable via the various mode selectors throughout the car — it’s remarkable how livable the suspension is in Comfort mode, and it’s not especially horrible in Sport+ either. Mercedes’ nine-speed dual-clutch transmission works well when you’re up to speed, but low-speed maneuvers were a nightmare of choppiness. It’s an acceptable level of un-smoothness for a sports car, but it jerks you around far too much for a luxury crossover. I’d happily give up a smidgen of track performance for easier around town driving in this thing.

This Mercedes-AMG GLC 63 S Coupe was absolute perfection in the snow assault of the past couple days. Winter rubber, 503 horsepower and heavily rear-biased all-wheel drive is as fun as it sounds in the fluffy stuff. @therealautoblog pic.twitter.com/3HSme7vmFK

Associate Editor, Joel Stocksdale: Like Zac, I was genuinely impressed with the ride and handling balance of the GLC 63 S. It feels surprisingly nimble, but isn't punishing. I think I still prefer the Alfa Romeo Stelvio Quadrifoglio more, but the Merc is still excellent.

That being said, we've so far glossed over the show piece of this AMG: its twin-turbo 4.0-liter V8. At 503 horsepower this is, and it's strange to say this, one of the less powerful versions of the AMG engine. It still packs a wallop that will have you hurtling past the speed limit quite easily. Power comes on impressively smoothly, though, so it's easy to keep it under control.

As good as the power is, the sound is even better. The GLC 63 S has a dual-mode exhaust that is quiet as a mouse when you want it to be, but press a button and it starts making evil grumbles and gurgles. Romp on it, and each shift comes with a fierce bark, and letting off returns a series of rippling cracks. I left it in this mode not just because the sounds make me giggle, but because the volume and tone was still pleasant in daily driving. It never got painfully loud, and the exhaust note didn't drone. This is one car you can be loud all the time and not get tired of it.