The numbers make you shake your head. Possibly laugh. They definitely get your attention. The 2020 Ford F-Series Super Duty, be it the F-250 or F-350, can be optioned with a revised version of the 6.7-liter PowerStroke V8 diesel engine that now produces a best-in-class 475 horsepower and, wait for it, 1,050 pound-feet of torque. It's not the first time a heavy duty truck's torque figure has required a comma, but it is the first time such a prolific stump puller has been the only diesel engine offered. The Ram's 1,000-lb-ft diesel inline-six is exclusive to the 3500; a lesser version is offered on 2500. GM's heavy-duty diesel is available on both 2500 and 3500 trucks, but it pumps out 910 lb-ft. Chevy and GMC have said they're more interested in real-world performance than a constant state of spec sheet one-upsmanship, but dude, that's a 140-lb-ft deficit. People are going to notice that.

Crossing the 1,000-hp threshold requires a new turbocharger, piston heads, fuel system and fuel-saving variable displacement oil pump, plus strengthened cylinder head, block, connecting rods and bearings. Strengthening things does seem like a good idea with 1,050 torques, which you absolutely cannot miss when you lay into the throttle. With the bed empty and the hitch unhitched, the F-250 King Ranch we start the day in slowly moves away then explodes forth as the boost kicks in with a silky, effortless thrust that's almost indicative of a high-powered, turbocharged luxury sedan. If the numbers don't make you laugh, the acceleration will.

And when the bed is full of a fifth-wheel hitch attached to a 12,000-pound trailer (admittedly small beans for a truck capable in diesel-only F-450 guise of lugging 32,500 with a fifth-wheel), it gives new meaning to the overused cliché of "it's like the trailer's not even there." Well, you do notice it's there – it's an engine, not magic – but accelerating up a 6-degree grade sure was uneventful regardless of whether we were towing a comparable amount in the F-450 or the aforementioned F-250 King Ranch. Not much noise, not much fuss. In fact, the biggest challenge is not getting up to speed too fast and finding yourself blitzing into a corner just around the same time you remember that you're traveling in 19,000 pounds of truck and trailer. 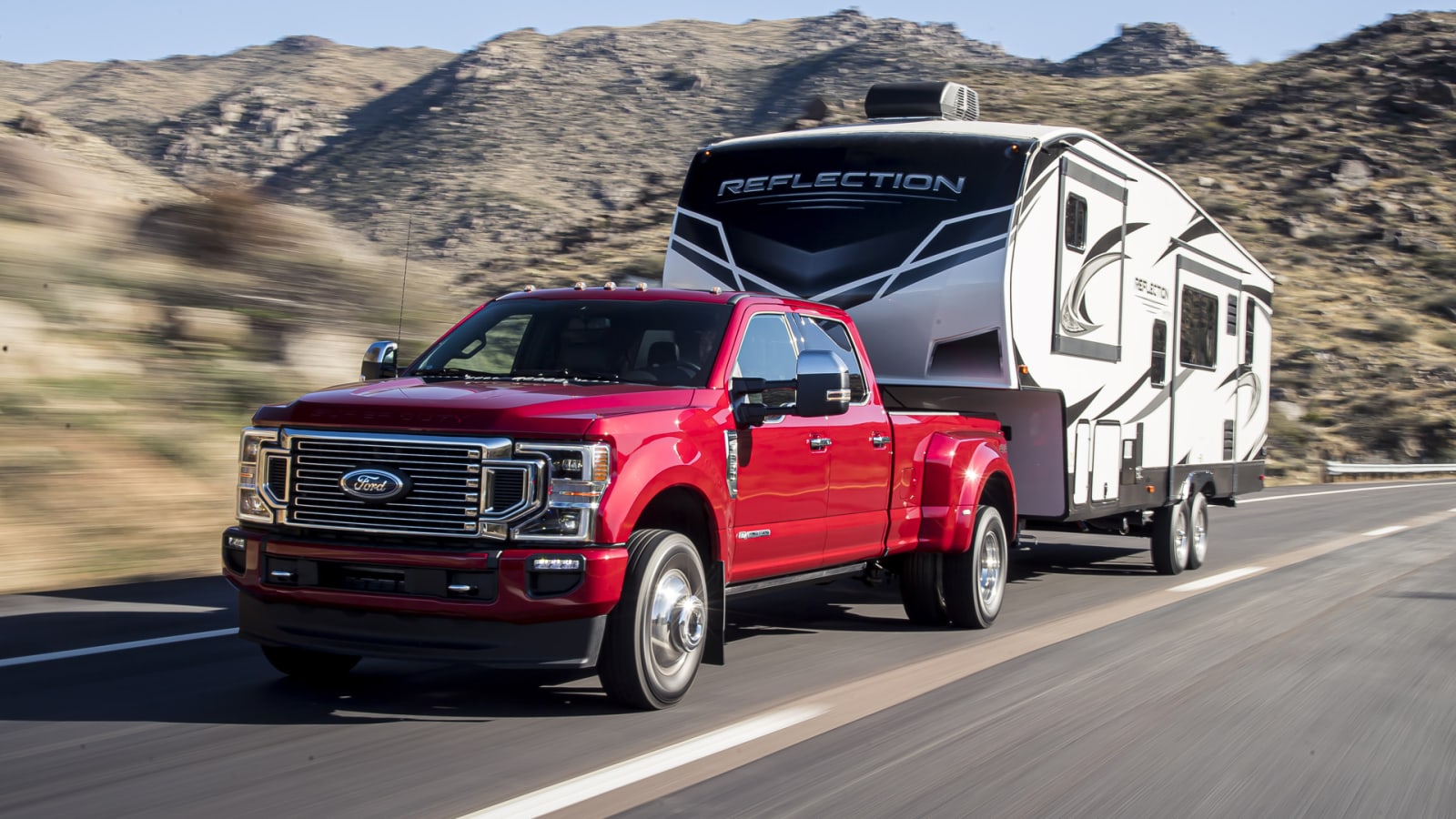 There’s also an optional gas V8, an all-new powerplant that can’t match the PowerStroke’s torque figure but weighs in at a monumental, anachronistic 7.3 liters. That totally unexpected figure, in this era of downsizing and turbocharging, results in 430 hp and 475 lb-ft of torque. According to engineer Patrick Hurtrich, the no-replacement-for-displacement approach is a better one for assuring fuel economy in a truck destined for towing, as doing so with a turbocharged engine such as the F-150's 3.5-liter EcoBoost negates or eliminates the usual efficiency benefits.

The new 7.3 significantly betters the 385 hp and 430 lb-ft of the old 6.2-liter gas V8, which continues on as a base engine. It also smacks down the GM (401 hp, 464 lb-ft) and Ram (410 hp, 429 lb-ft) engines both in terms of output and towing figures. Sadly, our test of the Silverado HD and its gas V8 was done at a higher altitude and with a heavier trailer, so we can't offer much in the way of a fair comparison. Nevertheless, when towing something in the 9,000-pound range, the gas-powered F-250 impressed with its ability to tackle the same grade. It wasn't as effortless as the PowerStroke, but it never came close to being strained, and it even provides a really cool V8 snarl that's more muscle car than roaring, uncouth work truck. It also comes with a surcharge of $1,705 versus the PowerStroke's hefty $10,495 price tag.

Of course, fuel cost must be considered, and the PowerStroke’s observed 19 mpg average is significant compared to the F-250 7.3’s range of 14 to 15 mpg – 35% better, in fact. The EPA doesn't require fuel economy estimates for heavy duty trucks, so we're afraid those are our best numbers for now.

Both the 7.3 and PowerStroke engines are paired exclusively to an equally new, heavily fortified derivation of Ford's existing 10-speed automatic transmission (only 7% of parts are shared). Much as GM's 10-speed does, this new Ford "TorqShift" transmission manages to further amplify the towing experience as more gears means more opportunities for the engine to stay in its sweet spot when towing – be it accelerating, maintaining speed or engine braking – reducing the chances of sitting in a truck as the engine blares in distress. It's good for performance, it's good for fuel economy, it's good for in-cabin serenity, and it shifted flawlessly during our drive. 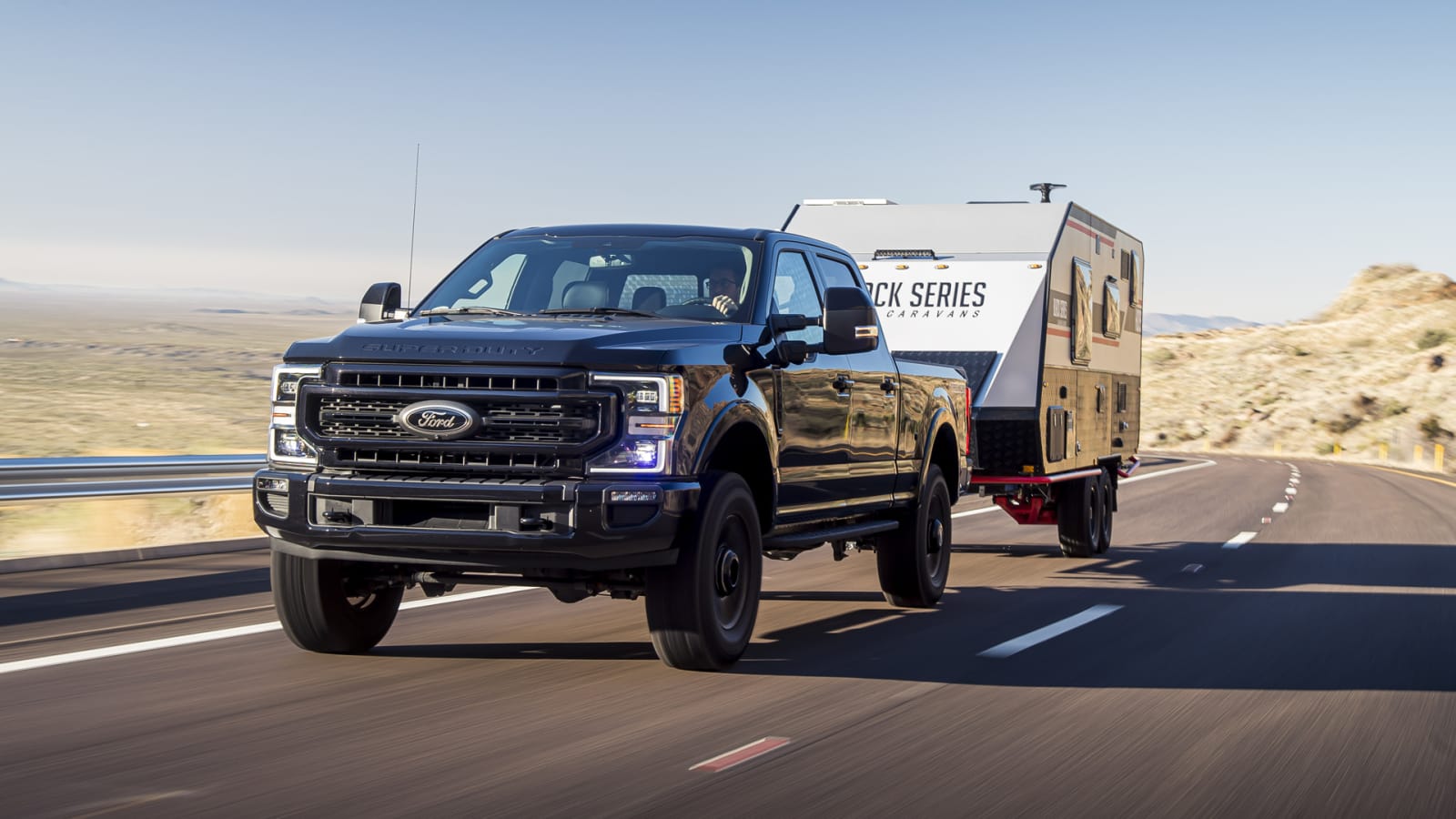 For your peace of mind, we highly recommend checking the $1,000 adaptive steering option box. Every F-Series Super Duty from the XLT upwards has electrically powered hydraulic steering (a necessity for the standard lane-keeping assist system), which is reassuringly firm when turning, but too numb and unnerving on center. The numb bit is typical of heavy-duty trucks as engineers must find a compromise so that the steering can respond similarly when empty and when weight is crushing down on the back end when laden. The optional adaptive system basically alters itself so that steering effort and response can be reassuringly consistent regardless of situation.

That said, the Tremor off-road package (pictured above) and its 18-inch black matte wheels wrapped in 35-inch all-terrain tires render most of the positive attributes of the adaptive steering system moot. As all-terrain tires are apt to do, steering precision and feel are reduced considerably. The adaptive steering system is still a good idea, though, as an F-250 XLT Tremor without the system was a bit nerve-racking when making the meandering turns of that 6-degree incline. It was actually worse in a straight line. By comparison, that big red F-450 pictured above that was attached to more weight with regular tires and the adaptive system resulted the steering equivalent of "it's like the trailer's not even there." As such, we'd recommend test drives of various configurations, especially if you've got eyes on the new Tremor off-road package.

It's understandable, as it certainly looks cooler with those tires/wheels and boasts a significant number of off-road-oriented upgrades we've discussed previously in detail. They collectively allowed us to tackle some pretty significant off-road events during our first drive and in general, the Tremor makes for a compelling answer to the Ram's off-road 2500-class pickup, the Power Wagon. While the Tremor can't match the Ram's 4 extra inches of ground clearance or disconnecting sway bars that allow for superior wheel articulation, it is available in a much wider array of configurations. You can attach it to either F-250 or F-350 models, the XLT, Lariat, King Ranch or Platinum trim levels, and with either the 7.3-liter or PowerStroke engines. By contrast, the PowerWagon is 2500 only, a single special trim level and gas V8 only. There is currently no GM answer to these off-roading models. 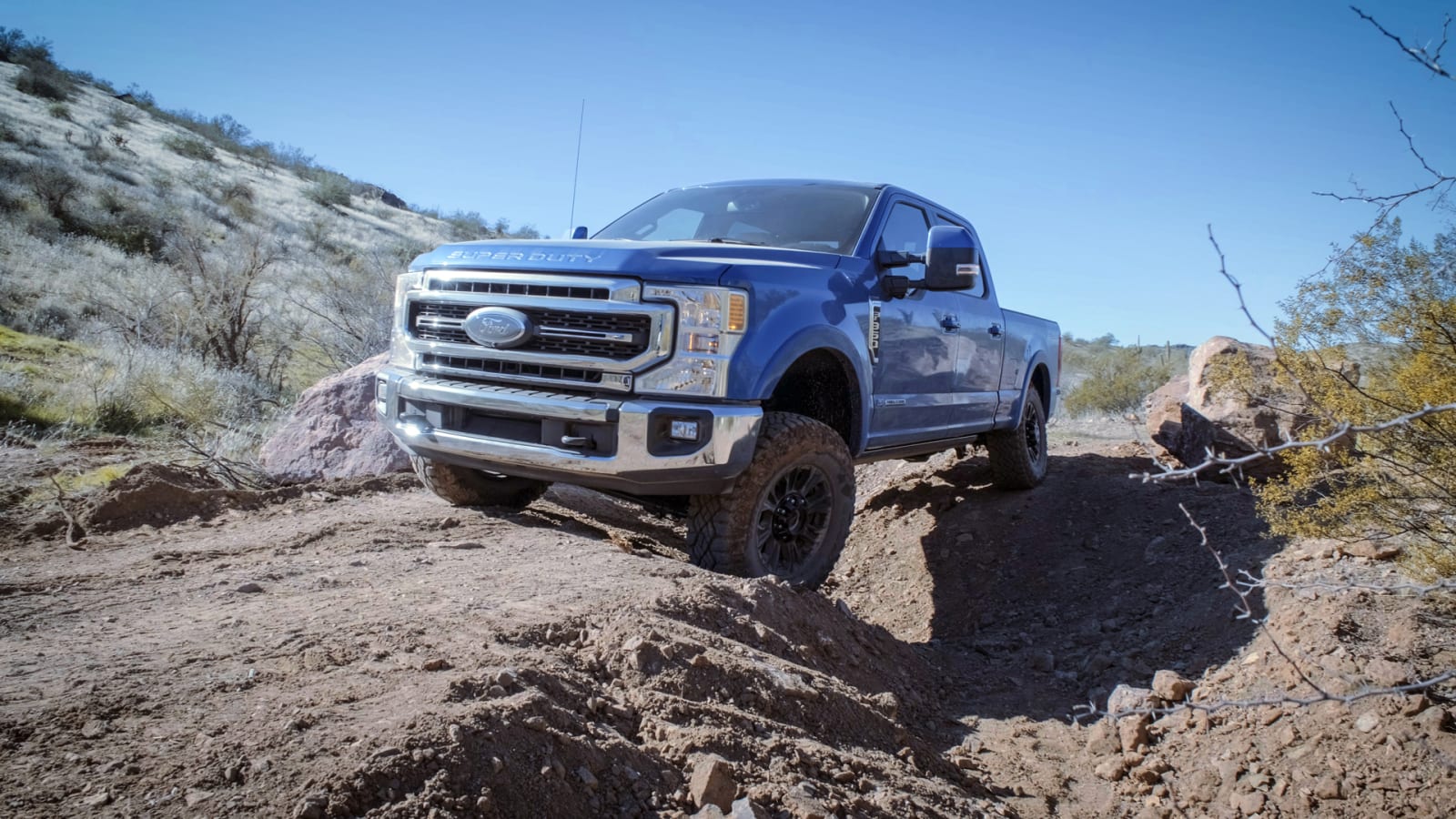 Changes for the Super Duty don't stop under the hood. The grille is new, and in a move that's perhaps shocking, there's less chrome. It's a subtle update, but it looks good and downright classy in comparison to Chevy's avert-your-eyes Silverado HD. The bumper and headlight cluster are also new (note the C-shaped LED lighting element), while the rear relocates the Ford oval to more prominently feature "Super Duty" embossed within a concave tailgate that's reminiscent of much older, boxier Ford trucks of yore. Again, there's less visual clutter and it's successful. Even the high-dollar King Ranch, Platinum and Limited trims don't rate high on the garish meter.

That goes for the interior as well. The design is the same, which is OK. It's not quite as glitzy, richly appointed or cleverly functional as the Ram trucks, but every Super Duty outshines its drab and unimaginative GM counterparts. For 2020, all trims but the XL come standard with the 8-inch Sync 3 touchscreen, while wireless charging is standard on the three luxury trims and optional on Lariat. (You can find a full breakdown of features and pricing for F-250 and F-350 here on Autoblog). Forward collision warning and automatic emergency braking, lane-departure warning and blind-spot warning are optional on even the base XL now and are standard on every other trim. Adaptive cruise control is optional on Lariat and King Ranch, and standard on Platinum and Limited. By comparison, such tech is optional on every Ram trim and only optional on the priciest two Silverado trims.

Admittedly, counting driving tech doo-dads is less sexy than listing eye-popping mechanical numbers, so let's end with some more of those, shall we? The Super Duty boasts best-in-class gooseneck (37,000 lbs), fifth-wheel (32,500) and conventional towing numbers (24,200) along with best-in-class maximum payload (7,850). The same applies when you break down those same elements within the entire diesel-powered 250/2500 and gas-powered 350/3500 segments. The gas-powered Ram 2500 and high-output diesel 3500 aces the equivalent Super Duty in a few categories. So yes, even 1,050 pound-feet isn't enough to make it king of every hill, but it sure makes it easier when climbing up it. 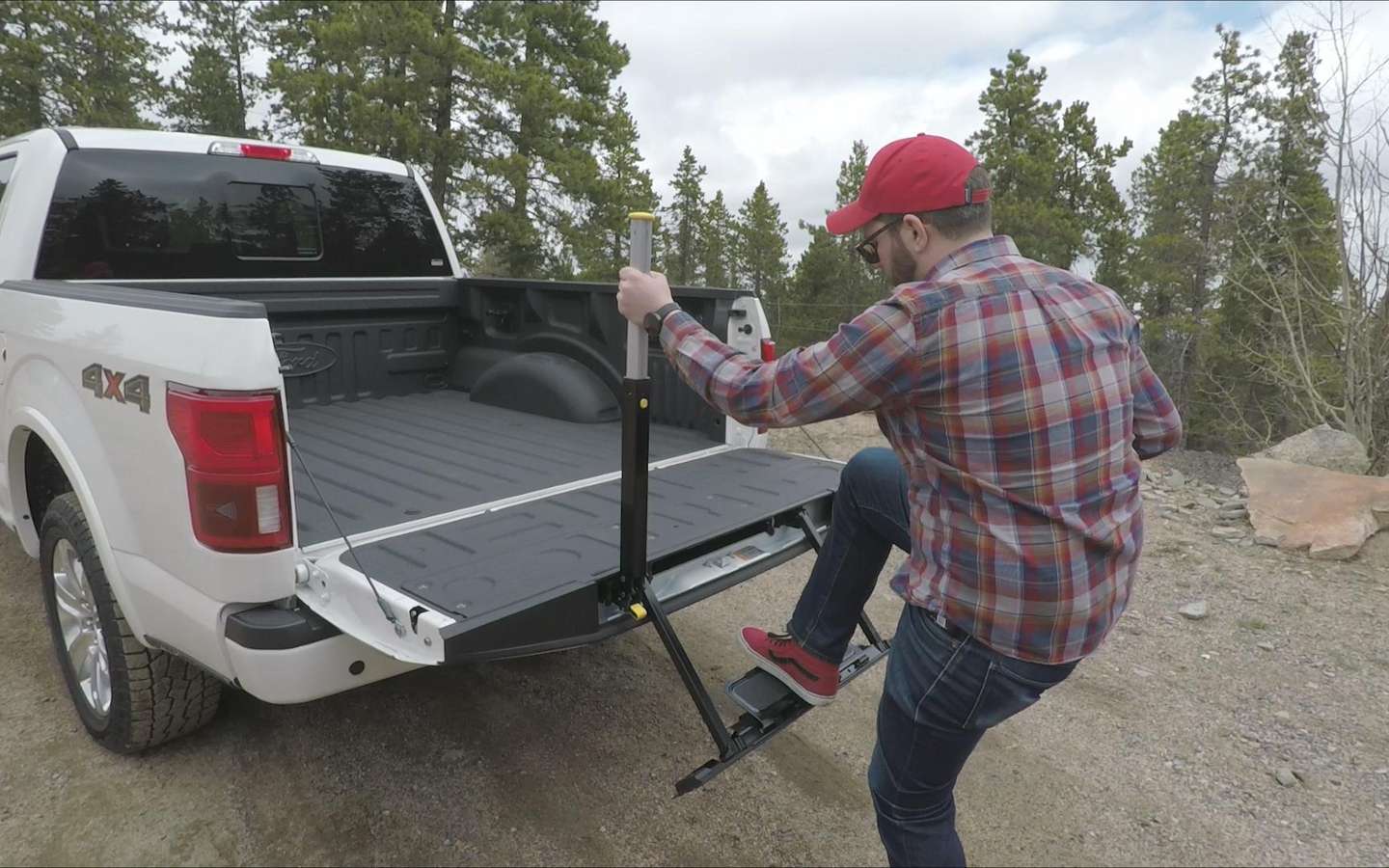