LAS VEGAS — Let’s forget for a moment that there’s ever been a Corvette. That there are no expectations for where the engine should be, the type of suspension used, the quality of the interior or the type of people who stereotypically buy one. It’s within this vacuum we’re going to consider the 2020 Corvette Stingray as it pulls up resplendent in highlighter yellow, its seat belts and interior stitching to match. Smartphone cameras come out, necks crane, people notice, and in a place where such things are important no less: the valet stand at the Cosmopolitan, the classiest and coolest hotel on the Strip. For a high-priced sports car to truly succeed, even if it’s relatively low-priced for its capabilities, drawing such attention from outside the car enthusiast community is vital. This is where the Porsche 911 transcends, attracting enthusiasts drawn to its specs and track prowess, while also luring luxury buyers for its style, the Porsche badge and simply the way it makes them feel. This is the standard for the 2020 Corvette.

The C8 makes it easy to consider it with such a blank slate. This really is an entirely different car than the one it replaces for reasons beyond its engine placement and coil-over shocks in lieu of transverse leafs. Sliding into the snug seat dropped to the floor, the view ahead is filled with pavement rather than hood; the view behind is atrocious, filled with glare, bodywork and the 6.2-liter V8 displayed like a showpiece through 3.2 mm of glass. Firing it up is less histrionic than you might expect given its size and position just behind your ear, and the push-rod engine settles into a distinctive tick-tick-ticking at low RPM that you couldn’t hear if it were mounted forward of your toes.

The interior surrounding you, and I do mean surround, is unlike anything on sale today or ever. It makes a bold statement that this car is different, special and will be remembered. The sail panel rimmed with climate buttons rises from far aft on the center console to greet an 8-inch touchscreen aggressively angled toward the driver. A thoughtful wrist rest sits below allowing you to fix your hand in place when using the touchscreen while also concealing the rotary drive mode selector below. For the driver, the overall design is brilliantly encompassing and brings full meaning to the word cockpit. For the passenger, you feel like you’re in a sidecar. At least it's a nicely adorned sidecar, as most surfaces are covered in either leather or a convincing substitute depending on trim level. The plastics are acceptable for a price range north of $60,000, and Chevy says that if something looks metal, it is metal. Colorful interior options ensure a degree of customization that's a must in the high-priced automotive bauble stratosphere. 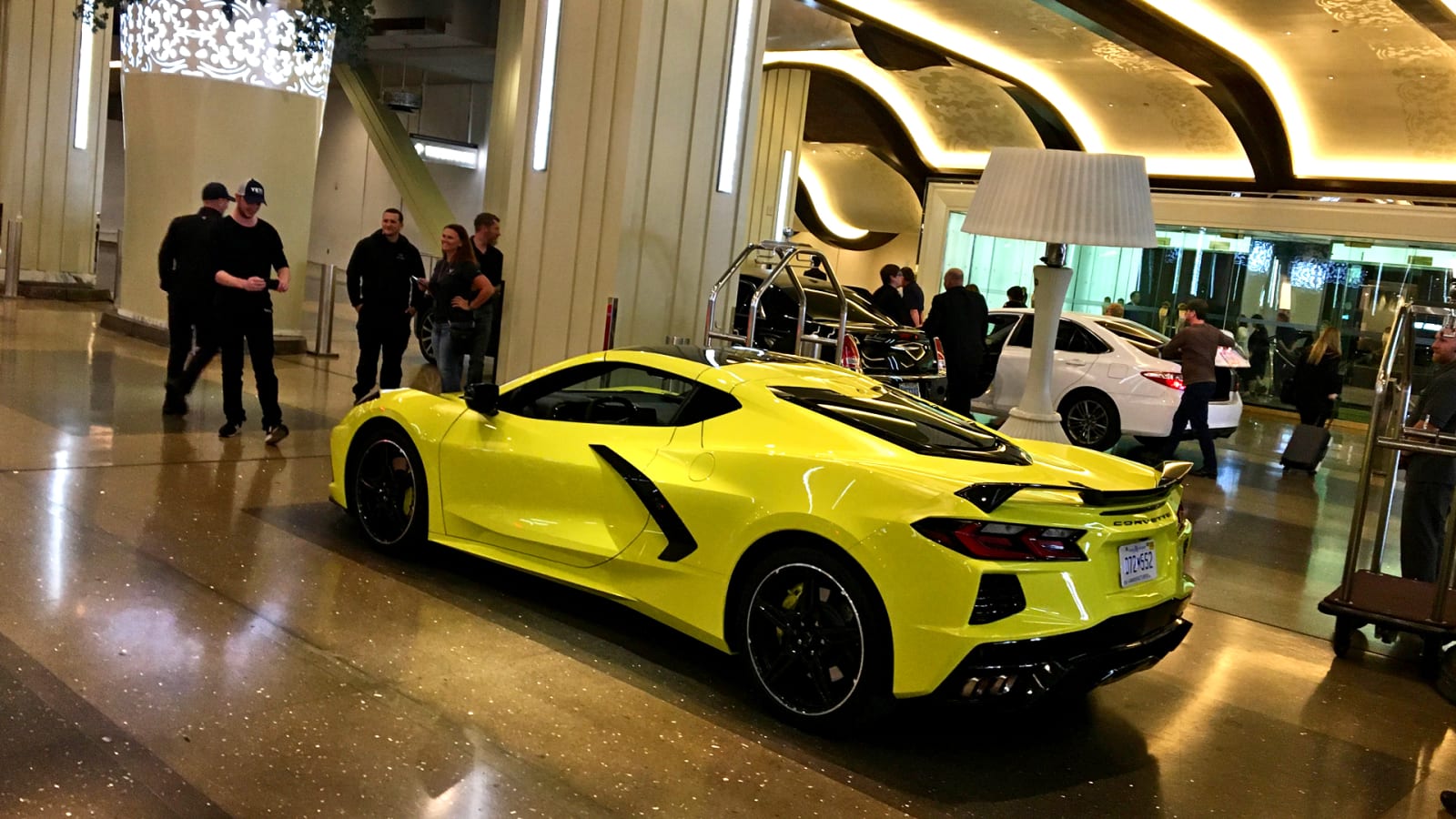 Pulling away from the Cosmopolitan, several significant bumps prove the value of GM’s latest iteration of its magnetically controlled adaptive suspension (FE4 in Chevy code speak). There’s much to be said about its ability to constantly adjust itself and firm up around a track, but it’s the suppleness it shows around town and on the freeway that makes it worth every penny. That, plus the pleasantly weighted steering, minimal noise and brilliantly smooth new eight-speed dual-clutch gearbox that blurs through shifts in easy driving like a regular automatic, makes the C8 a kitten to drive. Looking for a weekend toy that can actually go places? This can be it. Two functional trunks help on that front, too.

Putting a small block V8 in a mid-engined car is unusual when every other car with such a layout is turbocharged, revs to a screaming limit or is a hybrid. For the Corvette faithful, this is a must. In our vacuum, it’s characterful and provides requisite uniqueness. Boasting 495 horsepower and 470 pound-feet of torque with the optional Z51 track package's performance exhaust (490 hp and 465 lb-ft standard), the new LT2 engine is derived from the old LT1. Though it has old-school pushrods, it also has new-school variable valve timing, direct injection, cylinder deactivation and a standard dry-sump oil system that defies the laws of physics by keeping the engine sufficiently lubricated up to 1.25 lateral g.

With so much torque on hand, there’s enough low-end grunt that you’re planted in your seat and shifting isn’t frequent, but as it reaches its peak at 5,150 rpm, it doesn't arrive with the same immediacy as a turbocharger or electricity provide. On the other hand, throttle response is exceptional, a credit to natural aspiration. It all comes with a deep, guttural warble (admittedly “accentuated” by speakers) and a dual-mode performance exhaust that's far more noticeable outside than in – good thing the removable roof panel is standard. 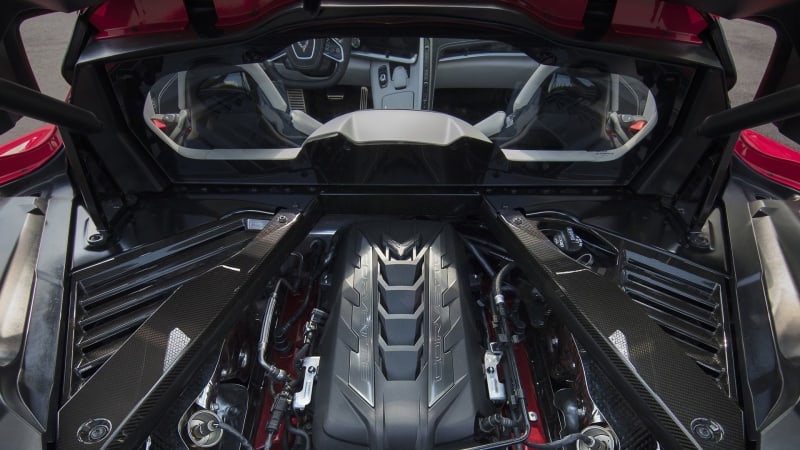 The C8’s steering lacks the fingertip delicacy and communication of the similarly priced and mid-engined Porsche 718 Cayman, but the rack-mounted EPS is consistently weighted and precise. It's also quicker than before (a ratio of 15.1:1 versus 16.25). You’re closer to the front wheels in a mid-engined car, and true to form, you can feel the C8 tuck neatly into turns at your feet while the rest of the car pivots around your backside. The steering wheel itself has drawn guffaws for its goofy shape, but its diameter is tiny and its unique shape satisfies the goal of providing leg clearance and maintaining an unencumbered view of the instruments and the road ahead.

The guffaws should really be directed at the downward-pointing spokes that oddly meet your hands at 4 and 8 o’clock. After several laps of the Spring Mountain Motorsports Park track, my right wrist began to ache from repeatedly moving in an atypical way. Moving up to the usual 3 and 9 alleviated this, but there are no grips there.

Through the constant radius sweepers of Spring Mountain, the 2020 Corvette demonstrated its superb balance and ably allows you to set your steering angle and manage the car's trajectory with the sharp throttle. Grip is plentiful, but unlike a high-powered, front-engined sports car, it doesn’t feel like the admittedly fat 305/30ZR20 rear tires are doing most of the work keeping you right way round. It feels more natural and balanced, the result of having 60% of the car’s weight over the rear axle. 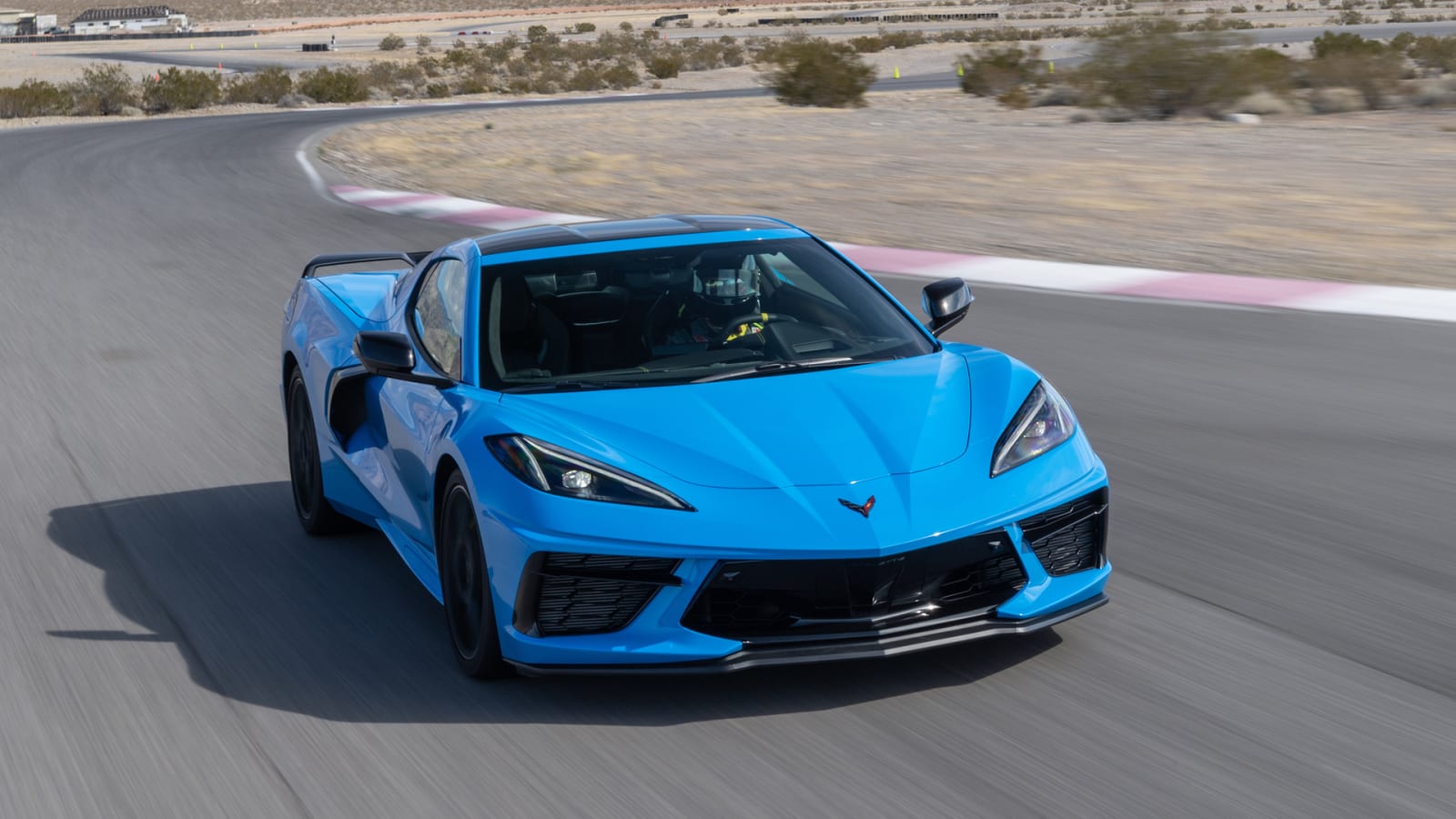 The Corvette Stingray we drive at Spring Mountain, pictured above, is equipped with the Z51 track package. It adds an electronic limited-slip differential, larger Brembo brakes with four-piston monobloc calipers, enhanced cooling, Michelin Pilot Sport 4S tires, a specific axle ratio, the performance exhaust, front splitter and two-piece rear spoiler that together add up to 400 pounds of downforce, and the track-tuned FE3 suspension (the base is FE1 and there is no FE2) that alters the springs, sway bars, dampers and electronic calibrations. You can enhance all of that with the optional $1,895 FE4 magnetic suspension, a bigger wing and a pair of upgraded seats. While we didn't get a chance to try the $1,495 mid-grade GT2 seats, we'd recommend trying out the $1,995 top-of-the-line Competition Sport seats before placing your order — both of your Autoblog test drivers are on the slender side and found the seat bottom uncomfortably pinchy. The standard GT1 seats (pictured below) were fine in that regard and still provide adjustable side bolsters that kept us sufficiently in place on the track. The low roof and roll structure also caused headroom issues for this pair of 6-foot-plus drivers, especially with helmets on the track.

Much has been made that the C8 is not available with a traditional manual transmission, but it doesn’t have a traditional automatic, either. Frankly, both would be out of place in what is effectively a mid-engine supercar capable of blitzing from zero to 60 in 2.9 seconds. On the track, the new eight-speed dual-clutch automated manual developed by GM and Tremec is smart enough to shift at the right time most of the time, but there were nevertheless a few odd downshift choices and moments when pulling a paddle was needed. That virtually never happens when using the most aggressive settings of Porsche PDK or Mercedes AMG’s automated manual, but this is a critique concerning degrees of excellence. GM and Tremec should be applauded for their effort.

So too should the Z51 package’s fat Brembo brakes that took lap after lap of pounding while maintaining their reassuring pedal feel. That pedal itself is also nicely placed for left-foot braking, which can’t be said for Porsche’s. 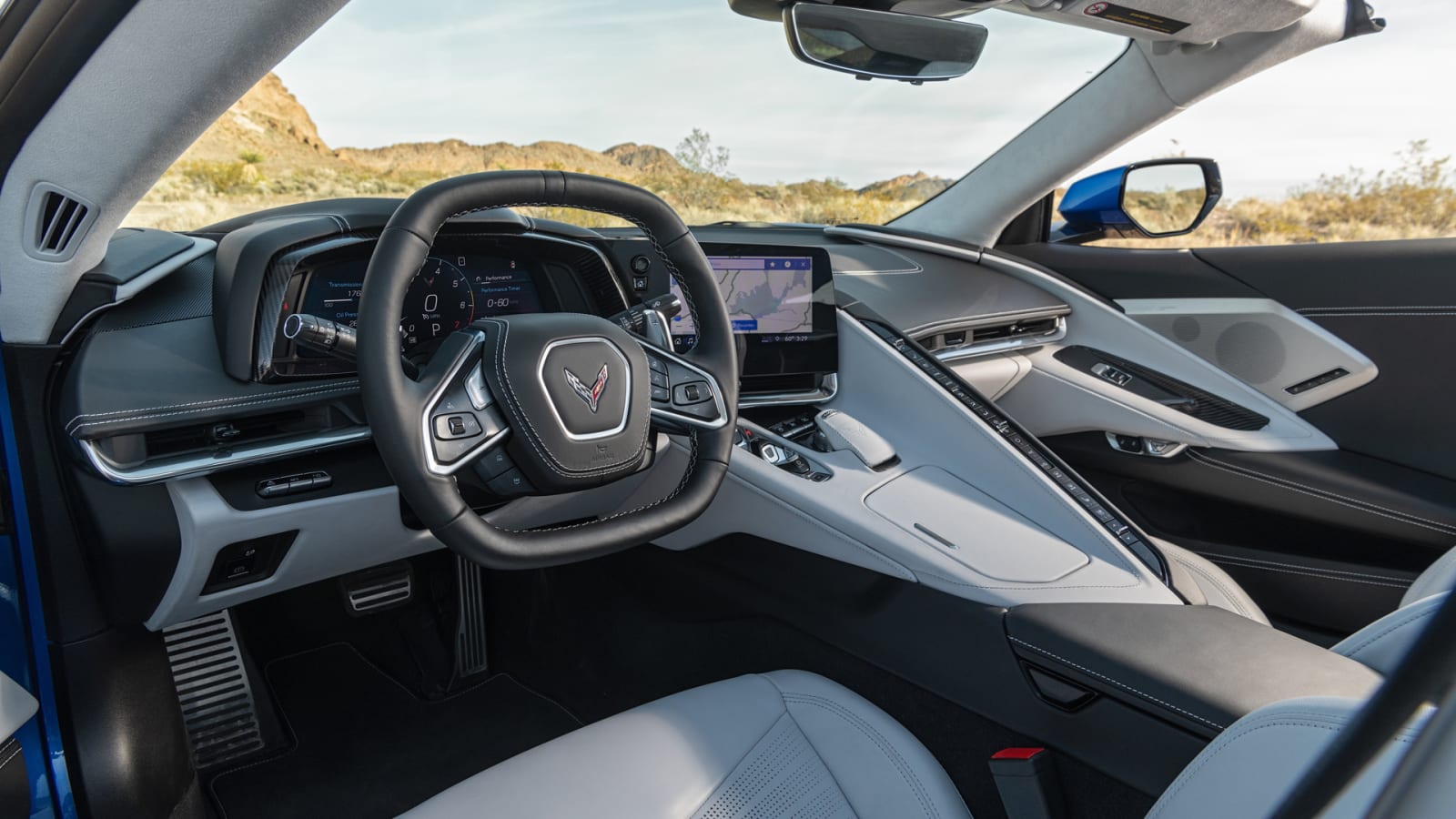 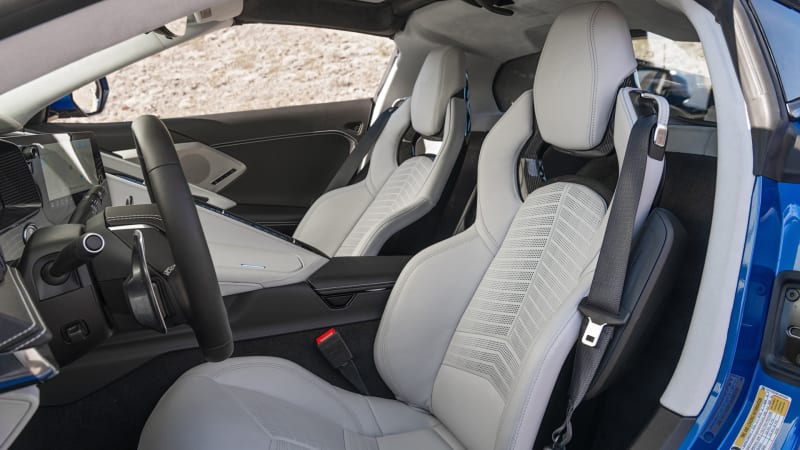 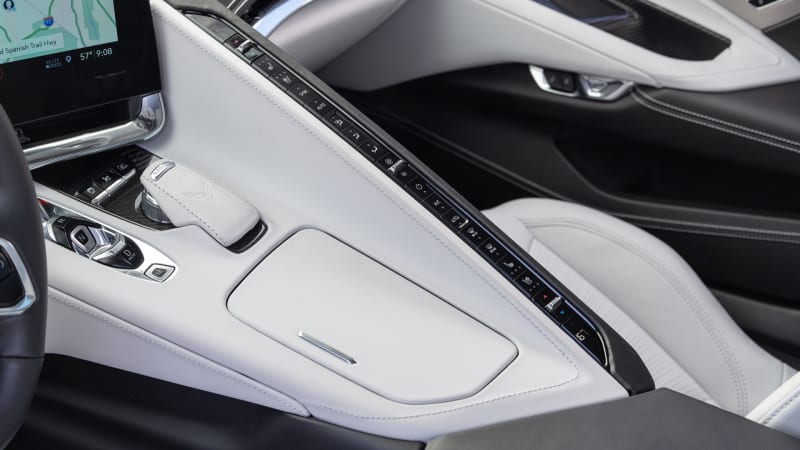 There are a few other odds and ends that should make the C8 competitive beyond its performance and relevant for those outside the typical Corvette-buying realm. GM's latest rear-vision camera is standard and, given the typically terrible mid-engine rear visibility, absolutely necessary. The standard removable roof panel means the Corvette is always a convertible, even if you don't get the actual 2020 Corvette Convertible that will include a now-rare retractable hardtop (it arrives later in the year). The steering wheel can be heated, and all seat options can be heated and ventilated. There are 10- and 14-speaker Bose stereo choices with snazzy metal speaker grilles, the high-resolution touchscreen that controls them is easy to use, the color head-up display is visible through polarized sunglasses, and the 12-inch all-digital instrument display changes its design depending on the drive mode selected. The optional $1,495 front-end suspension lift matches what you can get in a 911, Lamborghinis and other high-end sports cars prone to the ravages of driveways and in-road drainage ditches, but it goes further by uniquely working with the in-car GPS to remember where those spoiler-scraping nuisances are and automatically lifting the next time. If there's a glaring omission, it's the lack of adaptive cruise control as well as forward collision mitigation.

In other words, the expected gizmos are in place, and after spending two days considering the C8 in the fresh light such an entirely fresh take deserves, Chevrolet has indeed created a Corvette that can appeal to those beyond the usual Corvette clientele. Actually, if it's reminiscent of anything, it isn't a previous Corvette, it's the original Acura NSX. That too was a mid-engine sports car, but different than everything else. It had a decently sized trunk, a surprisingly comfortable ride, a unique interior and a price tag that undercut competitors. My head even grazed its roof roll structure, too. Perhaps Corvette loyalists won't like the sound of that comparison, and it's perfectly conceivable they'll prefer the more traditional C7, but for the Corvette to survive to see C9 and C10, pressing the reset button was necessary to draw in new people. Will it and how many? That remains to be answered, but at least the Cosmo's valet stand provides a glimmer of hope.