Our 2019 Subaru Forester long-term tester is rounding second base in its stay at Autoblog’s Michigan HQ, yet the blue-painted, gold-wheeled crossover hadn’t left the Midwest throughout its first six months here, so I sought to change that by taking it down to New Orleans. The goal: Determine if the Forester is a good road trip car. Of course, my girlfriend and I also wanted to go to Mardi Gras, but either way, we were in for some long days of driving.

There are a few umbrella categories a vehicle should excel in to make a vacation and road trip better for all involved. For me, those include comfort, utility and its driver assistance systems.

I was fairly certain this category would be a boon for the Forester going in. It sops up Michigan potholes well, and it did an excellent job on the various road surfaces I encountered on the way to New Orleans, too. Subaru’s passive dampers on the Forester are tuned to make rough roads more livable as opposed to whipping around a highway clover leaf. That makes for soft and rolling eight-plus-hour days behind the wheel.

The cabin at highway speeds was loud, though. A lot of that has to do with the Michelin X-Ice winter tires current fixed, but there's also a noticeable amount of wind noise that follows that. Plus, if you ever need to get going in a hurry, the thrashy boxer-four makes its presence known above all other noises as the CVT pegs the needle near the 6,000 rpm redline. Our Forester has the high-end Harman Kardon audio system equipped, but we still had to jack the volume way up to hear podcasts and quieter music. The cabin noise was never overwhelming, but it did become tiresome after a few hours with this many sounds competing with each other. 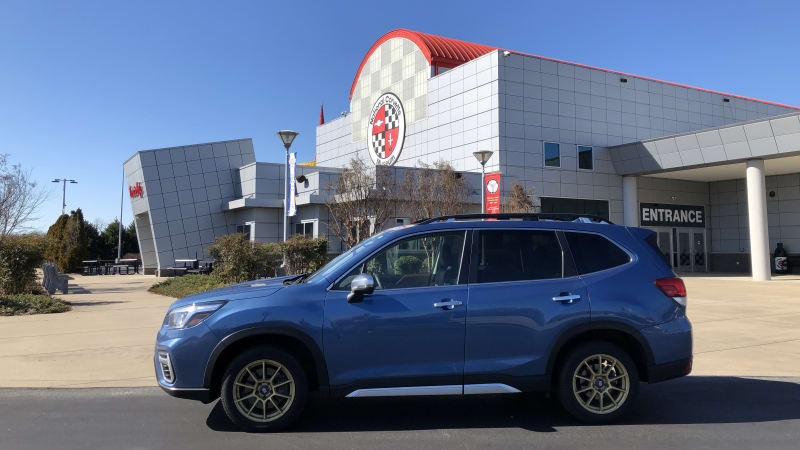 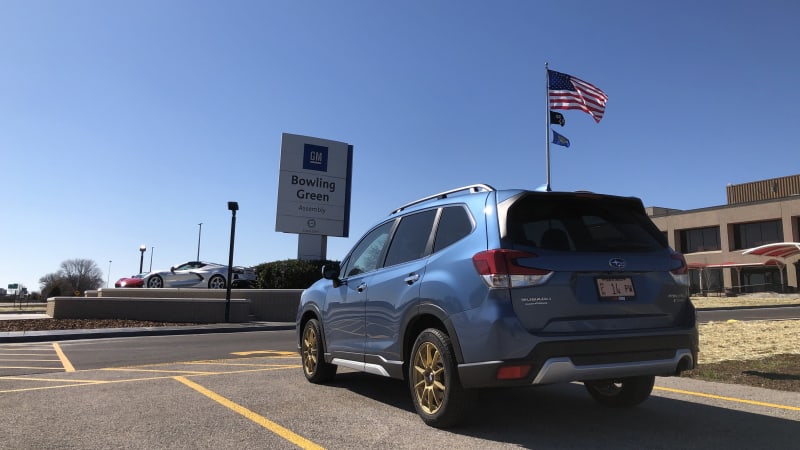 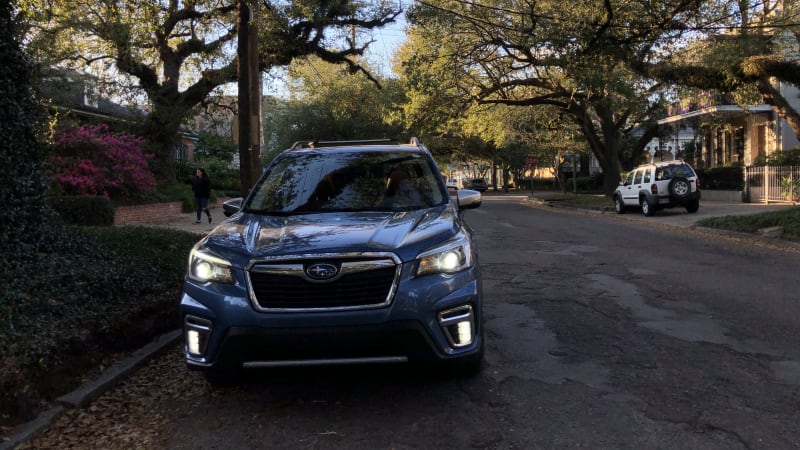 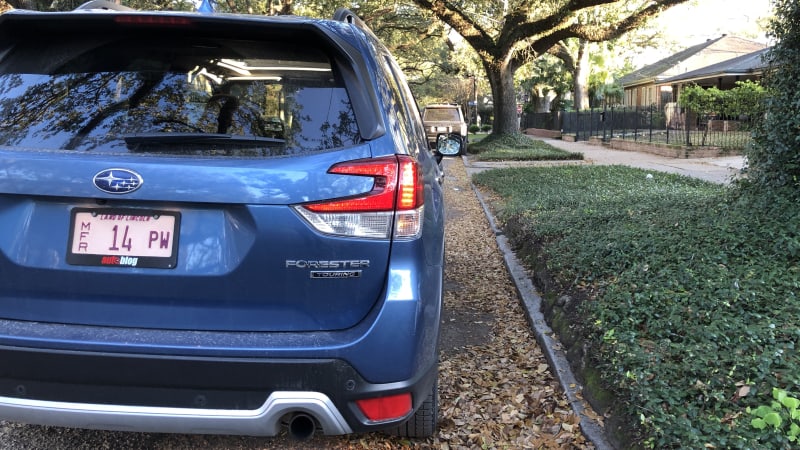 Since we were driving due south or due north, those crosswinds weren’t just audibly annoying. Gusts were plenty capable of blowing the Forester around in its lane due to its tall, upright stance. It’s not like a big panel van, but it was still disconcerting at times.

There were only two of us on this road trip, so the front seats were the only ones in use. I was plenty comfortable for the trip's entirety. The driver seat's electric lumbar adjustability left my back in good shape, and the upright seating position is a bit like sitting in a chair at a kitchen table. The seat’s cushioning was supportive enough to keep me from complaining, but never too stiff so as to be uncomfortable. My passenger, on the other hand, ran out of patience with the passenger seat's lack of lumbar adjustment on the return trip. She resorted to using pillows in various forms to find a comfortable seating position. 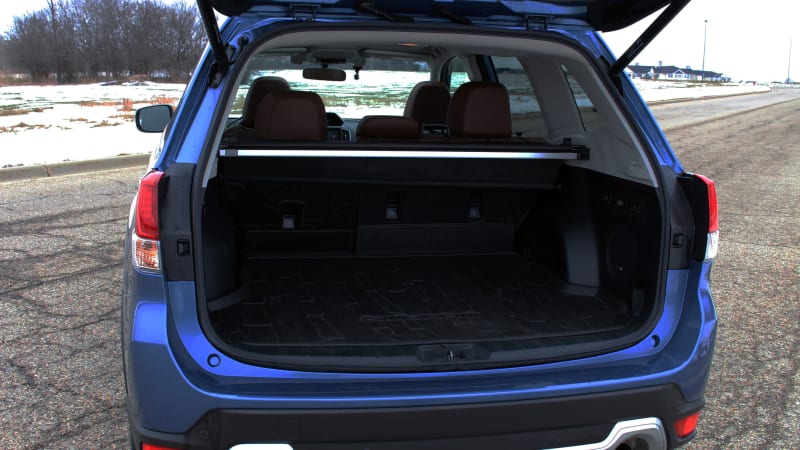 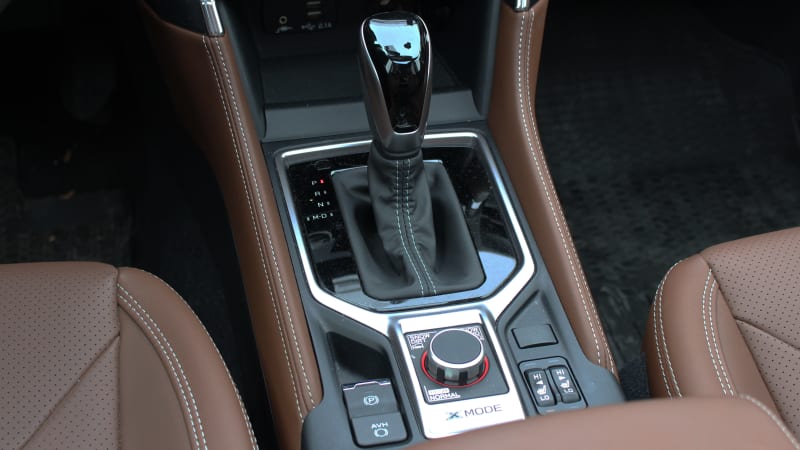 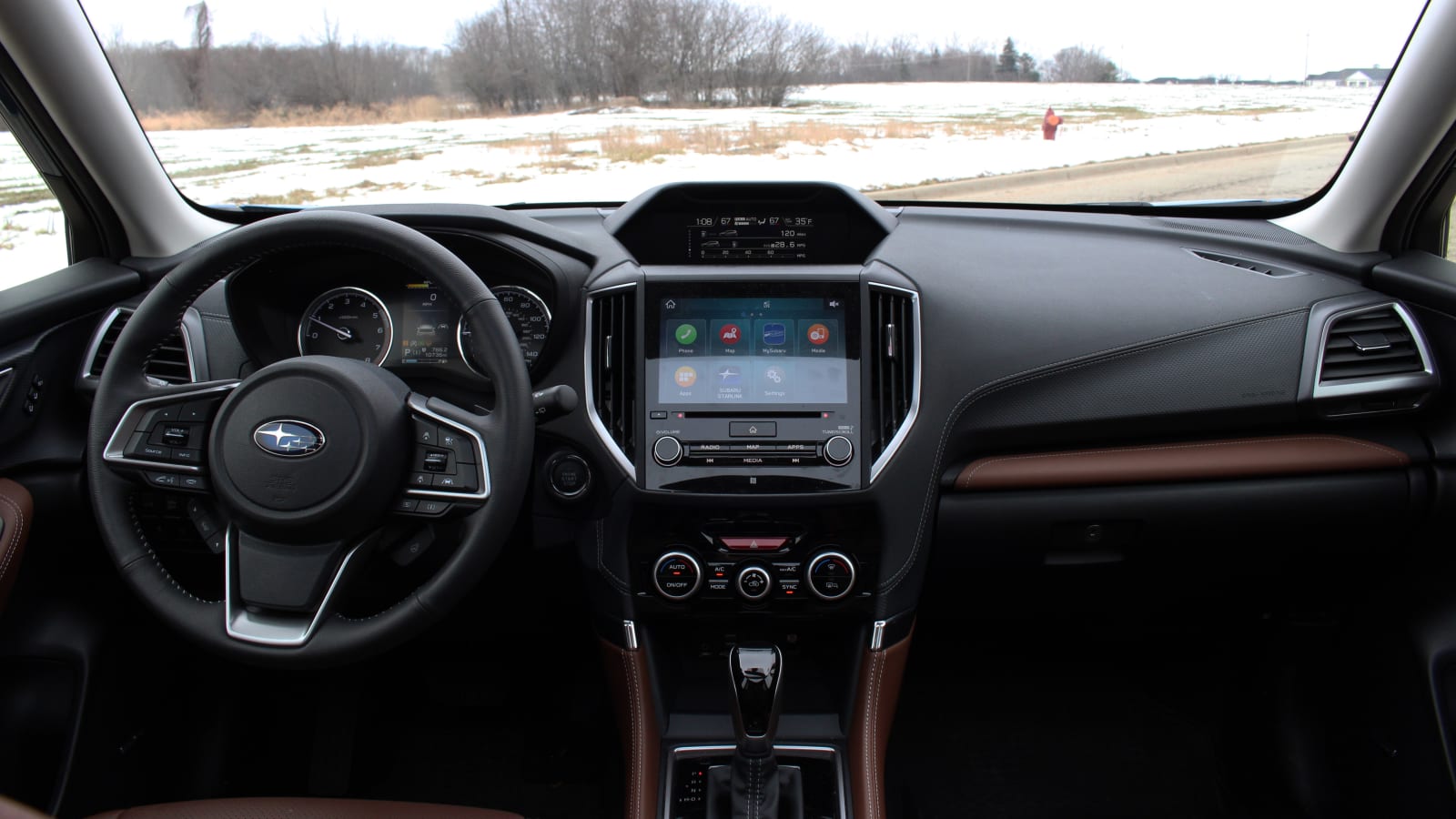 There was excess hatch space for two people for a week-long vacation down south. All of our bags easily fit in the back – look out for a proper luggage test of the Forester in the future. The real test for us was seeing how effective the front seat’s storage solutions worked.

We had three phones, two different phone cord types, two large Nalgene water bottles, two pairs of sunglasses, gum, a purse and a wallet between the two of us. There are two USB-A outlets in the center console, so we each plugged a phone in there. The phones themselves went straight into the cupholders, as the small tray ahead of the gear shifter and below the USB ports won’t hold anything as large as a phone when there’s something plugged into the 12-volt outlet. Additionally, there was no way our Nalgenes were going to fit in the two small cupholders Subaru provides. Instead, those went to the floor on the passenger side. Not ideal, especially when Subaru bills its cars as vehicles to take on adventures. Neither of the door pockets were large enough for our water bottles either, so those become temporary trash/storage bins for receipts and various items along the way. It no big surprise that there’s no room for the Nalgenes, as most vehicles don’t accommodate for the extra wide water bottles.

My wallet and gum went into one of the cupholders that didn’t have two phones in it, and while it didn’t fit perfectly, I was happy to have my pockets empty for the long drive. My girlfriend’s purse was stuck riding in the backseat or the ground on the passenger side – the under-armrest bin wasn’t big enough to fit it. However, the sunglasses holder in the dome assembly up top was large enough to hold both our sunglasses, so those gained safe storage when the sun went away without further cluttering the cabin. We were left with a gaggle of tangling cords around the gear shifter and various items rolling around near my girlfriend’s feet. Doable, but it was … messy.

A dialed-in adaptive cruise control and lane-keeping assist can make highway miles melt away. Our Forester Touring is equipped with the highest level of driver assistance systems available for the model. That means we got adaptive cruise control, lane-keep assist and lane departure warning, among other systems like blind-spot detection and high-beam assist. It also has Subaru’s DriverFocus Distraction Mitigation System that actively monitors the driver.

The Forester’s adaptive cruise control is solid and reliable. It’s not as smooth or fast-acting as some luxury car’s systems (Mercedes, BMW, Audi etc.), but I had no issue setting it and letting the car take it for miles on end. A few traffic jams we got into revealed a couple flaws, though. The system will bring the Forester all the way down to zero, but restarting in stop-and-go traffic is jarring. It accelerates too aggressively from a stop, and this is only amplified by the rocky start-stop system – the whole car shakes aggressively with each startup. You can turn the start-stop system off, but then you lose the minor benefit it provides. 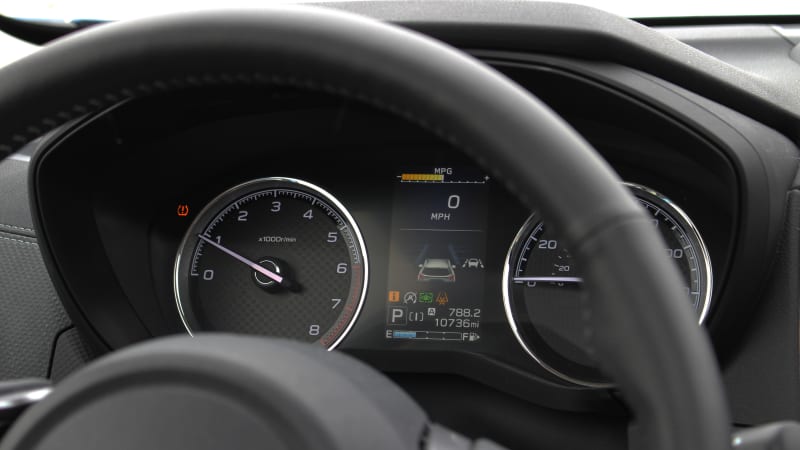 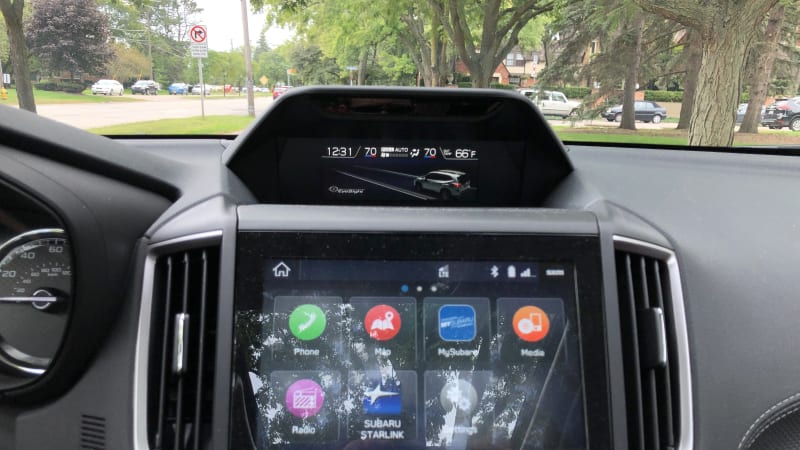 How minor? The Forester’s instrument cluster read out says the engine was off for a total of 49 minutes throughout our trip, saving 0.385 gallon of fuel. I averaged 29 mpg for the trip as a whole, which is spot-on with the car’s EPA combined fuel economy rating. We did a ton of city driving around New Orleans and Nashville, so I’m not surprised to see the final number come in well below the 33-mpg highway rating.

Subaru’s lane-keeping assist is good at recognizing lines, but it doesn’t apply much of any steering force until you’re brushing right up against one. It’s firmly in the camp of lane-keeping as opposed to the cruise control steering assist you get in a Honda CR-V and other vehicles. This goes to show that not all driver assistance systems are created alike, and even if your current car doesn't have such features, know that those more advanced systems can leave you fresher after the end of a long highway drive.

And there's another thing: The Beeps. They never end. After three beeps within the first 10-15 minutes of driving, my girlfriend and I took it upon ourselves to try and count how many times the Forester would beep at us for various reasons on our trip. After about four hours of this and 20-plus beeps later, we gave up. There were just too many to keep track of and retain our sanity. It would beep if I got close to a lane marking, or if the system lost track of the lanes, or if the vehicle at a light in front of me moved a few feet forward, or if it didn’t think I was paying enough attention to the road. This last example proved to be the most frustrating beep of the trip. 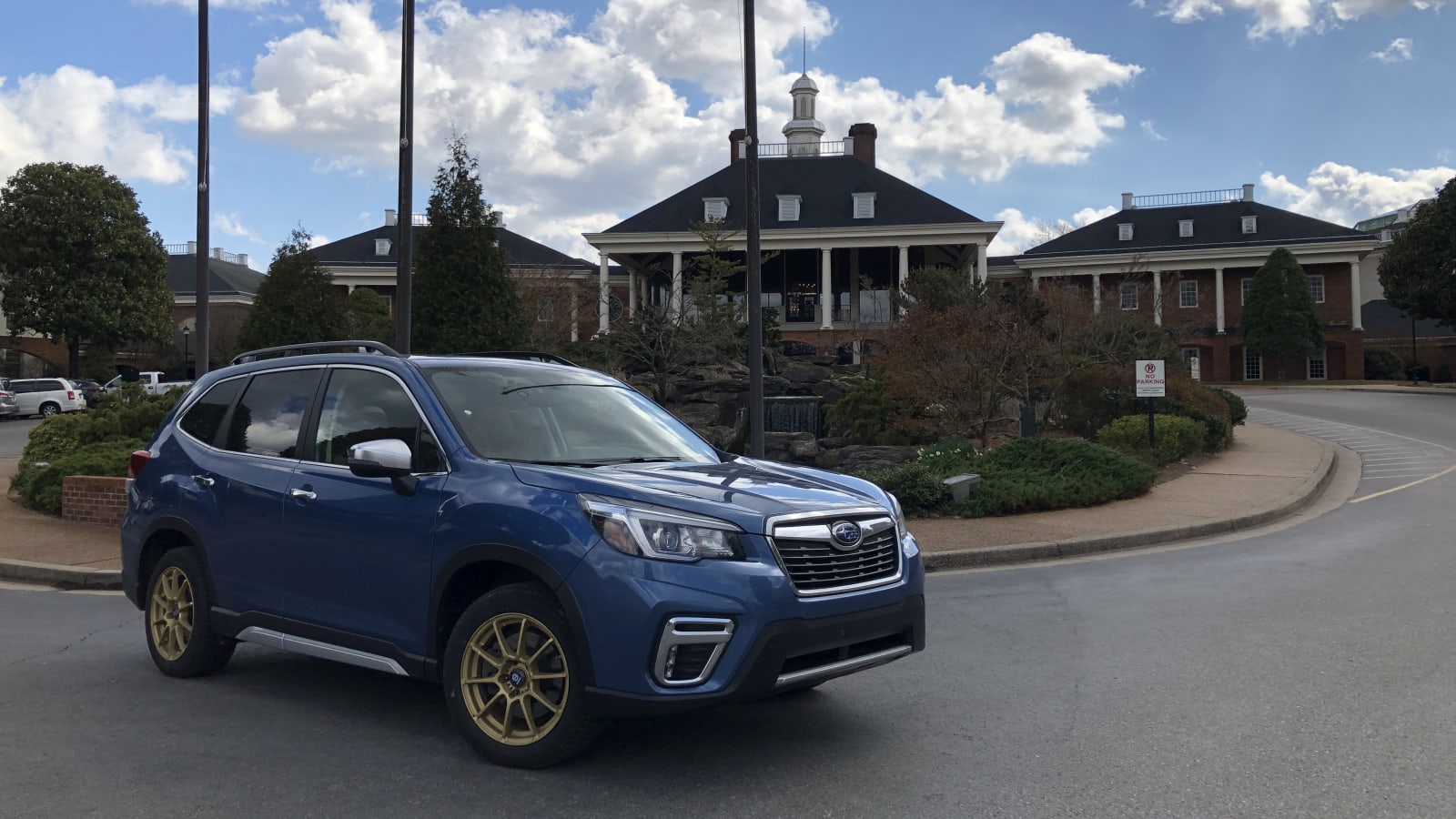 The concept of a driver attention monitor is excellent, so long as it’s good at its job. On many occasions, I would receive the “Keep eyes on road” beep while I was staring dead ahead at the road. I found a shift in head position would set it off, or if I went up to scratch my head with my hand, or adjust my sunglasses, or if the sun was hitting the sensor in the wrong way. At one point I had to just turn the monitor off because the sun was at the perfect angle to directly hit the sensor. The sun made it go all kinds of crazy, dinging incessantly at me, insisting that my attention wasn’t on the road. Of course, my attention was on the road, but I was also mighty distracted by the distraction mitigation system.

The DriverFocus system’s ability to recognize a driver and then adjust the seat to the user’s preset position was useful at valet, though. My seat was all out of sorts when I stepped in from what our hotel’s valet driver set it at, and it returned to my exact preset within seconds of sitting down. A seat memory button could do the same thing, but it’s darn cool to have the car do it all on its own, too.

After pulling back into the driveway in frigid Michigan, I was left with mixed feelings on the Forester’s road trip cred. It excels at being a comfortable and easy-to-drive vehicle, but is tripped up by annoyances like the start-stop system and mixed-bag driver aids. It’s good enough that I wouldn’t hesitate to take the Forester on another long road trip, but it’s no long-haul savant.